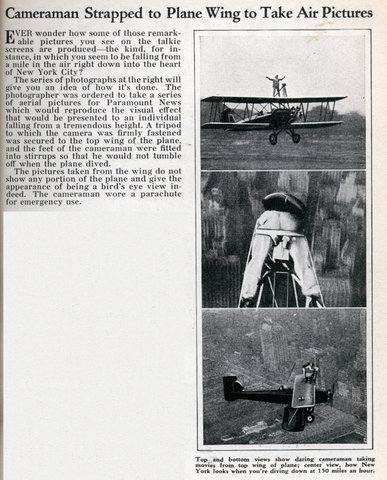 EVER wonder how some of those remarkable pictures you see on the talkie screens are producedâ€”the kind, for instance, in which you seem to be falling from a mile in the air right down into the heart of New York City?

The series of photographs at the right will give you an idea of how it’s done. The photographer was ordered to take a series of aerial pictures for Paramount News which would reproduce the visual effect that would be presented to an individual falling from a tremendous height. A tripod to which the camera was firmly fastened was secured to the top wing of the plane, and the feet of the cameraman were fitted into stirrups so that he would not tumble off when the plane dived.

The pictures taken from the wing do not show any portion of the plane and give the appearance of being a bird’s eye view indeed. The cameraman wore a parachute for emergency use.