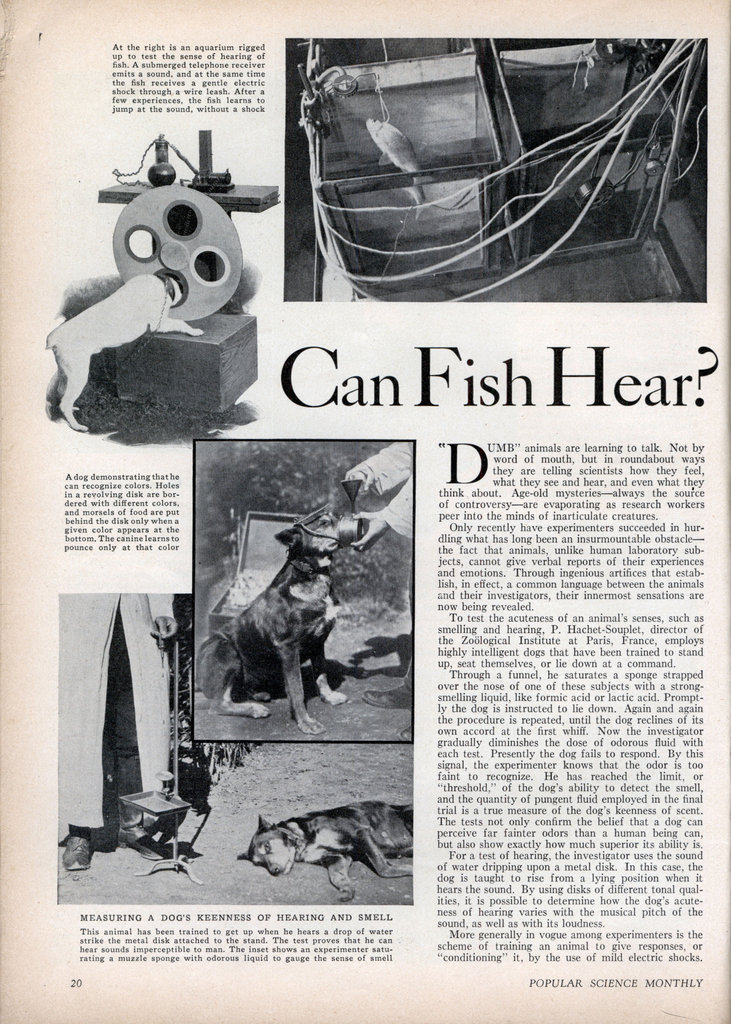 “DUMB” animals are learning to talk. Not by ord of mouth, but in roundabout ways they are telling scientists how they feel, what they see and hear, and even what they think about. Age-old mysteriesâ€”always the source of controversyâ€”are evaporating as research workers peer into the minds of inarticulate creatures.

Only recently have experimenters succeeded in hurdling what has long been an insurmountable obstacleâ€” the fact that animals, unlike human laboratory subjects, cannot give verbal reports of their experiences and emotions. Through ingenious artifices that establish, in effect, a common language between the animals and their investigators, their innermost sensations are now being revealed.

To test the acuteness of an animal’s senses, such as smelling and hearing, P. Hachet-Souplet, director of the Zoological Institute at Paris, France, employs highly intelligent dogs that have been trained to stand up, seat themselves, or lie down at a command.

Through a funnel, he saturates a sponge strapped over the nose of one of these subjects with a strong-smelling liquid, like formic acid or lactic acid. Promptly the dog is instructed to lie down. Again and again the procedure is repeated, until the dog reclines of its own accord at the first whiff. Now the investigator gradually diminishes the dose of odorous fluid with each test. Presently the dog fails to respond. By this signal, the experimenter knows that the odor is too faint to recognize. He has reached the limit, or “threshold,” of the dog’s ability to detect the smell, and the quantity of pungent fluid employed in the final trial is a true measure of the dog’s keenness of scent. The tests not only confirm the belief that a dog can perceive far fainter odors than a human being can, but also show exactly how much superior its ability is.

For a test of hearing, the investigator uses the sound of water dripping upon a metal disk. In this case, the dog is taught to rise from a lying position when it hears the sound. By using disks of different tonal qualities, it is possible to determine how the dog’s acuteness of hearing varies with the musical pitch of the sound, as well as with its loudness.

More generally in vogue among experimenters is the scheme of training an animal to give responses, or “conditioning” it, by the use of mild electric shocks.

This method has the outstanding advantage of being applicable to virtually all kinds of animals. A Russian experimenter, Prof. J. P. Frolov, recently used it to study the hearing of fish!

No organ of hearing has ever been discovered in a fish, he points out, yet a wily fisherman never talks â€¢ while he is fishing. Can a fish really hear?

To find out, he tethered a fish in a small aquarium upon a light, flexible electric wire, with plenty of slack for his subject to swim freely. At the touch of a key, a telephone receiver submerged in the water emitted an audible sound, while the fish simultaneously received a gentle electric shock through its wire leash. It responded with agitated movement. After repeated trials, Prof. Frolov omitted the shock and sounded the telephone signal alone. To his delight, the fish leaped into action as before! Evidently the fish could hear the sound, had learned to associate it with receiving an electric shock, and jumped even when no shock was forthcoming. Even the ringing of a bell suspended above the water proved audible to a fish in further tests.

As universal as dislike of an electric shock, in the animal kingdom, is the desire for food, and this affords still another way of plumbing the minds of animals.

That apes rival human beings in ability to distinguish colors was demonstrated by the late dean of Russian psychologists, Prof. Ivan P. Pavlov, who trained a monkey to climb down from its perch for food when he displayed a red disk as a signal. Raising a blue disk brought no response, for the monkey had learned that no food would be forthcoming. Similar tests show that dogs, cats, fish, and guinea pigs can tell the difference between different hues. The director of the Paris zoo found it possible to train a dog to seize a morsel of food, placed behind a slowly revolving disk with four holes rimmed in different colors, only when an aperture of a certain color came into position.

Can animals reason, as human beings do? Again, their ingenuity in seeking food supplies the test. The French experimenter demonstrates the intelligence of a beaver by hanging a can of grain above its reach, with a cord anchored at the floor. Soon the beaver learned to gnaw through the cord so that the can would fall and spill, providing a feast.

It is methods such as these that permit animals to serve as subjects for practical medical research.