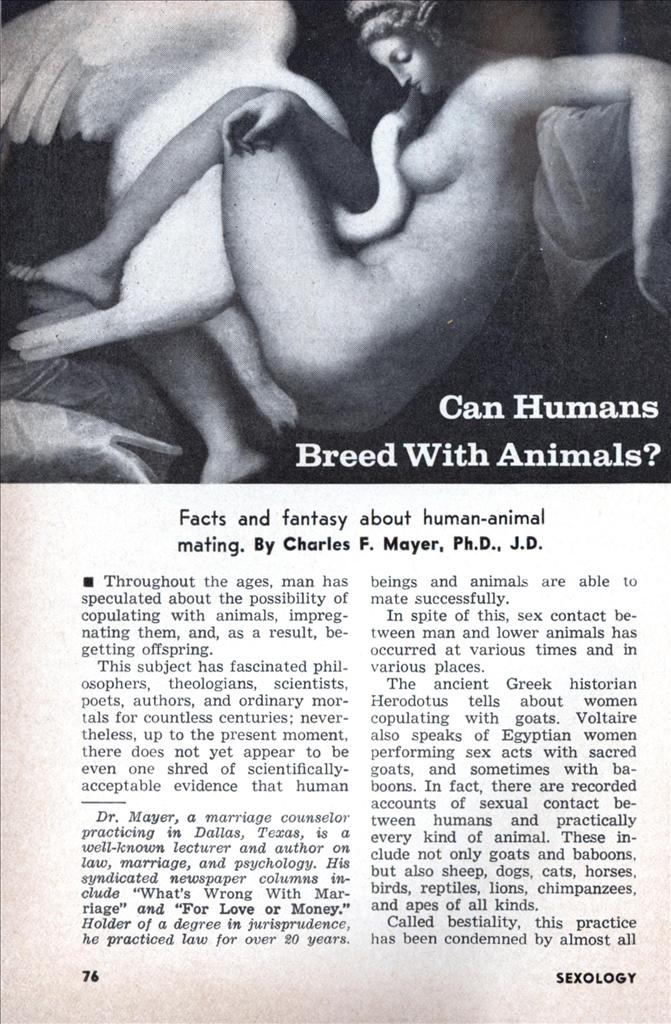 Can Humans Breed With Animals?

Facts and fantasy about human-animal mating.

Throughout the ages, man has speculated about the possibility of copulating with animals, impregnating them, and, as a result, begetting offspring.

This subject has fascinated philosophers, theologians, scientists, poets, authors, and ordinary mortals for countless centuries; nevertheless, up to the present moment, there does not yet appear to be even one shred of scientifically-acceptable evidence that human beings and animals are able to mate successfully.

In spite of this, sex contact between man and lower animals has occurred at various times and in various places.

The ancient Greek historian Herodotus tells about women copulating with goats. Voltaire also speaks of Egyptian women performing sex acts with sacred goats, and sometimes with baboons. In fact, there are recorded accounts of sexual contact between humans and practically every kind of animal. These include not only goats and baboons, but also sheep, dogs, cats, horses, birds, reptiles, lions, chimpanzees, and apes of all kinds.

Called bestiality, this practice has been condemned by almost all religions and legal codes. Moreover, the penalties were at one time extremely severe.

For instance, the Old Testament decrees the death penalty (by stoning) for animal sex contacts. Later on, Christianity adopted the same harsh attitude toward sexual contact between humans and animals, except that, during the Middle Ages, executions were usually by burning instead of stoning.

Incidentally, not only did the authorities execute the guilty humans, but the animals involved were also executed.

The records reveal an interesting exception in which, although the man was executed, the animal was acquitted. In 1750, one Jacques Farron was convicted and hanged for having intercourse with a female donkey. But, when it came to the fate of the hapless donkey, several character witnesses appeared in her behalf. These witnesses included not only several respectable citizens of the community, but even the abbot of the local monastery.

The gist of their testimony was that they had known the donkey for many years and that she had always behaved herself virtuously and in every respect as a good donkey should. On the basis of this evidence, the court acquitted the donkey, declaring that the poor animal obviously must have been raped!

In an earlier case in 1539, one Guillaume Gamier confessed to committing sodomy with a “she-dog.” Not only were he and the dog burned to death, but the judge even ordered the records of the trial burned, giving as his reason that “they were too horrible and potentially dangerous to be permitted to exist.”

Not only males, but females also have been put to death for the crime of bestiality. In 1601, the defendant was a young girl of 16 who was convicted of copulating with a dog. Here the court assessed a triple punishment for both the girl and the dog: first, they were hanged; then they were further strangled; and lastly, they were burned.

In modern times, bestiality is still practiced. The Kinsey Institute studies revealed that it is now pursued mainly in rural areas.

Despite the absence of any scientific proof, great numbers of people still cling to the deep-rooted belief that humans can breed with animals and produce offspring. Actually no such breeding is possible between 2 different species. Apparently, what has kept alive the belief that humans may be able to fertilize animals or that animals may be able to fertilize humans is the abundance of folklore, superstitions, legends and myths on the subject.

Roman and Grecian mythology is especially rich in such myths, the most familiar of which is the Greek legend of Leda, who is said to have produced her beautiful daughter, Helen, after intercourse with Zeus in the shape of a swan.

And, of course, there are the innumerable mythical monsters mentioned in the folklore of ancient peoples: centaurs, fauns, the minotaur, sphinxes, mermaids, etc. Each one of these is described as part human and part beast, presumably spawned by a human-animal sexual relationship.

The centaurs, dwelling in the mountains of Thessaly, were half men and half horse. They were said to be descendants of Ixion. The faun is a god of fields and herds. He is usually represented as having human shape, with pointed ears, and small horns. Sometimes, however, the faun has a goat’s tail, and is shown as half goat and half man. Satyrs are similar.

The sphinx, famed in Greek and later in Egyptian art and mythology, is typically shown with the body of a huge lion, winged, and with the head and bust of a woman. The most famous sphinxes, of course, are the well – known riddle-maker at Thebes and the great Egyptian statue.

Mermaids are also fabled creatures. The upper portions of their bodies are typically represented as being like a woman’s, and the lower portions like that of a fish. Many of these mermaids are called sirens, who sexually attract passing seamen, and then lure these victims to their doom.

In seeking reasons for the widespread belief in the plausibility of human-animal breeding, we cannot ignore the subject of monstrous births, or what is technically termed by physicians as teratology. Today, we know that two-headed infants, Siamese twins, children with monstrous heads, even such misshapen, malformed bodies which appear to resemble animals, are merely mistakes of nature in purely human births.

It is very likely that in ancient days, many of the monstrous births which resulted in 1962 from the mothers’ use of the drug thalidomide during pregnancy, would have been ascribed to sexual relations with animals. Children born with only stumps for hands and feet could certainly be put in that category.

In spite of all the myths and legends, modern investigations have proved beyond a doubt the sterility of sexual connections between man and beast. We can only wonder at the simple credulity and the imaginative minds of our ancestors.

A recent book on bestiality cites a 1932 report that a team of Russian scientists, headed by Dr. Elie Ivanoff of Moscow, were engaged in experiments—attempting to breed men with apes—by means of artificial insemination only, however. The Russian scientists were hoping to be able to display to their colleagues and the world “a complete chain of specimens from the perfect man back to the perfect anthropoid.” Inasmuch as we have heard no further word on these experiments in almost 30 years, we can only assume that they have failed in their efforts.

Thus, in spite of all the circumstantial evidence of monstrous births, the various creatures of mythology, the many legends and superstitions which have been current, we must, nevertheless, conclude that the possibility of man breeding with animals still runs contrary to all the laws of nature and any of the facts known to science.

——————–
Dr. Mayer, a marriage counselor practicing in Dallas, Texas, is a well-known lecturer and author on law, marriage, and psychology. His syndicated newspaper columns include “What’s Wrong With Marriage” and “For Love or Money.” Holder of a degree in jurisprudence, he practiced law for over SO years.