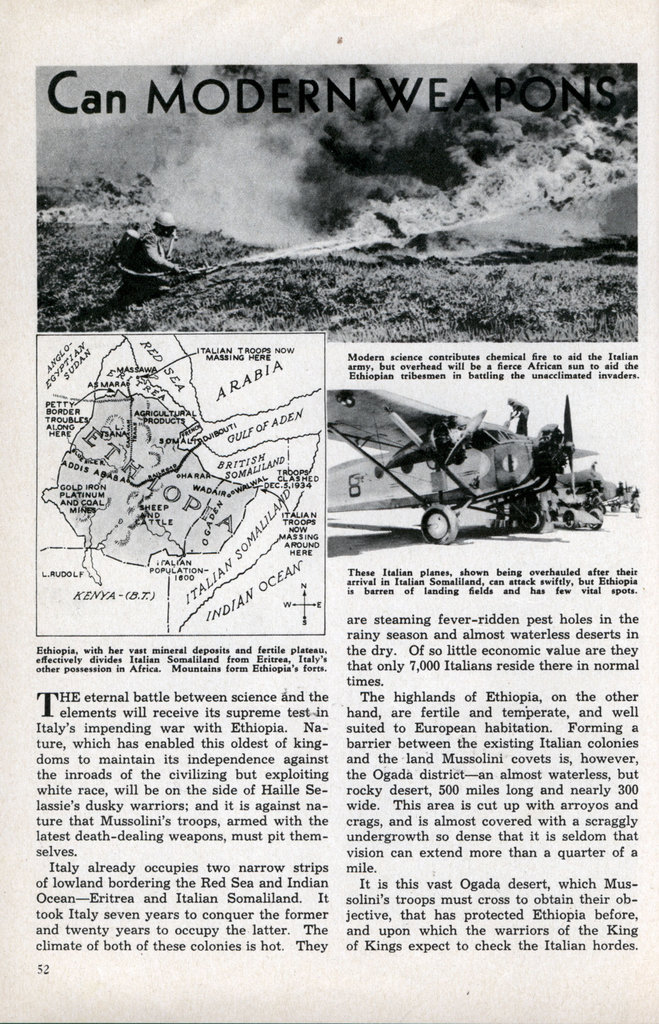 THE eternal battle between science and the elements will receive its supreme test in Italy’s impending war with Ethiopia. Nature, which has enabled this oldest of kingdoms to maintain its independence against the inroads of the civilizing but exploiting white race, will be on the side of Haille Selassie’s dusky warriors; and it is against nature that Mussolini’s troops, armed with the latest death-dealing weapons, must pit themselves.

Italy already occupies two narrow strips of lowland bordering the Red Sea and Indian Oceanâ€”Eritrea and Italian Somaliland. It took Italy seven years to conquer the former and twenty years to occupy the latter. The climate of both of these colonies is hot. They are steaming fever-ridden pest holes in the rainy season and almost waterless deserts in the dry. Of so little economic value are they that only 7,000 Italians reside there in normal times.

The highlands of Ethiopia, on the other hand, are fertile and temperate, and well suited to European habitation. Forming a barrier between the existing Italian colonies and the land Mussolini covets is, however, the Ogada districtâ€”an almost waterless, but rocky desert, 500 miles long and nearly 300 wide. This area is cut up with arroyos and crags, and is almost covered with a scraggly undergrowth so dense that it is seldom that vision can extend more than a quarter of a mile.

It is this vast Ogada desert, which Mussolini’s troops must cross to obtain their objective, that has protected Ethiopia before, and upon which the warriors of the King of Kings expect to check the Italian hordes.

This country is absolutely without roads, railways, or water transportation, while every bush and rock can shelter a brown-clad Ethiopian. It was on this craggy plateau that Menelik massed 150,000 warriors to completely annihilate an Italian army of 12,000 at Adowa in 1896.

The Ethiopians are not organized as are European armies. Each tribal chieftain furnishes his own warriors upon call from Haille Selassie who can legitimately call himself the King of Kings because these minor kings accept him as their leader. Practically every man of the 3,000,000 Amharas is a fighter by choice and by habit, for the keeping of the seven million negroes and other lowland tribes in subjugation has given them continuous practice. These Amharas are of the Semetic race, closely allied to the Arabs and Riffs, long noted for their valor and love of independence. Every man has possessed firearms from his earliest childhood, and all are expert shots, with the frontierman’s ability to find cover and to shoot only when every shot will be a hit. About 50,000 of the best of these have been trained in the use of modern weapons by Belgian officers.

The problem of supply for the Ethiopians will be minor. Operating in friendly territory, used to living on rations so meager that a European soldier would starve, eating his meat raw from choice, and with his women folks packing the few necessities on the family mule, the Ethiopian army will be absolutely independent of a line of communications, and will thus possess a mobility impossible to a modern army.

The Italian army, on the other hand, will be pitifully dependent upon keeping an unbroken line open to the rearâ€”from the firing line to Italy. Food, clothing, ammunition, medical supplies, and even water, will have to be transported by truck, wagon or mule back. The farther the Army advances the more precarious will this problem become. A sudden raid behind the main body of the army, cutting off its food and water supply for even a few days, would mean suffering and death to thousands.

Much has been made of Italy’s threat to spread irritating gas on the ground over which the barefooted Ethiopian soldiers must pass. Such gasses, however, bar the immediate use of the contaminated ground to one side as much as the other; and since Italy is waging an offensive rather than a defensive war, it is the Italian troops which must advance to attain their objective. The slowly retreating Ethiopians could cause much more suffering by poisoning the few water holes as they fell back.

Italy has one of the most efficient air forces in the world, but aside from reconnaissance and the directing of artillery fire, there is little it can do.

It is true that Addis Ababa and Harar can be bombed, but they contain no vital industries, few important buildings, and are not great centers of communications. The bombing would be a nuisance, but of no military importance.

The machine-gunning and short-range bombing of massed troops by attack planes during an actual assault would be effective, as the Marines proved in Nicaragua; but air fields will have to be constructed rapidly as the Italian army advances.

An ambush by moonilght, such as the Ethiopians staged at the Adowa debacle, would prevent the effective use of this phase of aviation and the Ethiopians are likely to go in for night attacks, for the Italians must march at night if they hope to prevent excessive casualities from the terrific heat. Long practice in dawn slave raids have made Haille Selassie’s warriors adept at night fighting.

An attempt to use tanks will be made at first, but as the interior uplands are approached only mules and men on foot can negotiate the rocky defiles.

Heavy artillery cannot be used effectively against an enemy who has no permanent fortifications, railheads, or ammunition dumps. Light mountain field pieces, machine guns, and efficient rifles will be the only effective superiority the Italian army will possess in armament.

If the King of Kings capitulates, Italy’s task will be far from finished. She must not only conquer a million fighting men who have never known subjugation, but she must subdue nature.