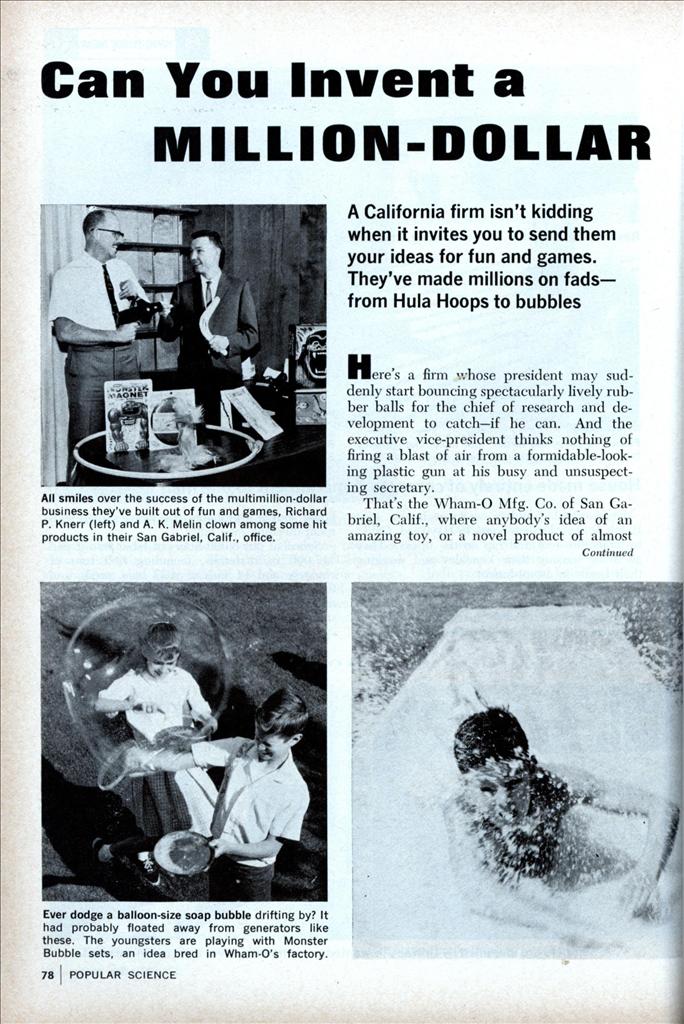 Can You Invent a MILLION-DOLLAR FAD?

A California firm isn’t kidding when it invites you to send them your ideas for fun and games. They’ve made millions on fads— from Hula Hoops to bubbles Here’s a firm whose president may suddenly start bouncing spectacularly lively rubber balls for the chief of research and development to catch—if he can. And the executive vice-president thinks nothing of firing a blast of air from a formidable-looking plastic gun at his busy and unsuspecting secretary.

That’s the Wham-O Mfg. Co. of San Gabriel, Calif., where anybody’s idea of an amazing toy, or a novel product of almost any sort, has a chance to become a reality and be sold by the millions.

Fun is their business, and they’re as interested in your idea of fun as in their own. Mail, phone, telegraph, or carry it to their threshold on El Monte St., and you will receive a warm welcome. In fact, the welcome may eventually be followed by royalties. That has been the happy fate of quite a few inventors to date. They’ve included house painters, brickyard workers, school kids, bank presidents, aircraft engineers, retired clerks, and upholsterers—to name just a few.

Though you may never have heard of Wham-O before, you doubtless are already acquainted with Super Ball, their latest sensation. It’s about the size of a handball, and has such extraordinary bounce thai it makes every other ball seem tired. It falls just short of perpetual motion. Kids from seven to 70 can be seen dribbling it or whamming it over the rooftops almost anywhere you go these days.

Or maybe you’ve frustrated your youngsters by appropriating their Frisbee Flying Saucer and coltishly skimming it over the lawn. Or, at the very least, you used to sheepishly sashay around inside a Hula Hoop.

Those outstanding fun fads all stemmed from the Wham-O Mfg. Co., which turned them out by the tens of millions. But the ideas for all three came from outsiders.

The high-bouncer. Super Ball, for instance, was the inspiration of a chemist, Norman Stingley, who worked for another firm—and still does, though he picks up fat royalty checks regularly.

“It took us nearly two years to iron the kinks out of Super Ball before we produced it,” said Richard Knerr, 40, president of Wham-O. “It always had that marvelous springiness—a 92-percent recovery rate —far beyond that of any other ball. But it had a tendency to fly apart. We’ve licked that with a very-high-pressure technique for forming it. Now we’re selling millions.” Stingley is said to receive a royalty of around a cent on each.

The Frisbee Flying Saucer was the inspiration of a building inspector, a former Air Force pilot. It’s just a shallow plastic saucer with an airfoil edge that will boomerang or sail and hover, depending on how you skim it. The Frisbee Flying Saucer still have an idea—no matter how nutty it seems to them—to send it to us. Maybe we’ve got an application for it. We don’t just make toys, you know, even though they’re our principal line. We’re branching out in a lot of ways, even into housewares and cosmetics.”

“Who does the initial screening of this flood of suggestions?” I asked.

“Ed Headrick—he’s in charge of research and development.”

Headrick says, “We average 20 new ideas in the mail every day. If there’s any publicity about us, the number shoots up to 50 or 100 or 150. Too many people, though, think we’d be interested in reviving some toy they used to play with as kids. That’s not true. We want the new and different.”

“What’s the percentage of good ideas in a carload?” I asked.

“Well,” said Headrick, “we have to review, say, 100 just to find one that even has interest. We have to look at 1,000 before we turn up one that seems worth the cost of testing. We have to run through 50 to 100 tests of different ideas before we come up with something as good as Super Ball. And all the time, of course, we’re developing ideas of our own—the whole company is attuned to that.”

Keeping it bouncing. “Speaking of Super Ball,” I said, “I note that you say it’s ‘made of new, amazing Zectron.’ What’s that?”

“It’s a secret mixture of man-made materials,” Headrick told me, “but the name Zectron doesn’t mean a thing—it just sounds zingy, and Super Ball is certainly that.”

“Have you ever had a flop?” I asked Knerr.

“Oh, sure,” he said. “We’re not perfect. Take Instant Fish, for example. We had the idea of marketing fish eggs that would hatch before the astonished eyes of people who bought them and put them in bowls of water. We’re always seeking what we call ‘the magical degree of amazement’ in our products. We want people to exclaim, ‘What was that?’ or ‘Gee, I never saw anything like that before.’ And we want to appeal to all ages and both sexes.”

“What was wrong with Instant Fish?” I asked.

“Oh, we got a ton of orders, and then found that the fish had let us down. They just wouldn’t lay eggs fast enough to make the project profitable.”