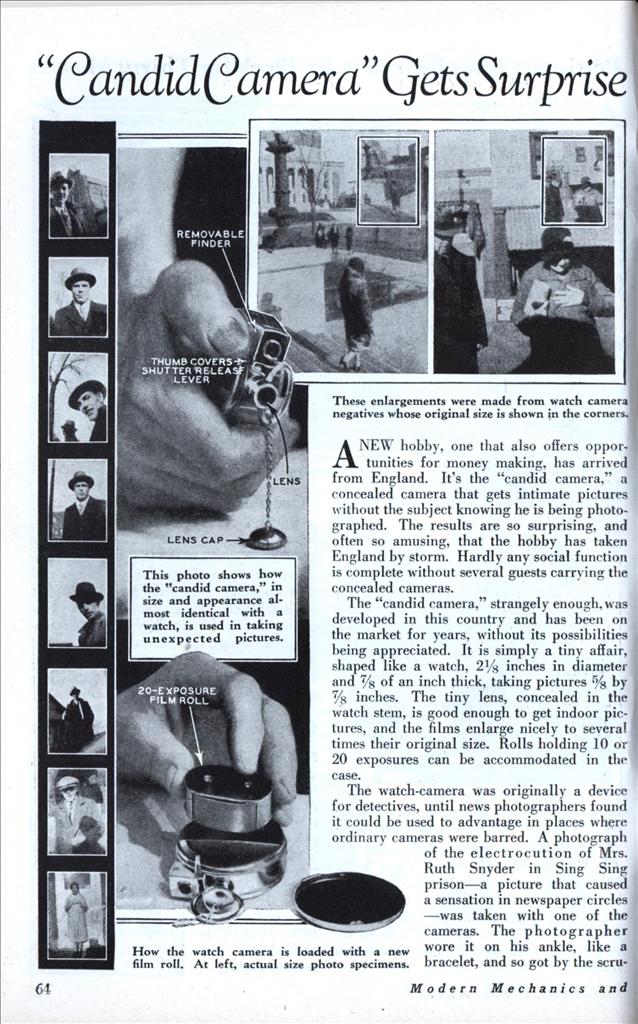 A NEW hobby, one that also offers opportunities for money making, has arrived from England. It’s the “candid camera,” a concealed camera that gets intimate pictures without the subject knowing he is being photographed. The results are so surprising, and often so amusing, that the hobby has taken England by storm. Hardly any social function is complete without several guests carrying the concealed cameras.

The “candid camera,” strangely enough, was developed in this country and has been on the market for years, without its possibilities being appreciated. It is simply a tiny affair, shaped like a watch, 2-1/8 inches in diameter and 7/8 of an inch thick, taking pictures 7/8 by 5/8 inches. The tiny lens, concealed in the watch stem, is good enough to get indoor pictures, and the films enlarge nicely to several times their original size. Rolls holding 10 or 20 exposures can be accommodated in the case.

The watch-camera was originally a device for detectives, until news photographers found it could be used to advantage in places where ordinary cameras were barred. A photograph of the electrocution of Mrs. Ruth Snyder in Sing Sing prison—a picture that caused a sensation in newspaper circles —-was taken with one of the cameras. The photographer wore it on his ankle, like a bracelet, and so got by the scrutiny of the guards who were looking for cameras. In the death chamber he crossed his legs, pulled up his trousers a bit, and proceeded to shoot pictures of the scene.

A favorite trick with newspaper photographers in court rooms and other places where cameras are barred is to make a small hole in a hat, and then hold it on the lap, with the camera inside. A view finder, which comes with the camera, is detachable, and with practice it can be aimed like a revolver. The film winding device gives an audible click each time a new film is wound into place, so an entire roll can be shot without looking at the camera.

Another camera particularly adapted for taking out-of-doors pictures without the knowledge of the subject is a German importation, with a fine Carl Zeiss lens. It is disguised to look like a prism field glass, but the objective lens is merely a blind, and the eye piece is part of a prism finder. When it is held to the eye you apparently are looking off in the distance, but actually are seeing objects and persons standing off at one side. Pressing a button opens a door in the side of the instrument and trips the shutter. A film pack is fitted into a flat space on the opposite side of the case. Owing to the excellent lens the camera works up to 1/300th of a second, permitting its use indoors, if you can find some excuse for using a field glass in the house.

The “candid camera” hobby got its start in England a few months ago when a photographer shot unexpected pictures of Queen Mary.