“Yessir, I’m just going to sit up here on the roof with my nice new telephoto rifle-cam and get some great candid snapshots of the President’s motorcade.” 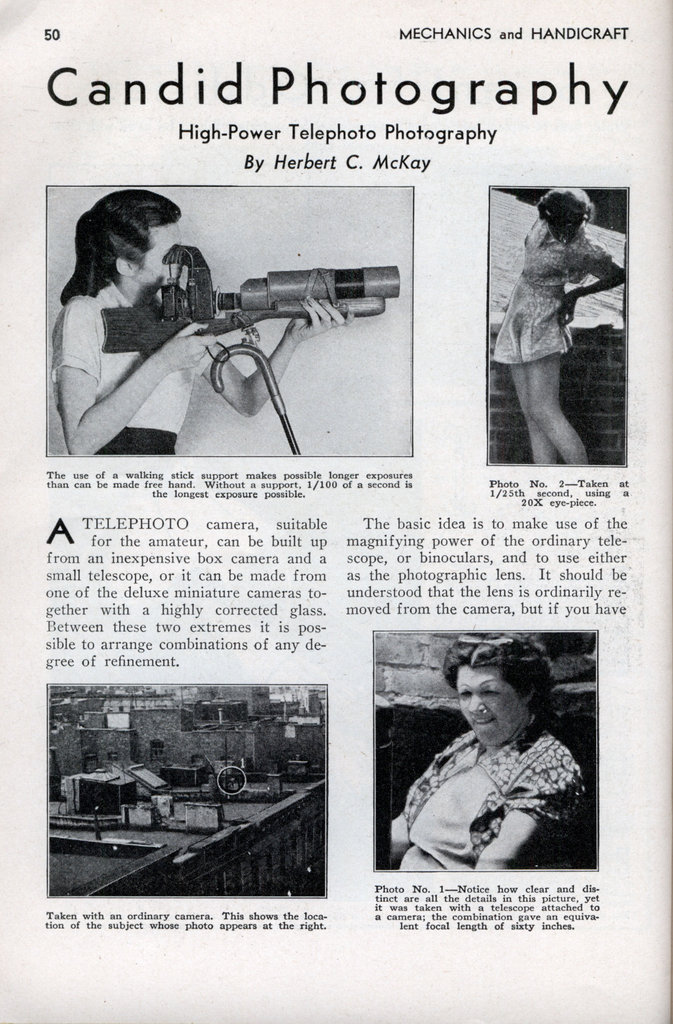 A TELEPHOTO camera, suitable for the amateur, can be built up from an inexpensive box camera and a small telescope, or it can be made from one of the deluxe miniature cameras together with a highly corrected glass. Between these two extremes it is possible to arrange combinations of any degree of refinement.

The basic idea is to make use of the magnifying power of the ordinary telescope, or binoculars, and to use either as the photographic lens. It should be understood that the lens is ordinarily removed from the camera, but if you have only one camera from which the lens is not removable, it is perfectly practical to make use of your equipment, merely setting the opera glass in front of your camera lens.

It is assumed that when any kind of an optical instrument is used, all of the focusing is done by the instrument and that the natural accommodation of the eye is not used. It is also assumed that the normal eye, when at rest, is focused upon “infinity”‘ and that an image will be formed by the eye focused at infinity just the same as a similar image would be formed by a camera focus at infinity. If this condition of natural rest is obtained, and all of the focusing accomplished by means of the telescope or binoculars then, when the binoculars or telescope is so focused, it, too, will be focused for infinity.

If any optical instrument is focused at infinity, the emerging rays are assumed to be parallel. When a camera is “focused at infinity, it is assumed that the rays falling upon the lens are parallel and are brought to a focus at the film. Therefore, if an instrument, such as the telescope, is focused for infinity, and is emitting parallel rays, these same parallel rays can be picked up by the camera lens focused for infinity and brought to a sharp image on the film. The practical application of this principle has been demonstrated repeatedly, particularly in the making of photographs with a microscope. The practice of focusing a microscope with the eye at rest and then making pictures with an ordinary camera, focused for infinity but placed immediately above the eyepiece of the microscope, is so satisfactory that coupling devices are sold commercially for making photomicrographs in exactly this manner.

If this can be done with a microscope, it should be possible with such an instrument as the telescope, and experiment will show that this is perfectly feasible. Therefore, if the telescope is focused in such a manner that the image is perfectly sharp without any accommodation on the part of the eye, that is, without any feeling of strain whatsoever, and then the camera, focused for infinity, is placed immediately behind the telescope eyepiece, an exposure will result in a negative whose definition is quite satisfactory for photographic purposes. It is true that negatives ordinarily obtained in this manner are not sufficiently sharp for extreme enlargement, that is, enlargements of 10 diameters or more, such as is common in miniature camera work, but they will be quite satisfactory for making contact prints or enlargements on the order of 2-1/2 to 3 diameters.

When the camera is of a type in which the lens is easily removable, it is sometimes more satisfactory to dispense with the camera lens and make use only of the telescope itself. Of course, it is understood that any reference to a telescope also includes the use of one side of a pair of binoculars, or field glasses. When this is done, it necessitates the use of the ground glass for focusing the camera, or for some other visual means of accomplishing the same results. The accessory devices supplied for some of the better known miniature cameras, in which a focusing screen and the camera are rapidly interchangeble in position, will be found quite satisfactory for this type of work.

While any form off telescope which will give a sharp and brilliant image can be used with quite satisfactory results, the experiments upon which the information in this article were based, were performed by using a rifle – range telescope of the prismatic type in conjunction with a miniature camera. In order to prove the practicability of less expensive equipment, after the data had been assembled, some of the experiments were repeated, using a two-dollar box camera and an amateur telescope whose retail value was perhaps seven or eight dollars. The inexpensive equipment was not as convenient in operation as the original experimental equipment, but the results obtained were highly satisfactory. Therefore, while the material presented was derived from the use of the more expensive equipment, it must not be assumed that such equipment is essential for success in this work.

It is necessary that the camera and the telescope be provided with a common base so that they will be kept in proper alignment. This base may take the form of an optical bench, or it may be a wooden stand which is placed upon a table (although this limits the range or usefulness of the equipment) or perhaps the most practical of all, the telescope and camera may be coupled upon a rough support copied from a gun stock.

It is not necessary to have a finely finished stock for this purpose, although, of course, for permanent equipment, this is desirable.

One of the illustrations show a support of this type which was hurriedly whittled out of a piece of 2″ x 4″ pine in about half an hour. This type of support permits sufficient free hand steadiness to get sharp pictures with an exposure on the order of one to two hundredth seconds. Because of the extremely high magnification of the telescope, the slightest movement of the equipment will result in a blur. It is well known that the average miniature camera usually will not provide a good sharp negative if the free hand exposure has been longer than 1/50 second. It is also recognized that with a lens of only four times normal focal length, the free hand exposure is reduced to about .02 to .01 second, assuming the negative must be good enough for a 10-diameter enlargement The two facts, that the telescope combination is not supposed to provide for greater than about 5-diameter enlargements and that the shoulder support gives a much greater degree of steadiness, permits a minimum exposure pi .02 second with this outfit. However, it is desirable to use the fastest film available so that under bright sunlight conditions, exposures on the order of .05 second may be given.

In estimating the amount of magnification provided by the telescope, the rated power of the instrument does not provide any definite guide. The only relationship of any value to the amateur photographer is that between the size of the image obtained with the telescope and the size of the image obtained with the normal lens of the camera. Thus, it will be found that in the case of a miniature camera using a 2″ lens, the magnification will be greater than the rate of power of the instrument, while in the case of a camera normally using a lens of from 4″ to 7″ focal length, the magnification of the telescope will be less than its rated power. The greater the distance from the eyepiece to the film of the camera, the greater will be the enlargement, of course; but this enlargement is of no value, because any errors existing will be magnified by the enlargement of the image, hence it is better to get such enlargements by projection of the negative rather than to attempt to make too large a negative to start with. Moreover, by using a longer extension bellows on the camera and getting a larger original image, the brilliance of the image will be so reduced that the increase in exposure will extend beyond practical limits.

For example, in using the telescope in combination with the Contax and having an ocular lens in the telescope, giving the instrument approximately a 20-time visual magnification, the image produced was 44 times as large as that produced by the 2” lens normally used on this camera. It must be remembered that in any work of this kind, the expression “time” does not refer to area but to linear dimension. This means that an object which appears to be only 1/44 of an inch high with a normal lens, or practically invisible, would be rendered a full inch in height by the telescope. The longest camera lens made for such a camera has a focal length 10 times normal so that the image formed by it would be approximately 1/5 of an inch in height (or a little less), as compared with the 1″ size normally given by this combination. As a result, it can be seen that the telescope used in this manner, is equivalent to a lens whose focal length is 220 centimeters or 2 2/10 meters. This is almost exactly equivalent to 8 feet. If we assume that the diameter of the objective lens of the telescope is its aperture (and this is some 60 millimeters), we would find that the F value is roughly F 36. However, by actual comparative exposure, it has been found that the image density obtained at this full aperture is equivalent to that normally obtained at F 18.

Thus we find that because of the nature of the optical system involved, we are obtaining an increase in image intensity almost four times as great as we would be led to believe by the aperture of the glass itself.

This does not involve any violation of optical principle. On the contrary, we have an extremely efficient lens. The entire system of the telescope, including the prism, does not involve any greater loss, if as great, as the normal photographic objectives. More than that, we have a condensing action in the optical train so that the actual optical efficiency is practically that of the objective aperture itself. It is well known that the average high quality photographic lens passes only about 50 percent of the light which falls upon it, more or less, while the efficiency of the telescope is almost perfect, discounting, of course, the reflection at the true surfaces of the objective lens only.

However, when either the telescope or the microscope is involved in a photographic problem, it has been found more satisfactory to compute the focal lengths by the image magnification and the equivalent aperture by the negative density obtained under test conditions. In this way, factors are obtained which, while completely arbitrary, give a picture of actual performance rather than of theoretical performance.

We are not presenting any details for preparing camera supports, but the illustrations will give the general idea upon which the experimenter may base a support to fit the units of equipment he may have at hand. The reproductions from work performed with the small camera and telescope, will show the quality of results and supply sufficient evidence that here is a field of great interest to any serious-minded amateur.