Mechanix Illustrated
Issue: Jan, 1954
Posted in: How to
Tags: candles, money making
No Comments on Candles Lighted Their Way to Fortune (Jan, 1954) 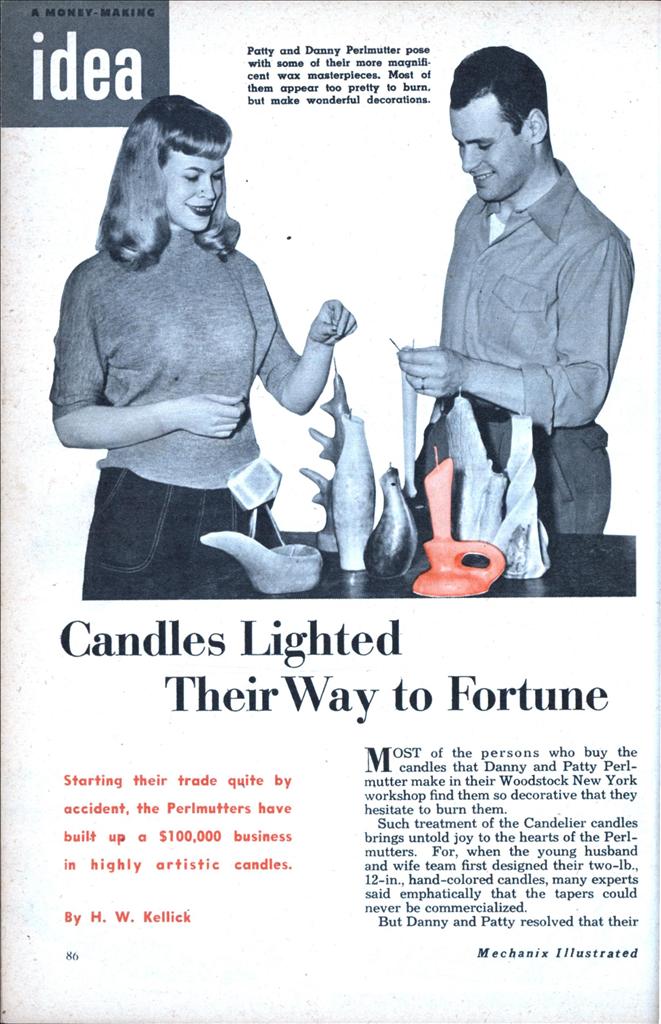 Candles Lighted Their Way to Fortune

Starting their trade quite by accident, the Perlmutters have built up a $100,000 business in highly artistic candles.

MOST of the persons who buy the candles that Danny and Patty Perl-mutter make in their Woodstock New York workshop find them so decorative that they hesitate to burn them.

Such treatment of the Candelier candles brings untold joy to the hearts of the Perl-mutters. For, when the young husband and wife team first designed their two-lb., 12-in., hand-colored candles, many experts said emphatically that the tapers could never be commercialized.

But Danny and Patty resolved that their candles were not only practical, but they were also things of beauty. Confident that their sculptured wax would fit into the decor of any home, the couple decided to expand their production program.

Like many other young folks who start their own business, neither Danny nor Patty knew anything about merchandising, distribution, or financial affairs. Neither did they know anything about candle-making. Patty was a designer who found her art talent being bogged down in a highly competitive profession, and Danny was a semi-pro baseball player who couldn’t foresee a future in his game. They combined their talents, pooled a bankroll of $500, and set to work in earnest.

Today, with the aid of ten trained employees, they sculpture more than 150,000 candles a year which are sold in department stores and gift shops throughout the United States. Furthermore, the Perl-mutters do a gross business that amounts to about $100,000 a year.

Their 15 candeliers are hand crafted and beautifully designed. No two candles are exactly alike. They are fashioned in forms that may be applied to any decor. Shapes are enhanced, not distorted, by the dripping of the wax, and they are designed as year-round candles. They are durable, heat resistant, and they burn slowly, approximately in. per hour.

The Candelier idea began three years ago when Danny and Patty were shopping around for some candles to pretty up their home. While on a tour of stores, they saw and examined many tallow tapers. Somehow, they all seemed alike. Most annoying of all, they were colorless and of the conventional taper variety.

When the Perlmutters departed for home, disappointed in not finding the type of candles they wanted, Danny suddenly popped up with a bright idea.

“Patty,” he beamed, “you’re an artist. Why don’t you design your own candles?”

Later, that same day, Patty, fired by the challenge, played around with a block of sculptor’s wax. She worked the tallow and dug into it with a paring knife, and the mass soon took on the shape of a piece of driftwood with two jutting peaks. The model weighed a little more than two lbs., stood 12 in. high and had a base about four in. around. Wicks were strung through the two peaks.

Suddenly, Danny envisioned tens of thousands of homes displaying their candles on mantles and tables, joining the ranks of other permanent family possessions such as clocks, bric-a-brac-and other treasured personal objects.

However, when the Perlmutters showed their design to a candle-maker friend, he agreed that it was beautiful, but explained that it would never sell because it could not be made to fit the decor of all homes.

Undaunted, the young couple were determined to give their revolutionary candle design a whirl. They picked up two vats from a nearby bankrupt candle factory.

Then they converted an abandoned kindergarten schoolhouse into a combination factory and living quarters.

An engineer friend showed them how to operate the vats. A relative, who is a chemist, provided them with a chemical formula for making wax. Through trial and error, the Perlmutters finally managed to mix a workable batch of tallow. To their surprise, they then discovered that a mold was required for the pouring of the wax.

With the help of their engineer-friend, Patty designed a two-piece plaster of Paris mold which a foundry turned into a permanent aluminum mold.

Finally, the Perlmutters began dipping wax with a will. Proud of their handicraft, they placed a few samples on display in the tiny front window of their establishment. Although people stopped to admire the new-fangled two-wick candles, none took the time to buy. The suspense of anticipating their first sale almost drove the couple crazy. They began to wonder if their friends weren’t right about their candle being a commercial flop.

Luckily, during the summer months, visitors began to stream into the art colony. One cool evening, a few strangers wandered into the Candelier plant. Overjoyed by the visit, Danny and Patty showed the visitors how they made their candles in their “two-by-four” workroom. Before the strangers departed, they bought a few driftwood candles at $2 each. Needless to say, the Perlmutters were elated in breaking the ice with these sales.

“When we sold $6 worth of candles in a day,” recalls Danny, “the place became a madhouse.”

Soon word-to-mouth advertising spread around the Woodstock art colony. As a result, they began to do a brisk business. Steady orders kept the team hopping 18 hours a day, designing, sculpting, painting, and dipping candles.

Although orders seemed to flow in at a steady pace, operating and living costs consumed all the profits. To make a profitable venture out of their wax works, the Perlmutters realized, they would need mass distribution. How to get it became a trying problem.

A solution to this problem was born early in the spring of 1951 when the couple decided to display their products at the annual New York Flower Show. Before the week was out, the Candelier booth had attracted hundreds of people and the Perlmutters were literally swamped with orders for their candles.

A cocoa importer, attracted to the Candelier display, had asked the Perlmutters if they could make up a special cocoa pod type candle. “Sure,” they had answered in unison. “Fine,” said the customer, “here’s an order for 2,000. I want to send them out as Christmas gifts.”

Continued good luck blossomed for the Perlmutters when Mary Pentland, renowned sales representative, stopped at the booth to admire the driftwood, ancient bottle, and Aladdin’s Lamp designs. Mary had many solid ideas and connections. Through her aid, Candelier began shipping orders to class department stores throughout the country. Reorders flowed in. Customers began asking for additional designs.

Many of the designs have come about by accident. For instance, one afternoon Patty was cutting away at a glob of wax with no special idea in mind. The more she carved, the more the wax turned into a modern form. It resembled a huge, uncut diamond and weighed two lbs. To make it salable, it was painted red to look like a flashy ruby. And to make it more interesting, Danny stuck three wooden dowels, four in. long, into the wax to form a stand. The uncut gem became a diamond in the rough. Sales figures prove that.

Not long ago, Jerry and Irene Rhoades, who sell hobby kits, wandered into the Candelier shop. After they were given a tour of the plant, they suggested to the Perlmutters that it would be nice to make up a kit that could be sold to youngsters.

At first Danny and Patty balked at the idea. They claimed it was out of their line. But the Rhoades. insisted that they make up such a set for it would be the only educational kit on the market that could teach the principles of molding to a child.

Now the Perlmutters are marketing the Candelier Candlecraft set that retails for $2.95 at hobby shops and toy departments. The set contains a lifetime mold, wicking, chunks of wax, test tube, carving knife, and separating liquid. Anyone, following simple instructions, can make candles just as the Perlmutters do in their plant.

With increased business swarming all over the place, the Perlmutters recently moved out of the old kindergarten schoolhouse and graduated to larger quarters when they took over an abandoned grade schoolhouse.

If business continues to boom, they may yet take over the local high school. They seem to be working in that direction. •