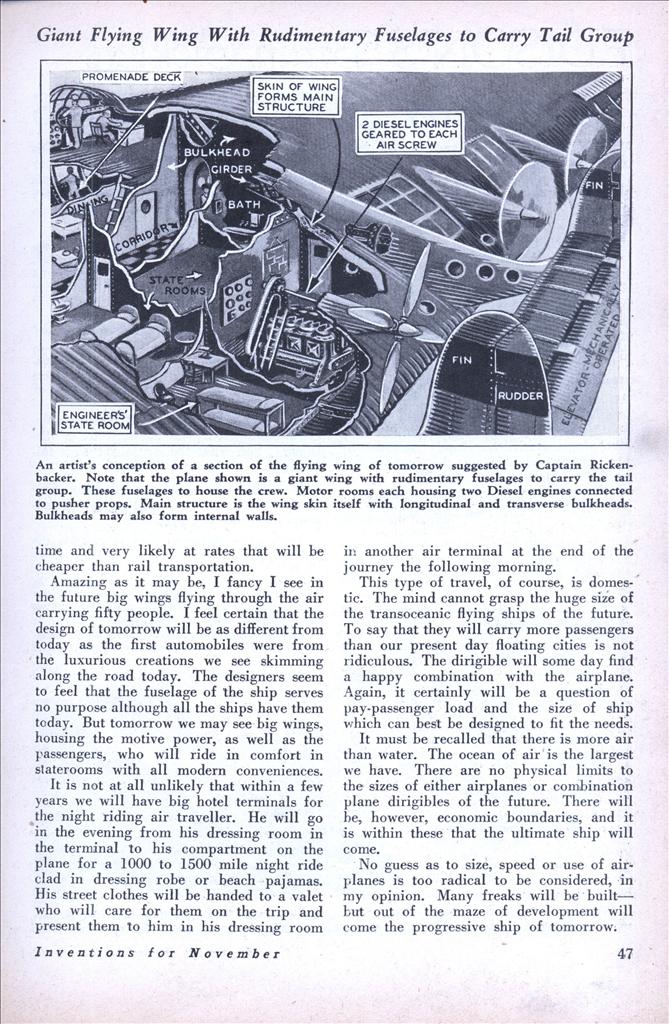 Capt. Rickenbacker’s Airplane of the Future

America’s war-time ace of aces who is now prominently connected with Fokker Aircraft tells of the remarkable ships of tomorrow now being built, and predicts revolutionary developments in flying.

SEVEN years ago with a pilot, mechanic and a traveling companion, I began an air tour of the United States.

It was a visionary journey in a cabin plane, with my companion, a young newspaper friend, making his first air tour. We rode in the cabin of the plane, carried our luggage in the baggage compartment and caused no little commotion as we began our trip from a landing field near New York City.

For the first day all was well. The second day our troubles began. The third day they multiplied. The fourth, they were magnified, and the fifth, they became disastrous when the ship was completely wrecked.

My companion and I completed the journey in a smaller, open war-type biplane, but it was rough travel in comparison to the impressive journey we had mapped out for ourselves in the cabin ship. At that time in my utter disappointment I made the bland statement that there was not a single cabin ship capable of making the extensive tour we had planned. Air enthusiasts and members of the infant industry heaped verbal coals of hatred about my head. But it was true.

During that trip I made many appearances before luncheon clubs and banquet parties, discussing the future of aviation in an imaginative trend. There were many breath-taking statements in my more or less set address. It was necessary to shock audiences into semblance of the realities that were just ahead in the aviation world.

My youthful companion used to laugh after every appearance at which I gave my visionary views on aviation. “In one of these towns,” he used to chide me, “they’ll put you in a sanitorium and I suppose I’ll draw a padded cell for even being in your company.”

“I believe in your sincerity,” he used to say, “but that’s just a Chautauqua lecture you’re giving. It is impossible for those things ever to materialize.”

When I urged him to take up aviationâ€”this was seven years ago, rememberâ€”as his life’s occupation, he just smiled and returned to his typewriter. During those intervening years, we had not been in the air together. Frequently we met and laughed about the primitive flying journey we made together.

But late the other afternoon, we found ourselves in Chicago with a mutual necessity of being in Los Angeles as rapidly as transportation could carry us.

“I have it,” I sparked with the enthusiasm of one who has a brilliant idea, “we will take a night train to Kansas City and fly out on the plane passenger line to Los Angeles.”

He laughed in a disconcerting manner and replied that “If we had to inspect as many corn fields in the proposed trip as we did in the last one we made several years ago, we could beat the plane out by pedaling a bicycle.”

But necessity required action, so he agreed to the trip. I wired ahead for accommodations in the plane as we boarded a train for the overnight ride to Kansas City.

Bright and early the next morning we were up, ate breakfast as the train speeded into Kansas City and no sooner had the train halted in the station than we were off to the flying depot in a taxicab.

The motors of a tri- Â¦ motored, twelve-passenger Fokker transport plane were being warmed up as we alighted at the field. “Hurry along now,” commanded the plane station attendant, “we have only a minute and a half to get away on timeâ€”and we travel on schedule.”

Our baggage was placed aboard while we signed the ship’s register and there was a general bustle of excitement about the station and the field preparatory to the departure of the ship of the Western Air Express for its one – day ride to Los Angeles.

“What is this?” demanded my companion, “a game?” He felt that the rush and hurry was being staged for him. As a matter of fact, I never before had traveled on the line. In a moment we were snuggled comfortably in big chairs across the aisle from each otherâ€”a few seconds more and we were in the air. Shortly we flew over the train we had just leftâ€”one of the crack, fast trains to the West coast. “Those folks will arrive in Los Angeles the second morning after we have enjoyed a night’s rest in a comfortable hotel bed,” I told my companion, indicating the train through the window of the cabin plane in which we were riding.

Rapidly we thundered alongâ€”with halts at Wichita, Kansas, and Amarillo, Texas, for fuel. As afternoon began to fade we arrived in Albuquerque, New Mexico, for fuel. Six hours more and we would be in Los Angeles. It requires 26 hours for the fastest train to travel the distance. Into the air again. Over Kingman, New Mexico â€” a dot on a dusty desert. The plane swooped down on a barren field. Almost before the plane halted, a tank wagon came rushing alongside and within a few moments â€” with all the speed and drama of pony express daysâ€”the ship was refuelled and in the air again on the last lap of the one day trip into Los Angeles from Kansas City.

In the early evening, the pilot gracefully brought the ship to rest on the Western Air Express field in Los Angeles. The pilot taxied to the depot. A movable, covered ramp was brought to the ship’s door. The baggage was hurriedly taken into the depot. Passengers clambered out and were sent to their downtown addresses in dispatch cars.

“I’m all air-minded now,” exclaimed my friend that evening, “so please paint for me the developments in aviation for the coming years as perfectly as you pictured today’s events seven years ago.”

I wish I might. So does everyone who is at all cognizant of the present day success of aviation. Money and industry have finally discovered aviation. It is growing in leaps and bounds. It is difficult for even an imaginative mind to keep ahead of reality in flying today. As a matter of fact, surprisingly few persons are cognizant of the network of air linesâ€”both passenger, mail and expressâ€”which form a web over the United States. Particularly is this true in the west, where distances are great and where the mountainous contour makes ordinary modes of transportation slow and cumbersome in comparison.

Combination plane and train trips are being run daily between New York and Los Angelesâ€”the passengers riding by plane during the day and traveling by train at night.

But within a year sleeping planes will be whisking passengers, comfortably sleeping in compartments, through space. It soon will be possible to fly between New York and Los Angeles in twenty-four hours. These ships will be powered with four motors â€” set in tandem in the wingsâ€”and they will be fast, quiet and comfortable.

These musings are not predictions. These ships are being built and will be in operation within the year. Their use will be the handwriting in the sky of the future.

There are many predictions as to the size, shape, and speed. But there is none competent at this time, I believe, to definitely set forth a picture of the ultimate. A short time ago a German flying boat built to carry 100 passengers took to the air.

But that does not mean that we will keep on building huge flying hulks. There is a likelihood, as a matter of fact, that the happiest combination as to size will be forty to fifty passengers. Aviation-minded people like to compare air to train travel, so far as operation is concerned.

The crack trains, they point outâ€”tremendous, steel sheets of activityâ€”carry but an average of 65 passengers. Yet it requires many crews, a heavy investment, expensive trackage and equipment. The same number of persons, it is pointed out, could easily be hauled in one plane, over the same distance at much less the expense, in quicker time and very likely at rates that will be cheaper than rail transportation.

Amazing as it may be, I fancy I see in the future big wings flying through the air carrying fifty people. I feel certain that the design of tomorrow will be as different from today as the first automobiles were from the luxurious creations we see skimming along the road today. The designers seem to feel that the fuselage of the ship serves no purpose although all the ships have them today. But tomorrow we may see big wings, housing the motive power, as well as the passengers, who will ride in comfort in staterooms with all modern conveniences.

It is not at all unlikely that within a few years we will have big hotel terminals for the night riding air traveller. He will go in the evening from his dressing room in the terminal to his compartment on the plane for a 1000 to 1500 mile night ride clad in dressing robe or beach pajamas. His street clothes will be handed to a valet who will care for them on the trip and present them to him in his dressing room in another air terminal at the end of the journey the following morning.

This type of travel, of course, is domestic. The mind cannot grasp the huge size of the transoceanic flying ships of the future. To say that they will carry more passengers than our present day floating cities is not ridiculous. The dirigible will some day find a happy combination with the airplane. Again, it certainly will be a question of pay-passenger load and the size of ship which can best be designed to fit the needs.

It must be recalled that there is more air than water. The ocean of air is the largest we have. There are no physical limits to the sizes of either airplanes or combination plane dirigibles of the future. There will be, however, economic boundaries, and it is within these that the ultimate ship will come.

No guess as to size, speed or use of airplanes is too radical to be considered, in my opinion. Many freaks will be built-â€” but out of the maze of development will come the progressive ship of tomorrow.