The state of the art has progressed a bit in the last 30 years or so. 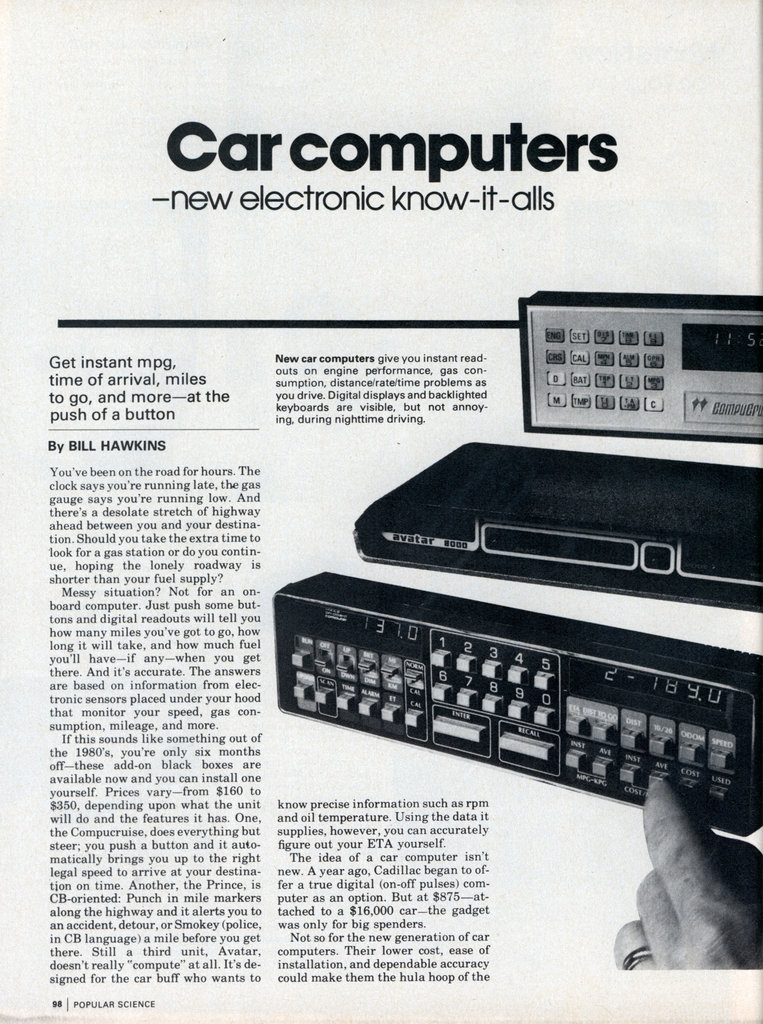 Get instant mpg, time of arrival, miles to go, and more—at the push of a button
By BILL HAWKINS

You’ve been on the road for hours. The clock says you’re running late, the gas gauge says you’re running low. And there’s a desolate stretch of highway ahead between you and your destination. Should you take the extra time to look for a gas station or do you continue, hoping the lonely roadway is shorter than your fuel supply?

Messy situation? Not for an onboard computer. Just push some buttons and digital readouts will tell you how many miles you’ve got to go, how long it will take, and how much fuel you’ll have—if any—when you get there. And it’s accurate. The answers are based on information from electronic sensors placed under your hood that monitor your speed, gas consumption, mileage, and more.

If this sounds like something out of the 1980s, you’re only six months off—these add-on black boxes are available now and you can install one yourself. Prices vary—from $160 to $350, depending upon what the unit will do and the features it has. One, the Compucruise, does everything but steer; you push a button and it automatically brings you up to the right legal speed to arrive at your destination on time. Another, the Prince, is CB-oriented: Punch in mile markers along the highway and it alerts you to an accident, detour, or Smokey (police, in CB language) a mile before you get there. Still a third unit, Avatar, doesn’t really “compute” at all. It’s designed for the car buff who wants to New car computers give you instant readouts on engine performance, gas consumption, distance/rate/time problems as you drive. Digital displays and backlighted keyboards are visible, but not annoying, during nighttime driving.

know precise information such as rpm and oil temperature. Using the data it supplies, however, you can accurately figure out your ETA yourself.

The idea of a car computer isn’t new. A year ago, Cadillac began to offer a true digital (on-off pulses) computer as an option. But at $875—attached to a $16,000 car—the gadget was only for big spenders.

Not so for the new generation of car computers. Their lower cost, ease of installation, and dependable accuracy could make them the hula hoop of the add-on industry for autos and vans.

How they work As you drive, things are happening under the hood that relate to your exact position. When you step on the gas, fuel flows, increasing with engine rpm. The engine turns the transmission, and the transmission turns the wheels under you. You begin to move and, through it all, time is passing by. Just how far you move—distance-will depend on your speed—rate—and how long you’ve been traveling—time. The old equation—Distance = Rate x Time—holds for new computers, too. The trick, however, is in measuring these numbers.

These systems use microprocessors, tiny computers on a single integrated circuit chip that can be programmed to step through any sequence of commands: add, subtract, save data, display the results. But digital computers require single pieces of on-off pulses (bits) to work. A spinning crankshaft hardly conforms to this requirement, so transducers (sensors) are used to convert the mechanical motion into a usable electrical signal. v The most important sensor is called the speed transducer (although its output is used to represent distance, not speed). It’s basically a coil of wire and a magnet. In the Compucruise system, four magnets glued and taped to the driveshaft are used; the coil mounts nearby on the underside of the car. The Prince system puts the magnet and coil in one package, which splices into the speedometer cable. The idea and results are the same: As you move, the cable or crankshaft turns, allowing a magnet to pass in front of the coil. When it does, a small Continued voltage pulse is induced in the coil, representing a full or partial turn. Since the crankshaft and odometer cable revolve in proportion to the movement of your car, a specific number of pulses will represent a specific distance.

How much distance? That depends on such things as the rear-axle ratio and tire size. But that’s where the computing power of the microprocessor comes in: Before using any of these systems, you make a simple calibration. At the beginning of a measured mile, you push a button. That tells the computer to begin at zero. Then, as you travel the mile stretch, the computer counts the pulses. At the end of the mile, push the button again. The number of accumulated pulses are then stored as a reference base. If, for example, the computer counted 800 pulses for the measured mile, it knows that 400 represent one-half mile, 1600 mean two miles, and so on, for any distance you travel. And all this will automatically take tire size and other variables into account, since they were part of the original calibration. (And this, of course, means that you must recalibrate the system if you change your tires.) Okay, the computer now knows how far you’ve gone, but it must also know your speed to do any useful work. To determine it accurately, the system computes it. Since the speed—or rate-is equal to how long it took you to go a certain distance, and the distance is known from the calibration, all that’s needed to calculate the speed is the time (R = D/T).

For that, a digital clock is used, basically the same type as the digital clock on your desk. The clock circuitry starts with a quartz-crystal-controlled oscillator—merely a circuit that switches on and off at a precise rate, thousands of times a second. Other digital circuits within the clock divide this time down into thousandths, hundredths, tenths, and finally single pulses per second.

The computer can use any of these time bases as a “window”—a single moment in time to count distance pulses from the transducer. If, for instance, it counts four pulses during a 1/10-second window, that’s equal to 40 pulses per second; 2400 pulses per minute; 144,000 pulses per hour. And, from the original distance calibration, if each pulse represented one foot of movement, then you would be moving at 144,000 feet per hour or 27.3 miles per hour.

If all that has you confused, don’t worry. Fortunately, the computers do it all automatically—every second— and show the results on a digital display. But that’s not all.

More tricks Besides a speed transducer, the Compucruise and Prince units use a flow transducer on the gas line. It, too, uses pulses to indicate the amount of fuel passing through to the carburetor. And once calibrated by entering in the amount of fuel consumed at your next fill-up, along with the capacity of your fuel tank and the cost per gallon of gas, there’s no end to what these systems can predict.

“We’ve got all this information coming into the computer—what we’ve done is to try and take full advantage of each piece,” said Don King, vice president of Compucruise. He’s not kidding. The small, 20-button box can perform 44 different functions, including instant mpg, cost per mile, average speed, lap timer, ETA, fuel to empty, present time. Even external temperature sensors can be connected for an inside/outside temperature display. And as a $40 option, the mechanics for a cruise-control system are thrown in, all precisely controlled by the black box on your dash.

Since each key of the Compucruise system performs multiple functions, it’s possible to get the correct sequence mixed up when you first start to use it. But the computer outthinks you there, too: Push the wrong button and the display shows error, and adds an audible alert.

The Prince system is a bit more straightforward in its operation; each button is assigned a specific purpose. The system also contains a programmable memory. Enter in up to five mile markers and the unit reminds you when you’re a mile away from a detour, an accident, or other roadway perils. It’s assumed this information would come from “Good Buddies” over the CB, but the computer is just as handy for storing mileage markers for directions—at the next beep, you know to look for route 287 on the left, for instance.

The Avatar is the simplest of the three units. It’s designed to give precise engine and time information: surface- and fluid-temperature display, digital speedometer, clock, elapsed time, battery voltage, digital tachometer, and a string of LED indicators that light in proportion to rpm, serving as an analog tachometer.

Just three buttons operate the system, but since it does not contain a microprocessor, any computations you do with it will have to come from your brain.

On the road As I rode through the streets of New York and onto a parkway system, at the same time pushing buttons and reading digital displays, I was happily alert to one point: A friend was doing the driving.

The myriad of digital displays and pushbuttons are not meant to be the center of your attention while you’re at the wheel. Rather, as the instruction manuals point out, the system should be set up before starting a trip so you can glance at the unit occasionally to see that you’re on course.

As we rode, I couldn’t help but think this was just the beginning. Under the hood of his car, a microprocessor-based electronic ignition system was controlling our fuel flow for optimum mpg, firing spark plugs for precise engine performance, and advancing timing for instant acceleration when we needed it. Inside the box in front of me, another microprocessor was controlling our speed, indicating our location, displaying how much fuel we had, and telling us when we’d arrive at our destination. All that’s left, I thought, is the steering—and that may be just a matter of time.