This looks really hard to use… 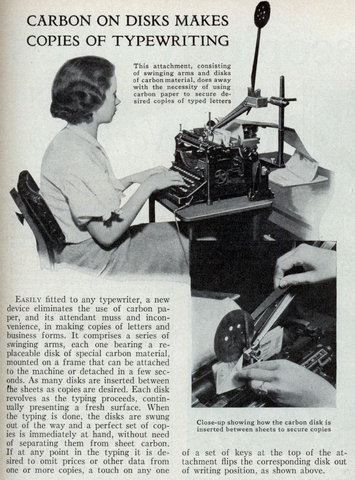 Easily fitted to any typewriter, a new device eliminates the use of carbon paper, and its attendant muss and inconvenience, in making copies of letters and business forms. It comprises a series of swinging arms, each one bearing a replaceable disk of special carbon material, mounted on a frame that can be attached to the machine or detached in a few seconds. As many disks are inserted between the sheets as copies are desired. Each disk revolves as the typing proceeds, continually presenting a fresh surface. When the typing is done, the disks are swung out of the way and a perfect set of copies is immediately at hand, without need of separating them from sheet carbon. If at any point in the typing it is desired to omit prices or other data from one or more copies, a touch on any one of a set of keys at the top of the attachment flips the corresponding disk out of writing position, as shown above.