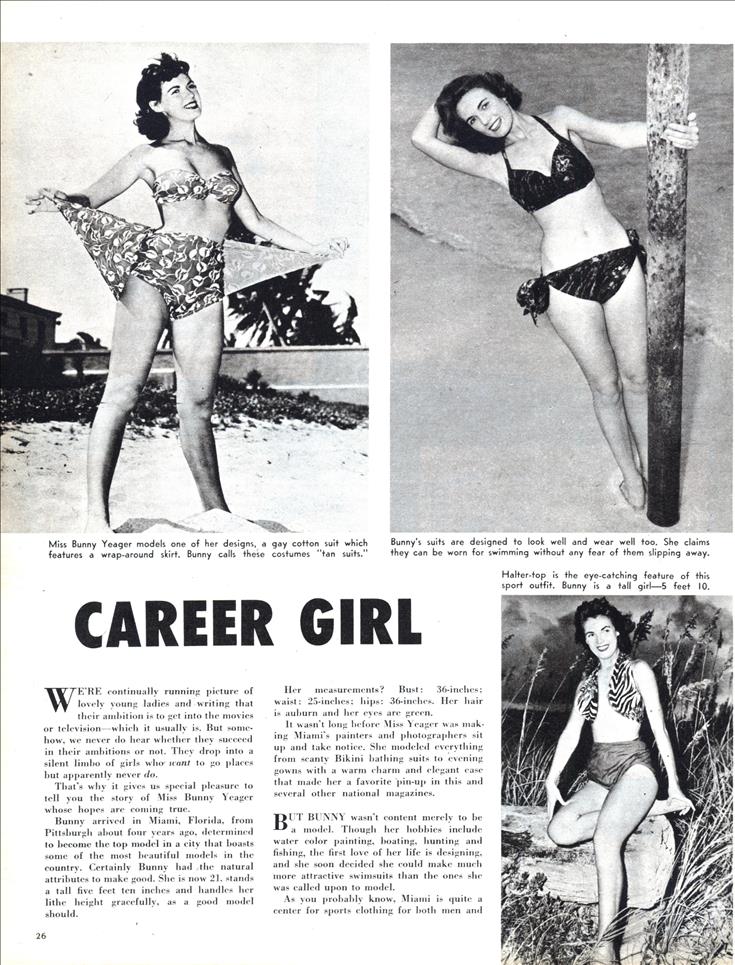 WE’RE continually running picture of lovely young ladies and writing; that their ambition is to get into the movies or television—which it usually is. But somehow. we never do hear whether they succeed in their ambitions or not. They drop into a silent limbo of girls who* want to go places but apparently never do.

That’s why it gives us special pleasure to tell you the story of Miss Bunny Yeager whose hopes are coining true.

Bunny arrived in Miami, Florida, from Pittsburgh about four years ago, determined to become the top model in a city that boasts some of the most beautiful models in the country. Certainly Bunny had the natural attributes to make good. She is now 21. stands a tall five feet ten inches and handles her lithe height gracefully, as a good model should.

Her measurements? Bust: 36-inches; waist: 25-inches; hips: 36-inches. Her hair is auburn and her eyes are green.

It wasn’t long before Miss Yeager was making Miami’s painters and photographers sit up and take notice. She modeled everything from scanty Bikini bathing suits to evening gowns with a warm charm and elegant ease that made her a favorite pin-up in this and several other national magazines.

BUT BUNNY wasn’t content merely to be a model. Though her hobbies include water color painting, boating, hunting and fishing, the first love of her life is designing, and she soon decided she could make much more attractive swimsuits than the ones she was called upon to model.

As you probably know, Miami is quite a center for sports clothing for both men and women. Bunny discovered she couldn’t get the kind of swimsuits she liked, that fit her properly. What was more natural than to design her own suits herself? That she did. and they attracted so much favorable comment that it wasn’t long before the talented Miss Yeager was in business, manufacturing bathing suits and sports clothes—and doing very well at it, thank you!

The pictures on these pages will give you some idea of the type of swimsuits Bunny makes. They are Americanized versions of the French Bikini, but made so that average women look well in them. Bunny designs suits that look like exclusive modes for models but arc actually practical costumes that can be worn in the water and are guaranteed to do nice things for the wearer’s figure.

Bunny prefers the term “tan suits” to Bikini, but whatever you call them, they’re cute, and no man has ever been heard to complain about them! Anyway, they’ve made a career for Miss Bunny Yeager who was determined to get ahead—and has! More power to her!