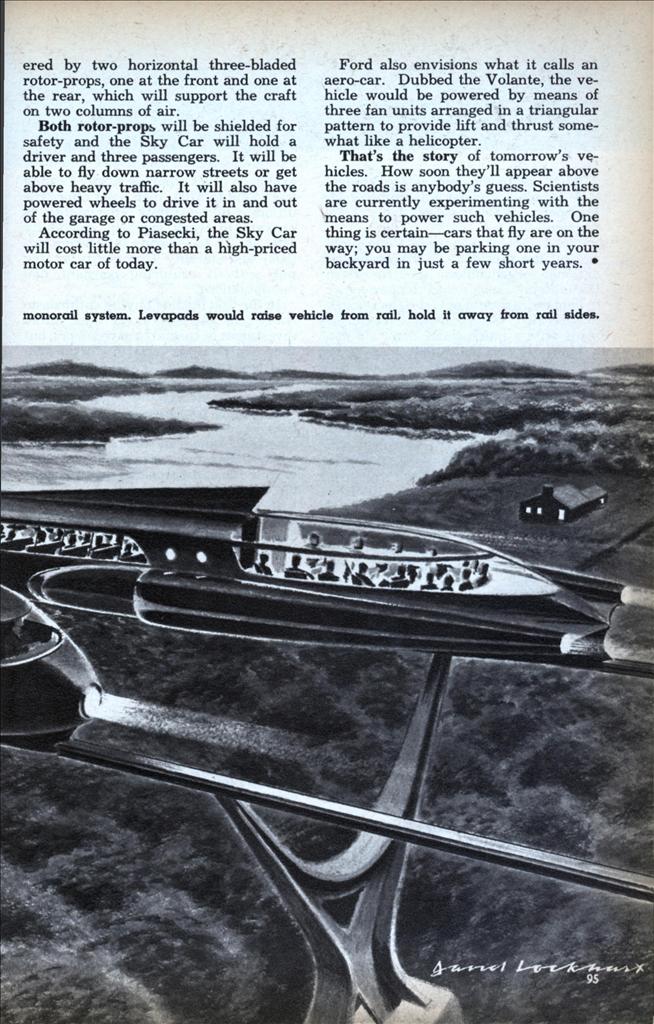 YOUR car of the future may have no wheels. It may not even touch the road as it races along the turnpike at speeds well above 100 mph while you and your family sit back and enjoy the ride—without fear of accident or injury.

This revolutionary new mode of travel was recently unveiled by the Ford Motor Company in the form of the Glideair—a wheel-less vehicle that rides on a thin film of air a fraction of an inch above the road.

Says Andrew A. Kucher, Ford’s vice president in charge of Engineering and Research: “We look upon Glideair as a new form of high-speed land transportation, probably in the field of rail surface travel, for fast trips of distances of up to about 1,000 miles.” A gas turbine or turbojet engine would supply the power to both levitate and propel the Glideair. Instead of wheels the vehicle would employ “levapads,” a Kucher-coined word. Tiny jets of air would stream through holes in the levapads, supporting the vehicle. It is significant to note that levapads have already been designed to fit around a standard rail. They raise the vehicle from the rail and keep it away from the rail sides.

There are also others with their fingers in the wheel-less vehicle pie. Noted designer Carl Reynolds recently showed off his concept of a car without wheels which he forsees by 1978. Mr. Reynolds says, “The highway cruiser, or large passenger car will float, or literally fly a short distance above the road supported on air compressed by turbine-driven ducted fans.”

“In the wheel-less car,” Reynolds goes on to say, “the driver’s controls will be automated to simplify safe and effortless driving. . . Inter-city expressways will have electronic equipment for driver information as well as for traffic control and guidance… The car without wheels will negotiate fairly rough terrain, even travel over smooth water!”

Piasecki Aircraft Corp. has a Sky Car in the works for the not-too-distant future. It will be an offspring of their 59-K, one of two Flying Jeeps being developed for the Army. The 59-K, which is “well ahead of schedule,” according to the Army, is designed to combine the utility of ground jeeps with the hovering capabilities of small helicopters.

The Sky Car will be the civilian version. It will have no wings or conventional propellers and will be pow- ered by two horizontal three-bladed rotor-props, one at the front and one at the rear, which will support the craft on two columns of air.

Both rotor-props will be shielded for safety and the Sky Car will hold a driver and three passengers. It will be able to fly down narrow streets or get above heavy traffic. It will also have powered wheels to drive it in and out of the garage or congested areas.

According to Piasecki, the Sky Car will cost little more than a high-priced motor car of today.

Ford also envisions what it calls an aero-car. Dubbed the Volante, the vehicle would be powered by means of three fan units arranged in a triangular pattern to provide lift and thrust somewhat like a helicopter.

That’s the story of tomorrow’s vehicles. How soon they’ll appear above the roads is anybody’s guess. Scientists are currently experimenting with the means to power such vehicles. One thing is certain—cars that fly are on the way; you may be parking one in your backyard in just a few short years. •