Modern Mechanix
Issue: May, 1929
Posted in: Crime and Police, Radio
Tags: fax, fingerprinting
1 Comment on Catching Crooks by Radio (May, 1929)

The actress in question with Wellington Belford was the late Ruth Renick.  The “poison tongue” gentry refers to gossip columnists. 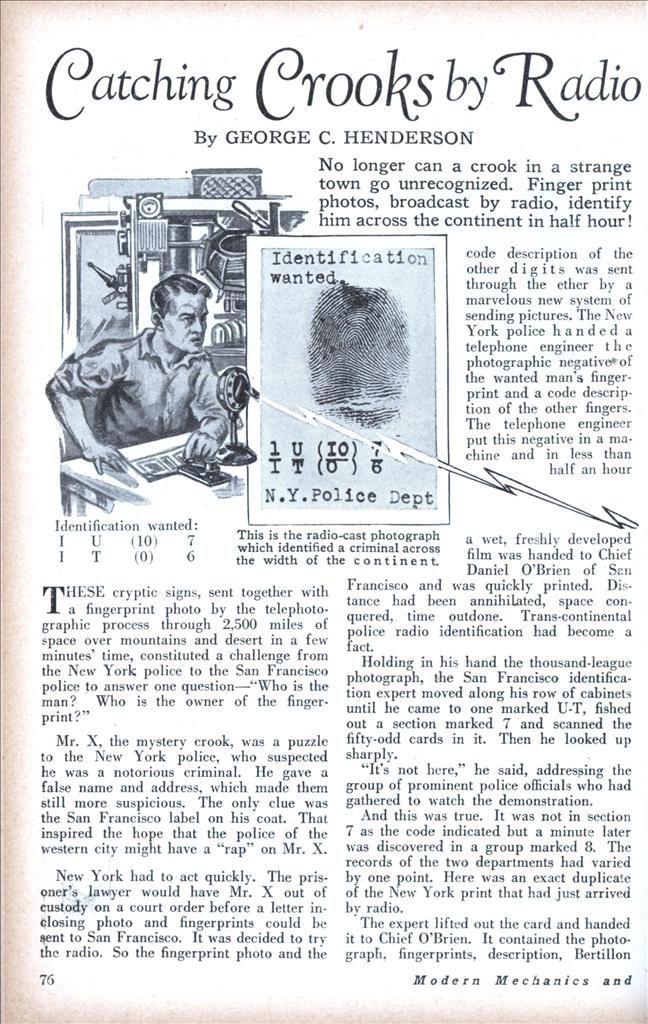 No longer can a crook in a strange town go unrecognized. Finger print photos, broadcast by radio, identify him across the continent in half hour!

THESE cryptic signs, sent together with a fingerprint photo by the telephotographic process through 2,500 miles of space over mountains and desert in a few minutes’ time, constituted a challenge from the New York police to the San Francisco police to answer one question—'”Who is the man? Who is the owner of the fingerprint?”

Mr. X, the mystery crook, was a puzzle to the New York police, who suspected he was a notorious criminal. He gave a false name and address, which made them still more suspicious. The only clue was the San Francisco label on his coat. That inspired the hope that the police of the western city might have a “rap” on Mr. X.

New York had to act quickly. The prisoner’s lawyer would have Mr. X out of custody on a court order before a letter inclosing photo and fingerprints could be sent to San Francisco. It was decided to try the radio. So the fingerprint photo and the code description of the other digits was sent through the ether by a marvelous new system of sending pictures. The New York police handed a telephone engineer the photographic negative” of the wanted man’s fingerprint and a code description of the other fingers. The telephone engineer put this negative in a machine and in less than half an hour a wet, freshly developed film was handed to Chief Daniel O’Brien of San Francisco and was quickly printed. Distance had been annihilated, space conquered, time outdone. Trans-continental police radio identification had become a fact.

Holding in his hand the thousand-league photograph, the San Francisco identification expert moved along his row of cabinets until he came to one marked U-T, fished out a section marked 7 and scanned the fifty-odd cards in it. Then he looked up sharply.

“It’s not here,” he said, addressing the group of prominent police officials who had gathered to watch the demonstration.

And this was true. It was not in section 7 as the code indicated but a minute later was discovered in a group marked 8. The records of the two departments had varied by one point. Here was an exact duplicate of the New York print that had just arrived by radio.

The expert lifted out the card and handed it to Chief O’Brien. It contained the photograph, fingerprints, description, Bertillon measurement and criminal record of Harold Keller, convicted shoplifter.

One hour and ten minutes after the print had been placed on the transmitting instrument in New York, the San Francisco police had completely identified the suspect and wired the Gotham police head of this identification.

When confronted with this information, the fair-haired young man, the mysterious prisoner, admitted his identity. When the hearing on the writ of habeas corpus came up a few hours later, the New York police were able to present evidence upon which Keller was held. Otherwise he would have had to be released.

Delay in securing warrants and identification from remote points had hampered the New York police frequently and permitted criminals to go free. They had ” hoped it would work, but doubted. There was the case of Major Wellington Belford, whose arrest on the charge of impersonating an officer in an Oakland hotel led to a popular actress getting involved with the “poison tongue” gentry through her connection with Belford. Belford was free on $500 bail and had jumped to Canada before the New York police could get through an order to hold.

Now science has made this sort of thing impossible. Wire and wireless transmission of photographs have been tested thoroughly enough even to be trusted with so delicate a task as determining the freedom of a human being. X-ray photographs of a human hand, showing a broken finger, have been forwarded by wire from New York to Chicago for a diagnosis there. A Gotham newspaper has sent an entire advertising layout by this medium to a Chicago newspaper.