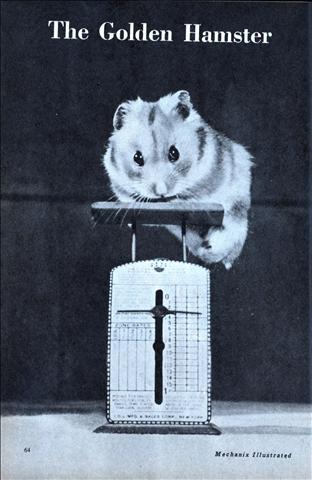 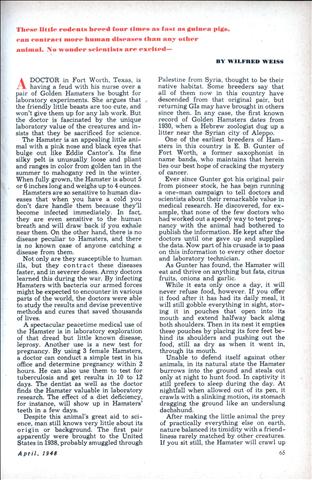 These little rodent breed four times as fast us guinea pigs, can contract more human diseases than any other animal. No wonder scientists are excited
— BY WILFRED WEISS

A DOCTOR in Fort Worth, Texas, is having a feud with his nurse over a pair of Golden Hamsters he bought for laboratory experiments. She argues that the friendly little beasts are too cute, and won’t give them up for any lab work. But the doctor is fascinated by the unique laboratory value of the creatures and insists that they be sacrificed for science.

Poultry raising offers you pleasure and profit combined with exercise and fresh air; we are helping many poultry raisers to health and profit and can help you, too. Only correspondence course indorsed by leading agricultural colleges. Write quick for free book “How to Raise Poultry for profit.”
THE NATIONAL POULTRY INST., INC., Dept. 323, Washington, D. C.

Modern Mechanix
Issue: Mar, 1930
Posted in: Animals For Profit, Entertainment
No Comments on Star Actors of the Flea Circus (Mar, 1930) 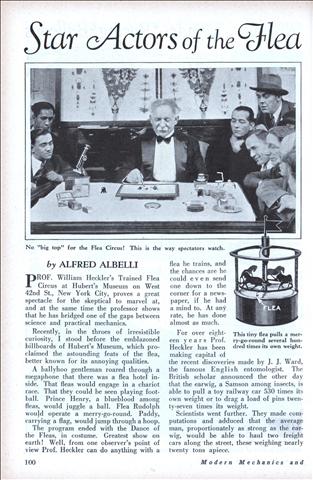 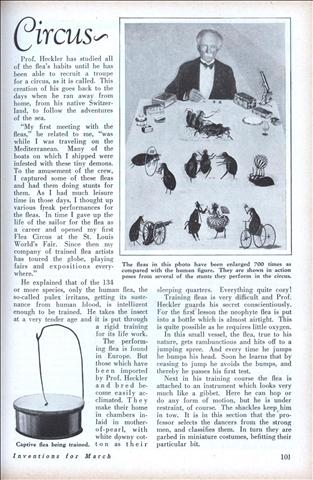 Star Actors of the Flea Circus

PROF. William Heckler’s Trained Flea Circus at Hubert’s Museum on West 42nd St., New York City, proves a great spectacle for the skeptical to marvel at, and at the same time the professor shows that he has bridged one of the gaps between science and practical mechanics.

Good Market. Prices steady. Pleasant, outdoor work. Easy to ship to any part of the country. Nation-wide market at your command. 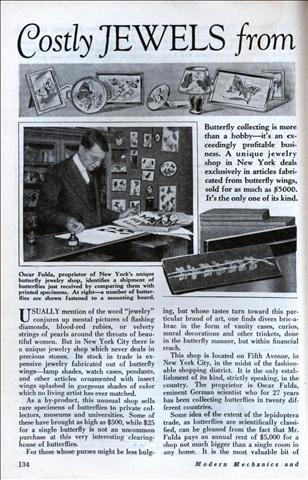 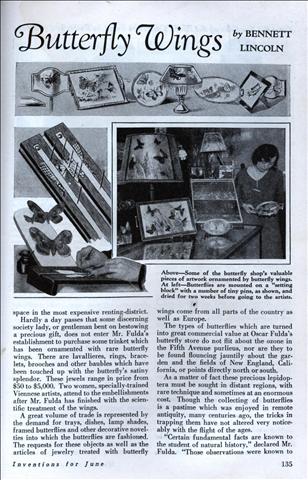 Butterfly collecting is more than a hobby—it’s an exceedingly profitable business. A unique jewelry shop in New York deals exclusively in articles fabricated from butterfly wings, sold for as much as $5000. It’s the only one of its kind.

USUALLY mention of the word “jewelry” conjures up mental pictures of flashing diamonds, blood-red rubies, or velvety strings of pearls around the throats of beautiful women. But in New York City there is a unique jewelry shop which never deals in precious stones. Its stock in trade is expensive jewelry fabricated out of butterfly wings—lamp shades, watch cases, pendants, and other articles ornamented with insect wings splashed in gorgeous shades of color which no living artist has ever matched. 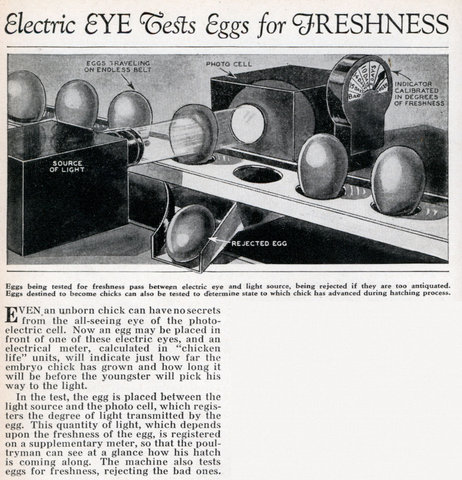 EVEN an unborn chick can have no secrets from the all-seeing eye of the photoelectric cell. Now an egg may be placed in front of one of these electric eyes, and an electrical meter, calculated in “chicken life” units, will indicate just how far the embryo chick has grown and how long it will be before the youngster will pick his way to the light.

Please, someone save this pony! He needs help oh so bad. 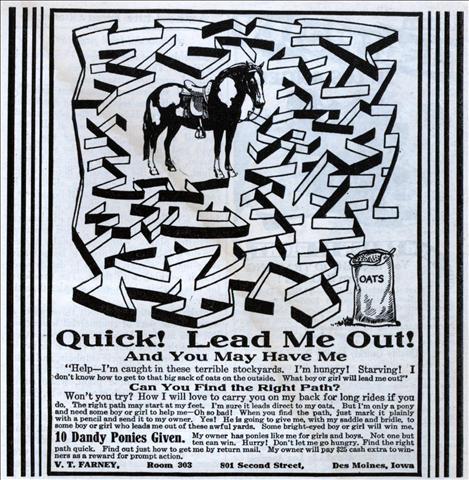 Quick! Lead Me Out!

And You May Have Me

“Help—I’m caught in these terrible stockyards. I’m hungry! Starving! I don’t know how to get to that big sack of oats on the outside. What boy or girl will lead me out?”

Mechanix Illustrated
Issue: Jan, 1959
Posted in: Animals For Profit
5 Comments on COFFINS FOR YOUR PETS (Jan, 1959) 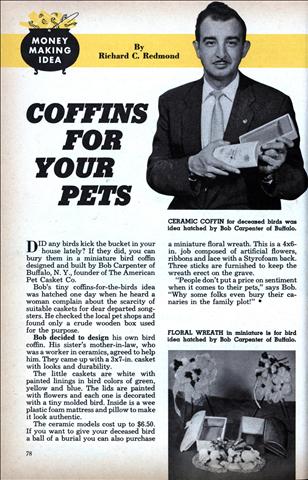 COFFINS FOR YOUR PETS

DID any birds kick the bucket in your house lately? If they did, you can bury them in a miniature bird coffin designed and built by Bob Carpenter of Buffalo, N. Y., founder of The American Pet Casket Co.

Bob’s tiny coffins-for-the-birds idea was hatched one day when he heard a woman complain about the scarcity of suitable caskets for dear departed songsters. He checked the local pet shops and found only a crude wooden box used for the purpose. 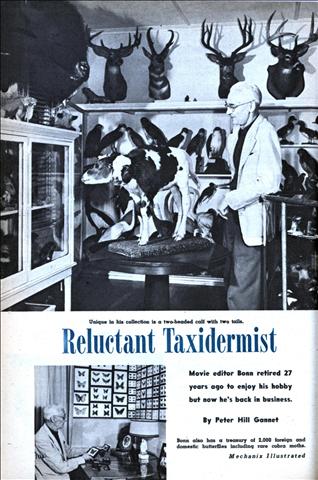 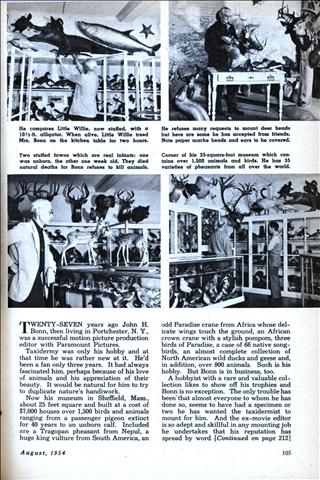 Movie editor Bonn retired 27 years ago to enjoy his hobby but now he’s back in business.

Taxidermy was only his hobby and at that time he was rather new at it. He’d been a fan only three years. It had always fascinated him, perhaps because of his love of animals and his appreciation of their beauty. It would be natural for him to try to duplicate nature’s handiwork.

Mechanix Illustrated
Issue: Oct, 1955
Posted in: Animals For Profit
1 Comment on They Grub for a Living (Oct, 1955) 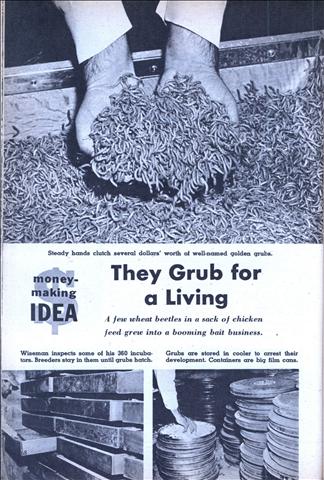 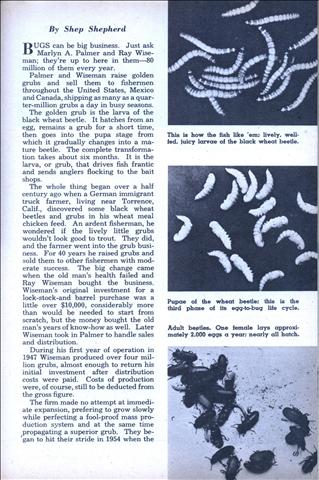 They Grub for a Living

A few wheat beetles in a sack of chicken feed grew into a booming bait business.

BUGS can be big business. Just ask Marlyn A. Palmer and Ray Wiseman; they’re up to here in them—80 million of them every year.

Palmer and Wiseman raise golden grubs and sell them to fishermen throughout the United States, Mexico and Canada, shipping as many as a quarter-million grubs a day in busy seasons.

The golden grub is the larva of the black wheat beetle. It hatches from an egg, remains a grub for a short time, then goes into the pupa stage from which it gradually changes into a mature beetle. The complete transformation takes about six months. It is the larva, or grub, that drives fish frantic and sends anglers flocking to the bait shops.