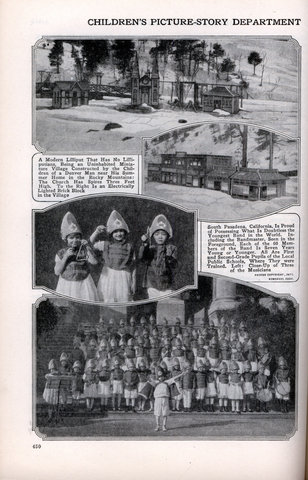 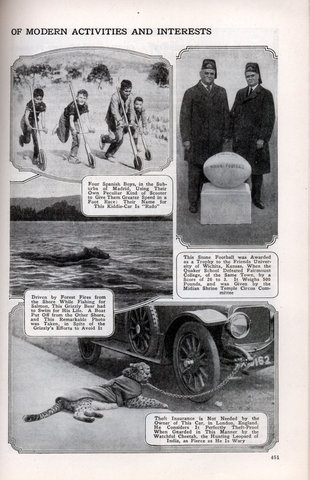 A Modern Lilliput That Has No Lilliputians, Being an Uninhabited Miniature Village Constructed by the Children of a Denver Man near His Summer Home in the Rocky Mountains: The Church Has Spires Three Feet High. To the Right Is an Electrically Lighted Brick Block in the Village

South Pasadena, California, Is Proud of Possessing What Is Doubtless the Youngest Band in the World. Including the Bandmaster, Seen in the Foreground, Each of the 60 Members of the Band Is Seven Years Young or Younger. All Are First and Second-Grade Pupils of the Local Public Schools, Where They were Trained. Left: Close-Up of Three of the Musicians 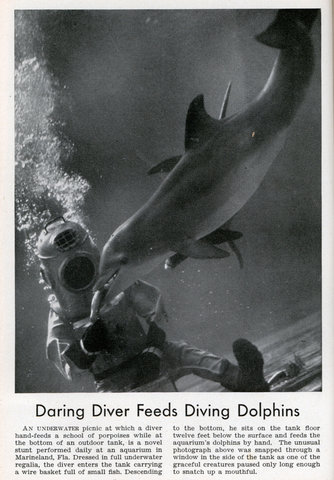 An underwater picnic at which a diver hand-feeds a school of porpoises while at the bottom of an outdoor tank, is a novel stunt performed daily at an aquarium in Marineland, Fla. Dressed in full underwater regalia, the diver enters the tank carrying a wire basket full of small fish. Descending to the bottom, he sits on the tank floor twelve feet below the surface and feeds the aquarium’s dolphins by hand. The unusual photograph above was snapped through a window in the side of the tank as one of the graceful creatures paused only long enough to snatch up a mouthful. 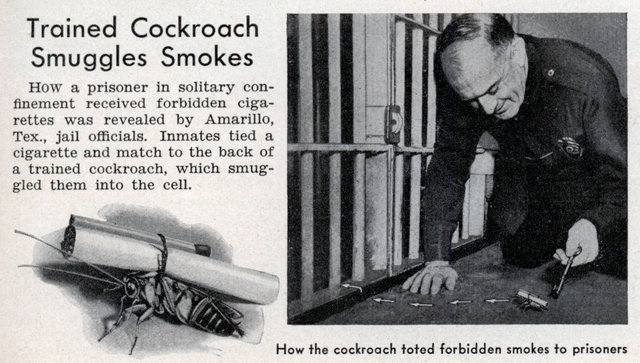 Trained Cockroach Smuggles Smokes
How a prisoner in solitary confinement received forbidden cigarettes was revealed by Amarillo, Tex., jail officials. Inmates tied a cigarette and match to the back of a trained cockroach, which smuggled them into the cell.

Popular Mechanics
Issue: Mar, 1924
Posted in: Other Animals
1 Comment on CIRCUS “HIPPO” IS HARNESSED AND TRAINED TO DRAW CART (Mar, 1924)

CIRCUS “HIPPO” IS HARNESSED AND TRAINED TO DRAW CART (Mar, 1924) 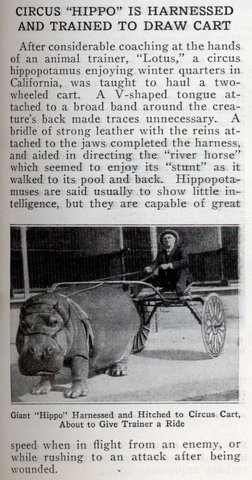 CIRCUS “HIPPO” IS HARNESSED AND TRAINED TO DRAW CART

After considerable coaching at the hands of an animal trainer, “Lotus,” a circus hippopotamus enjoying winter quarters in California, was taught to haul a two-wheeled cart. A V-shaped tongue attached to a broad band around the creature’s back made traces unnecessary. A bridle of strong leather with the reins attached to the jaws completed the harness, and aided in directing the “river horse” which seemed to enjoy its “stunt” as it walked to its pool and back. Hippopotamuses are said usually to show little intelligence, but they are capable of great speed when in flight from an enemy, or while rushing to an attack after being wounded.

Well, I guess we know now where that urban legend about alligators in the sewer started. 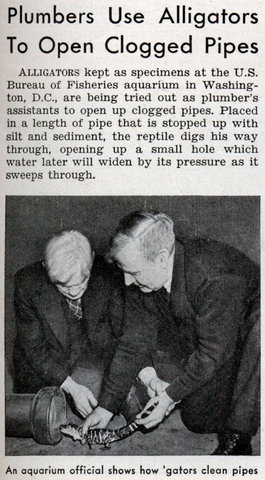 Alligators kept as specimens at the U.S. Bureau of Fisheries aquarium in Washington, D.C, are being tried out as plumber’s assistants to open up clogged pipes. Placed in a length of pipe that is stopped up with silt and sediment, the reptile digs his way through, opening up a small hole which water later will widen by its pressure as it sweeps through. 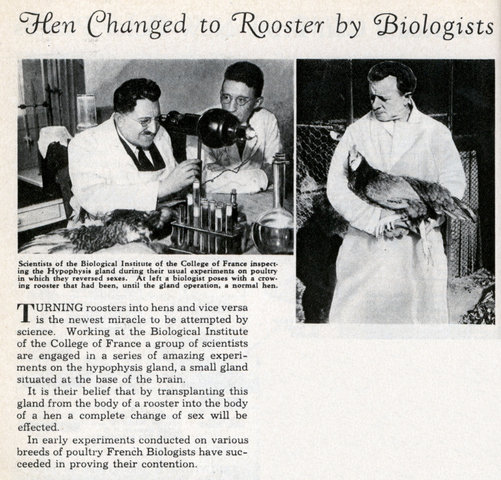 Hen Changed to Rooster by Biologists

TURNING roosters into hens and vice versa is the newest miracle to be attempted by science. Working at the Biological Institute of the College of France a group of scientists are engaged in a series of amazing experiments on the hypophysis gland, a small gland situated at the base of the brain.

It is their belief that by transplanting this gland from the body of a rooster into the body of a hen a complete change of sex will be effected.

In early experiments conducted on various breeds of poultry French Biologists have succeeded in proving their contention. 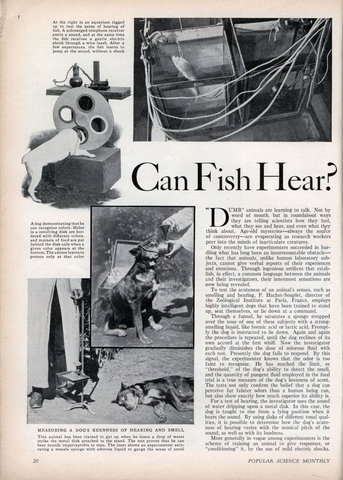 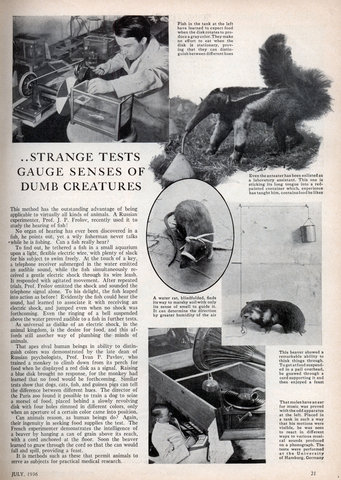 “DUMB” animals are learning to talk. Not by ord of mouth, but in roundabout ways they are telling scientists how they feel, what they see and hear, and even what they think about. Age-old mysteriesâ€”always the source of controversyâ€”are evaporating as research workers peer into the minds of inarticulate creatures.

Only recently have experimenters succeeded in hurdling what has long been an insurmountable obstacleâ€” the fact that animals, unlike human laboratory subjects, cannot give verbal reports of their experiences and emotions. Through ingenious artifices that establish, in effect, a common language between the animals and their investigators, their innermost sensations are now being revealed.

Popular Science
Issue: Dec, 1930
Posted in: Other Animals, Sign of the Times
1 Comment on Use Five Farms as Big Laboratory to Watch Electricity at Work (Dec, 1930)

Use Five Farms as Big Laboratory to Watch Electricity at Work (Dec, 1930) 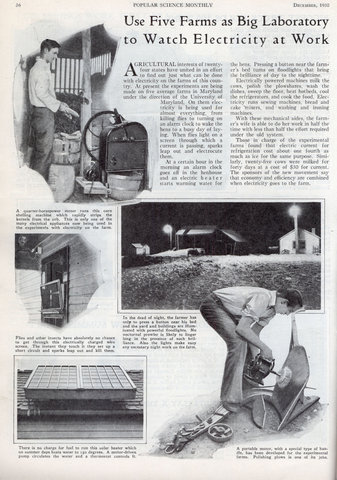 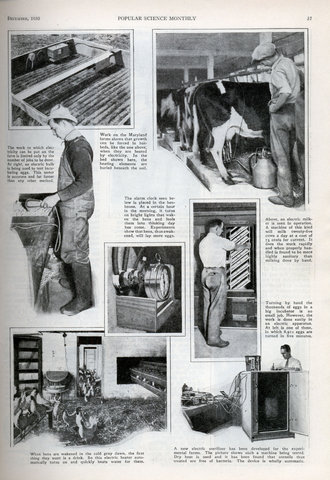 Use Five Farms as Big Laboratory to Watch Electricity at Work

AGRICULTURAL interests of twenty-four states have united in an effort to find out just what can be done with electricity on the farms of this country. At present the experiments are being made on five average farms in Maryland under the direction of the University of Maryland. On them electricity is being used for almost everything, from killing flies to turning on an alarm clock to wake the hens to a busy day of laying. When flies light on a screen through which a current is passing, sparks leap out and electrocute them.

Can you guess what song is now stuck in my head? 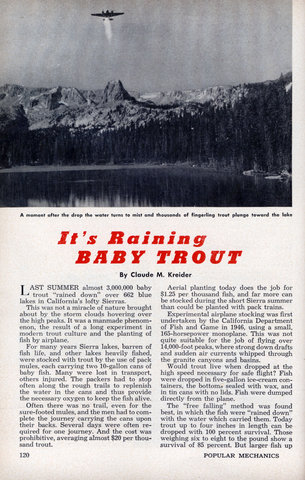 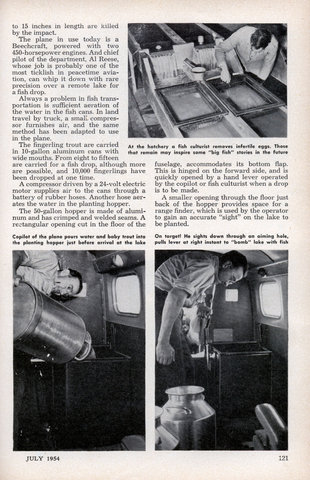 This was not a miracle of nature brought about by the storm clouds hovering over the high peaks. It was a manmade phenomenon, the result of a long experiment in modern trout culture and the planting of fish by airplane.

For many years Sierra lakes, barren of fish life, and other lakes heavily fished, were stocked with trout by the use of pack mules, each carrying two 10-gallon cans of baby fish. Many were lost in transport, others injured. The packers had to stop often along the rough trails to replenish the water in the cans and thus provide the necessary oxygen to keep the fish alive.

Often there was no trail, even for the sure-footed mules, and the men had to complete the journey carrying the cans upon their backs. Several days were often required for one journey. And the cost was prohibitive, averaging almost $20 per thousand trout.

Popular Science
Issue: May, 1945
Posted in: Other Animals, War
No Comments on Army Snake Hunters (May, 1945) 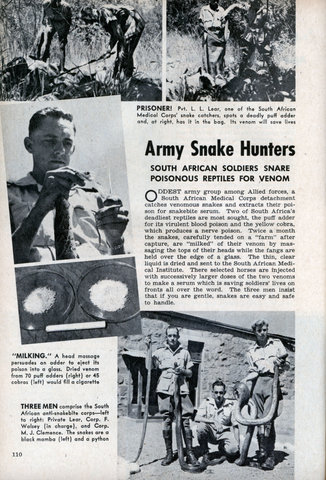 ODDEST army group among Allied forces, a South African Medical Corps detachment catches venomous snakes and extracts their poison for snakebite serum. Two of South Africa’s deadliest reptiles are most sought, the puff adder for its virulent blood poison and the yellow cobra, which produces a nerve poison. Twice a month the snakes, carefully tended on a “farm” after capture, are “milked” of their venom by massaging the tops of their heads while the fangs are held over the edge of a glass. The thin, clear liquid is dried and sent to the South African Medical Institute. There selected horses are injected with successively larger doses of the two venoms to make a serum which is saving soldiers’ lives on fronts all over the word. The three men insist that if you are gentle, snakes are easy and safe to handle.