The “Thinker” device sounds like B.S.. They admit that it has to be “pumped” with answers. My guess is that it either it just spits out the next answer in it’s queue when a button is pressed (I doubt the mike is hooked up to anything). Or, more likely, it’s just a complete fake and there is someone controlling it. It sure as hell doesn’t have voice recognition in 1955. 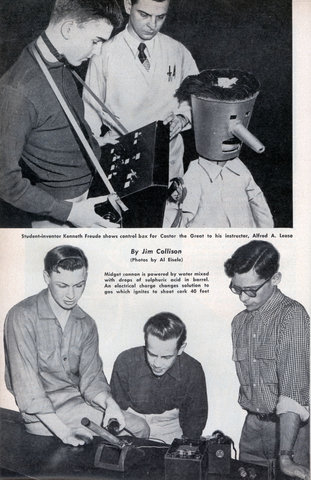 AN ELECTRONIC THINKERâ€”a completely mechanical robot â€” built by Robert Kotsmith, 16, and Michael Chmielewski, 17, high-school juniors at Foley, Minn., is passing exams of a factual nature that would stump any uneducated robot.

The machine, built during a period of 10 months at an estimated cost of only $120, understands and answers the human voice. The Thinker answers mathematical questions, gives data on current events and history, writes and even learns new facts it does not already know.

Even to persons well versed on scientific progress, this project seems astounding. Foley science instructor Alfred A. Lease says this of his students: “Their accomplishments would make some college graduates look on with envy.”

Popular Electronics
Issue: Apr, 1956
Posted in: Ahead of its time, Origins, Telephone
1 Comment on The First Ring Tone (Apr, 1956)

Telephones Will “Ring” With Musical Tones
Telephone users will welcome the news that the Bell Telephone Laboratories is experimenting with a new device that will eliminate the b-r-r-r-ing of present-day instruments. The gadget, using transistors, will produce pleasant musical tones resembling those of a clarinet. Sound emanates through the louvred area at the base of the set, shown in the photo with a white background.
This device requires less than 1 volt for operation; the ordinary telephone bell needs about 85 volts. A full-scale field trial of the new equipment is expected to provide enough technical data and customers’ reactions to help determine its future.

Popular Electronics
Issue: Jun, 1958
Posted in: Ahead of its time, DIY, Origins, Telephone
No Comments on Build your own answering machine (Jun, 1958)

Build your own answering machine (Jun, 1958)

“Impossible, you say? The miracle of electronics has all but removed the word “impossible” from the dictionary.”

HOW WOULD YOU LIKE to have a secretary who will answer your phone and take messages at any hour of the day or night but who will demand no pay and no coffee breaks? Impossible, you say? The miracle of electronics has all but removed the word “impossible” from the dictionary.

There are two types of systems you can build which will do this job for you. The deluxe system requires two tape machines or one tape machine and one disc machineâ€” when a call comes in, it plays a recording of instructions and then switches over to record the message. The simpler type, to be described here, requires only one recorder and anyone who can put together a small amplifier can build it.

This would be a lot of fun without a text editor. One mistake and you have to start over.
More about ASCII Art on Wikipedia. 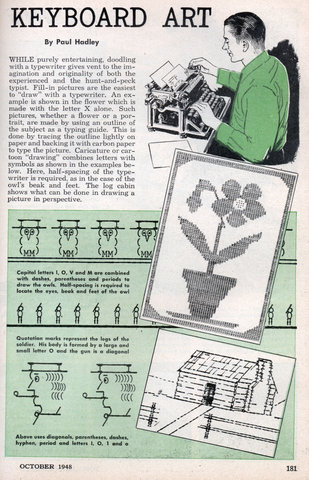 KEYBOARD ART
By Paul Hadley
WHILE purely entertaining, doodling with a typewriter gives vent to the imagination and originality of both the experienced and the hunt-and-peck typist. Fill-in pictures are the easiest to “draw” with a typewriter. An example is shown in the flower which is made with the letter X alone. Such pictures, whether a flower or a portrait, are made by using an outline of the subject as a typing guide. This is done by tracing the outline lightly on paper and backing it with carbon paper to type the picture. Caricature or cartoon “drawing” combines letters with symbols as shown in the examples below. Here, half-spacing of the typewriter is required, as in the case of the owl’s beak and feet. The log cabin shows what can be done in drawing a picture in perspective.

I have an issue of this and will be scanning in some of the projects. However I must say, the current Make is much more interesting. 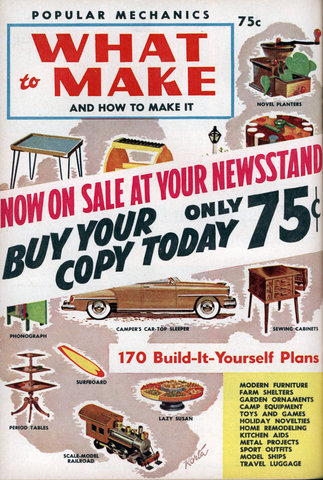 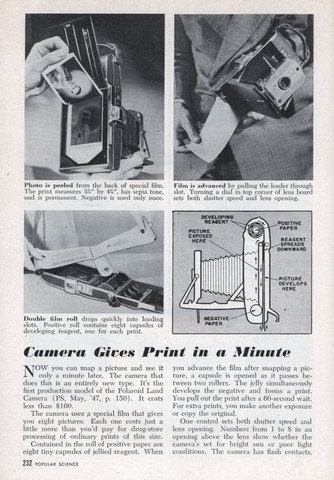 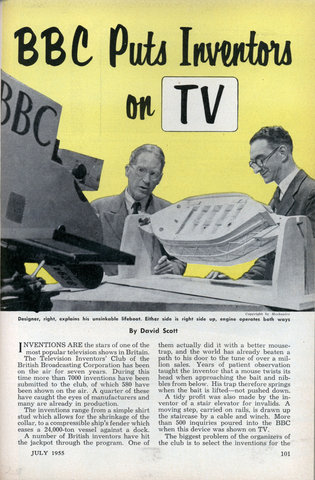 This is an excellent 1953 article on the beginnings of forensic science. It covers the establisment of a forensic school at harvard, the switch from untrained coroners to skilled medical examiners and all sorts of modern forensic techniques. It also has pictures of amazingly detailed models made to recreate crime scenes for instructional purposes. 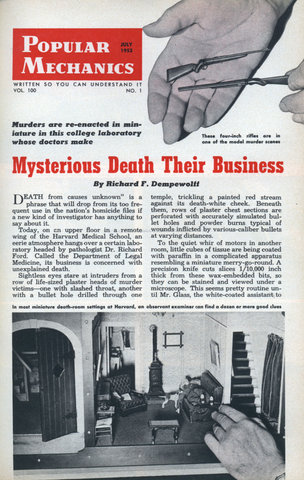 Death from causes unknown is a phrase that will drop from its too frequent use in the nation’s homicide files if a new kind of investigator has anything to say about it.

Today, on en upper floor in a remote wing of the Harvard Medical School, an eerie atmosphere hangs over a certain laboratory headed by pathologist Dr. Richard Ford. Called the Department of Legal Medicine, its business is concerned with unexplained death.

Sightless eyes stare at intruders from a row of life-sized plaster heads of murder victimsâ€”one with slashed throat, another with a bullet hole drilled through one temple, trickling a painted red stream against its death-white cheek. Beneath them, rows of plaster chest sections are perforated with accurately simulated bullet holes and powder burns typical of wounds inflicted by various-caliber bullets at varying distances. 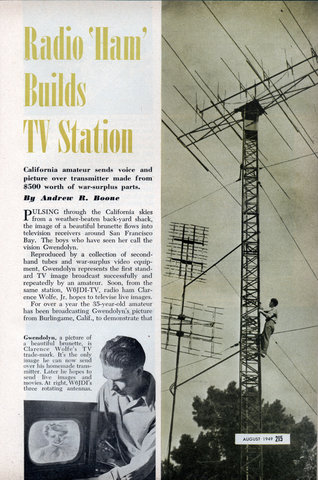 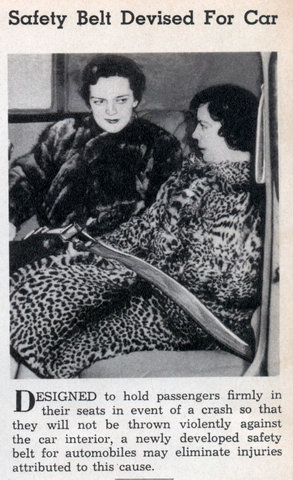 Safety Belt Devised For Car
DESIGNED to hold passengers firmly in their seats in event of a crash so that they will not be thrown violently against the car interior, a newly developed safety belt for automobiles may eliminate injuries attributed to this cause.