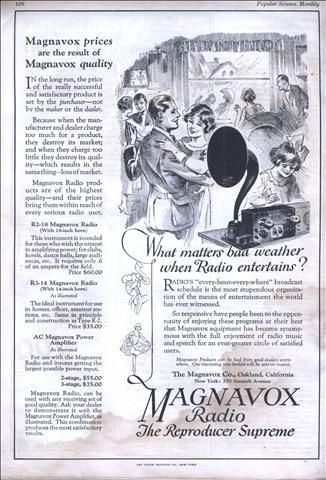 RADIO’S “every-hour-every-where” broadcast schedule is the most stupendous organization of the means of entertainment the world has ever witnessed.

So responsive have people been to the opportunity of enjoying these programs at their best that Magnavox equipment has become synonymous with the full enjoyment of radio music and speech for an ever-greater circle of satisfied users. 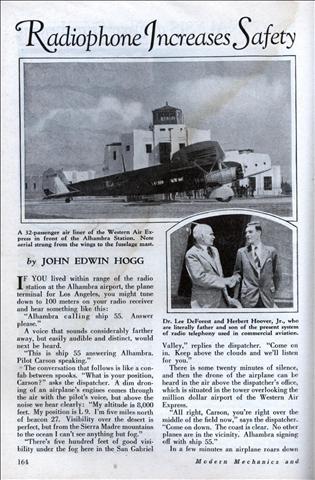 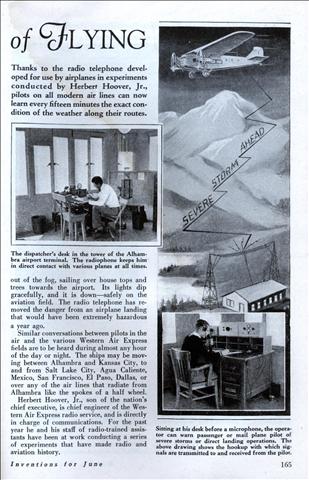 Thanks to the radio telephone developed for use by airplanes in experiments conducted by Herbert Hoover, Jr., pilots on all modern air lines can now learn every fifteen minutes the exact condition of the weather along their routes.

IF YOU lived within range of the radio station at the Alhambra airport, the plane terminal for Los Angeles, you might tune down to 100 meters on your radio receiver and hear something like this: “Alhambra calling ship 55. Answer please.”

A voice that sounds considerably farther away, but easily audible and distinct, would next be heard. 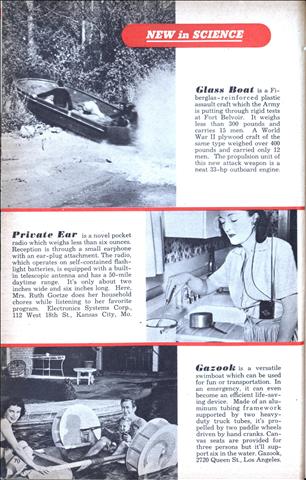 Glass Boat is a Fiberglas-reinforced plastic assault craft which the Army is putting through rigid tests at Fort Belvoir. It weighs less than 300 pounds and carries 15 men. A World War II plywood craft of the same type weighed over 400 pounds and carried only 12 men. The propulsion unit of this new attack weapon is a neat 33-hp outboard engine.

Mechanix Illustrated
Issue: May, 1950
Posted in: Radio
Tags: CB Radio, FCC
6 Comments on What Happened to the Citizens Radio Band? (May, 1950) 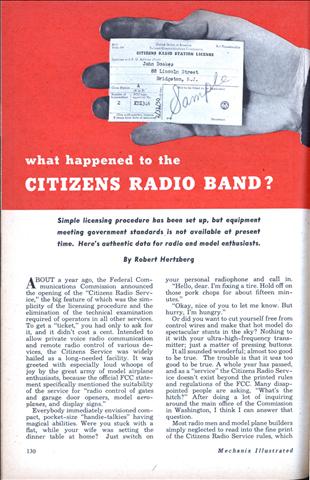 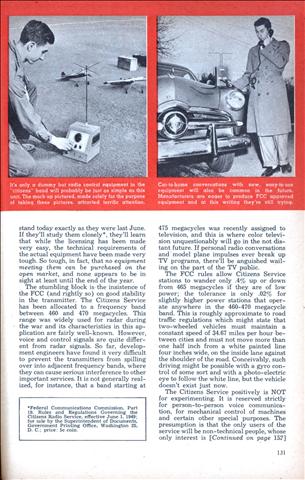 What Happened to the Citizens Radio Band?

Simple licensing procedure has been set up, but equipment meeting government standards is not available at present time. Here’s authentic data for radio and model enthusiasts.

ABOUT a year ago, the Federal Communications Commission announced the opening of the “Citizens Radio Service,” the big feature of which was the simplicity of the licensing procedure and the elimination of the technical examination required of operators in all other services. To get a “ticket,” you had only to ask for it, and it didn’t cost a cent.

“BULLEEVE ME!” New tubes do make a difference when you listen to Fanny Brice.

Don’t buy any tubes today without knowing that you are getting these 5 remarkable improvements that will really put new life in your set! These great advances have come out of the RCA Radiotron Company’s laboratories, developed by world-famous engineers for you. 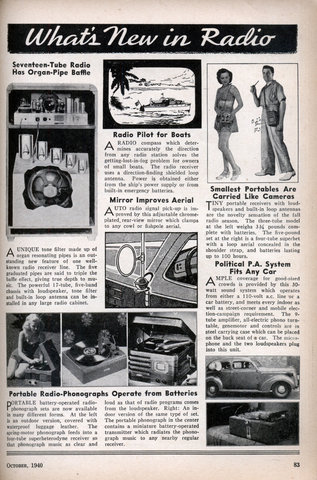 A UNIQUE tone filter made up of organ resonating pipes is an outstanding new feature of one well-known radio receiver line. The five graduated pipes are said to triple the baffle effect, giving true depth to music. The powerful 17-tube, five-band chassis with loudspeaker, tone filter and built-in loop antenna can be installed in any large radio cabinet.

You can hear Phil Cook being interviewed in this 29 December 1940 episode of Behind The Mike. 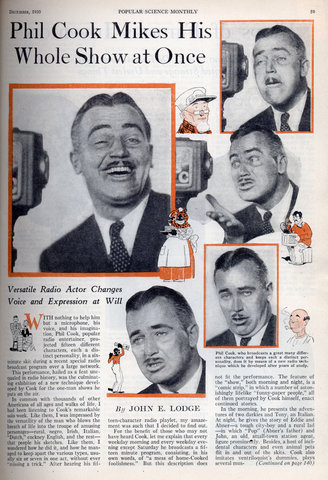 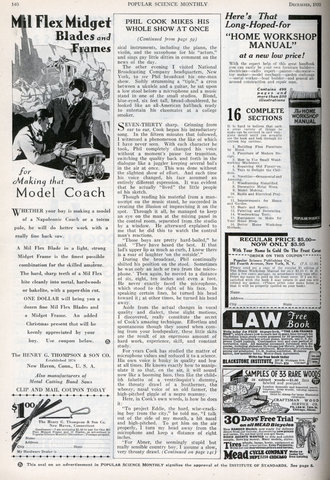 Phil Cook Mikes His Whole Show at Once

Versatile Radio Actor Changes Voice and Expression at Will.

WITH nothing to help him but a microphone, his voice, and his imagination, Phil Cook, popular radio entertainer, projected fifteen different characters, each a distinct personality, in a six-minute skit during a recent special radio broadcast program over a large network.

This performance, hailed as a feat unequaled in radio history, was the culminating exhibition of a new technique developed by Cook for the one-man shows he puts on the air. 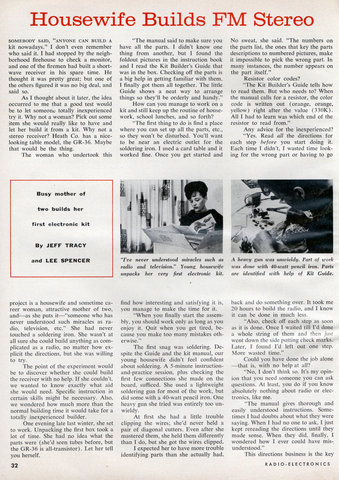 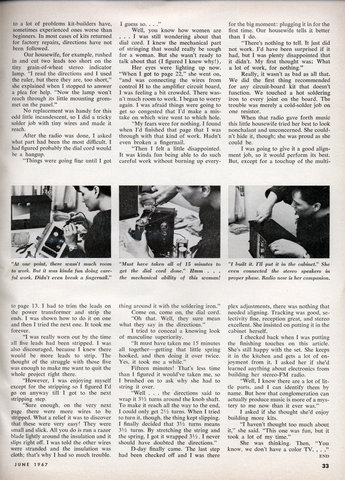 By JEFF TRACY and LEE SPENCER

SOMEBODY SAID, “ANYONE CAN BUILD A kit nowadays.” I don’t even remember who said it. I had stopped by the neighborhood firehouse to check a monitor, and one of the firemen had built a shortwave receiver in his spare time. He thought it was pretty great; but one of the others figured it was no big deal, and said so. 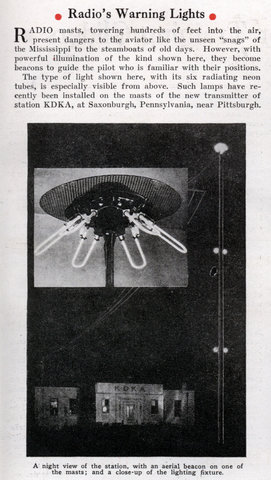 RADIO masts, towering hundreds of feet into the air, present dangers to the aviator like the unseen “snags” of the Mississippi to the steamboats of old days. However, with powerful illumination of the kind shown here, they become beacons to guide tlie pilot who is familiar with their positions.

The type of light shown here, with its six radiating neon tubes, is especially visible from above. Such lamps have recently been installed on the masts of the new transmitter of station KDKA, at Saxonburgh, Pennsylvania, near Pittsburgh.

Broadcasting from a Submarine (Mar, 1931) 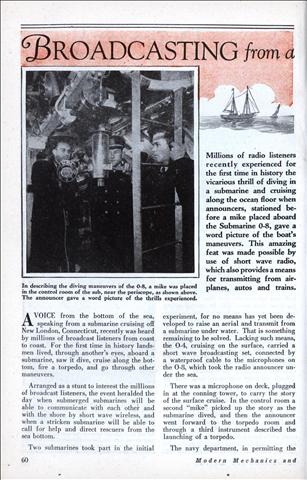 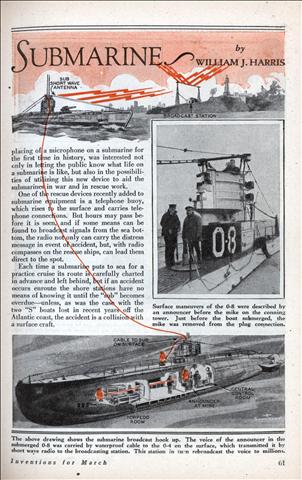 Broadcasting from a Submarine

Millions of radio listeners recently experienced for the first time in history the vicarious thrill of diving in a submarine and cruising along the ocean floor when announcers, stationed before a mike placed aboard the Submarine 0-8, gave a word picture of the boat’s maneuvers. This amazing feat was made possible by use of short wave radio, which also provides a means for transmitting from airplanes, autos and trains.