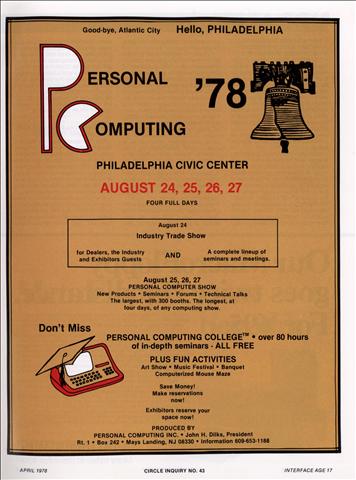 Popular Electronics
Issue: Jan, 1978
Posted in: Advertisements, Computers
Tags: computer ads
3 Comments on OUR OWN SOFTWARE – OUR OWN HARDWARE – A perfect team from the Digital Group (Jan, 1978)

OUR OWN SOFTWARE – OUR OWN HARDWARE – A perfect team from the Digital Group (Jan, 1978) 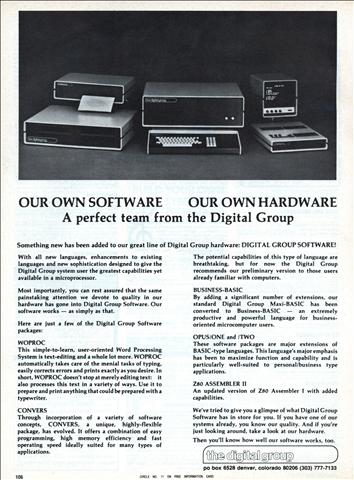 Something new has been added to our great line of Digital Group hardware: DIGITAL GROUP SOFTWARE!

With all new languages, enhancements to existing languages and new sophistication designed to give the Digital Group system user the greatest capabilities yet available in a microprocessor.

Most importantly, you can rest assured that the same painstaking attention we devote to quality in our hardware has gone into Digital Group Software. Our software works — as simply as that. 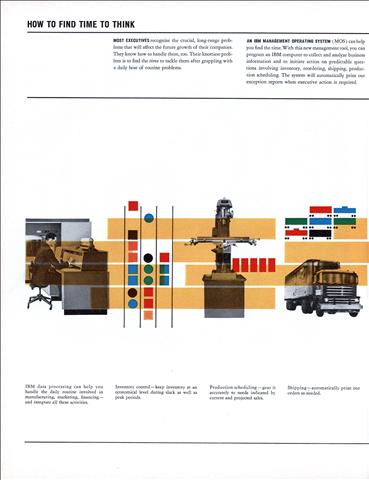 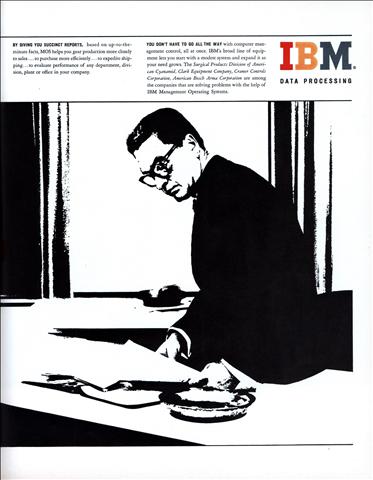 HOW TO FIND TIME TO THINK

MOST EXECUTIVES recognize the crucial, long-range problems that will affect the future growth of their companies. They know how to handle them, too. Their knottiest problem is to find the time to tackle them after grappling with a daily host of routine problems.

AN IBM MANAGEMENT OPERATING SYSTEM (MOS) can help you find the time. With this new management tool, you can program an IBM computer to collect and analyze business information and to initiate action on predictable questions involving inventory, reordering, shipping, production scheduling. The system will automatically print out exception reports when executive action is required. 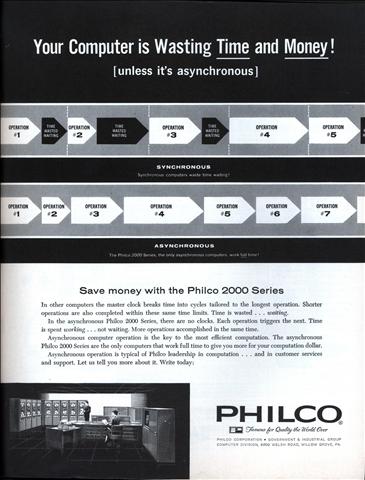 Your Computer is Wasting Time and Money!

Save money with the Philco 2000 Series

In other computers the master clock breaks time into cycles tailored to the longest operation. Shorter operations are also completed within these same time limits. Time is wasted… waiting.

In the asynchronous Philco 2000 Series, there are no clocks. Each operation triggers the next. Time is spent working… not waiting. More operations accomplished in the same time. 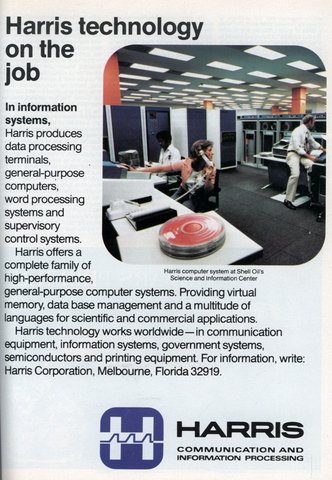 Harris technology on the job

Harris offers a complete family of high-performance, general-purpose computer systems. Providing virtual memory, data base management and a multitude of languages for scientific and commercial applications. 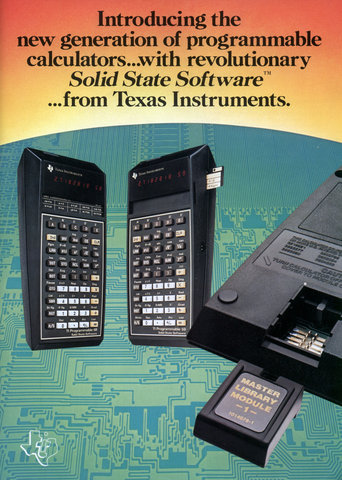 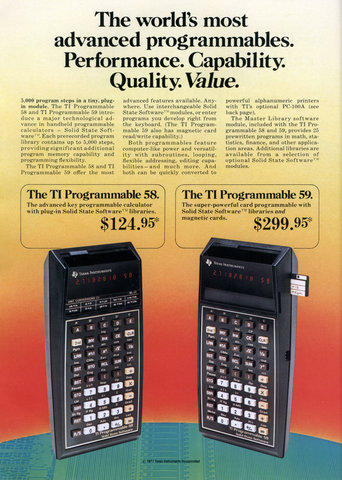 The world’s most advanced programmables.

That Televideo keyboard has a really weird, narrow numeric keypad. Also, it today’s dollars it would cost $716 in today’s dollars, which is pretty insane for a keyboard. KeyTronic is still around and they still sell keyboards, though it looks like they haven’t designed a new one in the last decade. They’ve shifted almost exclusively over to producing products for other companies. 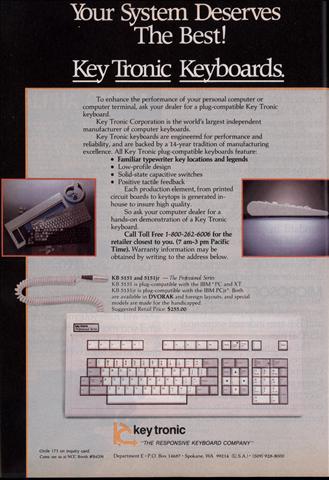 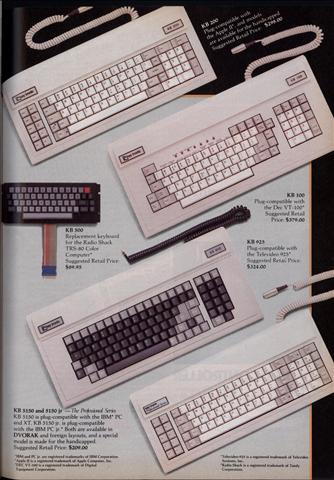 Your System Deserves The Best!

To enhance the performance of your personal computer or computer terminal, ask your dealer for a plug-compatible Key Tronic keyboard. 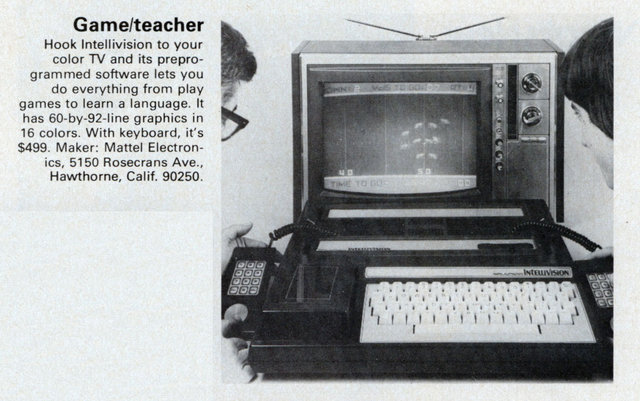 Hook Intellivision to your color TV and its preprogrammed software lets you do everything from play games to learn a language. It has 60-by-92-line graphics in 16 colors. With keyboard, it’s $499. Maker: Mattel Electronics, 5150 Rosecrans Ave., Hawthorne, Calif. 90250.

I wouldn’t trust anything less than Scotch Brand Diskettes to make a long story short! (May, 1982) 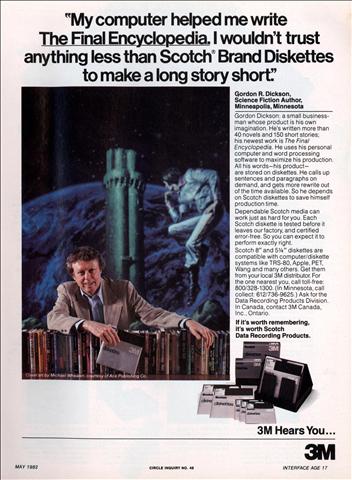 “My computer helped me write The Final Encyclopedia. I wouldn’t trust anything less than Scotch Brand Diskettes to make a long story short!”

Gordon Dickson: a small businessman whose product is his own imagination. He’s written more than 40 novels and 150 short stories; his newest work is The Final Encyclopedia. He uses his personal computer and word processing software to maximize his production. All his words-his product-are stored on diskettes. 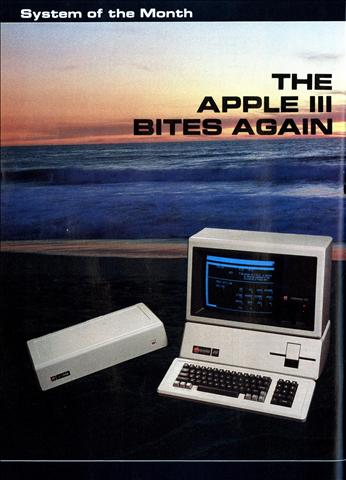 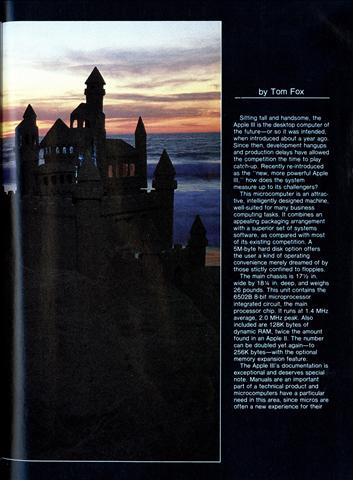