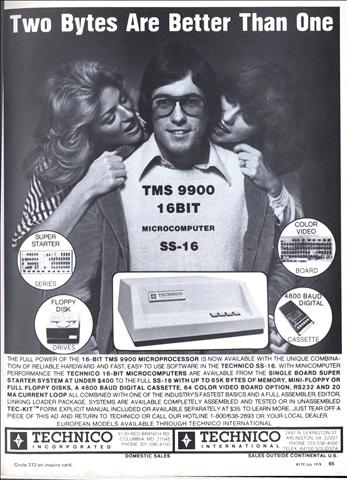 TMS 9900 16BIT MICROCOMPUTER SS-16 THE FULL POWER OF THE 1 6-BIT TMS 9900 MICROPROCESSOR IS NOW AVAILABLE WITH THE UNIQUE COMBINATION OF RELIABLE HARDWARD AND FAST, EASY TO USE SOFTWARE IN THE TECHNICO SS-16. WITH MINICOMPUTER PERFORMANCE THE TECHNICO 16-BIT MICROCOMPUTERS ARE AVAILABLE FROM THE SINGLE BOARD SUPER STARTER SYSTEM AT UNDER $400 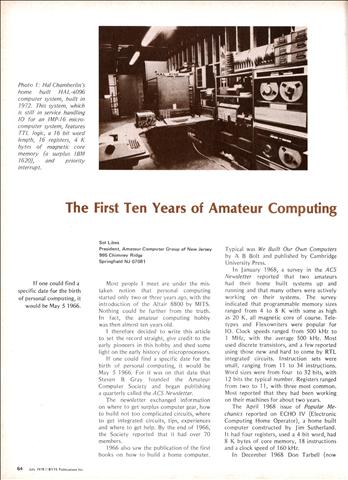 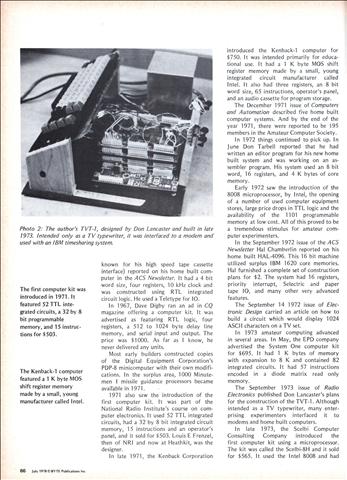 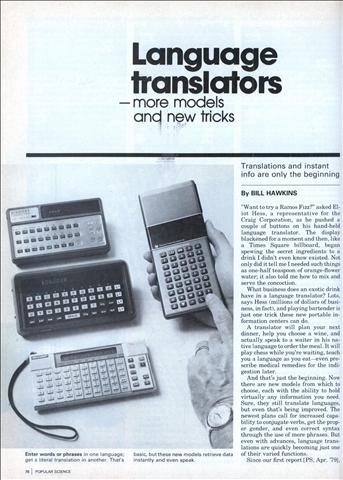 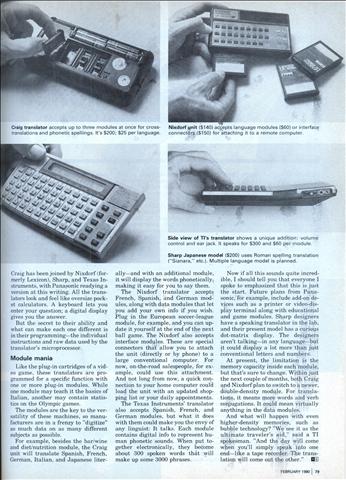 Translations and instant info are only the beginning

“Want to try a Ramos Fizz?” asked Eliot Hess, a representative for the Craig Corporation, as he pushed a couple of buttons on his hand-held language translator. The display blackened for a moment and then, like a Times Square billboard, began spewing the secret ingredients to a drink I didn’t even know existed. Not only did it tell me I needed such things as one-half teaspoon of orange-flower water; it also told me how to mix and serve the concoction.

My first modem was an external 300 baud Hayes connected to an Apple IIc (there was no place inside to stick one). Man, even in 1987 300 buad was slow. It was easy to out type the display. Later, in high school I ran my own BBS, on a Supra 14.4, one of the fancy ones with the vacuum fluorescent display. I still cringe when I think about all of the hours I spent tweaking the Hayes initialization string to get everything working right. 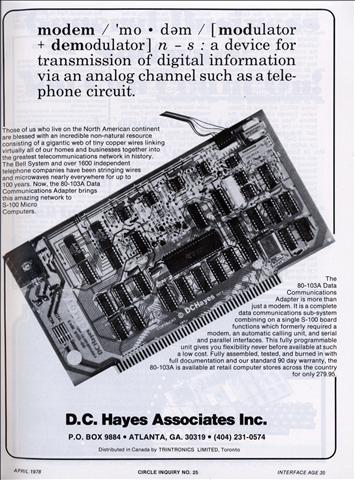 modem / ‘mo • dam / [modulator + demodulator] n – s : a device for transmission of digital information via an analog channel such as a telephone circuit.

Those of us who live on the North American continent are blessed with an incredible non-natural resource consisting of a gigantic web of tiny copper wires linking virtually all of our homes and businesses together into the greatest telecommunications network in history. The Bell System and over 1600 independent telephone companies have been stringing wires and microwaves nearly everywhere for up to 100 years. Now, the 80-103A Data Communications Adapter brings this amazing network to S-100 Micro Computers.

Interface Age
Issue: May, 1982
Posted in: Computers
5 Comments on Whatever Happened to Computer Hobbyists? (May, 1982)

Whatever Happened to Computer Hobbyists? (May, 1982) 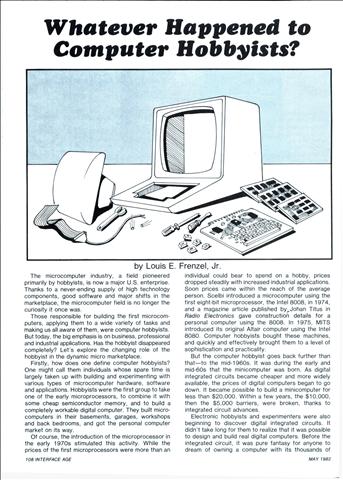 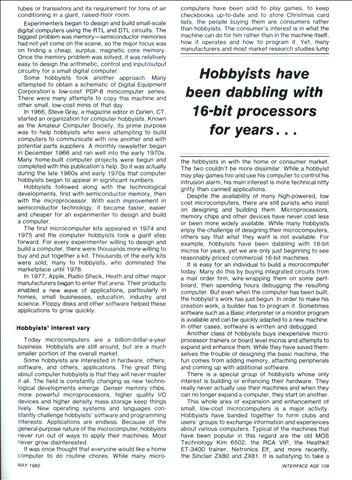 Whatever Happened to Computer Hobbyists?

The microcomputer industry, a field pioneered primarily by hobbyists, is now a major U.S. enterprise. Thanks to a never-ending supply of high technology components, good software and major shifts in the marketplace, the microcomputer field is no longer the curiosity it once was.

Those responsible for building the first microcomputers, applying them to a wide variety of tasks and making us all aware of them, were computer hobbyists. But today, the big emphasis is on business, professional and industrial applications. Has the hobbyist disappeared completely? Let’s explore the changing role of the hobbyist in the dynamic micro marketplace. 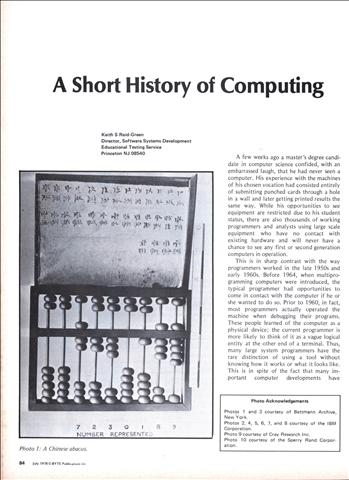 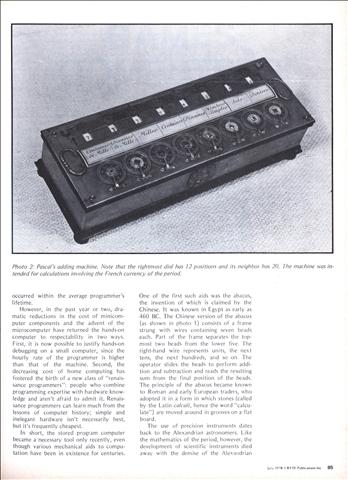 A Short History of Computing

A few weeks ago a master’s degree candidate in computer science confided, with an embarrassed laugh, that he had never seen a computer. His experience with the machines of his chosen vocation had consisted entirely of submitting punched cards through a hole in a wall and later getting printed results the same way. While his opportunities to see equipment are restricted due to his student status, there are also thousands of working programmers and analysts using large scale equipment who have no contact with existing hardware and will never have a chance to see any first or second generation computers in operation.

Can you identify this face? It’s a well-known President who freed the slaves and was shot in Ford’s theatre. Still stumped? Try viewing it at arm’s length, or squinting, or jiggling the page rapidly. This picture represents a Bell Labs experiment to learn the least amount of visual information a picture can contain and still be recognizable—of some concern to designers of Picture- phones. Here a computer has riven a portrait into 200 squares, each rendered in an even tone of gray along an intensity scale from one to sixteen.

Choose your course with this computerized golf game (Feb, 1980) 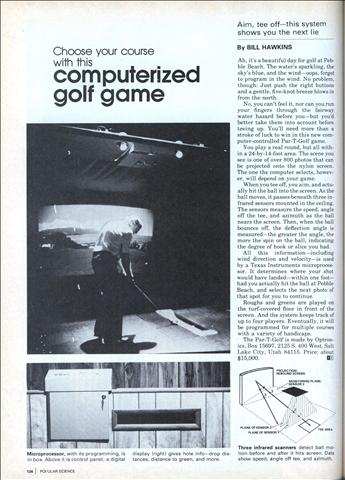 Choose your course with this computerized golf game

Aim, tee off—this system shows you the next lie By BILL HAWKINS

Ah, it’s a beautiful day for golf at Pebble Beach. The water’s sparkling, the sky’s blue, and the wind—oops, forgot to program in the wind. No problem, though: Just push the right buttons and a gentle, five-knot breeze blows in from the north.

No, you can’t feel it, nor can you run your fingers through the fairway water hazard before you—but you’d better take them into account before teeing up. You’ll need more than a stroke of luck to win in this new computer-controlled Par-T-Golf game. 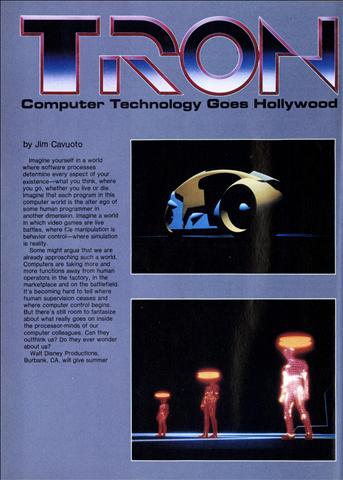 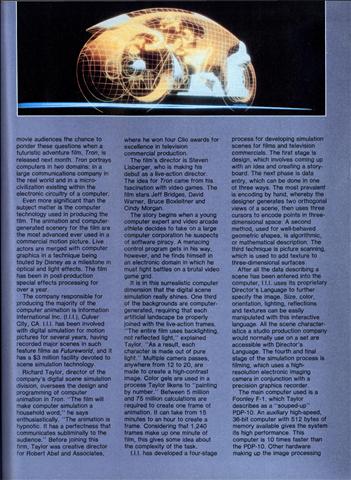 Imagine yourself in a world where software processes determine every aspect of your existence—what you think, where you go, whether you live or die. Imagine that each program in this computer world is the alter ego of some human programmer in another dimension. Imagine a world in which video games are live battles, where file manipulation is behavior control—where simulation is reality.

Some might argue that we are already approaching such a world. Computers are taking more and more functions away from human operators in the factory, in the marketplace and on the battlefield. It’s becoming hard to tell where human supervision ceases and where computer control begins.

Interface Age
Issue: May, 1982
Posted in: Computers
Tags: Compuserve
9 Comments on NETWORKING (May, 1982) 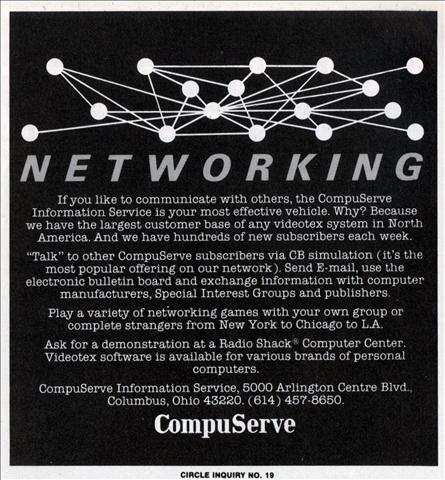 If you like to communicate with others, the CompuServe Information Service is your most effective vehicle. Why? Because we have the largest customer base of any videotex system in North America. And we have hundreds of new subscribers each week.