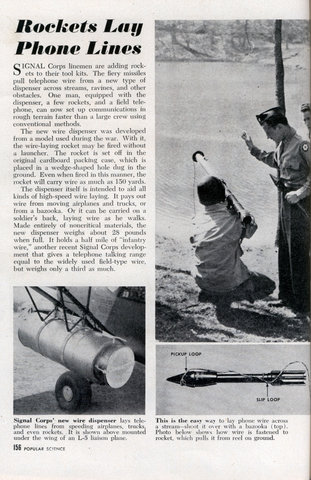 SIGNAL Corps linemen are adding rockets to their tool kits. The fiery missiles pull telephone wire from a new type of dispenser across streams, ravines, and other obstacles. One man, equipped with the dispenser, a few rockets, and a field telephone, can now set up communications in rough terrain faster than a large crew using conventional methods.

The new wire dispenser was developed from a model used during the war. With it. the wire-laying rocket may be fired without a launcher. The rocket is set off in the original cardboard packing case, which is placed in a wedge-shaped hole dug in the ground. Even when fired in this manner, the rocket will carry wire as much as 150 yards. 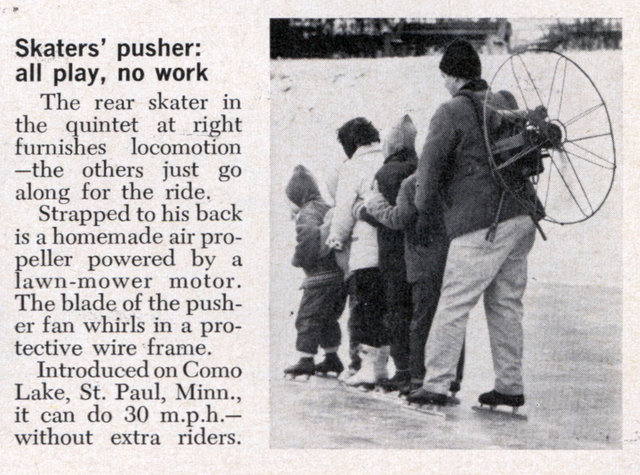 Skaters’ pusher: all play, no work

The rear skater in the quintet at right furnishes locomotion â€”the others just go along for the ride.

Strapped to his back is a homemade air propeller powered by a lawn-mower motor. The blade of the pusher fan whirls in a protective wire frame.

The Piedmont Hospital in Atlanta, Ga. is equipped with a spiral chute by means of which bed-ridden patients can reach the ground quickly in the event of fire. On each floor of the hospital there is an entrance to the chute and in an emergency the patients are slid down it on a mattress. 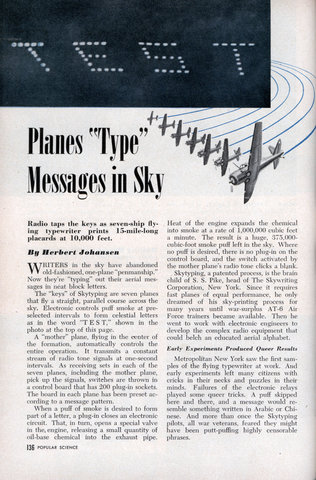 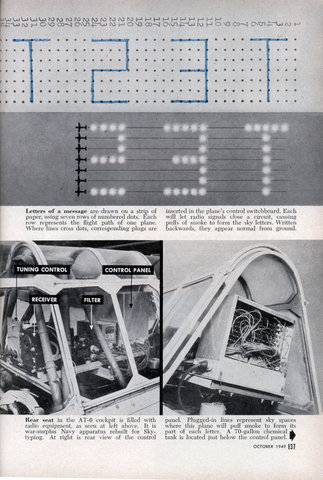 WRITERS in the sky have abandoned old-fashioned, one-plane “penmanship.” Now they’re “typing” out their aerial messages in neat block letters.

The “keys” of Skytyping are seven planes that fly a straight, parallel course across the sky. Electronic controls puff smoke at preselected intervals to form celestial letters as in the word “T E S T,” shown in the photo at the top of this page.

A “mother” plane, flying in the center of the formation, automatically controls the entire operation. It transmits a constant stream of radio tone signals at one-second intervals. As receiving sets in each of the seven planes, including the mother plane, pick up the signals, switches are thrown in a control board that has 200 plug-in sockets. The board in each plane has been preset according to a message pattern.

Fountains of Flame Played Like a Pipe Organ (Aug, 1939) 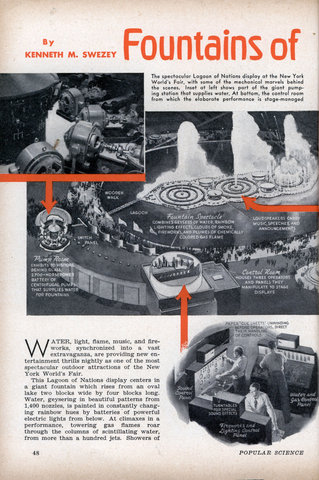 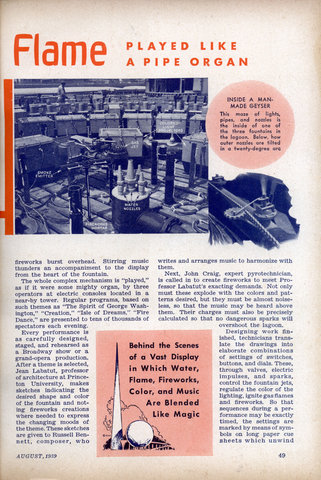 WATER, light, flame, music, and fireworks, synchronized into a vast extravaganza, are providing new entertainment thrills nightly as one of the most spectacular outdoor attractions of the New York World’s Fair.

This Lagoon of Nations display centers in a giant fountain which rises from an oval lake two blocks wide by four blocks long. Water, geysering in beautiful patterns from 1,400 nozzles, is painted in constantly changing rainbow hues by batteries of powerful electric lights from below. At climaxes in a performance, towering gas flames roar through the columns of scintillating water, from more than a hundred jets. Showers of fireworks burst overhead. Stirring music thunders an accompaniment to the display from the heart of the fountain.

Music visualizations that beat WinAmp by about 70 years. 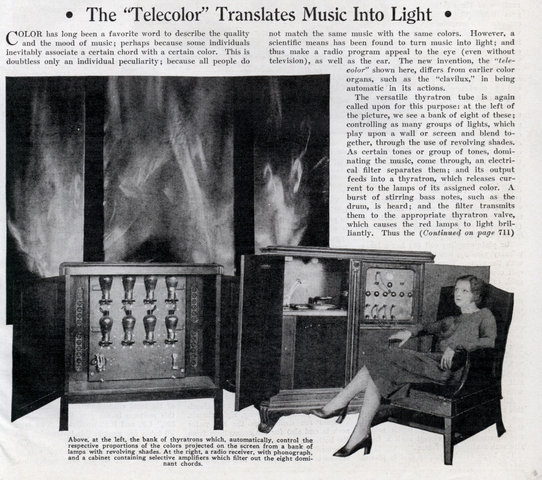 The “Telecolor” Translates Music Into Light

COLOR has long been a favorite word to describe the quality and the mood of music; perhaps because some individuals inevitably associate a certain chord with a certain color. This is doubtless only an individual peculiarity; because all people do not match the same music with the same colors. However, a scientific means has been found to turn music into light; and thus make a radio program appeal to the eye (even without television), as well as the ear. The new invention, the “tele-color” shown here, differs from earlier color organs, such as the “clavilux,” in being automatic in its actions.

Even Necktie Designers Can Use Electrons (Dec, 1947) 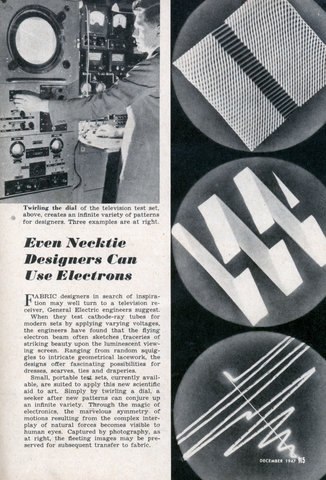 Even Necktie Designers Can Use Electrons

When they test cathode-ray tubes for modern sets by applying varying voltages, the engineers have found that the flying electron beam often sketches traceries of striking beauty upon the luminescent viewing screen. Ranging from random squig-gles to intricate geometrical lacework, the designs offer fascinating possibilities for dresses, scarves, ties and draperies.

Car “Crashes” Wall 24 Hours a Day
Motorists driving on Route 78 near Escondido, Calif., are startled momentarily by the sight of a car “crashing” into a restaurant. A closer look reassures them, however, since the car is really only half a car and the “crash” is painted on. The restaurant is located on a sharp curve, thus heightening the effect. 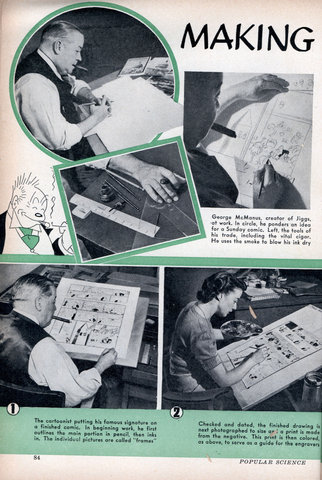 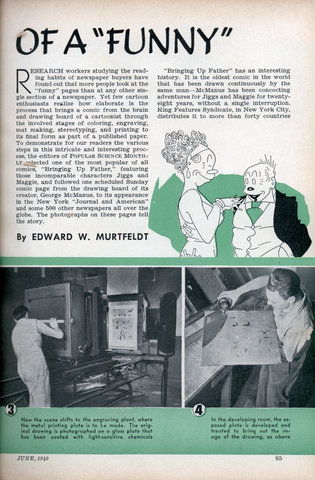 RESEARCH workers studying the reading habits of newspaper buyers have found out that more people look at the “funny” pages than at any other single section of a newspaper. Yet few cartoon enthusiasts realize how elaborate is the process that brings a comic from the brain and drawing board of a cartoonist through the involved stages of coloring, engraving, mat making, stereotyping, and printing to its final form as
part of a published paper.

This is so cool. I wish Les Paul would start a private radio station in my building! 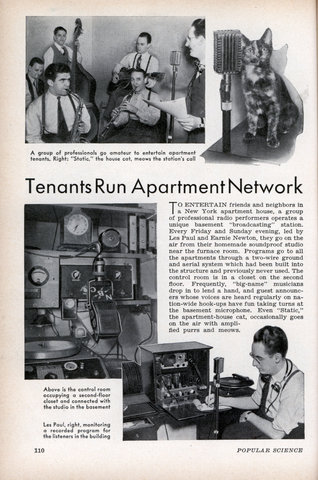 Tenants Run Apartment Network
TO ENTERTAIN friends and neighbors in a New York apartment house, a group of professional radio performers operates a unique basement “broadcasting” station. Every Friday and Sunday evening, led by Les Paul and Earnie Newton, they go on the air from their homemade soundproof studio near the furnace room. Programs go to all the apartments through a two-wire ground and aerial system which had been built into the structure and previously never used.