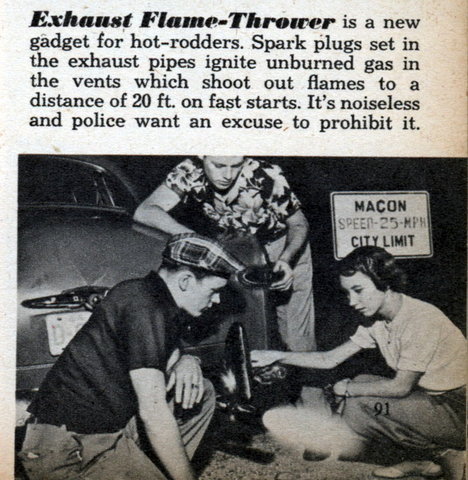 Exhaust Flame-Thrower is a new gadget for hot-rodders. Spark plugs set in the exhaust pipes ignite unburned gas in the vents which shoot out flames to a distance of 20 ft. on fast starts. It’s noiseless and police want an excuse to prohibit it.

Popular Science
Issue: Dec, 1946
Posted in: Cool, Sign of the Times, Toys and Games
Tags: christmas
5 Comments on The Return of The Toys (Dec, 1946)

Gallery of new toys for the 1946 Christmas season, the first one toy makers could gear up for after WWII. Check out the “reaction jet engine” on page 3 and the proto-legos on the last page. 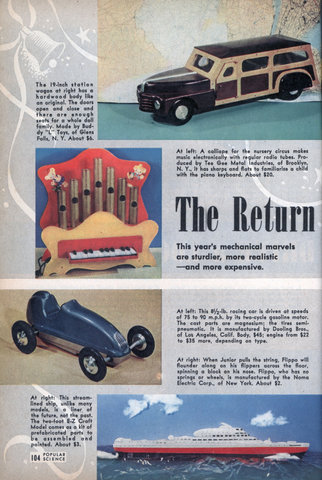 The Return of The Toys

What are the curved characters? 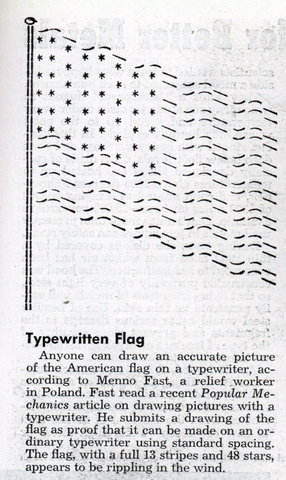 Typewritten Flag
Anyone can draw an accurate picture of the American flag on a typewriter, according to Menno Fast, a relief worker in Poland. Fast read a recent Popular Mechanics article on drawing pictures with a typewriter. He submits a drawing of the flag as proof that it can be made on an ordinary typewriter using standard spacing. The flag, with a full 13 stripes and 48 stars, appears to be rippling in the wind.

I love the name “Devil Junk” that he gave his jeep, though it does make it sound like the kid might have a heroin problem.

The midget jeep at the left was built by Valentin Labata. of Leyte. Philippine Islands. He starts his letter by asking, “I wonder if Filipinos are qualified to enter your Workbench Award contest?” They sure are, Val. We base our awards on ability, not nationality. He goes on to say. “A 3-hp. Wisconsin engine drives one rear wheel through a belt, giving 25 m.p.h, top speed and 75 to 80 miles per gallon. The brake works through the other rear wheel. I received help from my father, who donated the engine and the wheels, and two relatives. That’s me in the middle. The other two boys are the helpful relatives.”

Scientific American
Issue: Sep, 1952
Posted in: Ahead of its time, Computers, Cool
4 Comments on THE ROLE OF THE COMPUTER (Sep, 1952)

This is the third in a series of 5 articles I’ve scanned from an amazing 1952 issue of Scientific American about Automatic Control. Discussing automatic machine tools, feedback loops, and the role of computers in manufacturing and information theory, these are really astounding articles considering the time in which they were written. 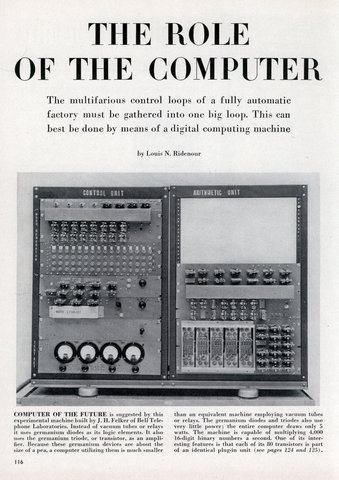 THE ROLE OF THE COMPUTER

The multifarious control loops of a fully automatic factory must be gathered into one big loop. This can best be done by means of a digital computing machine

IF THE thermostat is a prime elementary example of the principle of automatic control, the computer is its most sophisticated expression. The thermostat and other simple control mechanisms, such as the automatic pilot and engine-governor, are specialized devices limited to a single function. An automatic pilot can control an airplane but would be helpless if faced with the problem of driving a car. Obviously for fully automatic control we must have mechanisms that simulate the generalized abilities of a human being, who can operate the damper on a furnace, drive a car or fly a plane, set a rheostat to control a voltage, work the throttle of an engine, and do many other things besides. The modern computer is the first machine to approach such general abilities.

Computer is really an inadequate name for these machines. They are called computers simply because computation is the only significant job that has so far been given to them. The name has somewhat obscured the fact that they are capable of much greater generality. When these machines are applied to automatic control, they will permit a vast extension of the control artâ€” an extension from the use of rather simple specialized control mechanisms, which merely assist a human operator in doing a complicated task, to over-all controllers which will supervise a whole job. They will be able to do so more rapidly, more reliably, more cheaply and with just as much ingenuity as a human operator. 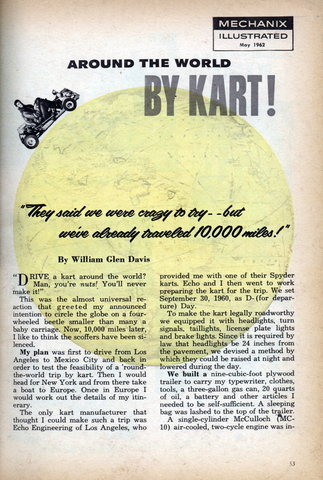 One interesting side note about this passage:

“Another man who made a highly profitable find in the food field in recent years is Leo Peters, originator of the “Pak” margarine package, made out of plastic and containing a capsule for coloring. By merely kneading the “Pak,” a housewife can give a pound of margarine the appetizing hue of butter. It took Peters a long time to put the idea across, but once it was accepted by manufacturers he began collecting royalties estimated at $1,000,000 a year.”

Why, you might ask, couldn’t they just put the dye in the margarine? Well it turns out that the dairy lobby in this country had/has some serious pull. They saw margarine as competition to butter and had many laws passed that restricted the it’s appearance, primarily making it illegal to dye it to look like butter. The last state to repeal these laws was Wisconson in 1967. In Quebec, Canada it is STILL illegal to sell yellow margarine. More information on wikipedia.

Oh, and does anyone think that machine below looks at all “human-like”? 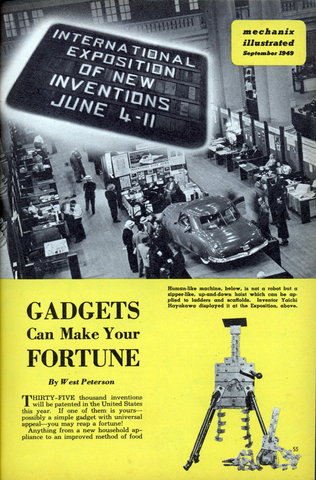 GADGETS Can Make Your FORTUNE

THIRTY-FIVE thousand inventions will be patented in the United States this year. If one of them is yoursâ€” possibly a simple gadget with universal appealâ€”you may reap a fortune!

Anything from a new household appliance to an improved method of food processing, from a unique use of plastics to another member of the wonder drug family can pay off huge dividends to the luckyâ€” and skillfulâ€”discoverer. While it’s true that many inventions are now made by research teams in well-equipped laboratories, there’s still plenty of opportunity for the scientific or gadget-minded individual.

This is a really cool looking car. 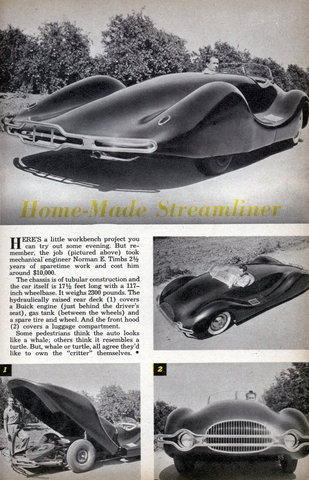 Home Made Streamliner
HERE’S a little workbench project you can try out some evening. But remember, the job (pictured above) took mechanical engineer Norman E. Timbs 2-1/2 years of sparetime work and cost him around $10,000.

The chassis is of tubular construction and the car itself is 17-1/2 feet long with a 117-inch wheelbase. It weighs 2300 pounds. The hydraulically raised rear deck (1) covers a Buick engine (just behind the driver’s seat), gas tank (between the wheels) and a spare tire and wheel. And the front hood (2) covers a luggage compartment.

Some pedestrians think the auto looks like a whale; others think it resembles a turtle. But, whale or turtle, all agree they’d like to own the “critter” themselves.

I wish I could clean my house this way… 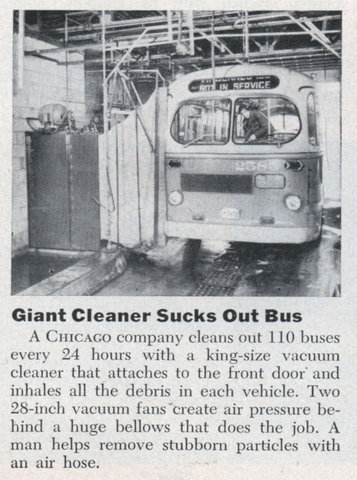 Giant Cleaner Sucks Out Bus
A Chicago company cleans out 110 buses every 24 hours with a king-size vacuum cleaner that attaches to the front door’ and inhales all the debris in each vehicle. Two 28-inch vacuum fans “create air pressure behind a huge bellows that does the job. A man helps remove stubborn particles with an air hose.

For a lot more info check out this page on the amazing New York Worlds Fair ’64 site. 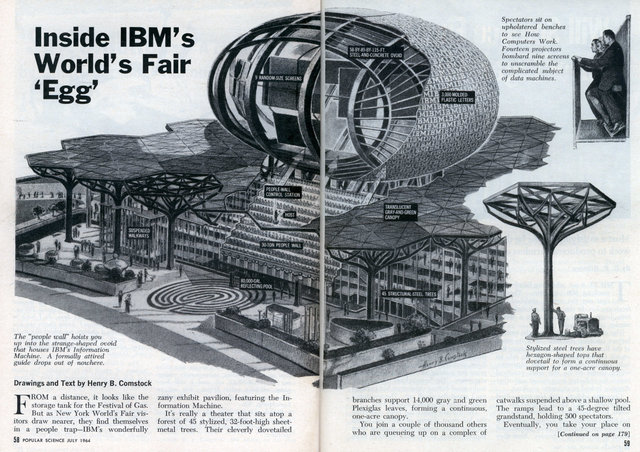 FROM a distance, it looks like the storage tank for the Festival of Gas. But as New York World’s Fair visitors draw nearer, they find themselves in a people trapâ€”IBM’s wonderfully zany exhibit pavilion, featuring the Information Machine.

You join a couple of thousand others who are queueing up on a complex of catwalks suspended above a shallow pool. The ramps lead to a 45-degree tilted grandstand, holding 500 spectators. Eventually, you take your place on what IBM calls the “people wall.” Its 12 tiers of seats are no sooner filled than an M.C. in white tie and tails comes gliding down above you in a “bucket.” He promises that in the next 12 minutes you’ll learn that computers make use of everyday methods we all use in our daily lives to solve complicated problems.