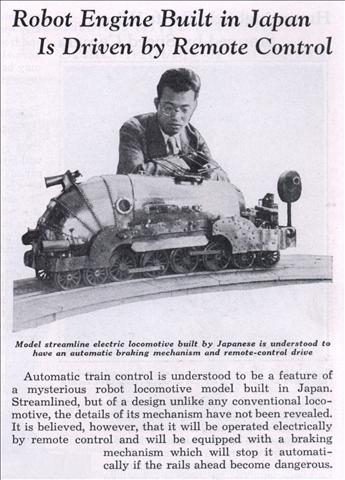 Would you say that this queer-looking contraption was a jet-propelled life raft, a plane fuselage flying without wings, or some other super-secret, odd invention just released for public view? Perhaps, if you turn the picture upside down and think of reflections on water as you reexamine it, you will be able to tell. It’s the conning tower of a German submarine sunk alongside its dock at Hamburg. Note the radar antenna. Lt. Arthur L. Schoeni, of the Navy Department, sent the photo in. 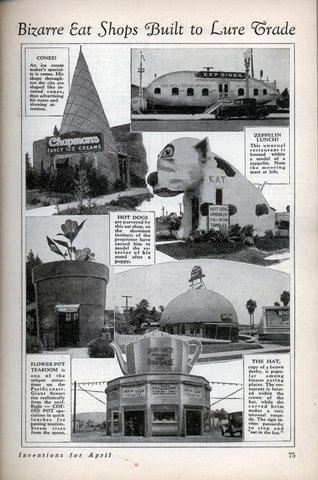 CONES!
An ice cream maker’s specialty is cones. His shops throughout the city are shaped like inverted cones, thus advertising his wares and drawing attention.

HOT DOGS are purveyed by this eat shop, so the showman instincts of the proprietor have caused him to model the exterior of his stand after a puppy.

Add an internet connection and this looks like a pretty spiffy place to live and work. 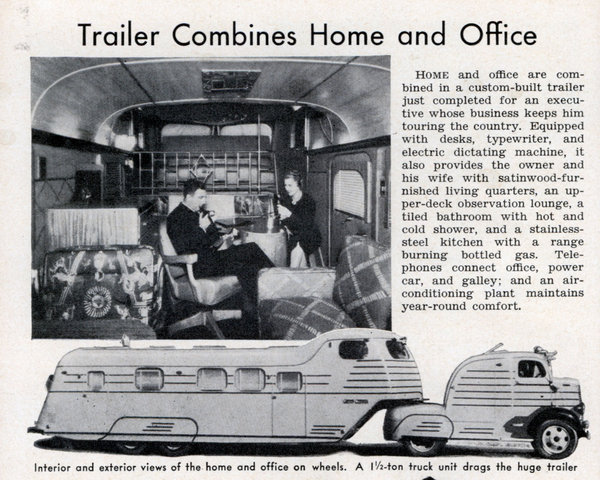 Home and office are combined in a custom-built trailer just completed for an executive whose business keeps him touring the country. Equipped with desks, typewriter, and electric dictating machine, it also provides the owner and his wife with satinwood-furnished living quarters, an upper-deck observation lounge, a tiled bathroom with hot and cold shower, and a stainless-steel kitchen with a range burning bottled gas. Telephones connect office, power car, and galley; and an air-conditioning plant maintains year-round comfort. 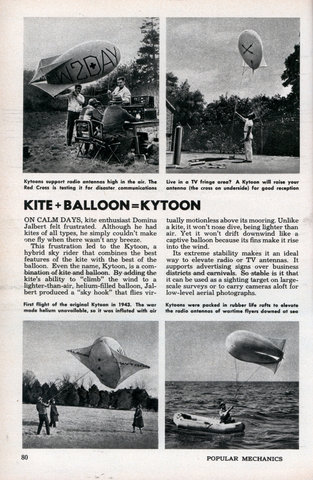 This frustration led to the Kytoon, a hybrid sky rider that combines the best features of the kite with the best of the balloon. Even the name, Kytoon, is a combination of kite and balloon. 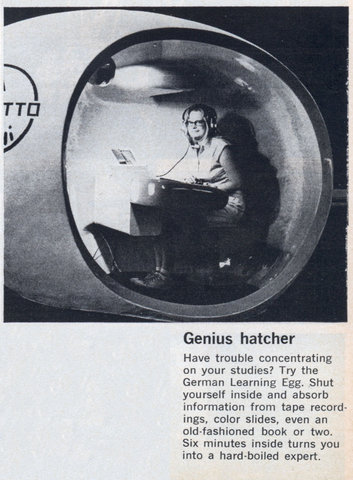 Have trouble concentrating on your studies? Try the German Learning Egg. Shut yourself inside and absorb information from tape recordings, color slides, even an old-fashioned book or two. Six minutes inside turns you into a hard-boiled expert.

Mechanix Illustrated
Issue: May, 1947
Posted in: Cool
Tags: worlds fair
6 Comments on Man of the Monsters (May, 1947) 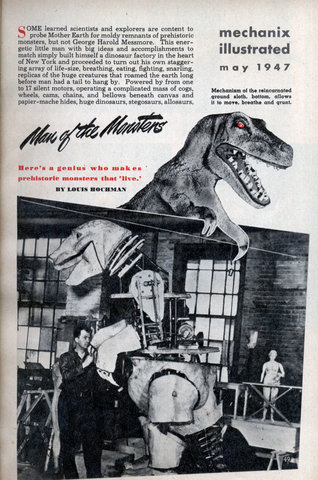 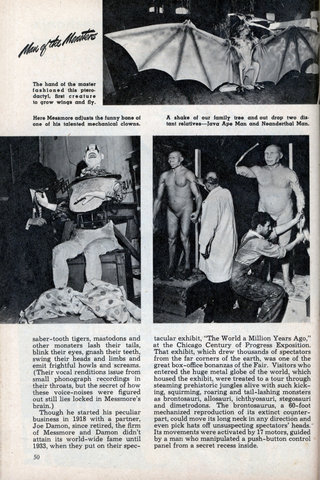 Man of the Monsters

Here’s a genius who makes prehistoric monsters that “live.”

SOME learned scientists and explorers are content to probe Mother Earth for moldy remnants of prehistoric monsters, but not George Harold Messmore. This energetic little man with big ideas and accomplishments to match simply built himself a dinosaur factory in the heart of New York and proceeded to turn out his own staggering array of life-size, breathing, eating, fighting, snarling, replicas of the huge creatures that roamed the earth long before man had a tail to hang by. Powered by from one to 17 silent motors, operating a complicated mass of cogs, wheels, cams, chains, and bellows beneath canvas and papier-mache hides, huge dinosaurs, stegosaurs, allosaurs, saber-tooth tigers, mastodons and other monsters lash their tails, blink their eyes, gnash their teeth, swing their heads and limbs and emit frightful howls and screams. (Their vocal renditions issue from small phonograph recordings in their throats, but the secret of how these voice-noises were figured out still lies locked in Messmore’s brain.) 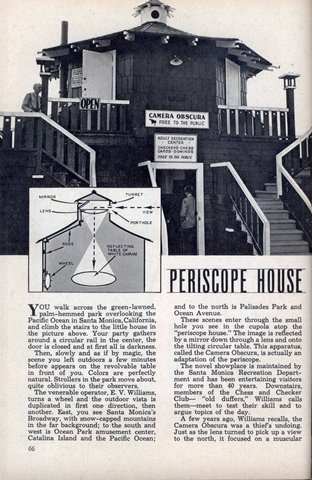 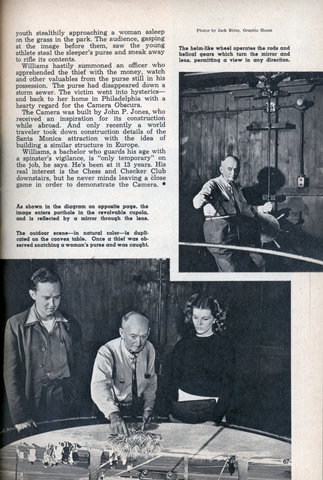 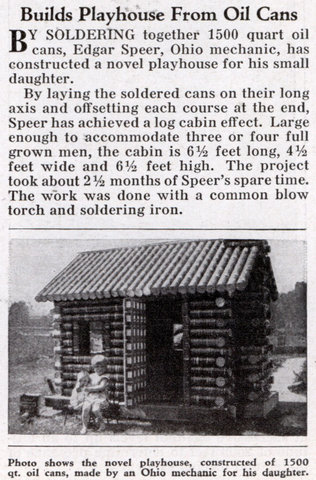 BY SOLDERING together 1500 quart oil cans, Edgar Speer, Ohio mechanic, has constructed a novel playhouse for his small daughter.

By laying the soldered cans on their long axis and offsetting each course at the end, Speer has achieved a log cabin effect. Large enough to accommodate three or four full grown men, the cabin is 6-1/2 feet long, 4-1/2 feet wide and 6-1/2 feet high. The project took about 2-1/2 months of Speer’s spare time. The work was done with a common blow torch and soldering iron. 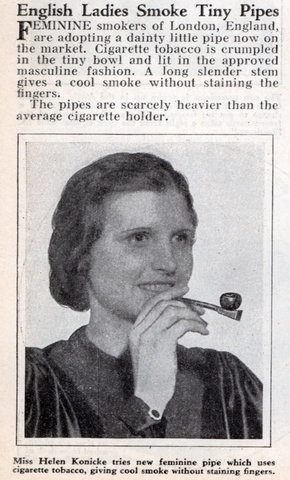 FEMININE smokers of London, England, are adopting a dainty little pipe now on the market. Cigarette tobacco is crumpled in the tiny bowl and lit in the approved masculine fashion. A long slender stem gives a cool smoke without staining the fingers.
The pipes are scarcely heavier than the average cigarette holder.