Popular Science
Issue: Feb, 1947
Posted in: Cool, How to, Trains
Tags: how its made
No Comments on Stitching Steel Into Streamliners (Feb, 1947) 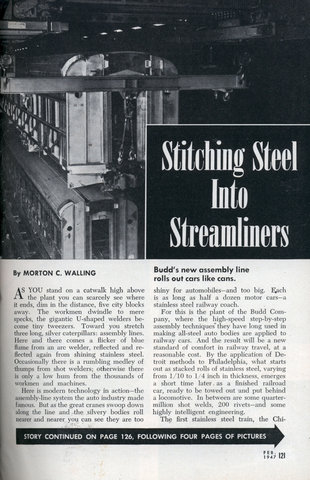 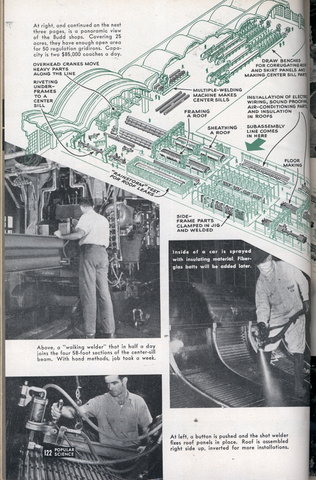 AS YOU stand on a catwalk high above the plant you can scarcely see where it ends, dim in the distance, five city blocks away. The workmen dwindle to mere specks, the gigantic U-shaped welders become tiny tweezers. Toward you stretch three long, silver caterpillars: assembly lines. Here and there comes a flicker of blue flame from an arc welder, reflected and reflected again from shining stainless steel. Occasionally there is a rumbling medley of thumps from shot welders; otherwise there is only a low hum from the thousands of workmen and machines.

Here is modern technology in actionâ€”the assembly-line system the auto industry made famous. But as the great cranes swoop down along the line and the silvery bodies roll nearer and nearer you can see they are too shiny for automobilesâ€”and too big. Each is as long as half a dozen motor carsâ€”a stainless steel railway coach. 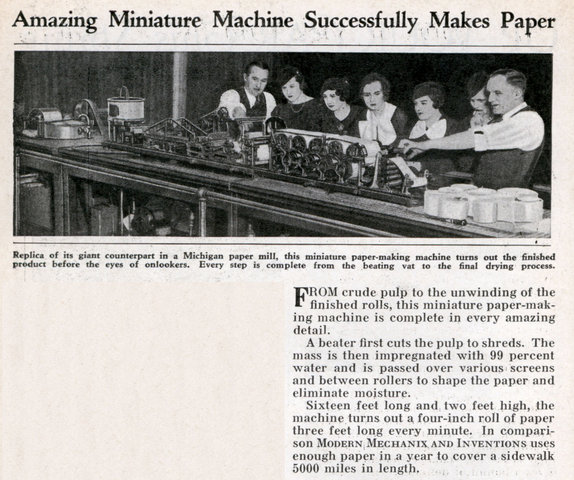 FROM crude pulp to the unwinding of the finished rolls, this miniature paper-making machine is complete in every amazing detail.

A beater first cuts the pulp to shreds. The mass is then impregnated with 99 percent water and is passed over various screens and between rollers to shape the paper and eliminate moisture.

Sixteen feet long and two feet high, the machine turns out a four-inch roll of paper three feet long every minute. In comparison Modern Mechanix and Inventions uses enough paper in a year to cover a sidewalk 5000 miles in length. 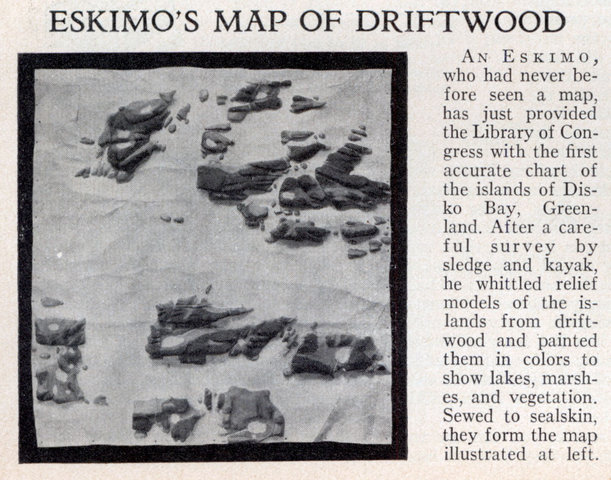 ESKIMO’S MAP OF DRIFTWOOD
An Eskimo, who had never before seen a map, has just provided the Library of Congress with the first accurate chart of the islands of Dis-ko Bay, Greenland. After a careful survey by sledge and kayak, he whittled relief models of the islands from driftwood and painted them in colors to show lakes, marshes, and vegetation. Sewed to sealskin, they form the map illustrated at left. 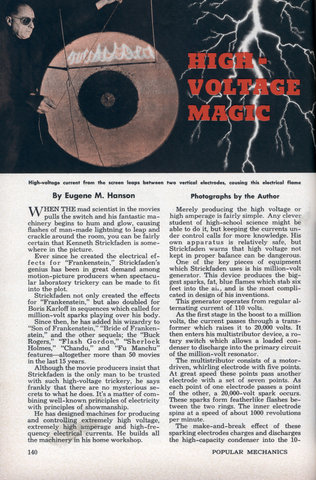 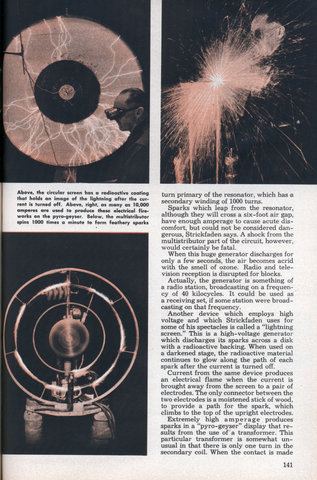 WHEN THE mad scientist in the movies pulls the switch and his fantastic machinery begins to hum and glow, causing flashes of man-made lightning to leap and crackle around the room, you can be fairly certain that Kenneth Strickfaden is somewhere in the picture.

Ever since he created the electrical effects for “Frankenstein,” Strickfaden’s genius has been in great demand among motion-picture producers when spectacular laboratory trickery can be made to fit into the plot.

Strickfaden not only created the effects for “Frankenstein,” but also doubled for Boris Karloff in sequences which called for million-volt sparks playing over his body.

Since then, he has added his wizardry to “Son of Frankenstein,” “Bride of Frankenstein,” and the other sequels; the “Buck Rogers,” “Flash Gordon,” “Sherlock Holmes,” “Chandu,” and “Fu Manchu” featuresâ€”altogether more than 50 movies in the last 15 years. 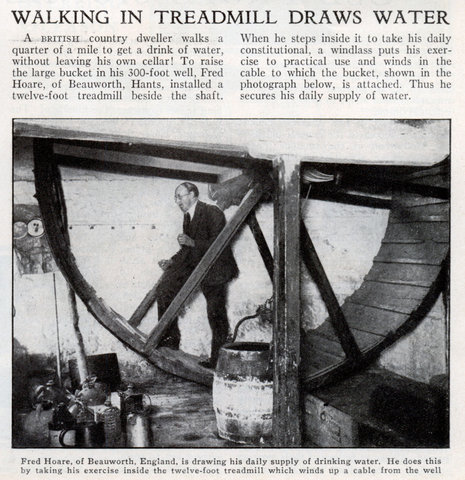 A British country dweller walks a quarter of a mile to get a drink of water, without leaving his own cellar! To raise the large bucket in his 300-foot well, Fred Hoare, of Beauworth, Hants, installed a twelve-foot treadmill beside the shaft.

When he steps inside it to take his daily constitutional, a windlass puts his exercise to practical use and winds in the cable to which the bucket, shown in the photograph below, is attached. Thus he secures his daily supply of water.

This article is huge (50 pages) so I’ve broken it up into three parts.
Part One
Part Two 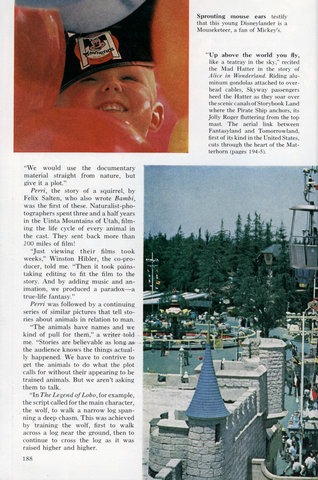 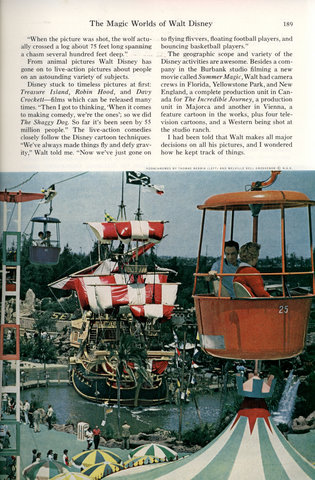 This article is huge (50 pages) so I’ve broken it up into three parts.
Part One
Part Three 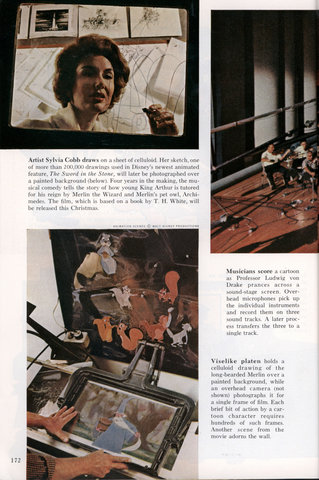 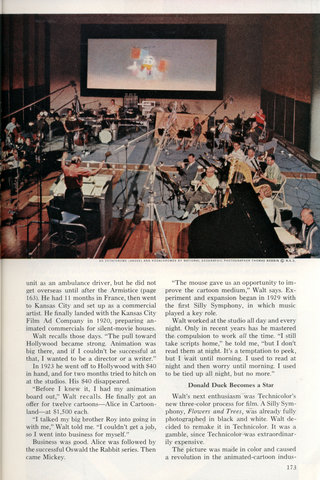 This article is huge (50 pages) so I’ve broken it up into three parts.
Part Two
Part Three 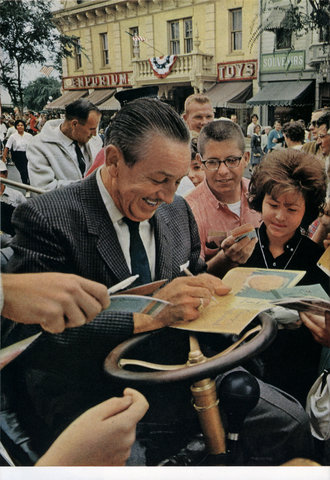 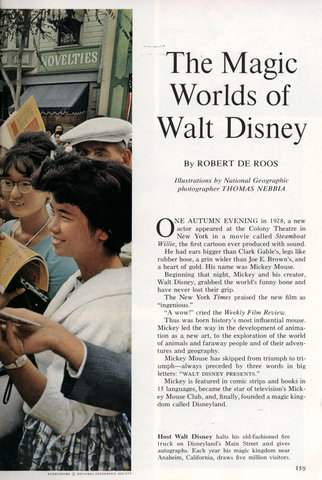 The Magic Worlds of Walt Disney

ONE AUTUMN EVENING in 1928, a new actor appeared at the Colony Theatre in New York in a movie called Steamboat Willie, the first cartoon ever produced with sound. He had ears bigger than Clark Gable’s, legs like rubber hose, a grin wider than Joe E. Brown’s, and a heart of gold. His name was Mickey Mouse.

Beginning that night, Mickey and his creator, Walt Disney, grabbed the world’s funny bone and have never lost their grip.

The New York Times praised the new film as “ingenious.”

Thus was born history’s most influential mouse. Mickey led the way in the development of anima-tion as a new art, to the exploration of the world of animals and faraway people and of their adventures and geography. 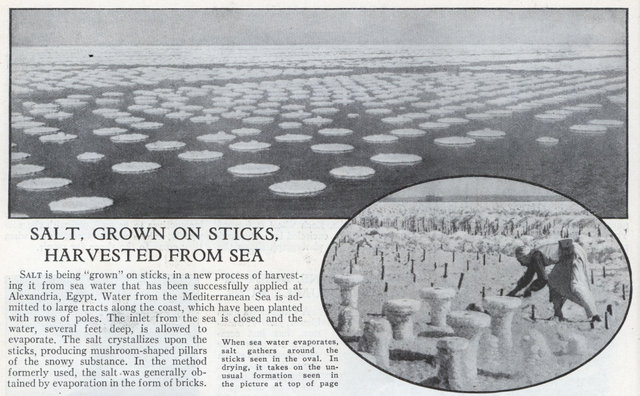 SALT, GROWN ON STICKS, HARVESTED FROM SEA
Salt is being “grown” on sticks, in a new process of harvesting it from sea water that has been successfully applied at Alexandria, Egypt. Water from the Mediterranean Sea is admitted to large tracts along the coast, which have been planted with rows of poles. The inlet from the sea is closed and the water, several feet deep, is allowed to evaporate. The salt crystallizes upon the sticks, producing mushroom-shaped pillars of the snowy substance. In the method formerly used, the salt was generally obtained by evaporation in the form of bricks. 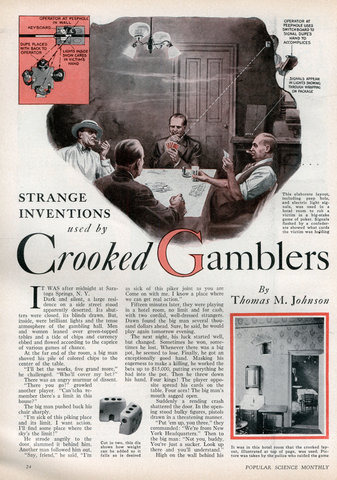 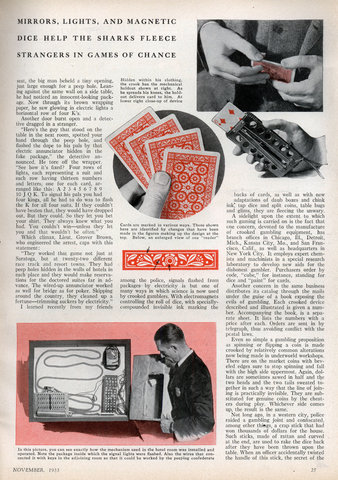 IT WAS after midnight at Saratoga Springs, N. Y. Dark and silent, a large residence on a side street stood apparently deserted. Its shutters were closed, its blinds drawn. But, inside, were brilliant lights and the tense atmosphere of the gambling hall. Men and women leaned over green-topped tables and a tide of chips and currency ebbed and flowed according to the caprice of various games of chance.

At the far end of the room, a big man shoved his pile of colored chips to the center of the table.

There was an angry murmur of dissent.