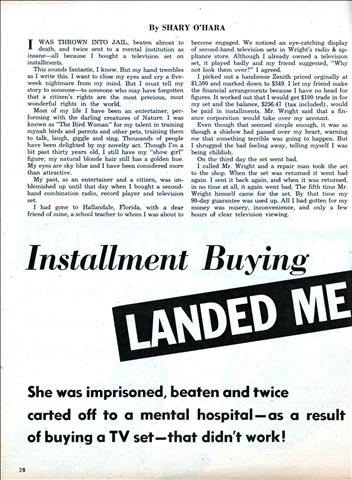 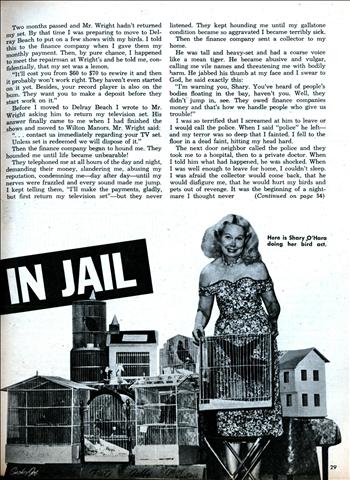 Installment Buying Landed Me In Jail

She was imprisoned, beaten and twice carted off to a mental hospital—as a result of buying a TV set—that didn’t work!

I WAS THROWN INTO JAIL, beaten almost to death, and twice sent to a mental institution as insane—all because I bought a television set on installments.

This sounds fantastic, I know. But my hand trembles as I write this. I want to close my eyes and cry a five-week nightmare from my mind. But I must tell my story to someone—to someone who may have forgotten that a citizen’s rights are the most precious, most wonderful rights in the world. 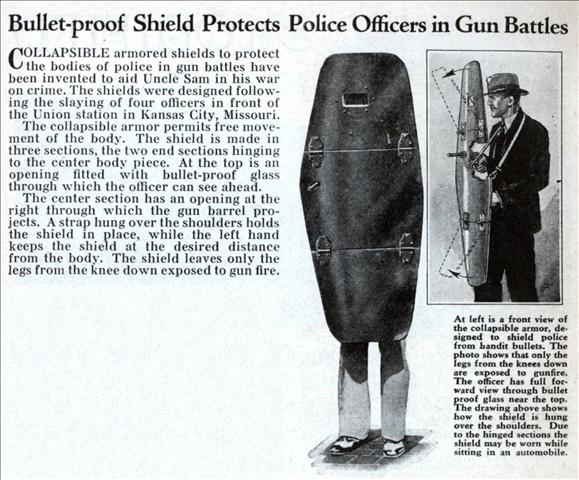 COLLAPSIBLE armored shields to protect the bodies of police in gun battles have been invented to aid Uncle Sam in his war on crime. The shields were designed following the slaying of four officers in front of the Union station in Kansas City, Missouri.

The collapsible armor permits free movement of the body. The shield is made in three sections, the two end sections hinging to the center body piece. At the top is an opening fitted with bullet-proof glass through which the officer can see ahead.

Gas Replaces The Noose
FOLLOWING the lead set by Nevada, Arizona and Colorado in the quick and painless method of executing criminals by gas, Wyoming has installed a lethal gas chamber to replace the noose, a now fast disappearing method of capital punishment. The Wyoming death chamber, manufactured by a Denver, Colorado, firm, is claimed to be the most humane yet devised. Several other states are said to be considering the adoption of gas chambers for legal executions. 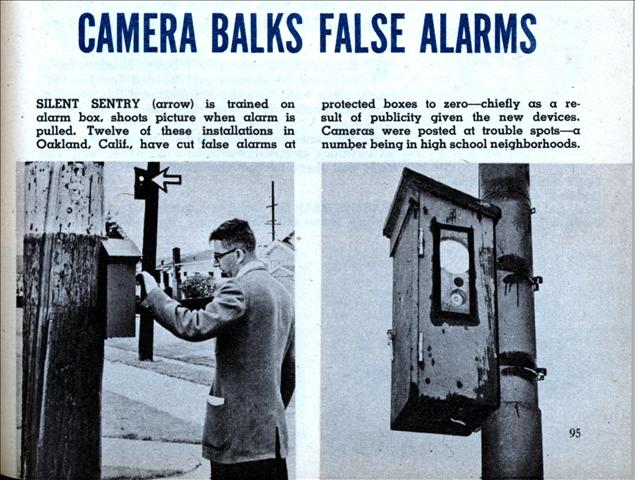 SILENT SENTRY is trained on alarm box, shoots picture when alarm is pulled. Twelve of these installations in Oakland, Calif., have cut false alarms at protected boxes to zero—chiefly as a result of publicity given the new devices. Cameras were posted at trouble spots—a number being in high school neighborhoods.

They really didn’t think these things out too well, did they? 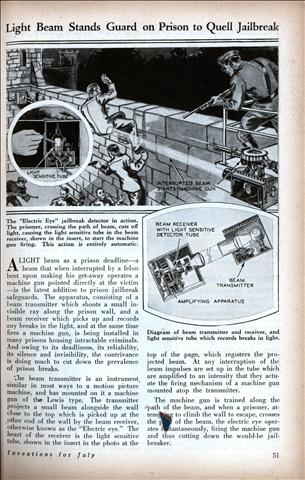 A LIGHT beam as a prison deadline—a beam that when interrupted by a felon bent upon making his get-away operates a machine gun pointed directly at the victim —is the latest addition to prison jailbreak safeguards. The apparatus, consisting of a beam transmitter which shoots a small invisible ray along the prison wall, and a beam receiver which picks up and records any breaks in the light, and at the same time fires a machine gun, is being installed in many prisons housing intractable criminals. 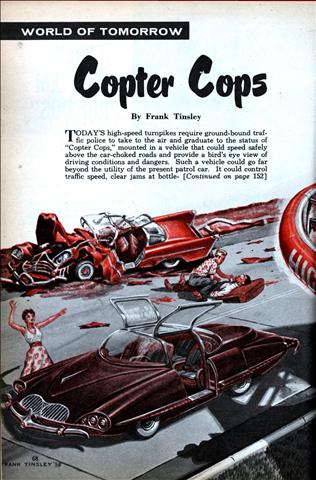 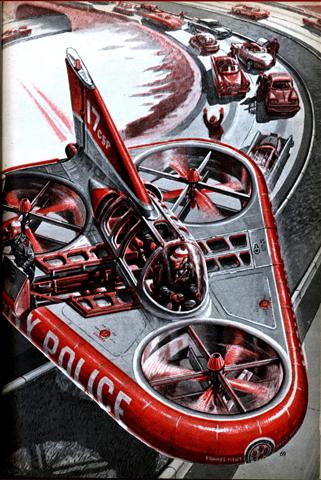 TODAY’S high-speed turnpikes require ground-bound traffic police to take to the air and graduate to the status of “Copter Cops,” mounted in a vehicle that could speed safely above the car-choked roads and provide a bird’s eye view of driving conditions and dangers. Such a vehicle could go far beyond the utility of the present patrol car. It could control traffic speed, clear jams at bottle- necks, perform emergency rescue work and provide fast aerial ambulance service, plus offering a more efficient pursuit of criminals. 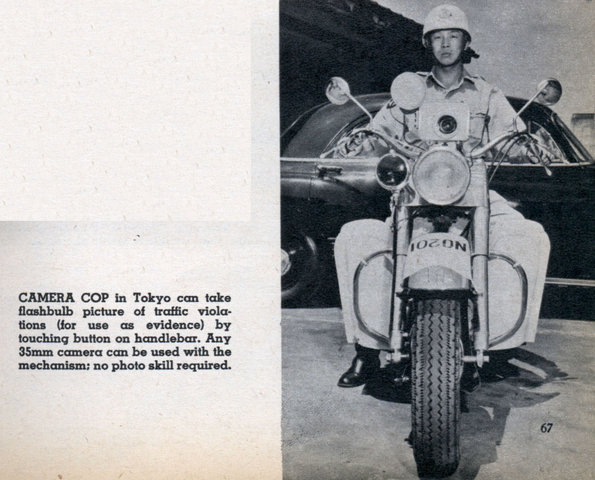 CAMERA COP In Tokyo can take flashbulb picture of traffic violations (for use as evidence) by touching button on handlebar. Any 35mm camera can be used with the mechanism; no photo skill required. 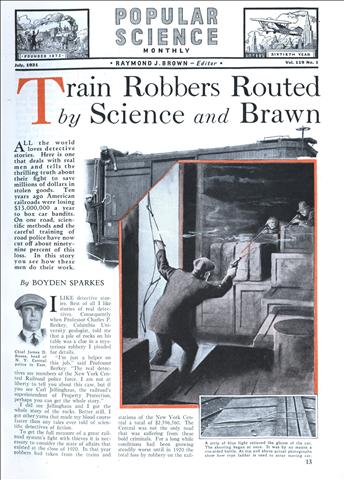 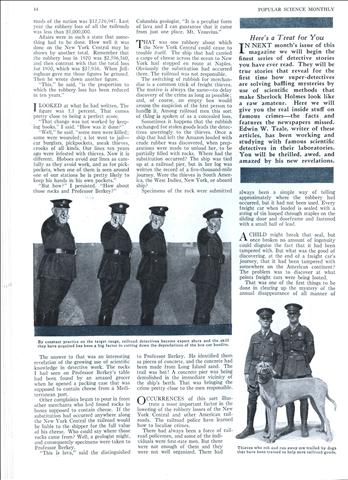 ALL the world . loves detective stories. Here is one that deals with real men and tells the thrilling truth about their fight to save millions of dollars in stolen goods. Ten years ago American railroads were losing $13,000,000 a year to box car bandits. On one road, scientific methods and the careful training of road police have now cut off about ninety-nine percent of this loss. In this story you see how these men do their work.

I LIKE detective stories. Best of all I like stories of real detectives. Consequently when Professor Charles P. Berkey, Columbia University geologist, told me that a pile of rocks on his table was a clue in a mysterious robbery I pleaded for details.

“I’m just a helper on this job,” said Professor Berkey. “The real detectives are members of the New York Central Railroad police force. I am not at liberty to tell you about this case, but if you see Carl Jellinghaus, the railroad’s superintendent of Property Protection, perhaps you can get the whole story.” 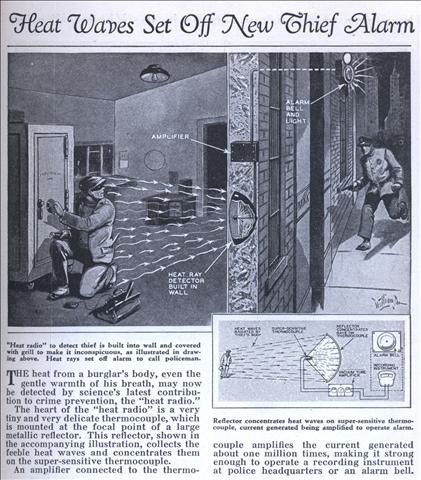 Heat Waves Set Off New Thief Alarm
THE heat from a burglar’s body, even the gentle warmth of his breath, may now be detected by science’s latest contribution to crime prevention, the “heat radio.”

The heart of the “heat radio” is a very tiny and very delicate thermocouple, which is mounted at the focal point of a large metallic reflector. This reflector, shown in the accompanying illustration, collects the feeble heat waves and concentrates them on the super-sensitive thermocouple. 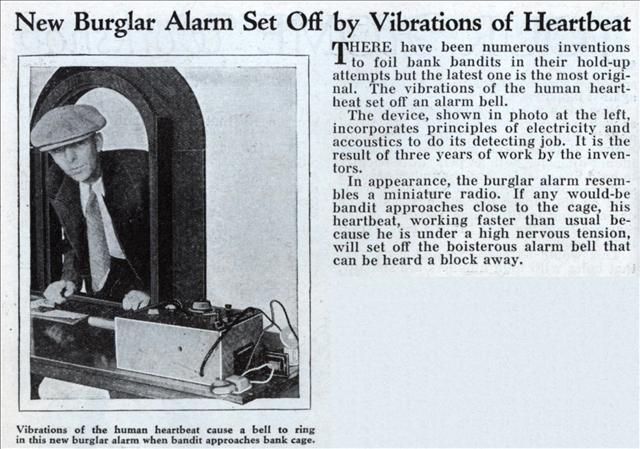