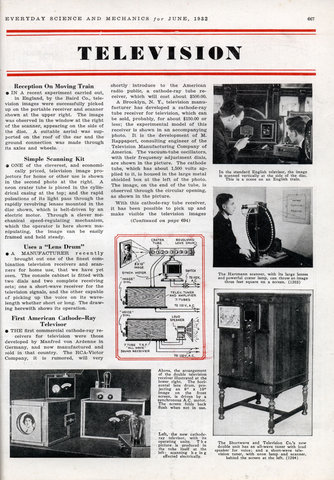 Reception On Moving Train
IN A recent experiment carried out, in England, by the Baird Co., television images were successfully picked up on the portable receiver and scanner shown at the upper right. The image was observed in the window at the right of the scanner, appearing on the side of the disc. A suitable aerial was supported on the roof of the car and the ground connection was made through its axles and wheels.

Science And Mechanics
Issue: Nov, 1931
Posted in: Ahead of its time, Origins, Television
4 Comments on Tour of a Very Early TV Station (Nov, 1931)

Operating a TV station using electro-mechanical equipment looks really hard. That camera looking thingy at the bottom of the page is not in fact a camera, but an arc lamp. In front of the lamp is a spinning disc with holes punched in it which scans the light across the subject. The “camera” is actually composed of those six light-bulb looking things in front of the subject. They are just ordinary photo-electric cells.

And to view it at home? Here’s what you need:

“you will require a 60-hole scanning disc, revolving at 1200 revolutions a minute, giving 20 frames a second. Further, you will need two short-wave receivers, if you desire to pick up both image and voice frequencies. The images are transmitted on 107 meters, and the sound is sent out from W2XE’s shortwave transmitter on 49 meters.” 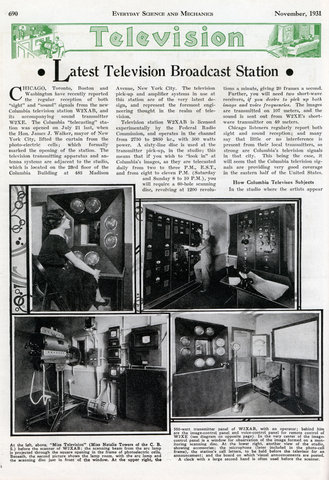 CHICAGO, Toronto, Boston and Washington have recently reported the regular reception of both “sight” and “sound” signals from the new Columbia television station W2XAB, and its accompanying sound transmitter W2XE. The Columbia “telecasting” station was opened on July 21 last, when the Hon. James J. Walker, mayor of New York City, lifted the curtain from the photo-electric cells; which formally marked the opening of the station. The television transmitting apparatus and antenna systems are adjacent to the studio, which is located on the 23rd floor of the Columbia Building at 485 Madison 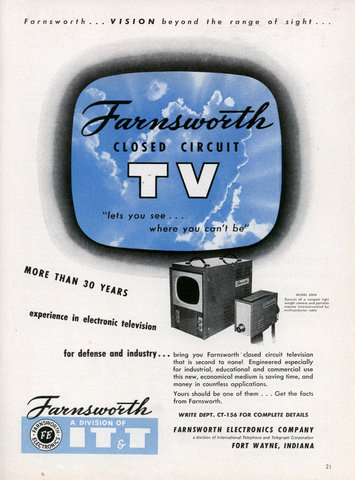 Farnsworth … VISION beyond the range of sight…

MORE THAN 30 YEARS experience in electronic television for defense and industry . . . bring you Farnsworth closed circuit television that is second to none! Engineered especially for industrial, educational and commercial use this new, economical medium is saving time, and money in countless applications.

Yours should be one of them . . . Get the facts from Farnsworth.
WRITE DEPT. CT-156 FOR COMPLETE DETAILS
FARNSWORTH ELECTRONICS COMPANY
FORT WAYNE, INDIANA
a division of International Telephone and Telegraph Corporation

Gee, adoption of a new technology in America held back by patent protectionism? Never! 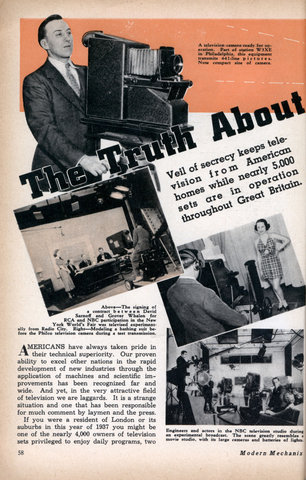 THE TRUTH ABOUT TELEVISION

Veil of secrecy keeps television from American homes while nearly 5,000 sets are in operation throughout Great Britain.

AMERICANS have always taken pride in their technical superiority. Our proven ability to excel other nations in the rapid development of new industries through the application of machines and scientific improvements has been recognized far and wide. And yet, in the very attractive field of television we are laggards. It is a strange situation and one that has been responsible for much comment by laymen and the press.

Scientific American
Issue: May, 1953
Posted in: Advertisements, Television
1 Comment on Is Your TV Set Ready for the new UHF Channels ? (May, 1953) 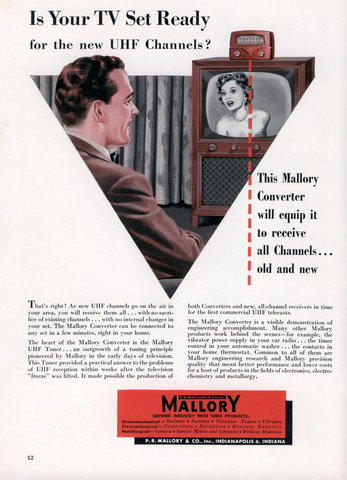 Is Your TV Set Ready for the new UHF Channels ?
This Mallory Converter will equip it to receive all Channels… old and new

That’s right! As new UHF channels go on the air in your area, you will receive them all . . . with no sacrifice of existing channels . . . with no internal changes in your set. The Mallory Converter can be connected to any set in a few minutes, right in your home. 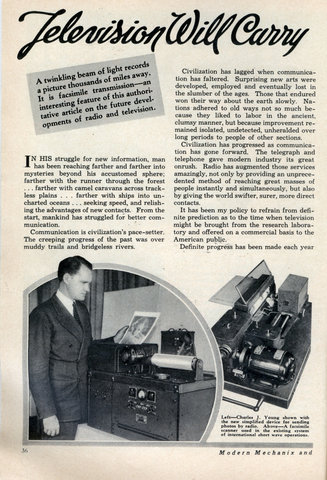 Television Will Carry the Mails

A twinkling beam of light records a picture thousands of miles away. It is facsimile transmission- an interesting feature of this authoritative article on the future developments of radio and television.

IN HIS struggle for new information, man has been reaching farther and farther into mysteries beyond his accustomed sphere; farther with the runner through the forest . . . farther with camel caravans across trackless plains . . . farther with ships into uncharted oceans . . . seeking speed, and relishing the advantages of new contacts. From the start, mankind has struggled for better communication.

Popular Science
Issue: Feb, 1948
Posted in: Sign of the Times, Television
No Comments on Juke Box Gets New Look (Feb, 1948) 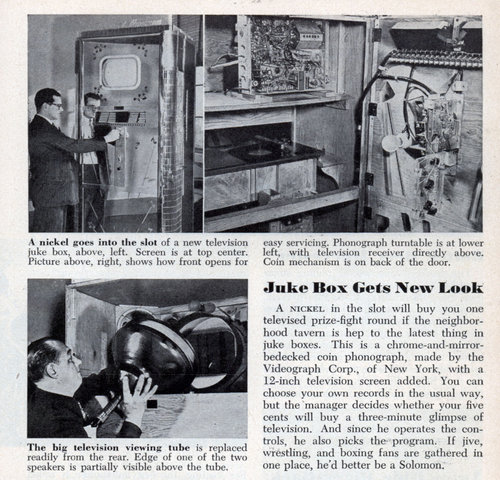 A nickel in the slot will buy you one televised prize-fight round if the neighborhood tavern is hep to the latest thing in juke boxes. This is a chrome-and-mirror-bedecked coin phonograph, made by the Videograph Corp., of New York, with a 12-inch television screen added. You can choose your own records in the usual way, but the manager decides whether your five cents will buy a three-minute glimpse of television. And since he operates the controls, he also picks the program. If jive, wrestling, and boxing fans are gathered in one place, he’d better be a Solomon. 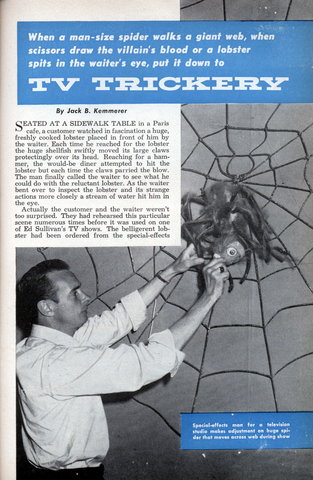 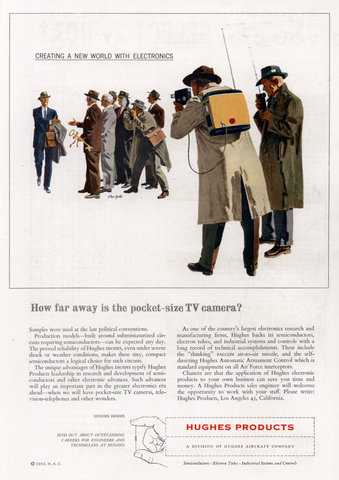 CREATING A NEW WORLD WITH ELECTRONICS
How far away is the pocket-size TV camera?
Samples were used at the last political conventions.
Production modelsâ€”built around subminiaturized circuits requiring semiconductorsâ€”can be expected any day. The proved reliability of Hughes diodes, even under severe shock or weather conditions, makes these tiny, compact semiconductors a logical choice for such circuits.

What does now taste like? Sweeter or more bitter than then?
What sound does purple make?
What does 12 smell like?

At Bell Labs, we’re working on all these questions and more!
Bell Labs, for all your existential research needs.

Also, I love the fact that they didn’t spring for a color ad. 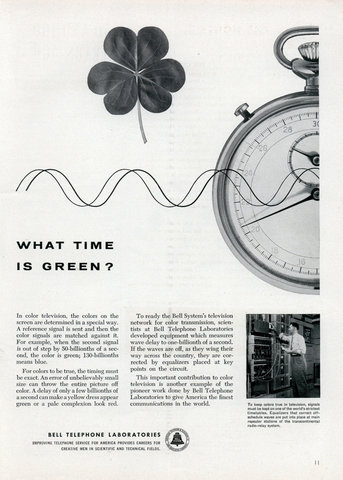 WHAT TIME IS GREEN?
In color television, the colors on the screen are determined in a special way. A reference signal is sent and then the color signals are matched against it. For example, when the second signal is out of step by 50-billionths of a second, the color is green; 130-billionths means blue.