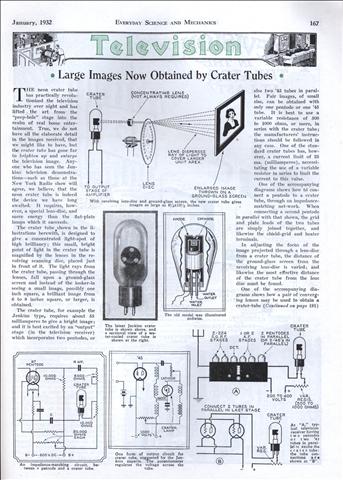 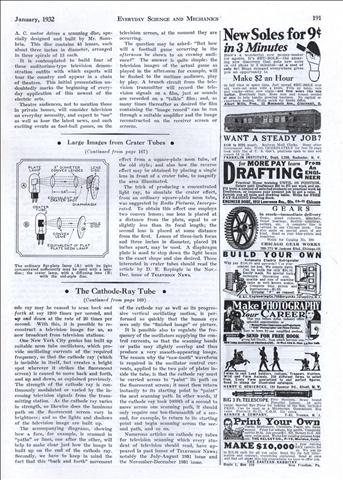 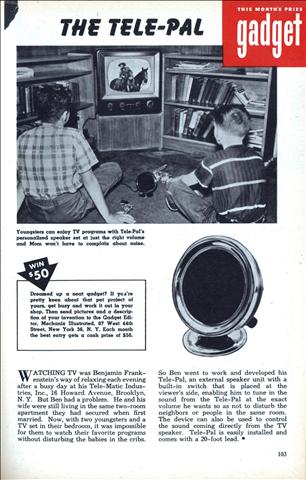 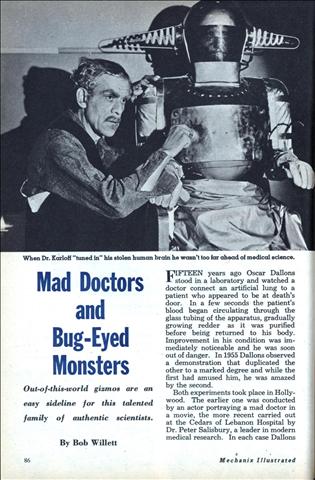 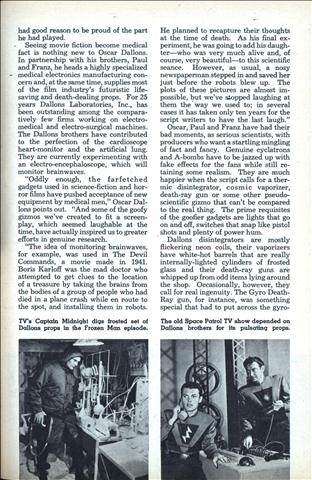 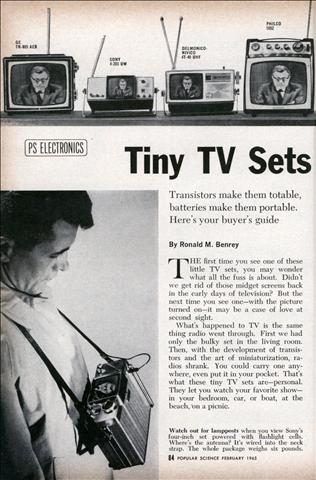 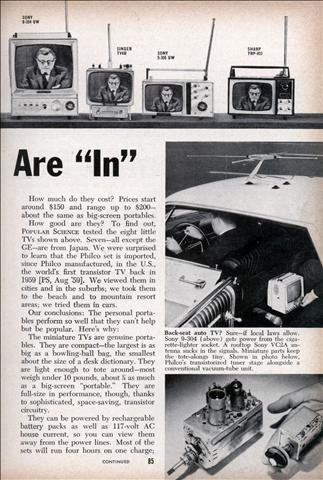 Mechanix Illustrated
Issue: May, 1950
Posted in: Kitchen, Television
Tags: combos, housewife aids
2 Comments on NEW for the HOME (May, 1950) 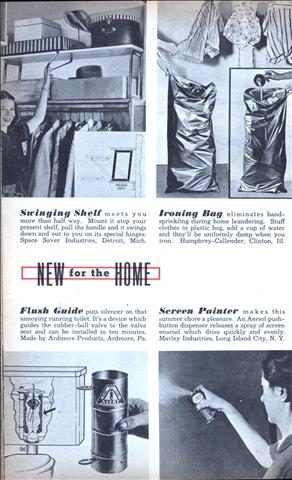 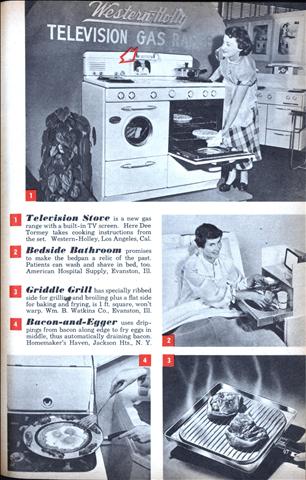 Swinging Shelf meets you more than half way. Mount it atop your present shelf, pull the handle and it swings down and out to you on its special hinges. Space Saver Industries, Detroit, Mich.

Flush Guide puts silencer on that annoying running toilet. It’s a device which guides the rubber-ball valve to the valve seat and can be installed in ten minutes. Made by Ardmore Products, Ardmore, Pa. 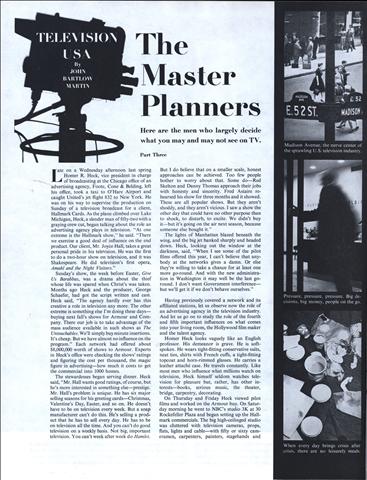 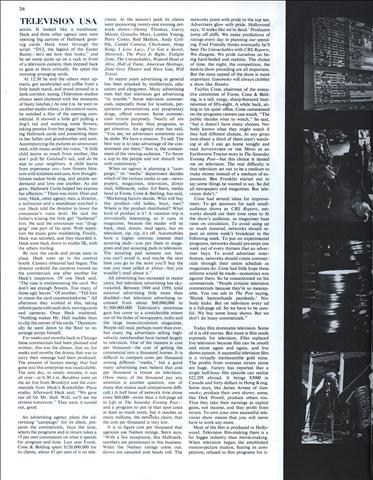 Here are the men who largely decide what you may and may not see on TV.

Late on a Wednesday afternoon last spring Homer R. Heck, vice president in charge of broadcasting at the Chicago office of an advertising agency, Foote, Cone & Belding, left his office, took a taxi to O’Hare Airport and caught United’s jet flight 832 to New York. He was on his way to supervise the production on Sunday of a television broadcast for a client, Hallmark Cards. As the plane climbed over Lake Michigan, Heck, a slender man of fifty-two with a graying crew cut, began talking about the role an advertising agency plays in television. “At one extreme is the Hallmark show,” he said. “There we exercise a good deal of influence on the end product. Our client, Mr. Joyce Hall, takes a great personal pride in his television. He was the first to do a two-hour show on television, and it was Shakespeare. He did television’s first opera, Amahl and the Night Visitors.” 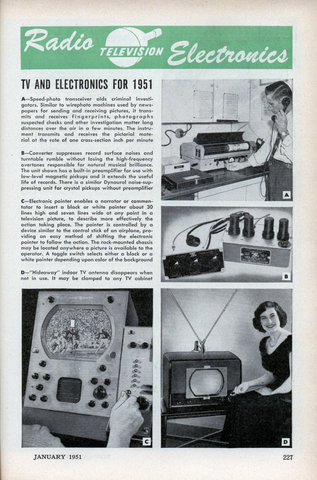 TV AND ELECTRONICS FOR 1951

A—Speed-photo transceiver aids criminal investigators. Similar to wirephoto machines used by newspapers for sending and receiving pictures, it transmits and receives fingerprints, photographs suspected checks and other investigation matter long distances over the air in a few minutes. The instrument transmits and receives the pictorial material at the rate of one cross-section inch per minute 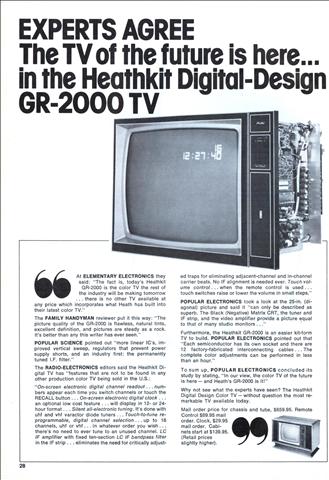 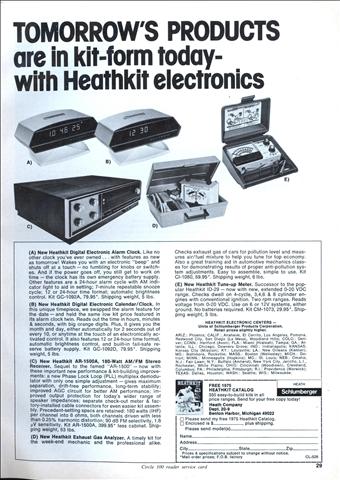 At ELEMENTARY ELECTRONICS they said: “The fact is, today’s Heathkit GR-2000 is the color TV the rest of the industry will be making tomorrow .. . there is no Other TV available at any price which incorporates what Heath has built into their latest color TV.”

The FAMILY HANDYMAN reviewer put it this way: “The picture quality of the GR-2000 is flawless, natural tints, excellent definition, and pictures are steady as a rock. It’s better than any this writer has ever seen.”

I’m pretty sure that Microtherm thing is an external microwave. This is probably not the best medical tool.

NOW-GET ALL 3 with Futurized Raytheon TV

Enjoy fine reception of razor-sharp pictures by turning only one dial. Raytheon uses all the tubes and power needed for wonderful, clear-focus pictures —no “short cuts”, no dim, fuzzy pictures! 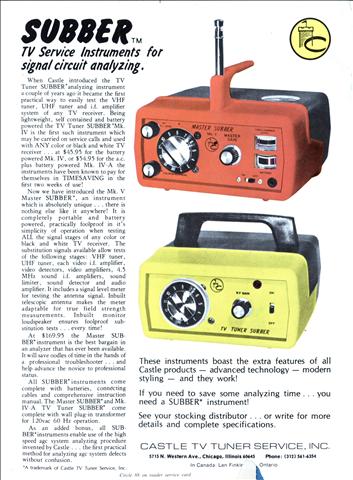 When Castle introduced the TV Tuner SUBBER analyzing instrument a couple of years ago it became the first practical way to easily test the VHF tuner, UHF tuner and i.f. amplifier system of any TV receiver. Being lightweight, self contained and battery powered the TV Tuner SUBBER *Mk. IV is the first such instrument which may be carried on service calls and used with ANY color or black and white TV receiver … at $45.95 for the battery powered Mk. IV, or $54.95 for the a.c. plus battery powered Mk. IV-A the instruments have been known to pay for themselves in TIMESAVING in the first two weeks of use!