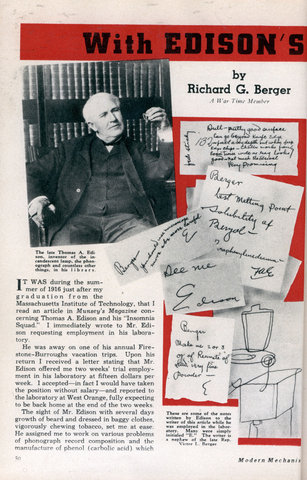 IT WAS during the summer of 1916 just after my graduation from the Massachusetts Institute of Technology, that I read an article in Munsey’s Magazine concerning Thomas A. Edison and his “Insomnia Squad.” I immediately wrote to Mr. Edison requesting employment in his laboratory.

He was away on one of his annual Firestone-Burroughs vacation trips. Upon his return I received a letter stating that Mr. Edison offered me two weeks’ trial employment in his laboratory at fifteen dollars per week. I acceptedâ€”in fact I would have taken the position without salaryâ€”and reported to the laboratory at West Orange, fully expecting to be back home at the end of the two weeks.

The sight of Mr. Edison with several days growth of beard and dressed in baggy clothes, vigorously chewing tobacco, set me at ease. He assigned me to work on various problems of phonograph record composition and the manufacture of phenol (carbolic acid) which was then much in demand for both records and explosives. 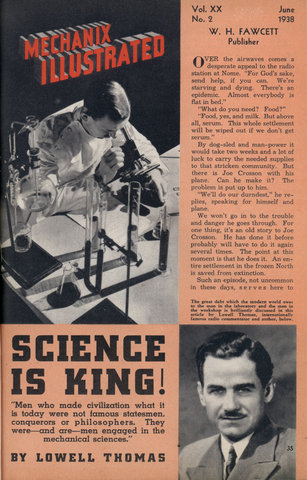 SCIENCE IS KING
“Men who made civilization what it is today were not famous statesmen, conquerors or philosophers. They wereâ€”and areâ€”men engaged in the mechanical sciences”

OVER the airwaves comes a desperate appeal to the radio station at Nome. “For God’s sake, send help, if you can. We’re starving and dying. There’s an epidemic. Almost everybody is flat in bed.”

“Food, yes, and milk. But above all, serum. This whole settlement will be wiped out if we don’t get serum.”

By dog-sled and man-power it would take two weeks and a lot of luck to carry the needed supplies to that stricken community. But there is Joe Crosson with his plane. Can he make it? The problem is put up to him.

“We’ll do our durndest,” he replies, speaking for himself and plane.

We won’t go in to the trouble and danger he goes through. For one thing, it’s an old story to Joe Crosson. He has done it before probably will have to do it again several times. The point at this moment is that he does it. An entire settlement in the frozen North is saved from extinction. 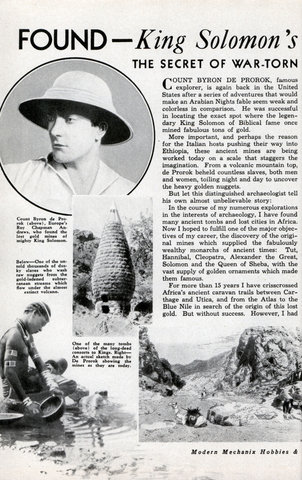 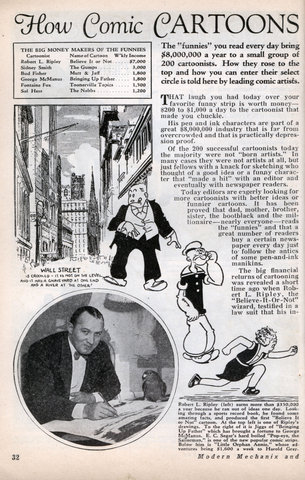 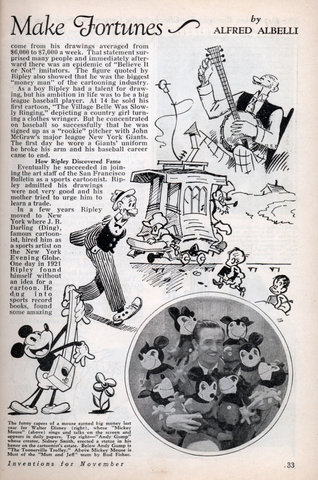 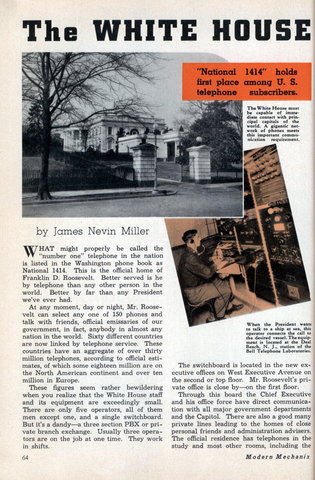 Popular Science
Issue: Nov, 1960
Posted in: Ahead of its time, History, Science
5 Comments on There’s plenty of room at the bottom (Nov, 1960)

This is a condensed version of a talk titled “There’s plenty of room at the bottom” that Richard Feynman gave in 1959. It is generally considered to be the first speech about nanotechnology. 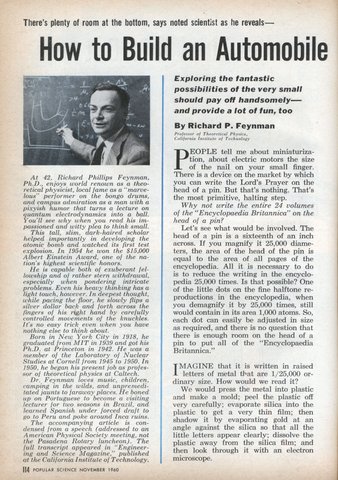 There’s plenty of room at the bottom, says noted scientist as he reveals â€”
How to Build an Automobile Smaller than this dot -> .

At 42, Richard Phillips Feynman, Ph.D., enjoys world renown as a theoretical physicist, local fame as a “marvelous” performer on the bongo drums, and campus admiration as a man with a pixyish humor that turns a lecture on quantum electrodynamics into a ball. You’ll see why when you read his impassioned and witty plea to think small.

This tall, slim, dark-haired scholar helped importantly in developing the atomic bomb and watched its first test explosion. In 1954 he won the $15,000 Albert Einstein Award, one of the nation’s highest scientific honors.

This article is the last in Scientific American series on Automatic Control. It covers Information theory and processing. It has some great tidbits such as primitive tagging system for books by Vanevar Bush that used binary coded descriptors on microfilm. Also I’d have to say the author deserves to gloat over this quote: “It is almost certain that “bit” will become common parlance in the field of information, as “horsepower” is in the motor field.” 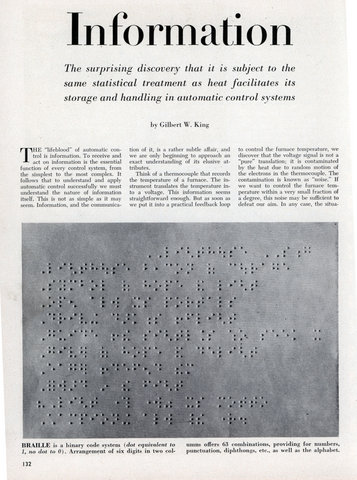 THE “lifeblood” of automatic control is information. To receive and act on information is the essential function of every control system, from the simplest to the most complex. It follows that to understand and apply automatic control successfully we must understand the nature of information itself. This is not as simple as it may seem. Information, and the communication of it, is a rather subtle affair, and we are only beginning to approach an exact understanding of its elusive attributes.

Very interesting article about the industrial designer Egemont Arens, who designed some of the classic consumer goods of the last century (some, like the Kitchen Aid stand mixer, are still available), and his philosophy of design, which sounds remarkably modern. 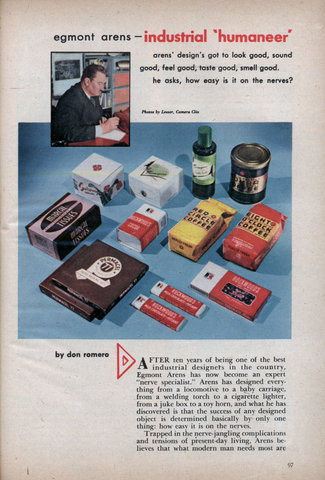 arens’ design’s got to look good, sound good, feel good, taste good, smell good, he asks, how easy is it on the nerves?

AFTER ten years of being one of the best industrial designers in the country, Egmont Arens has now become an expert “nerve specialist.” Arens has designed everything from a locomotive to a baby carriage, from a welding torch to a cigarette lighter, from a juke box to a toy horn, and what he has discovered is that the success of any designed object is determined basically by only one thing: how easy it is on the nerves.

Trapped in the nerve-jangling complications and tensions of present-day living, Arens believes that what modern man needs most are simplicity and relaxation in his surroundings. Instead of designing solely for “sales appeal”, or “esthetic presentation” therefore, Arens concentrates on designing an object to the “specifications” of the human system. He calls it “industrial humaneering.” Arens “humaneers” an object by giving it a color and contour which are relaxing to the eye, by giving it a texture and shape which are pleasing to the touch and inviting to the grasp, by muffling any noises which may jar on the ear, by eliminating any odors which may offend the nose, and lastlyâ€”if the object is, say, a reed musical instrument or a toothbrushâ€”by making sure it is compounded of materials which figuratively, as well as literally, will leave the user with a pleasant taste in his mouth. After making it easy on the nerves, Arens completes his humaneering of the object by making it easy on the muscles. In designing, say, a household-cleaning appliance, he will use every trick in the book to insure that in lifting, carrying, cleaning, operating and storing the appliance, the user will be required to do just as little bending, stooping, squatting, reaching, and wrenching as possible. 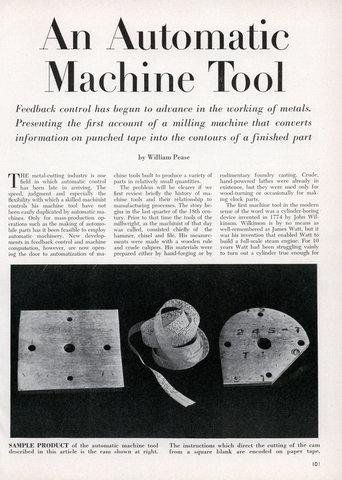 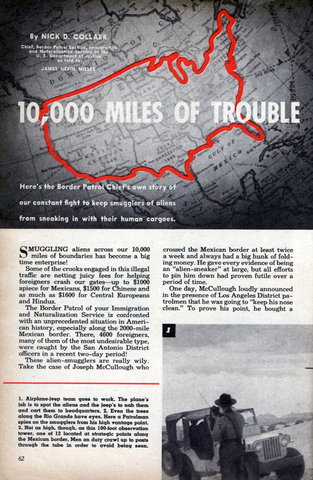