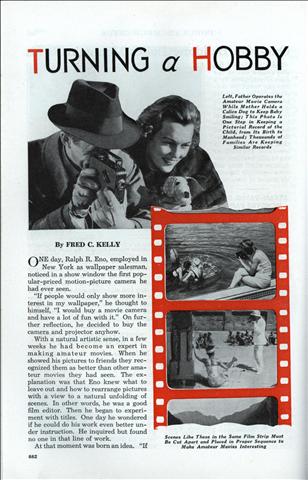 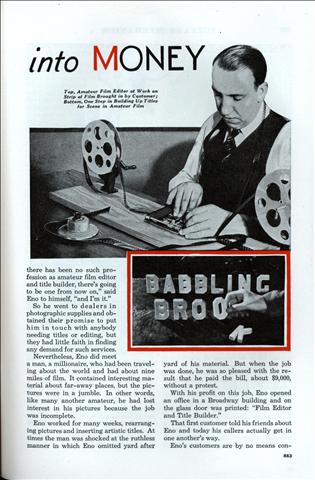 TURNING a HOBBY into MONEY

ONE day, Ralph R. Eno, employed in New York as wallpaper salesman, noticed in a show window the first popular-priced motion-picture camera he had ever seen.

“If people would only show more interest in my wallpaper,” he thought to himself, “I would buy a movie camera and have a lot of fun with it.” On further reflection, he decided to buy the camera and projector anyhow.

Modern Mechanix
Issue: Sep, 1930
Posted in: How to
No Comments on Mechanical Aids Help the Stage Illusionist (Sep, 1930) 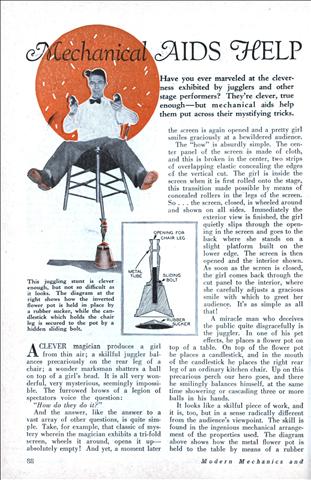 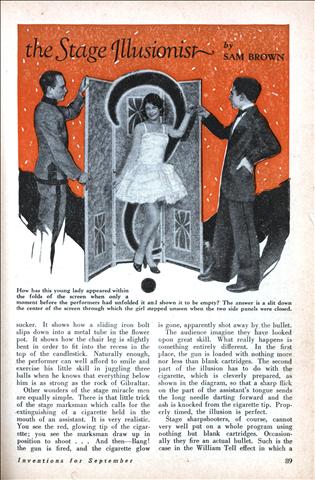 Have you ever marveled at the cleverness exhibited by jugglers and other stage performers? They’re clever, true enoughâ€”but mechanical aids help them put across their mystifying tricks.

A CLEVER magician produces a girl from thin air; a skillful juggler balances precariously on the rear leg of a chair; a wonder marksman shatters a ball on top of a girl’s head. It is all very wonderful, very mysterious, seemingly impossible. The furrowed brows of a legion of spectators voice the question: “How do they do it?” 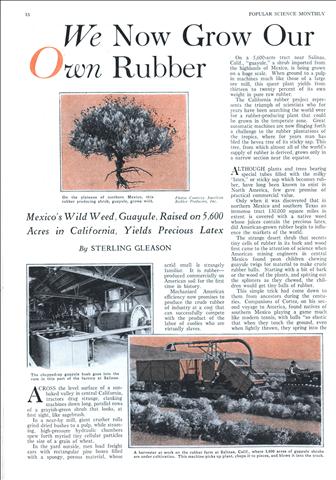 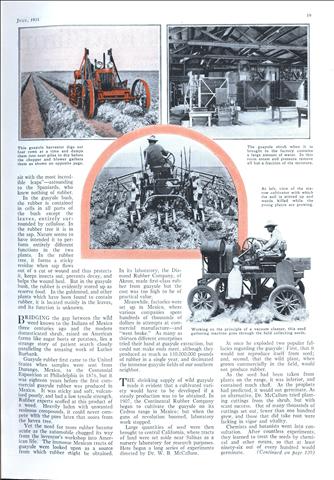 We Now Grow Our Own Rubber

ACROSS the level surface of a sun- baked valley in central California, tractors drag strange, clanking machines down long, parallel rows of a grayish-green shrub that looks, at first sight, like sagebrush.

Mechanix Illustrated
Issue: Mar, 1951
Posted in: How to
Tags: collectors
3 Comments on Treasure in Your Attic (Mar, 1951) 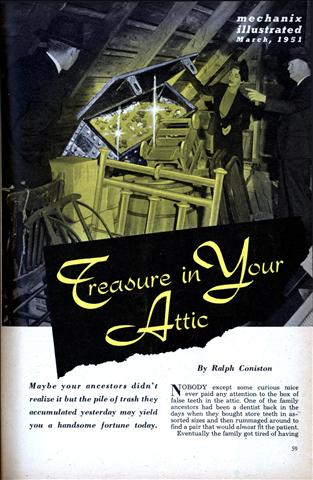 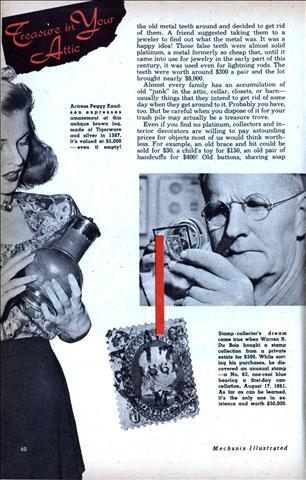 Treasure in Your Attic

Maybe your ancestors didn’t realize it but the pile of trash they accumulated yesterday may yield you a handsome fortune today.

NOBODY except some curious mice ever paid any attention to the box of false teeth in the attic. One of the family ancestors had been a dentist back in the days when they bought store teeth in assorted sizes and then rummaged around to find a pair that would almost fit the patient. Eventually the family got tired of having the old metal teeth around and decided to get rid of them. A friend suggested taking them to a jeweler to find out what the metal was. It was a happy idea! Those false teeth were almost solid platinum, a metal formerly so cheap that, until it came into use for jewelry in the early part of this century, it was used even for lightning rods. The teeth were worth around $300 a pair and the lot brought nearly $8,000. 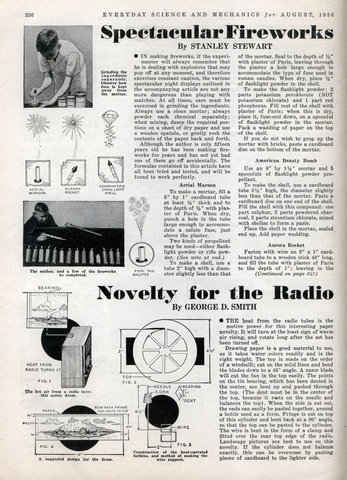 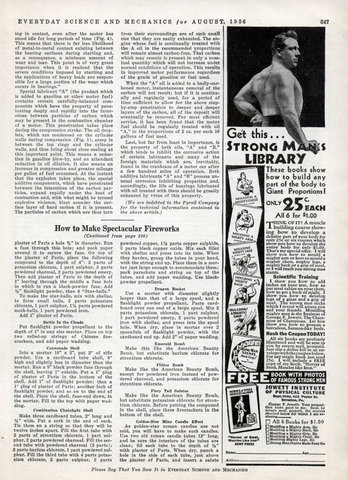 IN making fireworks, if the experimenter will always remember that he is dealing with explosives that may pop off at any moment, and therefore exercises constant caution, the various spectacular night displays outlined in the accompanying article are not any more dangerous than playing with matches. At all times, care must be exercised in grinding the ingredients. Always use a clean mortar; always powder each chemical separately; when mixing, dump the required portions on a sheet of dry paper and use a wooden spatula, or gently rock the contents of the paper back and forth. Although the author is only fifteen years old he has been making fireworks for years and has not yet had one of them go off accidentally. The formulas contained in this article have all been tried and tested, and will be found to work perfectly. 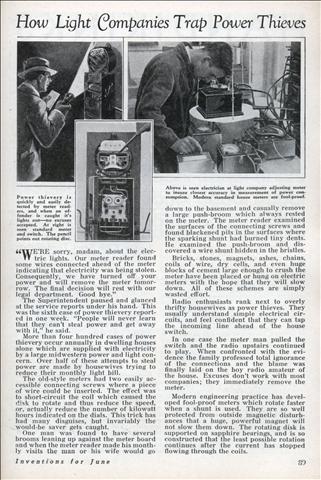 WE’RE sorry, madam, about the electric lights. Our meter reader found some wires connected ahead of the meter indicating that electricity was being stolen. Consequently, we have turned off your power and will remove the meter tomorrow. The final decision will rest with our legal department. Good bye.”

The Superintendent paused and glanced at the service reports under his hand. This was the sixth case of power thievery reported in one week. “People will never learn that they can’t steal power and get away with it, ” he said.

Full Disclosure: I attended Bronx Science (Class of 94). I think I actually did take electronics in that classroom on the third page. Though, the building was obviously a bit older when I went, it was still a pretty awesome school. In my sophomore year the school got a pair of IBM RS6000 workstations and a dedicated 19.2k internet connection, which was upgraded the next year to 56K. Doesn’t sound like a lot now, but it was pretty amazing for a high school at the time. I remember installing one of the early builds of Mosaic when it came out and just being bowled over by it. I used to use it everyday to download weather maps for a meteorology class I was taking. I also remember going to the Mosaic (or it may have been GNN) home page all the time to look at the “New Sites” section which was literally a listing of all the new websites that came online.

The school offered, and I think still does, a simply amazing variety of classes, particularly the electives. I took classes in electronics, robotics, forensics (way before C.S.I), meteorology, graphic arts and publishing (Using Quark 2, I think) and computer networking/telecommunications, which I have to say was pretty much the coolest class I’ve ever taken. When we arrived for the first day of class we were greeted with a stack of boxes containing brand new IBM 486DX2 PC’s, which were pretty damn good machines for the day. We had to set them all up, then repeatedly network them, both to each other and the internet. During that semester I think we learned to deploy networks using 10Base-5, 10Base-2, and 10Base-T. I think I was probably one of the first high-school kids in the country to start spending all of my free time on the web 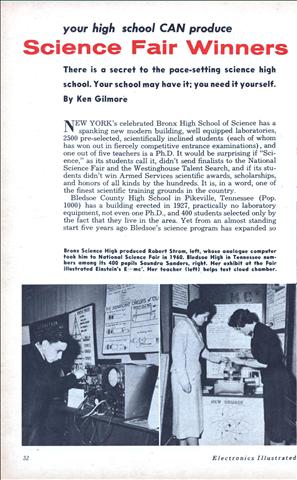 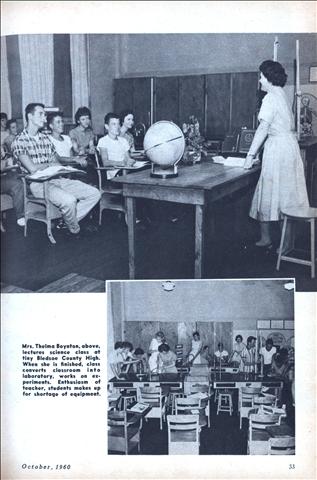 There is a secret to the pace-setting science high school. Your school may have it; you need it yourself.

NEW YORK’s celebrated Bronx High School of Science has a spanking new modem building, well equipped laboratories, 2500 pre-selected, scientifically inclined students (each of whom has won out in fiercely competitive entrance examinations), and one out of five teachers is a Ph. D. It would be surprising if “Science, ” as its students call it, didn’t send finalists to the National Science Fair and the Westinghouse Talent Search, and if its students didn’t win Armed Services scientific awards, scholarships, and honors of all kinds by the hundreds. It is, in a word, one of the finest scientific training grounds in the country.

Electronics Illustrated
Issue: Dec, 1960
Posted in: How to, Science
Tags: science fairs
4 Comments on How To Win At Science Fairs (Dec, 1960) 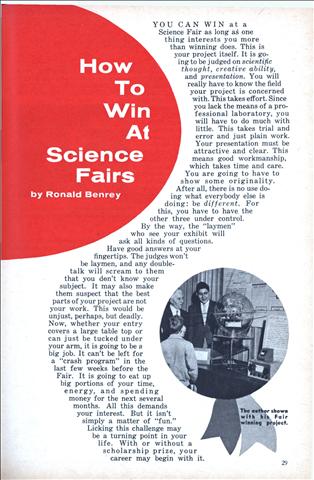 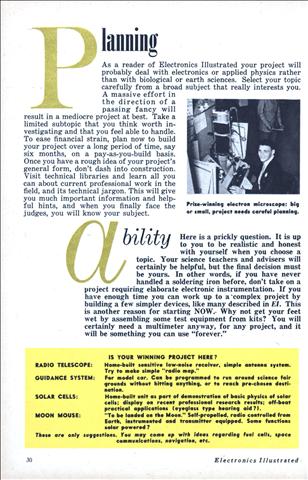 How To Win At Science Fairs

YOU CAN WIN at a Science Fair as long as one thing interests you more than winning does. This is your project itself. It is going to be judged on scientific thought, creative ability, and presentation. You will really have to know the field your project is concerned with. This takes effort. Since you lack the means of a professional laboratory, you will have to do much with little. This takes trial and error and just plain work. Your presentation must be attractive and clear. 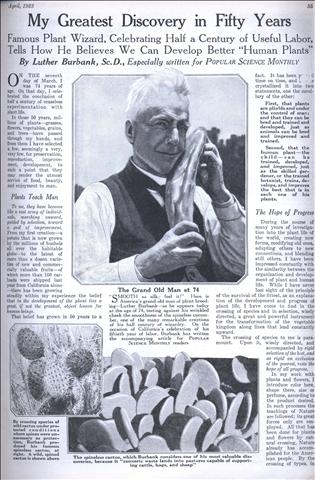 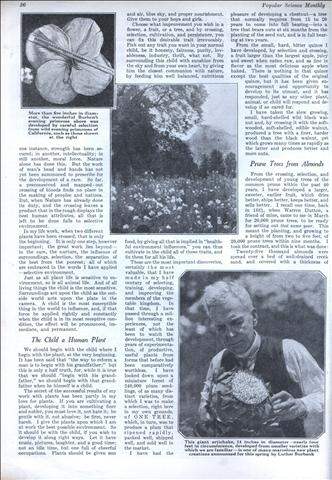 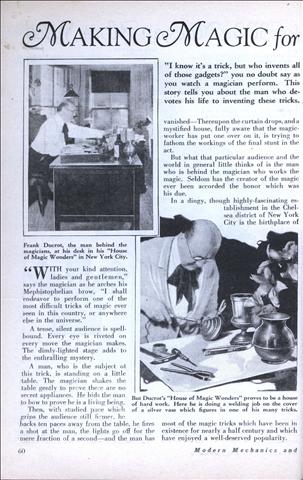 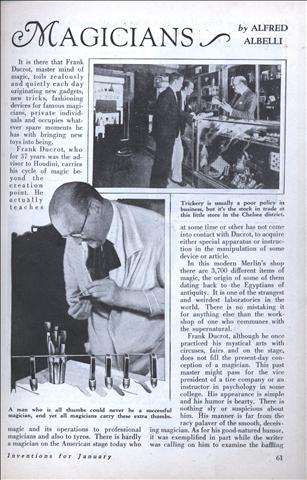 “I know it’s a trick, but who invents all of those gadgets?” you no doubt say as you watch a magician perform. This story tells you about the man who devotes his life to inventing these tricks. .

“With your kind attention, ladies and gentlemen,” says the magician as he arches his Mephistophelian brow, “I shall endeavor to perform one of the most difficult tricks of magic ever seen in this country, or anywhere else in the universe.”

A tense, silent audience is spellbound. Every eye is riveted on every move the magician makes. The dimly-lighted stage adds to the enthralling mystery.