Mechanix Illustrated
Issue: Oct, 1956
Posted in: How to, Personal Appearance
6 Comments on HOW TO GROW A BEARD (Oct, 1956) 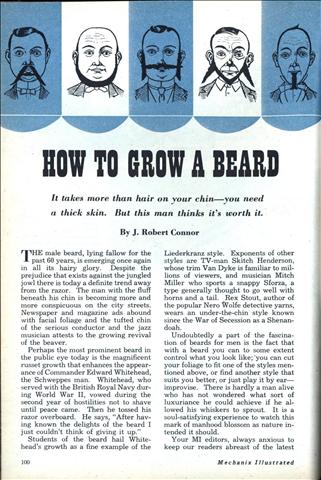 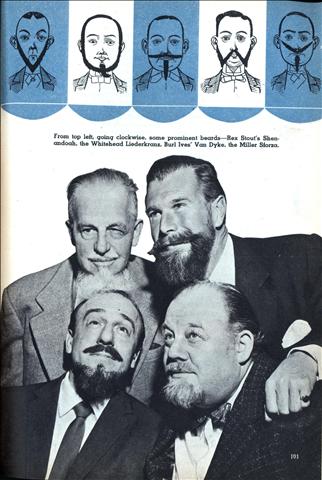 HOW TO GROW A BEARD

It takes more than hair on your chin—you need a thick skin. But this man thinks it’s worth it.

THE male beard, lying fallow for the past 60 years, is emerging once again in all its hairy glory. Despite the prejudice that exists against the jungled jowl there is today a definite trend away from the razor. The man with the fluff beneath his chin is becoming more and more conspicuous on the city streets. Newspaper and magazine ads abound with facial foliage and the tufted chin of the serious conductor and the jazz musician attests to the growing revival of the beaver. 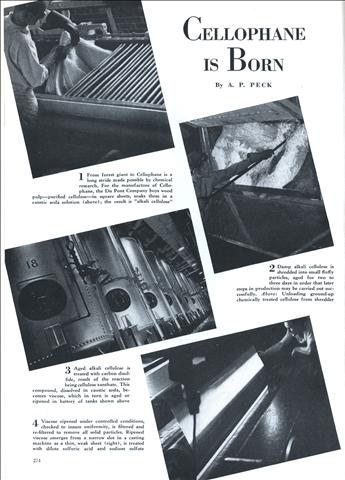 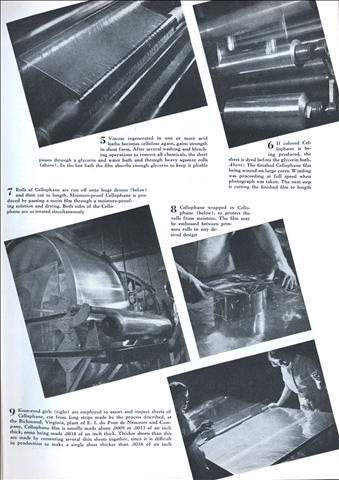 1. From forest giant to Cellophane is a long stride made possible by chemical research. For the manufacture of Cellophane, the Du Pont Company buys wood pulp—purified cellulose—in square sheets, soaks them in a caustic soda solution (above); the result is “alkali cellulose”.

2. Damp alkali cellulose is shredded into small fluffy particles, aged for two to three days in order that later steps in production may be carried out successfully. Above: Unloading ground-up chemically treated cellulose from shredder.

American Magazine
Issue: Oct, 1932
Posted in: How to
Tags: self-improvement
2 Comments on How to Get the Things YOU Want (Oct, 1932) 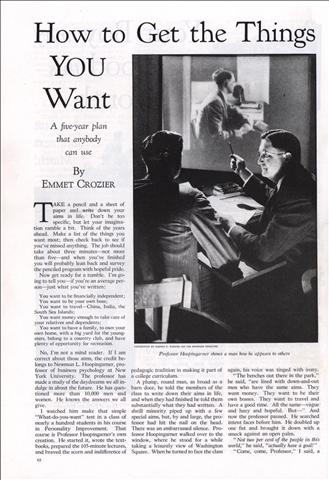 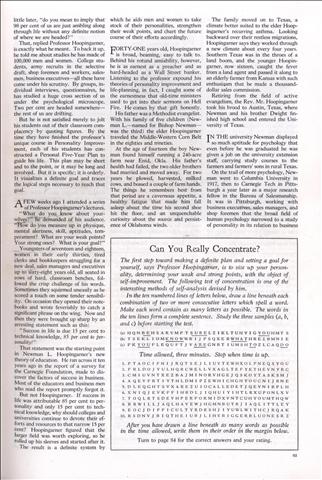 How to Get the Things YOU Want

a five-year plan that anybody can use By Emmet Crozier

TAKE a pencil and a sheet of paper and write down your aims in life. Don’t be too specific, but let your imagination ramble a bit. Think of the years ahead. Make a list of the things you want most; then check back to see if you’ve missed anything. The job should take about three minutes—not more than five—and when you’ve finished you will probably lean back and survey the penciled program with hopeful pride. 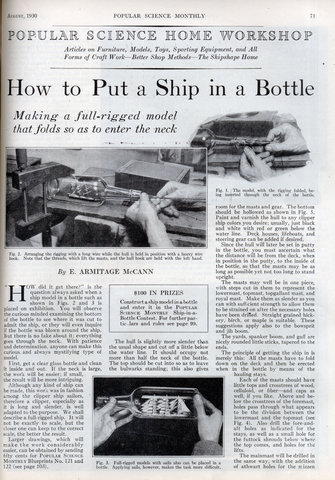 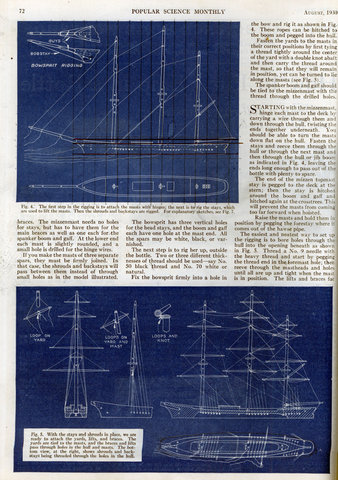 How to Put a Ship in a Bottle

“HOW did it get there?” is the question always asked when a ship model in a bottle such as shown in Figs. 2 and 3 is placed on exhibition. You will observe the curious minded examining the bottom of the bottle to see where it was cut to admit the ship, or they will even inquire if the bottle was blown around the ship. But there is no fake about it; everything goes through the neck. With patience and determination, anyone can make this curious and always mystifying type of model.

Modern Mechanix
Issue: Mar, 1932
Posted in: How to
Tags: magic
No Comments on Secrets of East Indian Magic Exposed (Mar, 1932) 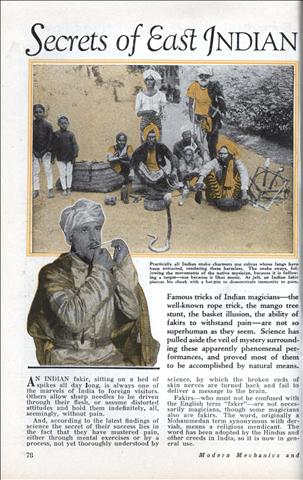 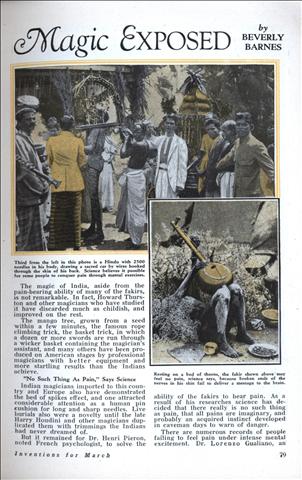 Famous tricks of Indian magicians—the well-known rope trick, the mango tree stunt, the basket illusion, the ability of fakirs to withstand pain—are not so superhuman as they seem. Science has pulled aside the veil of mystery surrounding these apparently phenomenal performances, and proved most of them , to be accomplished by natural means.

Modern Mechanix
Issue: Sep, 1938
Posted in: How to
Tags: how its made
3 Comments on MECHANICAL ARTISTS BLOW GLASS BOTTLES (Sep, 1938) 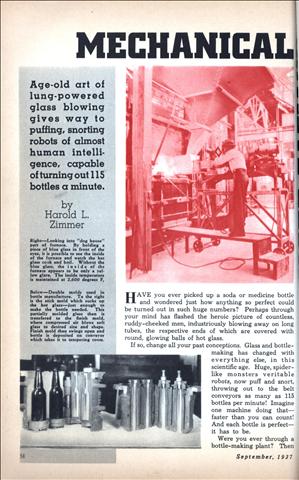 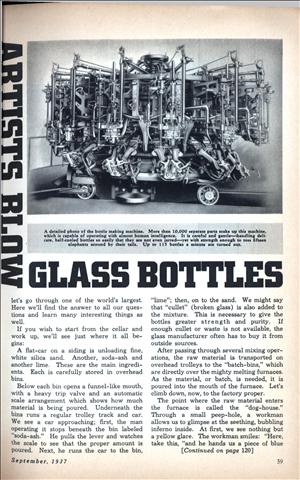 HAVE you ever picked up a soda or medicine bottle and wondered just how anything so perfect could be turned out in such huge numbers? Perhaps through your mind has flashed the heroic picture of countless, ruddy-cheeked men, industriously blowing away on long tubes, the respective ends of which are covered with round, glowing balls of hot glass.

Modern Mechanix
Issue: May, 1931
Posted in: Entertainment, How to
No Comments on Easy Juggling Tricks (May, 1931) 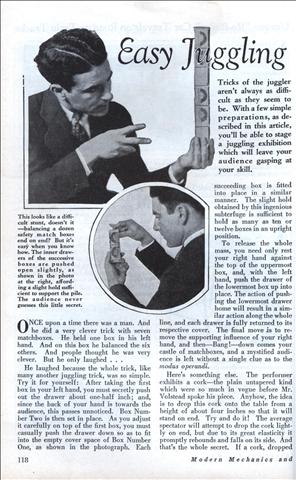 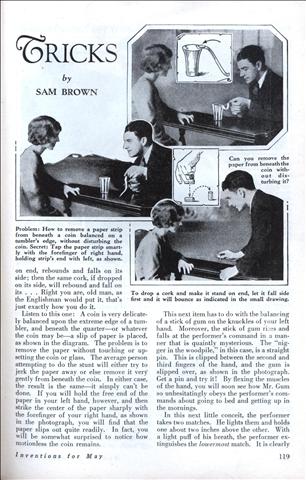 Tricks of the juggler aren’t always as difficult as they seem to be. With a few simple preparations, as described in this article, you’ll be able to stage a juggling exhibition which will leave your audience gasping at your skill.

ONCE upon a time there was a man. And he did a very clever trick with seven matchboxes. He held one box in his left hand. And on this box he balanced the six others. And people thought he was very clever. But he only laughed . . .

He laughed because the whole trick, like many another juggling trick, was so simple. Try it for yourself: After taking the first box in your left hand, you must secretly push out the drawer about one-half inch; and, since the back of your hand is towards the audience, this passes unnoticed. 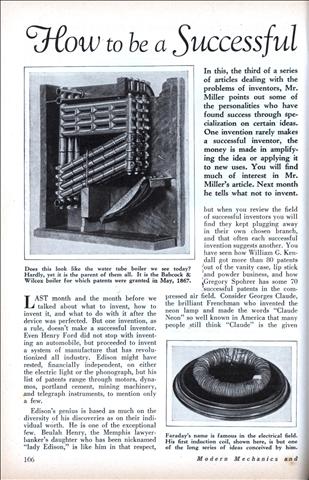 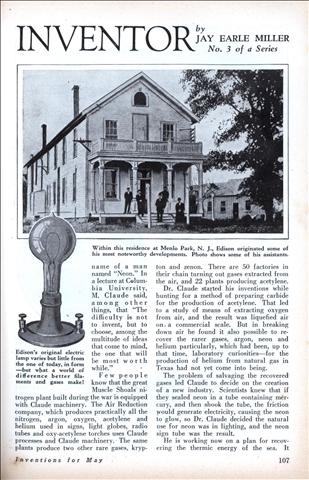 HOW to be a Successful INVENTOR

by JAY EARLE MILLER
No. 3 of a Series.

In this, the third of a series of articles dealing with the problems of inventors, Mr. Miller points out some of the personalities who have found success through Specialization on certain ideas. One invention rarely makes a successful inventor, the money is made in amplifying the idea or applying it to new uses. You will find much of interest in Mr. Miller’s article. Next month he tells what not to invent.

LAST month and the month before we talked about what to invent, how to invent it, and what to do with it after the device was perfected. But one invention, as a rule, doesn’t make a successful inventor. 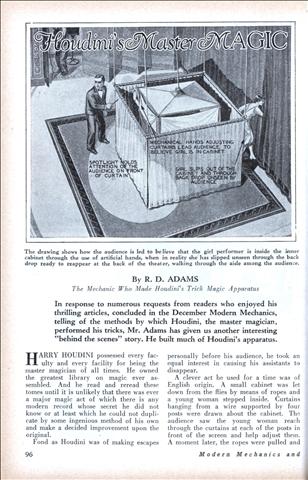 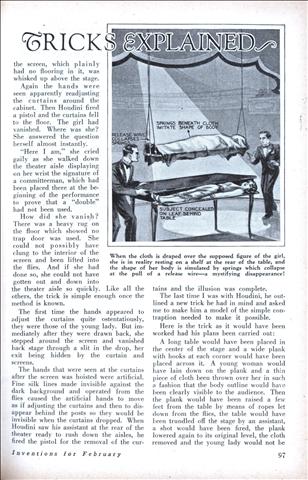 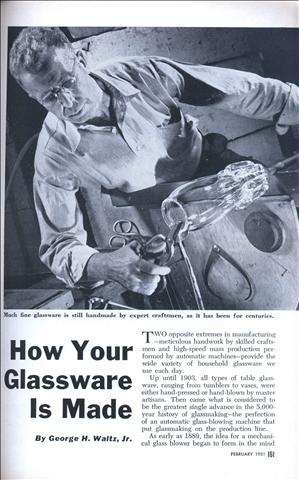 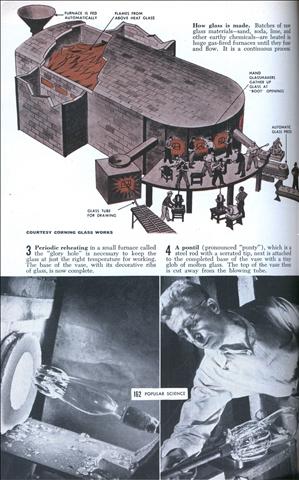 How Your Glassware Is Made

TWO opposite extremes in manufacturing —meticulous handwork by skilled craftsmen and high-speed mass production performed by automatic machines—provide the wide variety of household glassware we use each day.

Up until 1903, all types of table glassware, ranging from tumblers to vases, were either hand-pressed or hand-blown by master artisans. Then came what is considered to be the greatest single advance in the 5,000-year history of glassmaking—the perfection of an automatic glass-blowing machine that put glassmaking on the production line.