“If the woman in the next block would remember that she married her husband because he was her superior, and content herself with her pride in him and her delight in serving him, as she did during the first year of their marriage, all might be well with them. “ 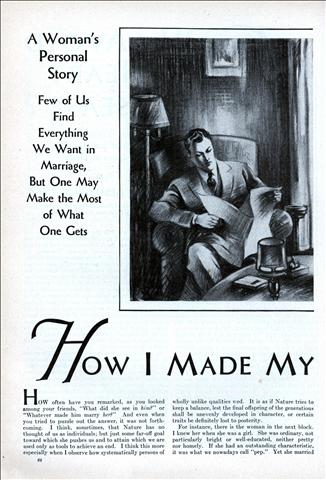 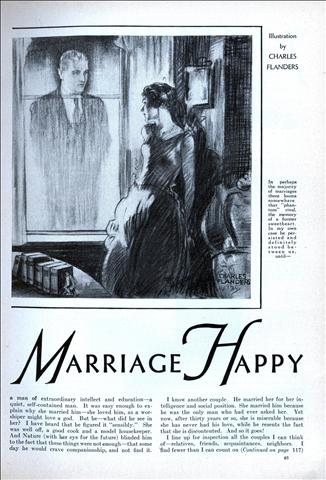 How I Made My Marriage Happy

A Woman’s Personal Story Few of Us Find Everything We Want in Marriage, But One May Make the Most of What One Gets

HOW often have you remarked, as you looked among your friends, “What did she see in him?” or “Whatever made him marry her?” And even when you tried to puzzle out the answer, it was not forthcoming. I think, sometimes, that Nature has no thought of us as individuals; but just some far-off goal toward which she pushes us and to attain which we are used only as tools to achieve an end. 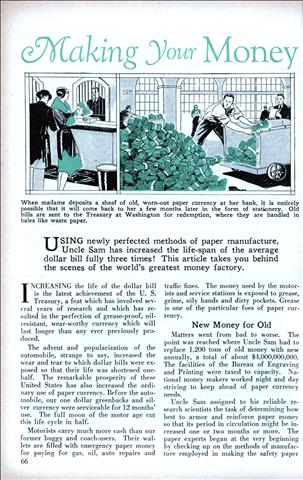 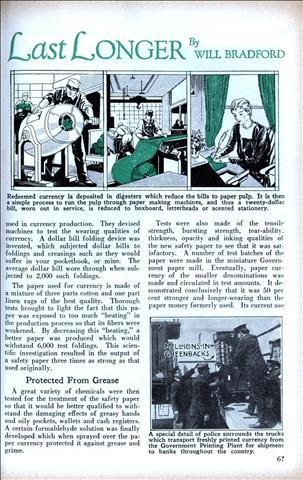 USING newly perfected methods of paper manufacture, Uncle Sam has increased the life-span of the average dollar bill fully three times! This article takes you behind the scenes of the world’s greatest money factory.

INCREASING the life of the dollar bill is the latest achievement of the U. S. Treasury, a feat which has involved several years of research and which has resulted in the perfection of grease-proof, oil-resistant, wear-worthy currency which will last longer than any ever previously produced.

Physical Culture
Issue: Aug, 1930
Posted in: How to, Personal Appearance
4 Comments on HOW an Artists’ Model Keeps Her Beauty (Aug, 1930) 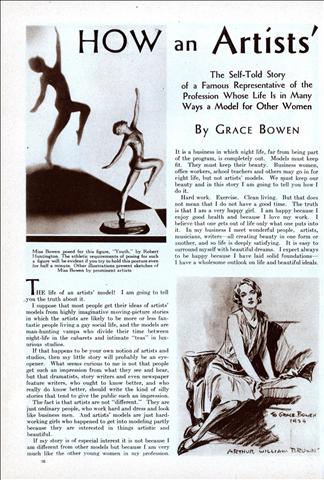 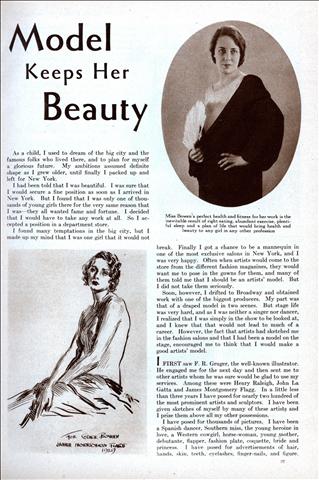 HOW an Artists’ Model Keeps Her Beauty

THE life of an artists’ model! I am going to tell you the truth about it.

I suppose that most people get their ideas of artists’ models from highly imaginative moving-picture stories in which the artists are likely to be more or less fantastic people living a gay social life, and the models are man-hunting vamps who divide their time between night-life in the cabarets and intimate “teas” in luxurious studios. 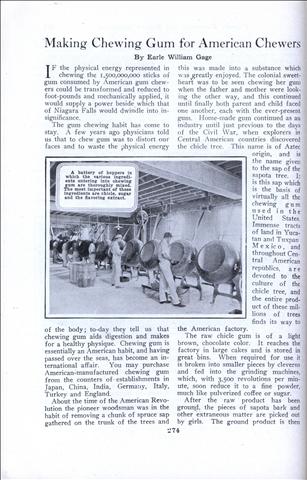 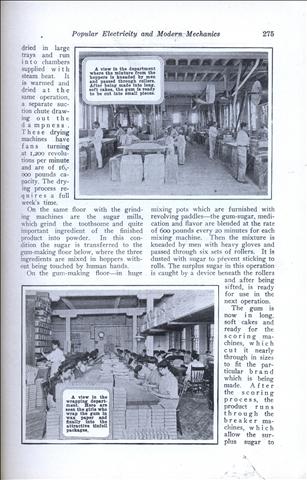 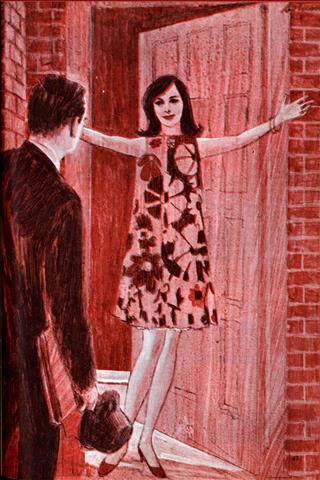 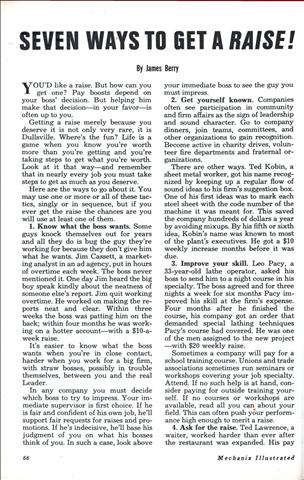 SEVEN WAYS TO GET A RAISE!

YOU’D like a raise. But how can you get one? Pay boosts depend on your boss’ decision. But helping him make that decision—in your favor—is often up to you.

Getting a raise merely because you deserve it is not only very rare, it is Dullsville. Where’s the fun? Life is a game when you know you’re worth more than you’re getting and you’re taking steps to get what you’re worth. Look at it that way—and remember that in nearly every job you must take steps to get as much as you deserve. 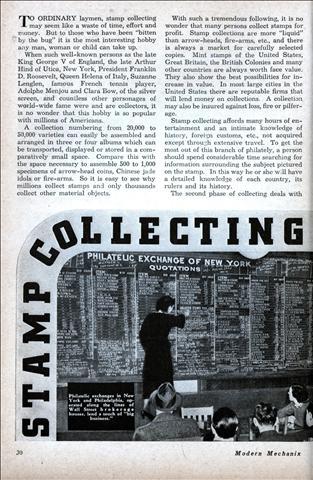 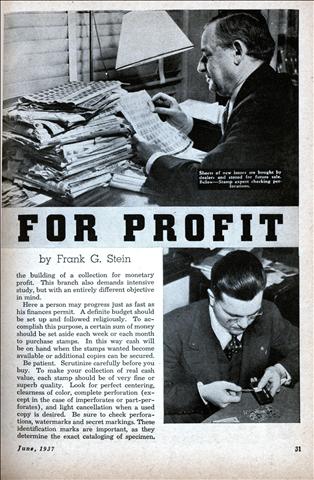 TO ORDINARY laymen, stamp collecting may seem like a waste of time, effort and money. But to those who have been “bitten by the bug” it is the most interesting hobby any man, woman or child can take up.

When such well-known persons as the late King George V of England, the late Arthur Hind of Utica, New York, President Franklin D. Roosevelt, Queen Helena of Italy, Suzanne Lenglen, famous French tennis player, Adolphe Menjou and Clara Bow, of the silver screen, and countless other personages of world-wide fame were and are collectors, it is no wonder that this hobby is so popular with millions of Americans. 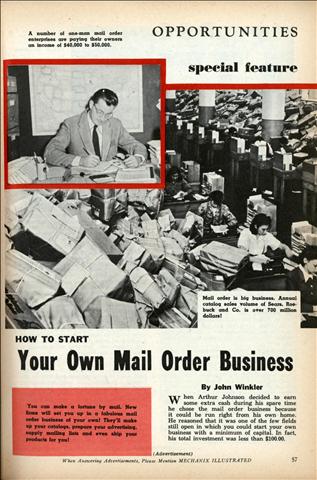 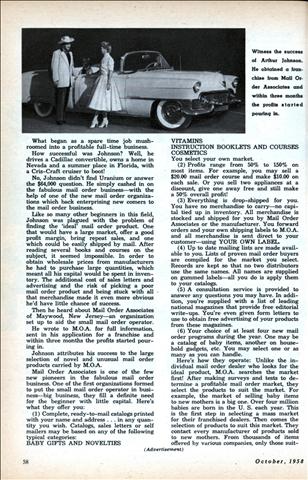 Your Own Mail Order Business

When Arthur Johnson decided to earn some extra cash during his spare time he chose the mail order business because it could be run right from his own home. He reasoned that it was one of the few fields still open in which you could start your own business with a minimum of capital. In fact, his total investment was less than $100.00.

What began as a spare time job mushroomed into a profitable full-time business.

How successful was Johnson? Well, he drives a Cadillac convertible, owns a home in Nevada and a summer place in Florida, with a Cris-Craft cruiser to boot! 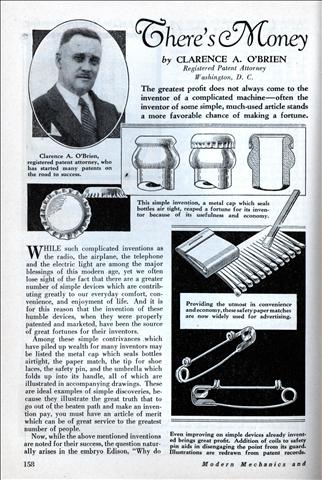 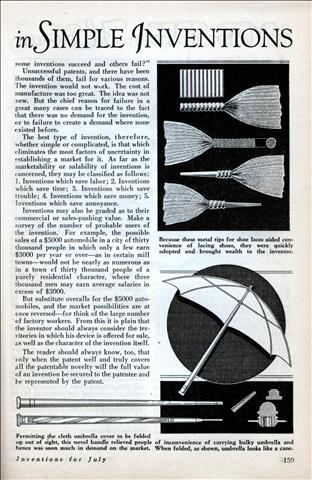 The greatest profit does not always come to the inventor of a complicated machine—often the inventor of some simple, much-used article stands a more favorable chance of making a fortune.

WHILE such complicated inventions as the radio, the airplane, the telephone and the electric light are among the major blessings of this modern age, yet we often lose sight of the fact that there are a greater number of simple devices which are contributing greatly to our everyday comfort, convenience, and enjoyment of life.

Mechanix Illustrated
Issue: Apr, 1957
Posted in: How to
No Comments on Suggest Your Way To Success (Apr, 1957) 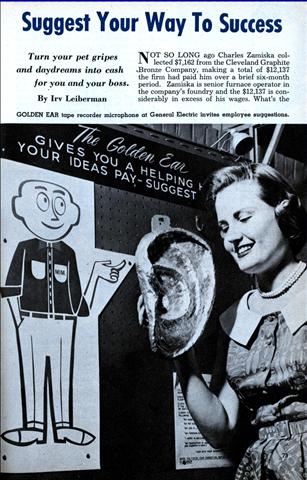 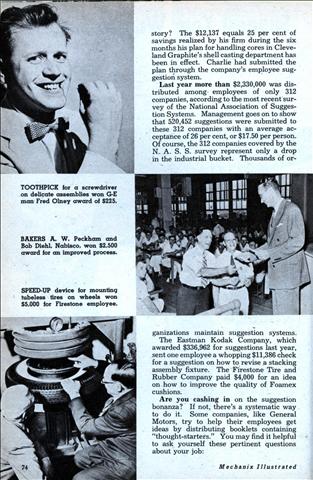 Suggest Your Way To Success

Turn your pet gripes and daydreams into cash for you and your boss.

NOT SO LONG ago Charles Zamiska collected $7,162 from the Cleveland Graphite Bronze Company, making a total of $12,137 the firm had paid him over a brief six-month period. Zamiska is senior furnace operator in the company’s foundry and the $12,137 is considerably in excess of his wages. What’s the story? The $12,137 equals 25 per cent of savings realized by his firm during the six months his plan for handling cores in Cleveland Graphite’s shell casting department has been in effect. Charlie had submitted the plan through the company’s employee suggestion system. 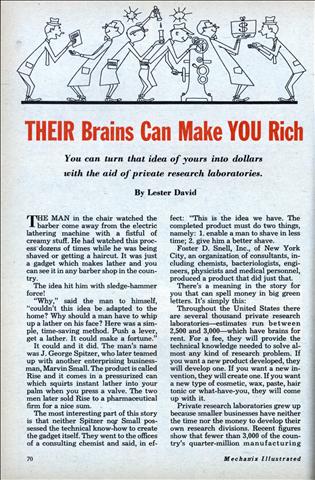 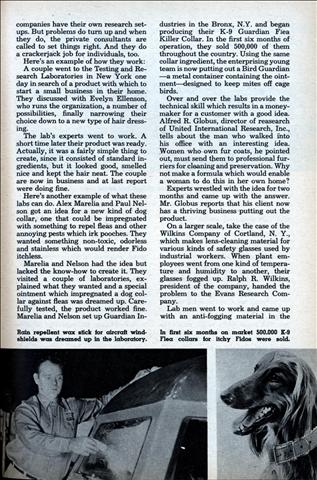