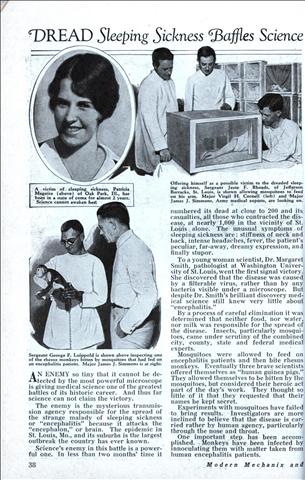 AN ENEMY so tiny that it cannot be detected by the most powerful microscope is giving medical science one of the greatest battles of its historic career. And thus far science can not claim the victory.

The enemy is the mysterious transmission agency responsible for the spread of the strange malady of sleeping sickness or “encephalitis” because it attacks the “encephalon,” or brain. The epidemic in St. Louis, Mo., and its suburbs is the largest outbreak the country has ever known. 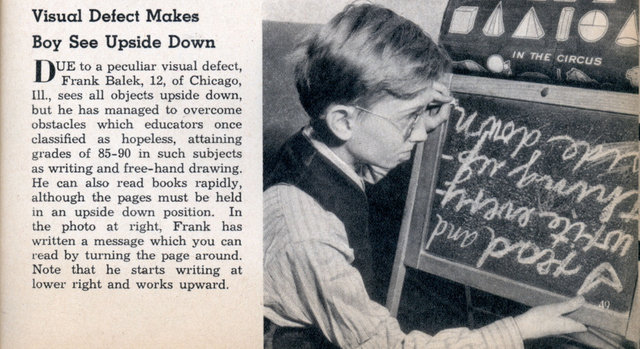 DUE to a peculiar visual defect, Frank Balek, 12, of Chicago, ill., sees all objects upside down, but he has managed to overcome obstacles which educators once classified as hopeless, attaining grades of 85-90 in such subjects as writing and free-hand drawing. He can also read books rapidly, although the pages must be held in an upside down position. In the photo at right, Frank has written a message which you can read by turning the page around. Note that he starts writing at lower right and works upward. 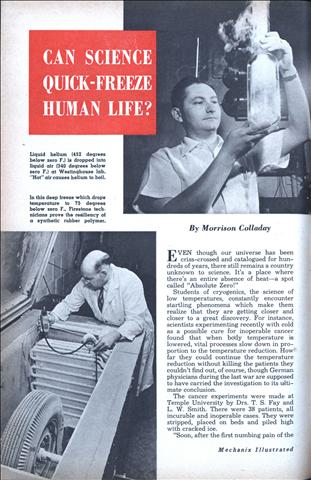 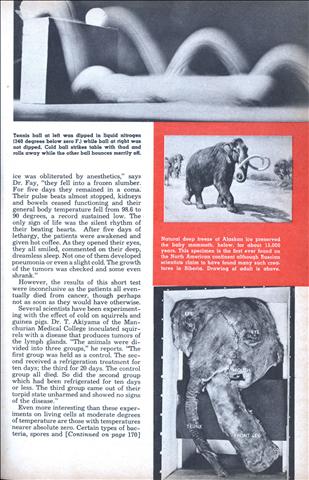 EVEN though our universe has been criss-crossed and catalogued for hundreds of years, there still remains a country unknown to science. It’s a place where there’s an entire absence of heat—a spot called “Absolute Zero!” 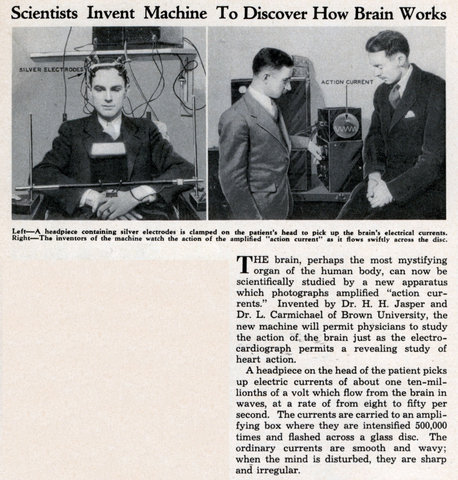 THE brain, perhaps the most mystifying organ of the human body, can now be scientifically studied by a new apparatus which photographs amplified “action currents.” Invented by Dr. H. H. Jasper and Dr. L. Carmichael of Brown University, the new machine will permit physicians to study the action of the brain just as the electrocardiograph permits a revealing study of heart action. 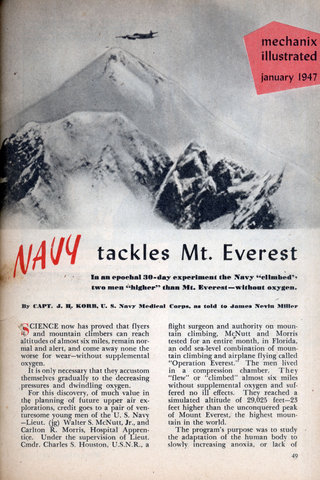 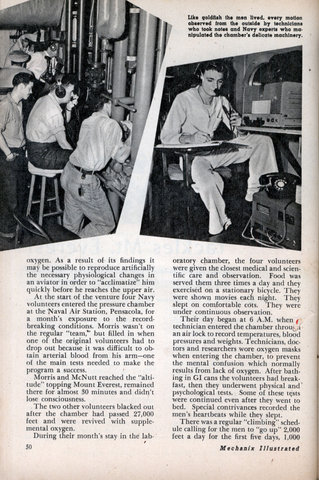 SCIENCE now has proved that flyers and mountain climbers can reach altitudes of almost six miles, remain normal and alert, and come away none the worse for wear—without supplemental oxygen.

It is only necessary that they accustom themselves gradually to the decreasing pressures and dwindling oxygen. 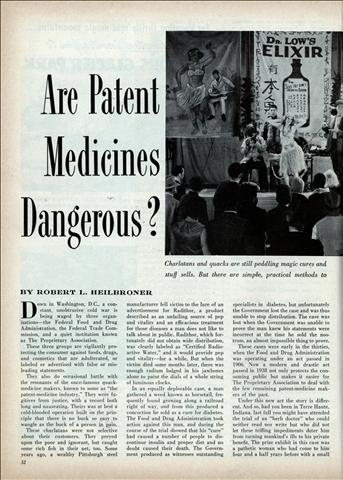 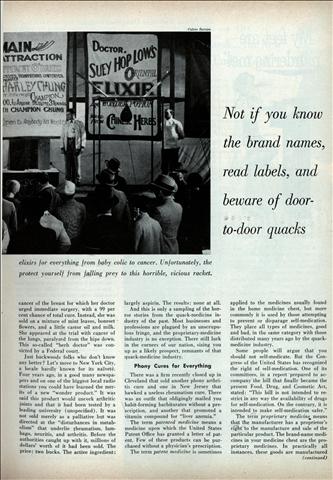 Down in Washington. D.C., a constant, unobtrusive cold war is being waged by three organizations—the Federal Food and Drug Administration, the Federal Trade Commission, and a quiet institution known as The Proprietary Association.

These three groups are vigilantly protecting the consumer against foods, drugs, and cosmetics that are adulterated, or labeled or advertised with false or misleading statements.

They also do occasional battle with the remnants of the once-famous quack-medicine makers, known to some as “the patent-medicine industry.” They were fugitives from justice, with a record both long and nauseating. Theirs was at best a cold-blooded operation built on the principle that there is no buck so easy to wangle as the buck of a person in pain.

HERE’S AN EYE OPENER FOR YOU!

THE Electrical Show recently held in the Grand Central Palace, New York City, presented showings of several very novel electrical devices. One of the most practical inventions was a magnetic instrument for removing metallic particles from the human eye.

The human optic is very delicate and must be freed from any bit of lodged matter at once. If chips are allowed to remain within the eyelid they work into the eye-ball and nearly always cause blindness.

This machine has at last answered the cry for a painless method of removing metallic deposits from the eye easily. 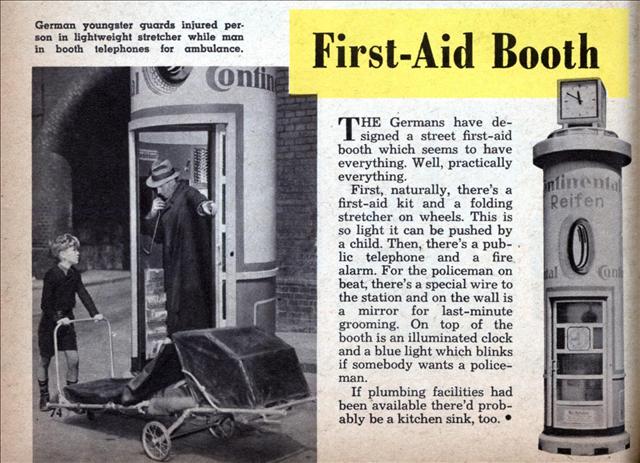 THE Germans have designed a street first-aid booth which seems to have everything. Well, practically everything.

First, naturally, there’s a first-aid kit and a folding stretcher on wheels. This is so light it can be pushed by a child. Then, there’s a public telephone and a fire alarm. For the policeman on beat, there’s a special wire to the station and on the wall is a mirror for last-minute grooming. On top of the booth is an illuminated clock and a blue light which blinks if somebody wants a policeman.

If plumbing facilities had been available there’d probably be a kitchen sink, too. 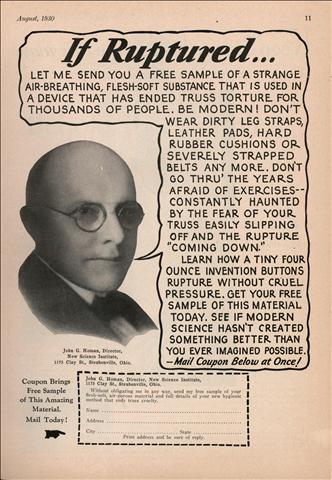 LET ME SEND YOU A FREE SAMPLE OF A STRANGE AIR-BREATHING, FLESH-SOFT SUBSTANCE THAT IS USED IN, A DEVICE THAT HAS ENDED TRUSS TORTURE. FOR THOUSANDS OF PEOPLE, BE MODERN! DON’T WEAR DIRTY LEG STRAPS, LEATHER PADS, HARD RUBBER CUSHIONS OR SEVERELY STRAPPED BELTS ANY MORE.

Modern Mechanix
Issue: May, 1932
Posted in: Medical
6 Comments on Have Your Next Tooth Filled Electrically! (May, 1932)

Have Your Next Tooth Filled Electrically! (May, 1932) 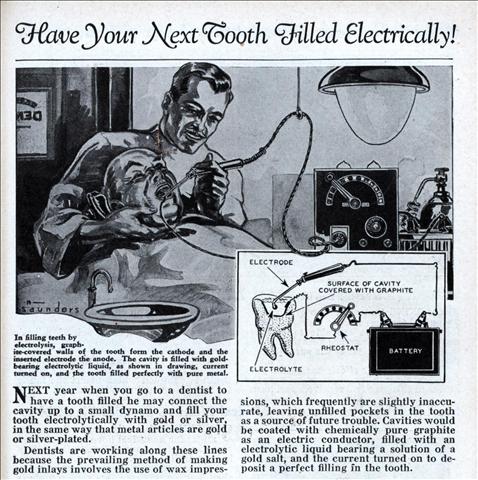 Have Your Next Tooth Filled Electrically!

NEXT year when you go to a dentist to have a tooth filled he may connect the cavity up to a small dynamo and fill your tooth electrolytically with gold or silver, in the same way that metal articles are gold or silver-plated.

Dentists are working along these lines because the prevailing method of making gold inlays involves the use of wax impressions, which frequently are slightly inaccurate, leaving unfilled pockets in the tooth as a source of future trouble. Cavities would be coated with chemically pure graphite as an electric conductor, filled with an electrolytic liquid bearing a solution of a gold salt, and the current turned on to deposit a perfect filling in the tooth.