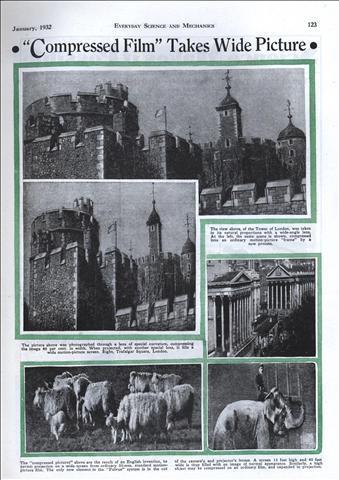 The view above, of the Tower of London, was taken in its natural proportions with a wide-angle lens. At the left, the same scene is shown, compressed into an ordinary motion-picture “frame” by a new process. 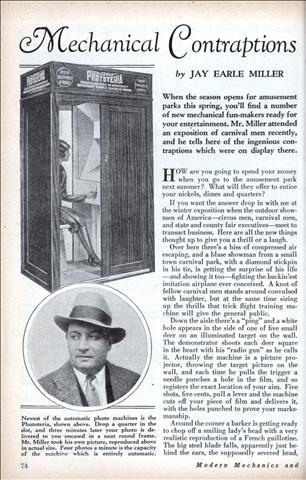 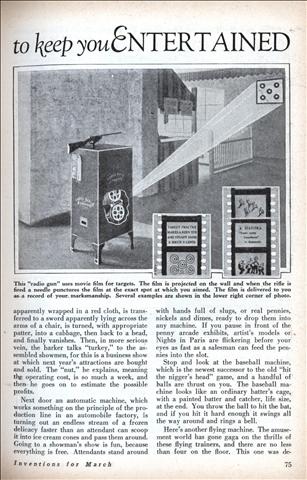 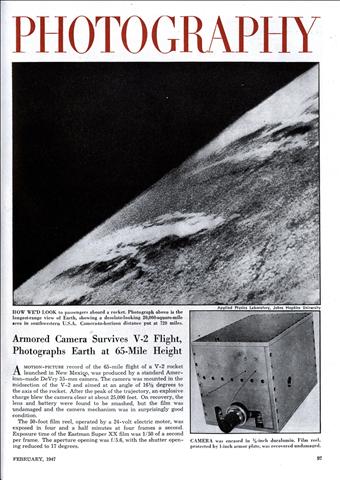 A motion-picture record of the 65-mile flight of a V-2 rocket launched in New Mexico, was produced by a standard American-made DeVry 35-mm camera. The camera was mounted in the midsection of the V-2 and aimed at an angle of 16-1/2 degrees to the axis of the rocket. 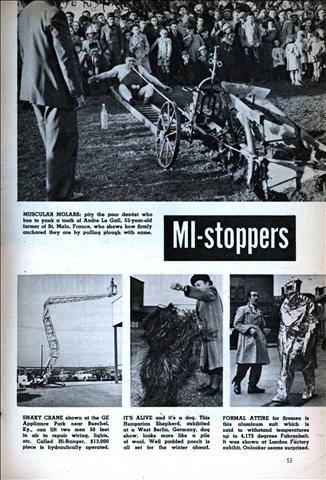 MUSCULAR MOLARS: pity the poor dentist who has to yank a tooth of Andre Le Gall, 53-year-old farmer of St. Malo. France, who shows how firmly anchored they are by pulling plough with same. 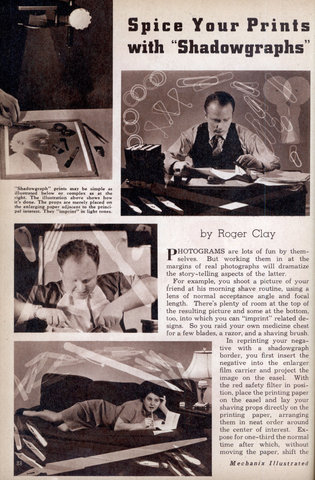 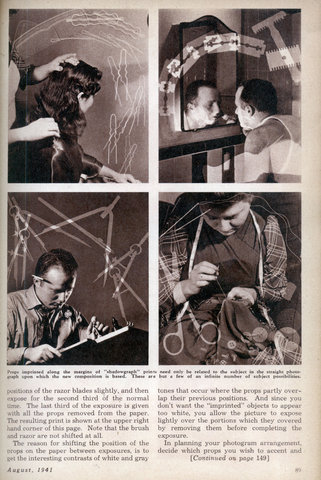 Spice Your Prints with “Shadowgraphs”

PHOTOGRAMS are lots of fun by themselves. But working them in at the margins of real photographs will dramatize the story-telling aspects of the latter.

For example, you shoot a picture of your friend at his morning shave routine, using a lens of normal acceptance angle and focal length. There’s plenty of room at the top of the resulting picture and some at the bottom, too, into which you can “imprint” related designs. So you raid your own medicine chest for a few blades, a razor, and a shaving brush. 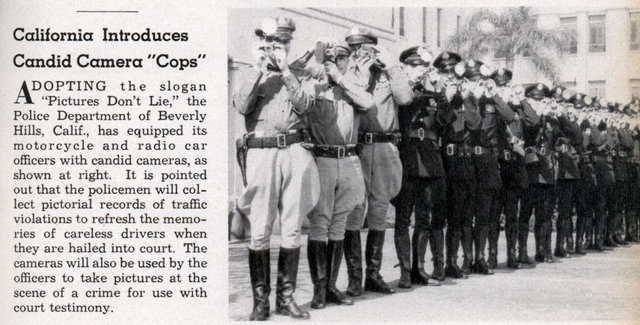 Adopting the slogan “Pictures Don’t Lie,” the Police Department of Beverly Hills, Calif., has equipped its motorcycle and radio car officers with candid cameras, as shown at right. It is pointed out that the policemen will collect pictorial records of traffic violations to refresh the memories of careless drivers when they are hailed into court. The cameras will also be used by the officers to take pictures at the scene of a crime for use with court testimony.

I’m pretty amazed this got printed. I doubt it would have 10 years later. 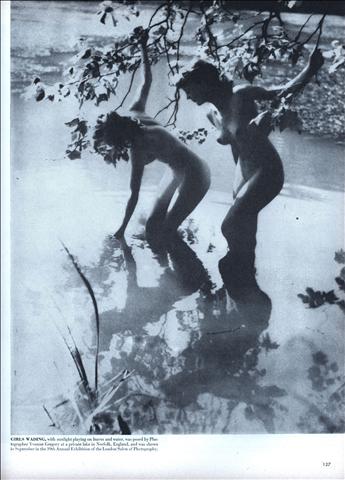 GIRLS WADING, with sunlight playing on leaves and water, was posed by Photographer Yvonne Gregory at a private lake in Norfolk, England, and was shown in September in the 39th Annual Exhibition of the London Salon of Photography. 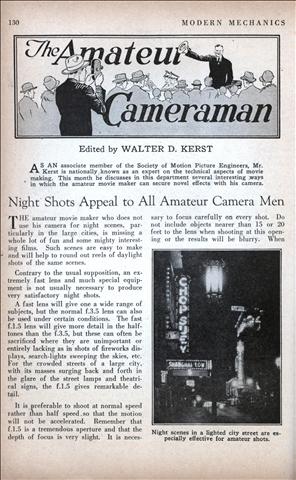 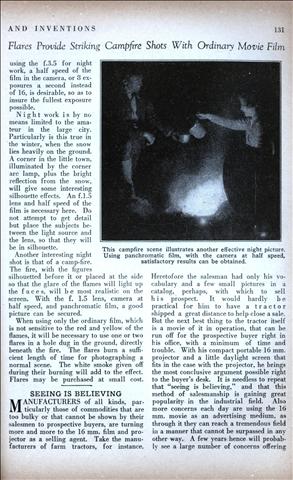 AS AN associate member of the Society of Motion Picture Engineers, Mr. Kerst is nationally known as an expert on the technical aspects of movie making. This month he discusses in this department several interesting ways in which the amateur movie maker can secure novel effects with his camera.

This seems very similar to a xerox machine. 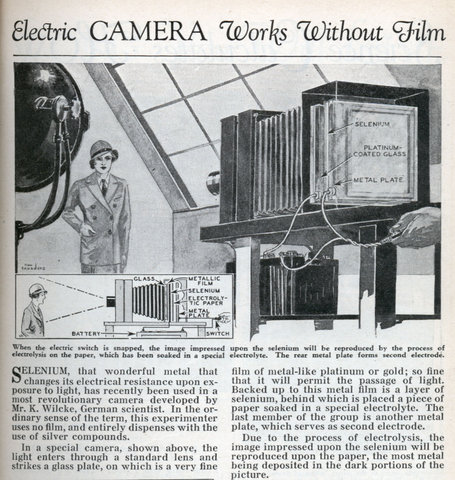 SELENIUM, that wonderful metal that changes its electrical resistance upon exposure to light, has recently been used in a most revolutionary camera developed by Mr. K. Wilcke, German scientist. In the ordinary sense of the term, this experimenter uses no film, and entirely dispenses with the use of silver compounds. 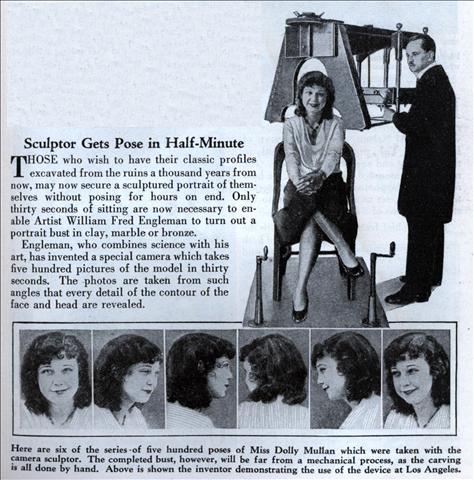 Sculptor Gets Pose in Half-Minute

THOSE who wish to have their classic profiles excavated from the ruins a thousand years from now, may now secure a sculptured portrait of themselves without posing for hours on end. Only thirty seconds of sitting are now necessary to enable Artist William Fred Engleman to turn out a portrait bust in clay, marble or bronze.

Engleman, who combines science with his art, has invented a special camera which takes five hundred pictures of the model in thirty seconds. The photos are taken from such angles that every detail of the contour of the face and head are revealed.