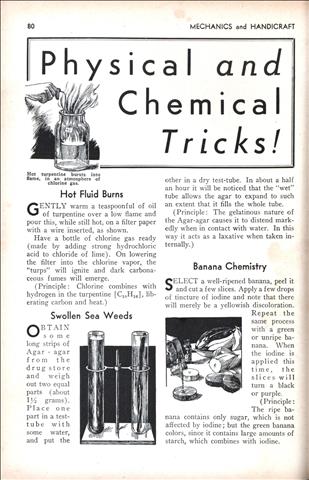 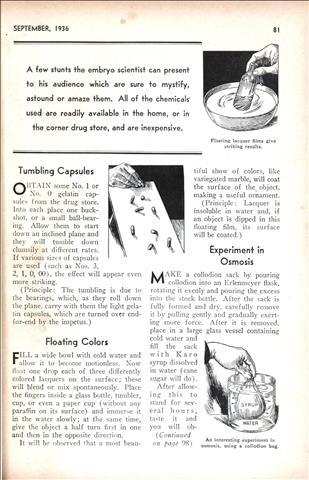 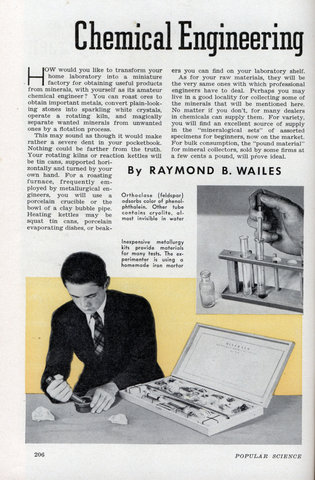 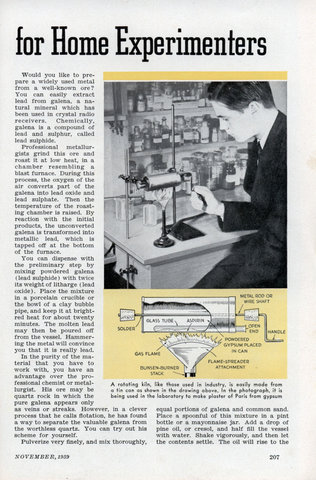 HOW would you like to transform your home laboratory into a miniature factory for obtaining useful products from minerals, with yourself as its amateur chemical engineer? You can roast ores to obtain important metals, convert plain-looking stones into sparkling white crystals, operate a rotating kiln, and magically separate wanted minerals from unwanted ones by a flotation process. 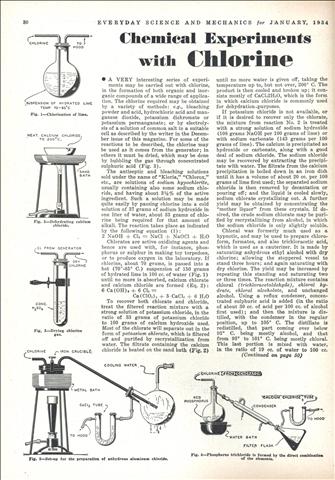 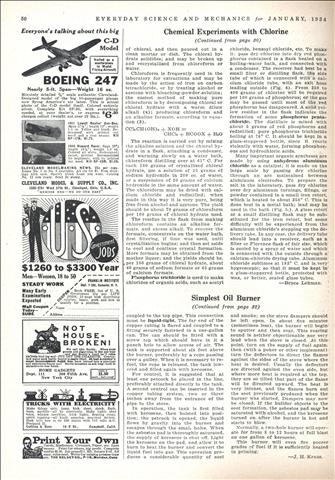 • A VERY interesting series of experiments may be carried out with chlorine, in the formation of both organic and inorganic compounds of a wide range of application.

I like how it states that all of the stunts are harmless then proceeds to explain all the ways the ingredients are not. 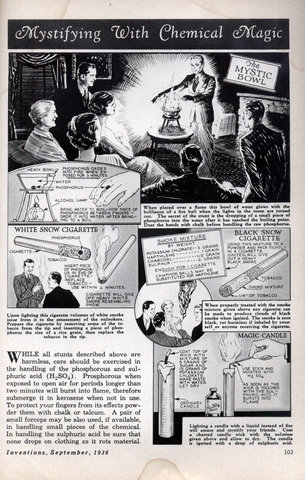 WHILE all stunts described above are harmless, care should be exercised in the handling of the phosphorous and sulphuric acid (H2S04). Phosphorous when exposed to open air for periods longer than two minutes will burst into flame, therefore submerge it in kerosene when not in use. To protect your fingers from its effects powder them with chalk or talcum. A pair of small forceps may be also used, if available, in handling small pieces of the chemical. In handling the sulphuric acid be sure that none drops on clothing as it rots material.

Popular Science
Issue: May, 1929
Posted in: Architecture, Chemistry, Sign of the Times
Tags: mining, seadromes
No Comments on Glimpses of of Men in the Public Eye (May, 1929) 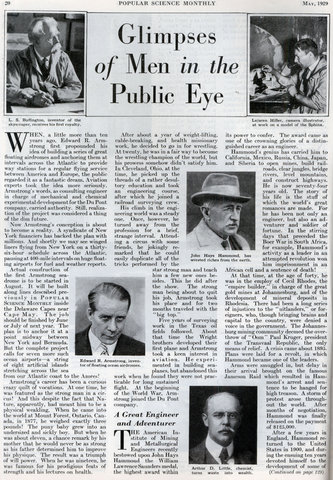 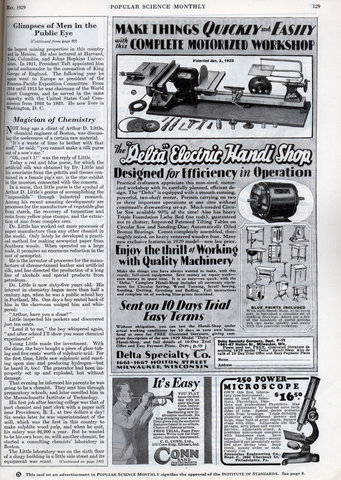 Glimpses of of Men in the Public Eye

WHEN, a little more than ten years ago, Edward R. Armstrong first propounded his idea of building a series of great floating airdromes and anchoring them at intervals across the Atlantic to provide way stations for a regular flying service between America and Europe, the public regarded it as a fantastic dream. Aviation experts took the idea more seriously. Armstrong’s words, as consulting engineer in charge of mechanical and chemical experimental development for the Du Pont company, carried authority. Still, realization of the project was considered a thing of the dim future.

Mechanix Illustrated
Issue: May, 1950
Posted in: Chemistry, DIY, Toys and Games
4 Comments on make your own BUBBLE COMPOUND (May, 1950)

Glim was a brand of dish washing soap 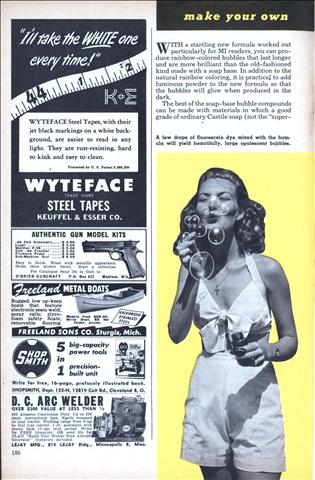 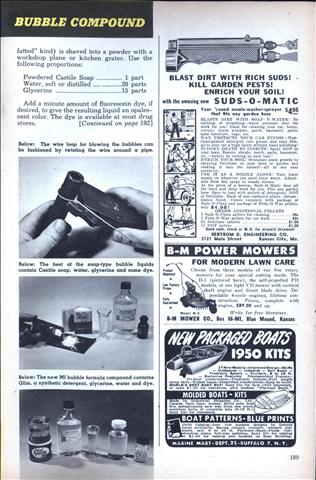 make your own BUBBLE COMPOUND

WITH a startling new formula worked out particularly for MI readers, you can produce rainbow-colored bubbles that last longer and are more brilliant than the old-fashioned kind made with a soap base. In addition to the natural rainbow coloring, it is practical to add luminous powder to the new formula so that the bubbles will glow when produced in the dark. 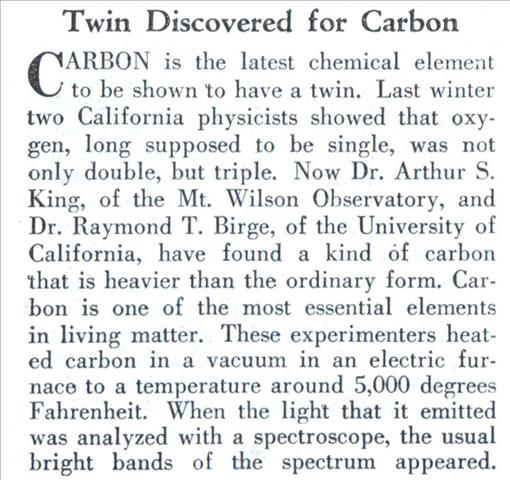 CARBON is the latest chemical element to be shown to have a twin. Last winter two California physicists showed that oxygen, long supposed to be single, was not only double, but triple. Now Dr. Arthur S. King, of the Mt. Wilson Observatory, and Dr. Raymond T. Birge, of the University of California, have found a kind of carbon that is heavier than the ordinary form. Carbon is one of the most essential elements in living matter. These experimenters heated carbon in a vacuum in an electric furnace to a temperature around 5,000 degrees Fahrenheit. When the light that it emitted was analyzed with a spectroscope, the usual bright bands of the spectrum appeared. 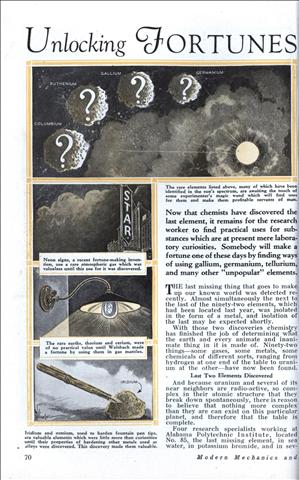 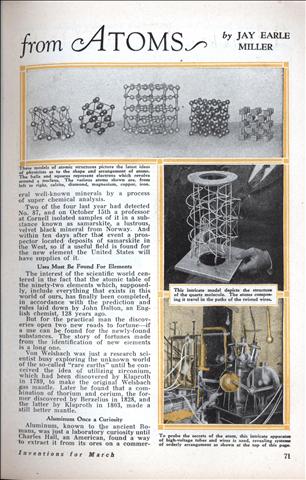 Now that chemists have discovered the last element, it remains for the research worker to find practical uses for substances which are at present mere laboratory curiosities. Somebody will make a fortune one of these days by finding ways of using gallium, germanium, tellurium, and many other “unpopular” elements.

THE last missing thing that goes to make up our known world was detected recently. Almost simultaneously the next to the last of the ninety-two elements, which had been located last year, was isolated in the form of a metal, and isolation of the last may be expected shortly. 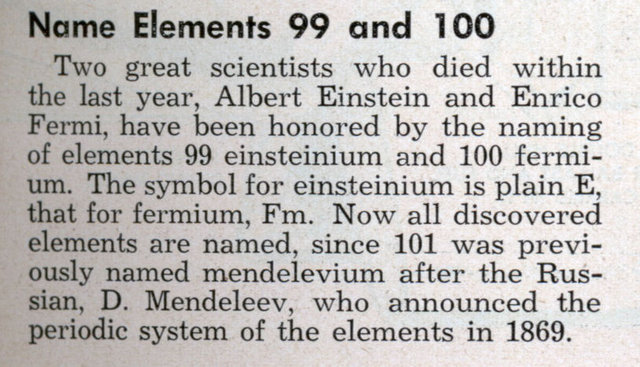 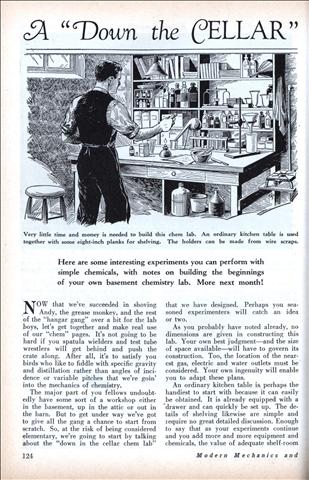 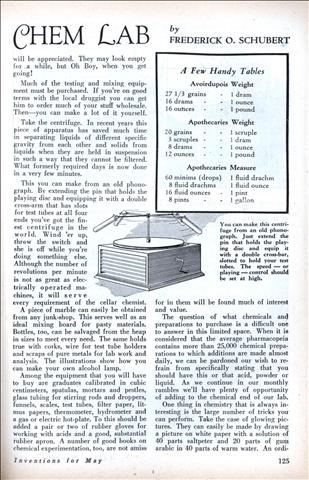 A “Down the CELLAR” Chem Lab

Here are some interesting experiments you can perform with simple chemicals, with notes on building the beginnings of your own basement chemistry lab. More next month!

NOW that we’ve succeeded in shoving Andy, the grease monkey, and the rest of the “hangar gang” over a bit for the lab boys, let’s get together and make real use of our “chem” pages.