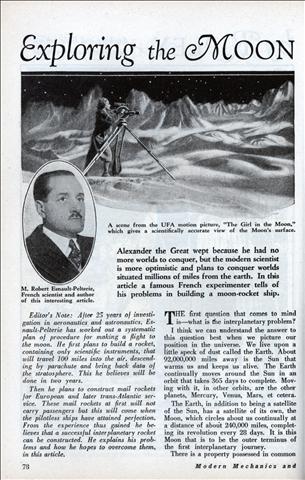 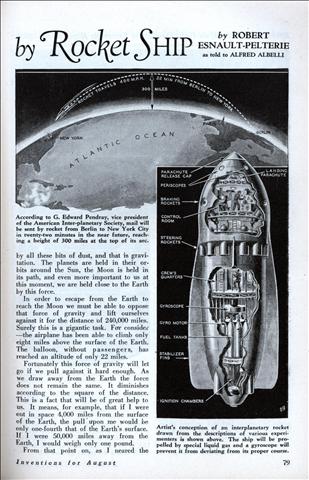 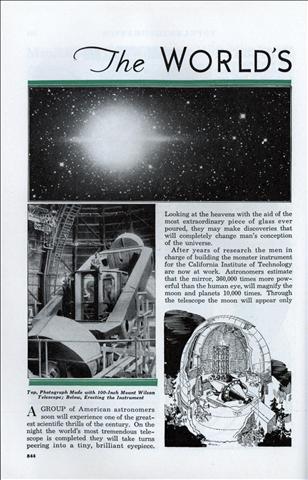 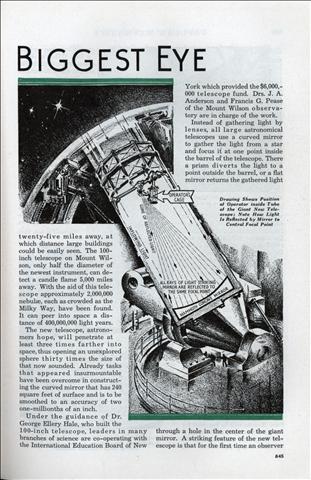 A GROUP of American astronomers soon will experience one of the greatest scientific thrills of the century. On the night the world’s most tremendous telescope is completed they will take turns peering into a tiny, brilliant eyepiece.

Looking at the heavens with the aid of the most extraordinary piece of glass ever poured, they may make discoveries that will completely change man’s conception of the universe.

After years of research the men in charge of building the monster instrument for the California Institute of Technology are now at work. Astronomers estimate that the mirror, 360,000 times more powerful than the human eye, will magnify the moon and planets 10,000 times. 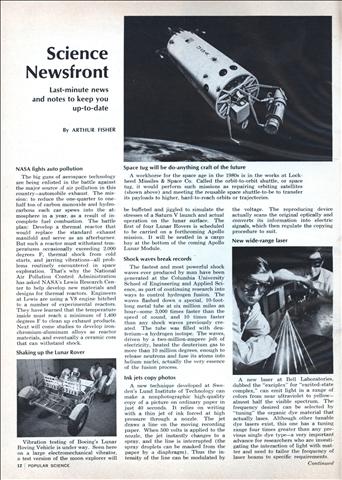 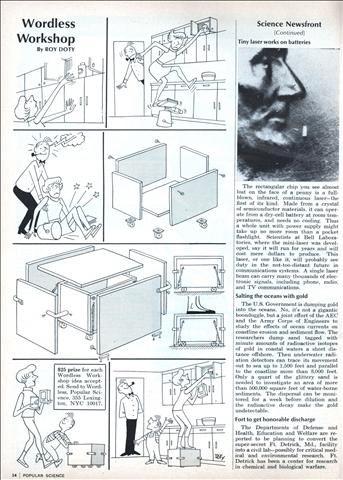 Last-minute news and notes to keep you up-to-date

The big guns of aerospace technology are being enlisted in the battle against the major source of air pollution in this countryâ€”automobile exhaust. The mission: to reduce the one-quarter to one-half ton of carbon monoxide and hydrocarbons each car spews into the atmosphere in a year, as a result of incomplete fuel combustion. The battle plan: Develop a thermal reactor that would replace the standard exhaust manifold and serve as an afterburner. But such a reactor must withstand temperatures occasionally exceeding 2,000 degrees F, thermal shock from cold starts, and jarring vibrationsâ€”all problems routinely encountered in space exploration. 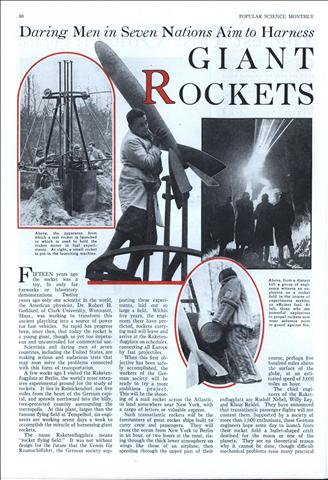 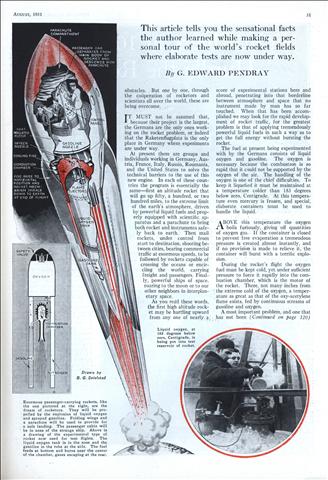 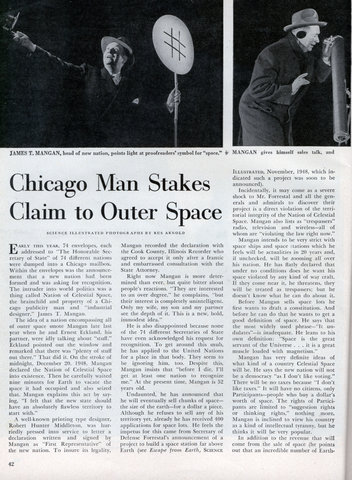 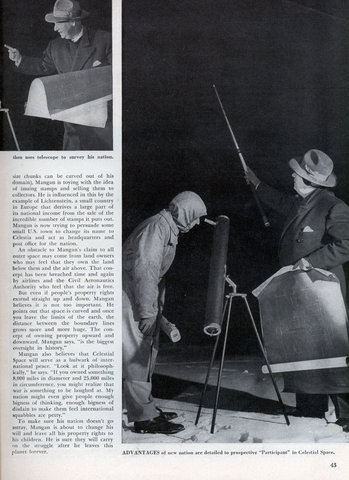 Early this year, 74 envelopes, each addressed to “The Honorable Secretary of State” of 74 different nations were dumped into a Chicago mailbox. Within the envelopes was the announcement that a new nation had been formed and was asking lor recognition. The intruder into world politics was a thing called Nation of Celestial Space, the brainchild and property of a Chicago publicity man and “industrial designer,” James T. Mangan.

The idea of a nation encompassing all of outer space smote Mangan late last year when he and Ernest Eckland, his partner, were idly talking about “stuff.” Eckland pointed out the window and remarked that there was “plenty of stuff out there.” 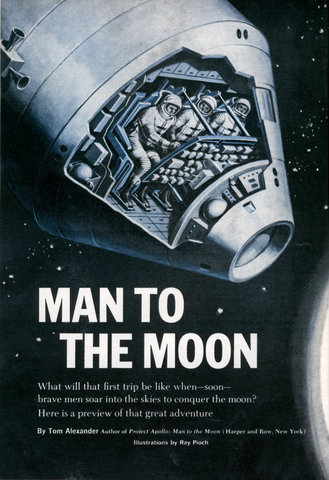 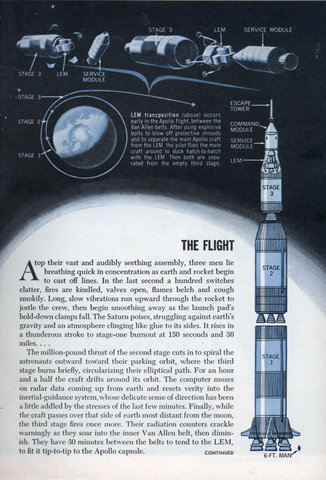 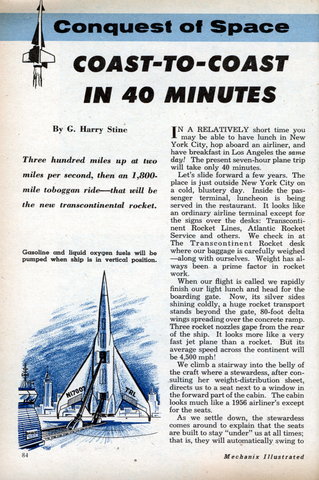 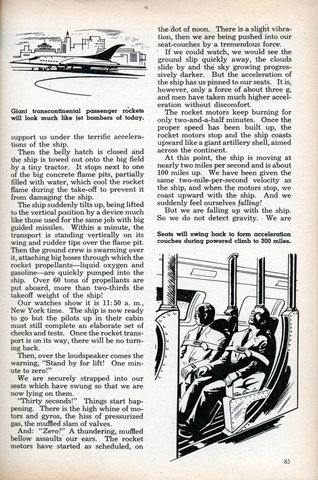 Three hundred miles up at two miles per second, then an 1,800-mile toboggan rideâ€”that will he the new transcontinental rocket.

IN A RELATIVELY short time you may be able to have lunch in New York City, hop aboard an airliner, and have breakfast in Los Angeles the same day! The present seven-hour plane trip will take only 40 minutes.

Let’s slide forward a few years. The place is just outside New York City on a cold, blustery day. Inside the passenger terminal, luncheon is being served in the restaurant. It looks like an ordinary airline terminal except for the signs over the desks: Transcontinent Rocket Lines, Atlantic Rocket Service and others. We check in at The Transcontinent Rocket desk where our baggage is carefully weighed â€”along with ourselves. Weight has always been a prime factor in rocket work. 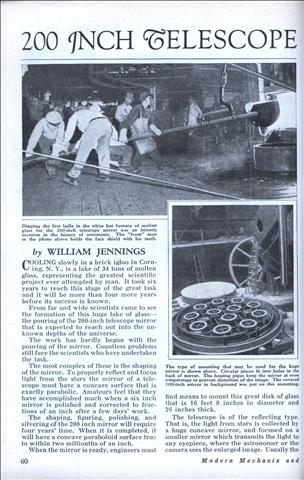 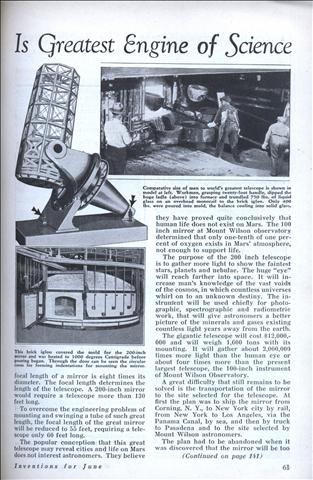 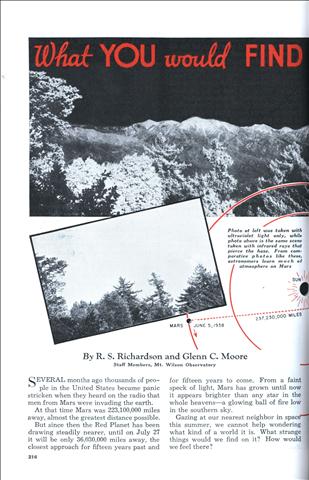 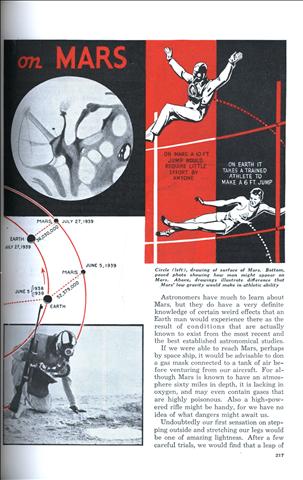 What You would Find on Mars

SEVERAL months ago thousands of people in the United States became panic stricken when they heard on the radio that men from Mars were invading the earth.

At that time Mars was 223,100,000 miles away, almost the greatest distance possible.

But since then the Red Planet has been drawing steadily nearer, until on July 27 it will be only 36,030,000 miles away, the closest approach for fifteen years past and for fifteen years to come. From a faint speck of light, Mars has grown until now it appears brighter than any star in the whole heavensâ€”a glowing ball of fire low in the southern sky.

Gazing at our nearest neighbor in space” this summer, we cannot help wondering what kind of a world it is. What strange things would we find on it? How would we feel there? 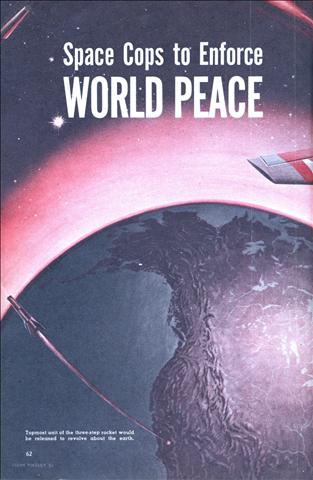 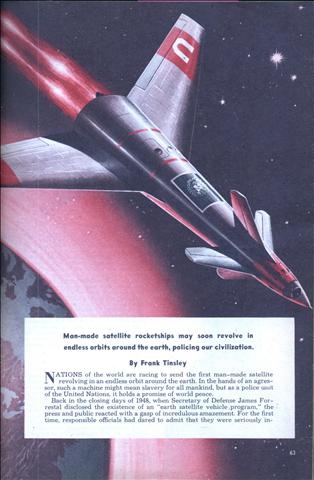 Man-made satellite rocketships may soon revolve in endless orbits around the earth, policing our civilization.

NATIONS of the world are racing to send the first man-made satellite revolving in an endless orbit around the earth. In the hands of an agressor, such a machine might mean slavery for all mankind, but as a police unit of the United Nations, it holds a promise of world peace.

Back in the closing days of 1948, when Secretary of Defense James Forrestal disclosed the existence of an “earth satellite vehicle program,” the press and public reacted with a gasp of incredulous amazement. For the first time, responsible officials had dared to admit that they were seriously investigating the fantastic dreams of Sunday-supplement screwballs!