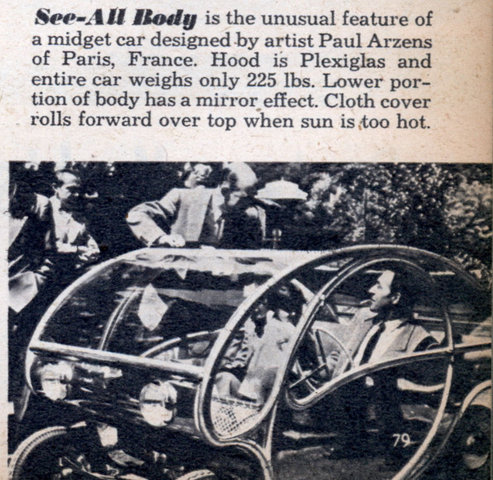 See-All Body is the unusual feature of a midget car designed by artist Paul Arzens of Paris, France. Hood is Plexiglas and entire car weighs only 225 lbs. Lower portion of body has a mirror effect. Cloth cover rolls forward over top when sun is too hot. 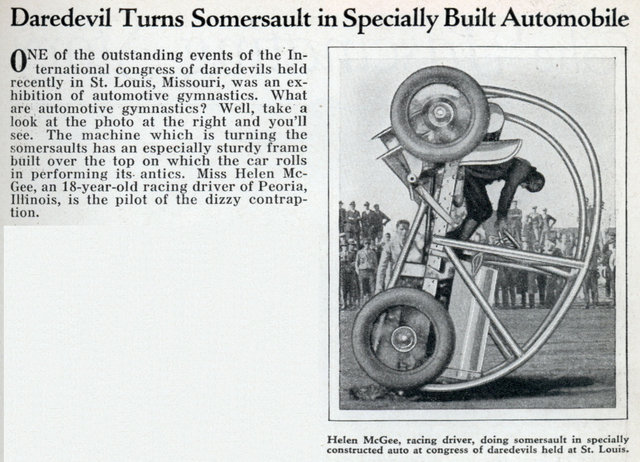 Daredevil Turns Somersault in Specially Built Automobile
ONE of the outstanding events of the International congress of daredevils held recently in St. Louis, Missouri, was an exhibition of automotive gymnastics. What are automotive gymnastics? Well, take a look at the photo at the right and you’ll see. The machine which is turning the somersaults has an especially sturdy frame built over the top on which the car rolls in performing its antics. Miss Helen McGee, an 18-year-old racing driver of Peoria, Illinois, is the pilot of the dizzy contraption. 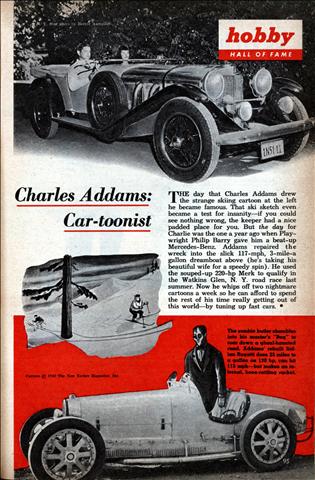 THE day that Charles Addams drew the strange skiing cartoon at the left he became famous. That ski sketch even became a test for insanity—if you could see nothing wrong, the keeper had a nice padded place for you. But the day for Charlie was the one a year ago when Playwright Philip Barry gave him a beat-up Mercedes-Benz. 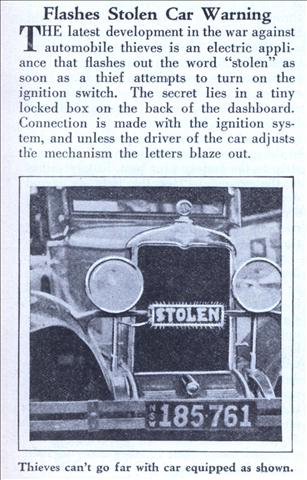 THE latest development in the war against automobile thieves is an electric appliance that flashes out the word “stolen” as soon as a thief attempts to turn on the ignition switch. The secret lies in a tiny locked box on the back of the dashboard. Connection is made with the ignition system, and unless the driver of the car adjusts the mechanism the letters blaze out. 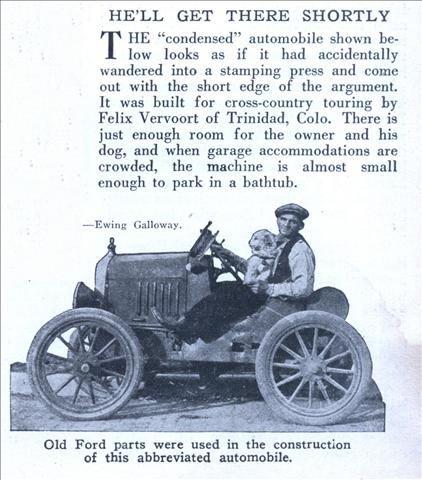 HE’LL GET THERE SHORTLY

THE “condensed” automobile shown below looks as if it had accidentally wandered into a stamping press and come out with the short edge of the argument. It was built for cross-country touring by Felix Vervoort of Trinidad, Colo. There is just enough room for the owner and his dog, and when garage accommodations are crowded, the machine is almost small enough to park in a bathtub. 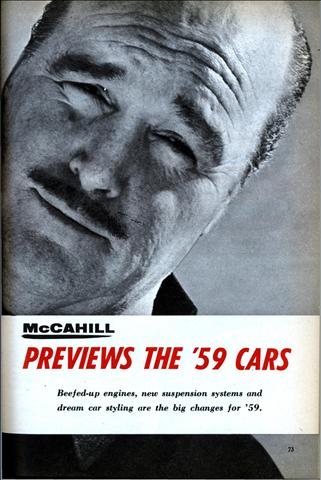 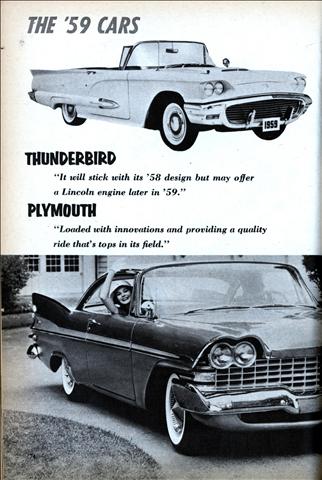 IT’S likely that 1959 will go down in automotive history as the year that automobile manufacturers—hurt by the ’58 sales slump—went all out to whet the appetites of the car-buying public. Beefed-up engines, new suspension systems and dream car styling are just three of the goodies offered with the hope of starting those “low down payments” rolling in once again.

The following is an introduction to the top 1959 cars released as of this date. If they don’t hit you right between the eyes and start you grabbing for your wallet, a lot of Detroit automobile men will be oiling up their squirrel guns and heading for the woods. A guy’s got to eat somehow. 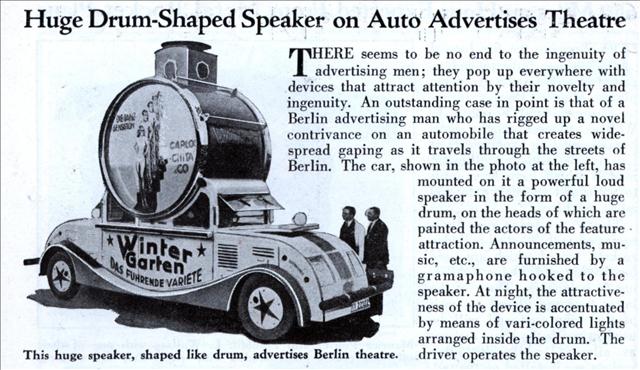 THERE seems to be no end to the ingenuity of advertising men; they pop up everywhere with devices that attract attention by their novelty and ingenuity. An outstanding case in point is that of a Berlin advertising man who has rigged up a novel contrivance on an automobile that creates widespread gaping as it travels through the streets of Berlin. 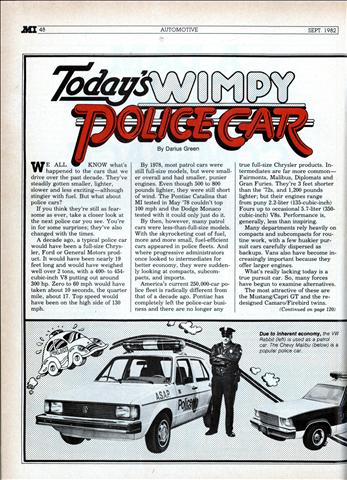 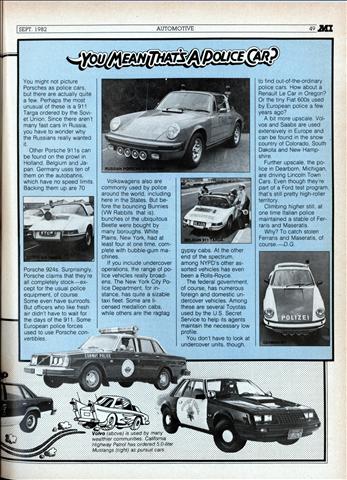 WE ALL KNOW what’s happened to the cars that we drive over the past decade. They’ve steadily gotten smaller, lighter, slower and less exciting—although stingier with fuel. But what about police cars?

If you think they’re still as fearsome as ever, take a closer look at the next police car you see. You’re in for some surprises; they’ve also changed with the times.

A decade ago, a typical police car would have been a full-size Chrysler, Ford or General Motors product. It would have been nearly 19 feet long and would have weighed well over 2 tons, with a 400- to 454-cubic-inch V8 putting out around 300 hp.

IN THESE modern times when motor cars are playing such a prominent part in family life, the children have such an advanced knowledge of the auto that they demand that their toys he correct in every detail. These miniature cars, which were recently displayed at a British automobile show, are equipped with motorcycle engines, pneumatic tires, electric lights, starters, and all other modern accessories. The little fabric coupe pictured here is the first of its kind.

If she drives so fast, why would anyone be tempted to scream “Woman driver” at her? Or did people just scream that every time they saw a woman driving a car? 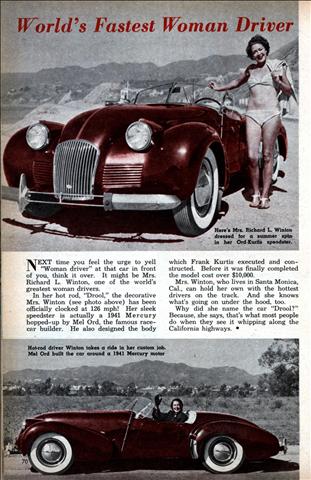 NEXT time you feel the urge to yell “Woman driver” at that car in front of you, think it over. It might be Mrs. Richard L. Winton, one of the world’s greatest woman drivers.

In her hot rod, “Drool,” the decorative Mrs. Winton (see photo above) has been officially clocked at 126 mph! Her sleek speedster is actually a 1941 Mercury hopped-up by Mel Ord, the famous race-car builder. He also designed the body which Frank Kurtis executed and constructed. Before it was finally completed the model cost over $10,000.