Modern Mechanix
Issue: May, 1931
Posted in: Aviation, Impractical, Nautical
No Comments on Bridge of Boats to Guide Trans-Atlantic Air Mail (May, 1931)

Bridge of Boats to Guide Trans-Atlantic Air Mail (May, 1931) 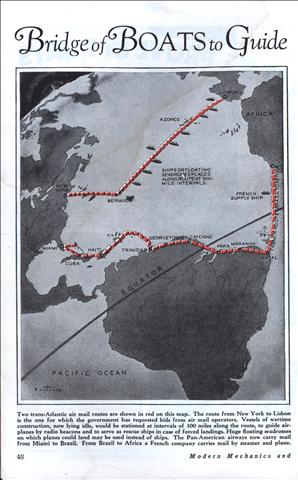 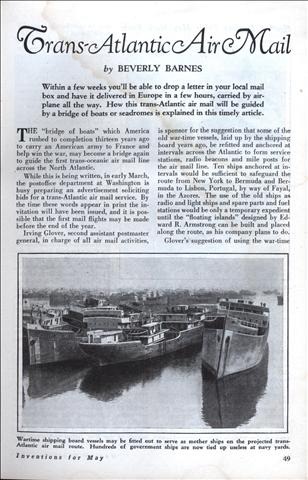 Within a few weeks you’ll be able to drop a letter in your local mail box and have it delivered in Europe in a few hours, carried by airplane all the way. How this trans-Atlantic air mail will be guided by a bridge of boats or seadromes is explained in this timely article.

THE “bridge of boats” which America rushed to completion thirteen years ago to carry an American army to France and help win the war, may become a bridge again to guide the first trans-oceanic air mail line across the North Atlantic. 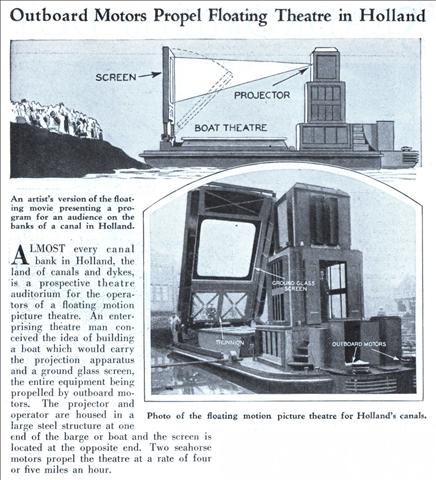 Outboard Motors Propel Floating Theatre in Holland
ALMOST every canal bank in Holland, the land of canals and dykes, is a prospective theatre auditorium for the operators of a floating motion picture theatre. An enterprising theatre man conceived the idea of building a boat which would carry the projection apparatus and a ground glass screen, the entire equipment being propelled by outboard motors. The projector and operator are housed in a large steel structure at one end of the barge or boat and the screen is located at the opposite end. Two seahorse motors propel the theatre at a rate of four or five miles an hour. 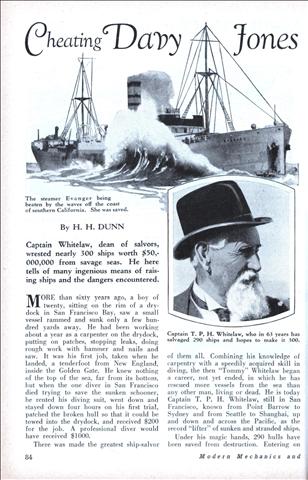 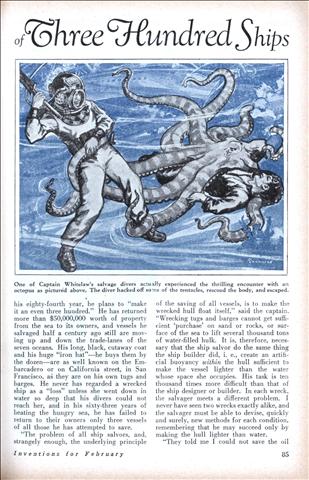 Captain Whitelaw, dean of salvors, wrested nearly 300 ships worth $50, 000,000 from savage seas. He here tells of many ingenious means of raising ships and the dangers encountered.

MORE than sixty years ago, a boy of twenty, sitting on the rim of a dry-dock in San Francisco Bay, saw a small vessel rammed and sunk only a few hundred yards away. He had been working about a year as a carpenter on the drydock, putting on patches, stopping leaks, doing rough work with hammer and nails and saw. 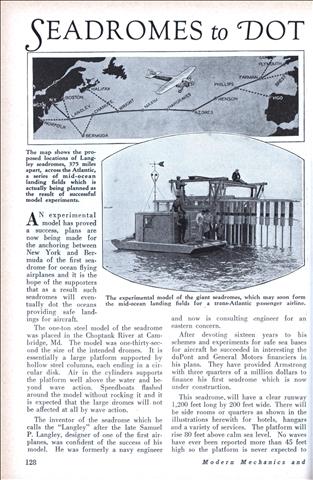 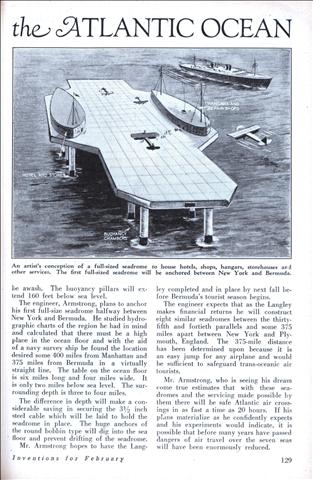 SEADROMES to DOT the ATLANTIC OCEAN

AN experimental model has proved a success, plans are now being made for the anchoring between New York and Bermuda of the first seadrome for ocean flying airplanes and it is the hope of the supporters that as a result such seadromes will eventually dot the oceans providing safe landings for aircraft.

The one-ton steel model of the seadrome was placed in the Choptank River at Cambridge, Md. The model was one-thirty-second the size of the intended dromes.

Aeromarine sounds like a color and that’s a pretty weak name for something that looks like it should be flown by G.I. Joe. I suppose this is reasonable considering that the inventor’s name is Skeets, but I think we can do better.

Maybe something more muscular, like “Car-BO-Plane” (over-hyphenation and making one word ALL CAPS was very popular in these mags). Or maybe something personal like “The Skeeter” or “Skeetsmobile”.

What do you think? 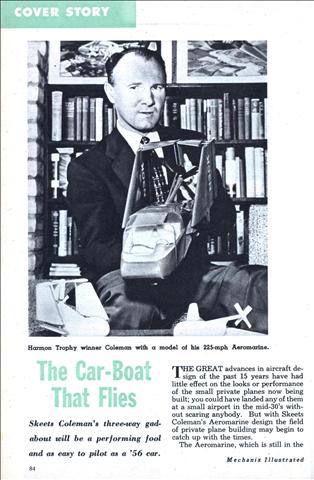 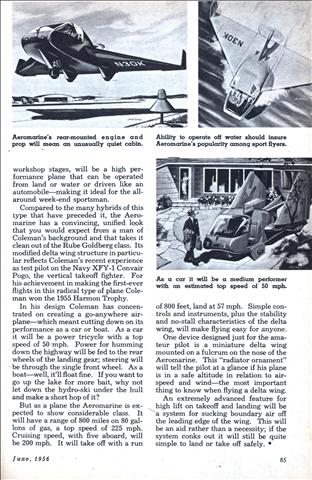 Skeets Coleman’s three-way gadabout will be a performing fool and as easy to pilot as a ’56 car.

THE GREAT advances in aircraft design of the past 15 years have had little effect on the looks or performance of the small private planes now being built; you could have landed any of them at a small airport in the mid-30’s without scaring anybody. But with Skeets Coleman’s Aeromarine design the field of private plane building may begin to catch up with the times. 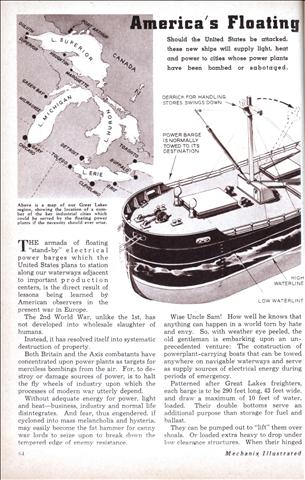 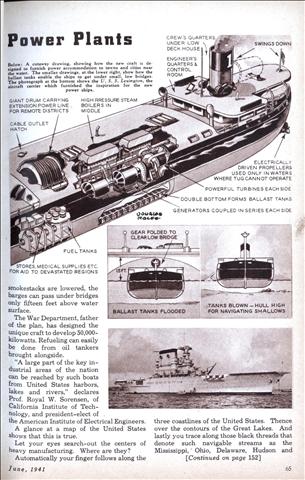 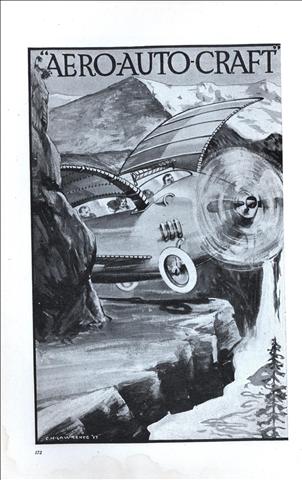 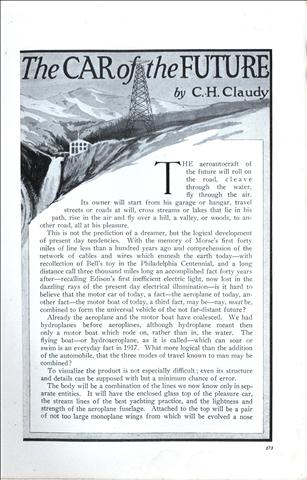 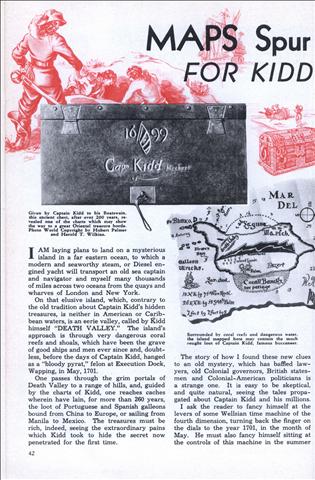 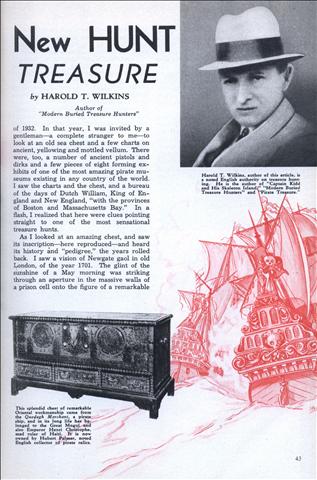 I AM laying plans to land on a mysterious island in a far eastern ocean, to which a modern and seaworthy steam, or Diesel engined yacht will transport an old sea captain and navigator and myself many thousands of miles across two oceans from the quays and wharves of London and New York. 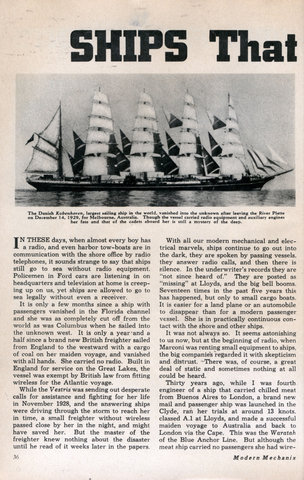 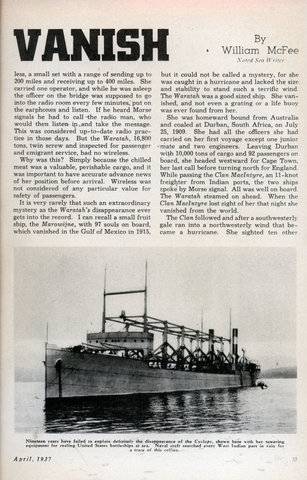 IN THESE days, when almost every boy has a radio, and even harbor tow-boats are in communication with the shore office by radio telephones, it sounds strange to say that ships still go to sea without radio equipment. Policemen in Ford cars are listening in on headquarters and television at home is creeping up on us, yet ships are allowed to go to sea legally without even a receiver. 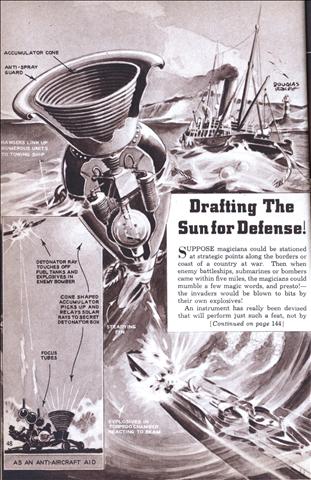 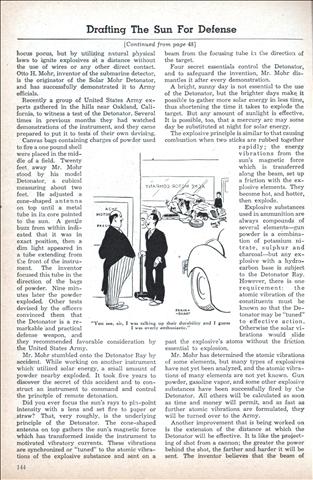 Drafting The Sun for Defense!

SUPPOSE magicians could be stationed at strategic points along the borders or coast of a country at war. Then when enemy battleships, submarines or bombers came within five miles, the magicians could mumble a few magic words, and presto!— the invaders would be blown to bits by their own explosives!