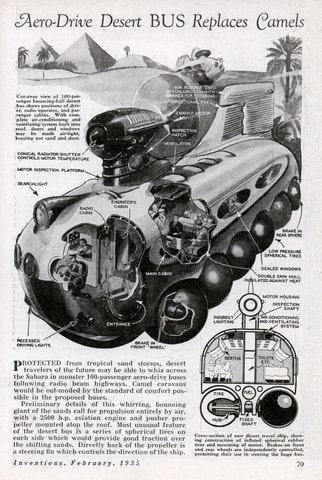 Aero-Drive Desert BUS Replaces Camels
PROTECTED from tropical sand storms, desert travelers of the future may be able to whiz across the Sahara in monster 100-passenger aero-drive buses following radio beam highways. Camel caravans
would be out-moded bythe standard of comfort possible in the proposed buses.
Preliminary details of this whirring, bouncing giant of the sands call for propulsion entirely by air, with a 2500 h.p. aviation engine and pusher propeller mounted atop the roof. Most unusual feature of the desert bus is a series of spherical tires on each side which would provide good traction over the shifting sands. Directly back of the propeller is a steering fin which controls the direction of the ship. 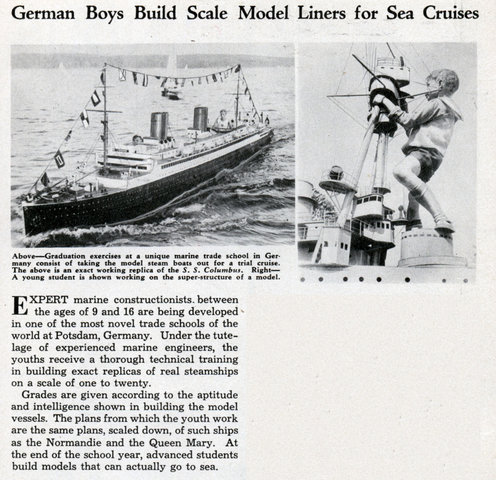 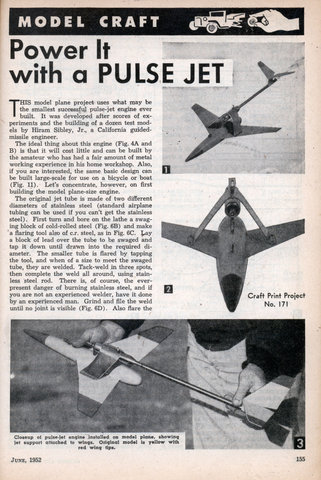 Power It with a PULSE JET

THIS model plane project uses what may be the smallest successful pulse-jet engine ever built. It was developed after scores of experiments and the building of a dozen test models by Hiram Sibley, Jr., a California guided-missile engineer.

Modern Mechanix
Issue: May, 1935
Posted in: Aviation, Impractical
No Comments on Inventors Patent Odd Designs For Safer Planes (May, 1935) 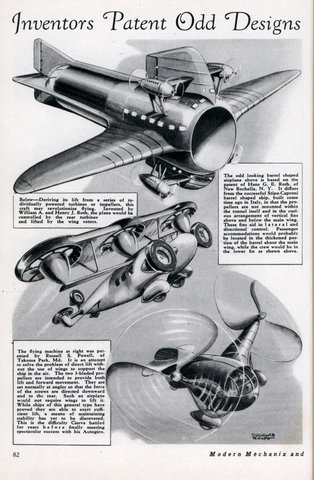 Unusual ships, straying away from accepted designs, are being tried in an effort to increase safety and simplify air travel. Some of thef ideas are shown here!

The odd looking barrel shaped airplane above is based on the patent of Hans G. E. Roth, of New Rochelle. N. Y. It differs from the successful Stipa-Caproni barrel shaped ship, built some time ago in Italy, in that the propellers are not mounted within the tunnel itself and in the curious arrangement of vertical fins above and below the main wing. These fins aid in lateral and directional control. Passenger accommodations would probably be located in the thickened portion of die barrel about the main wing, while die crew would be in the lower fin as shown above. 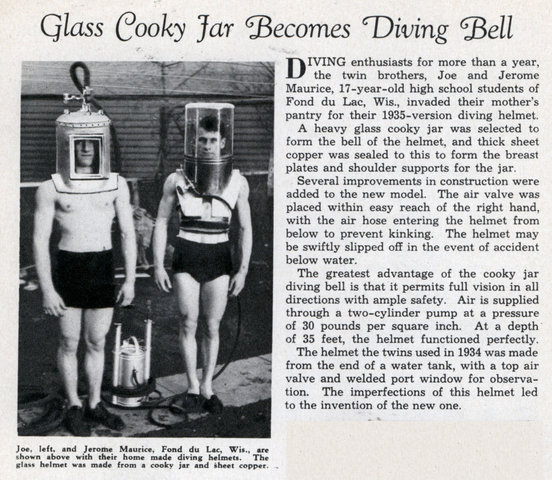 Glass Cooky Jar Becomes Diving Bell
DIVING enthusiasts for more than a year, the twin brothers, Joe and Jerome Maurice, 17-year-old high school students of Fond du Lac, Wis., invaded their mother’s pantry for their 1935-version diving helmet.
A heavy glass cooky jar was selected to form the bell of the helmet, and thick sheet copper was sealed to this to form the breast plates and shoulder supports for the jar.
Several improvements in construction were added to the new model. The air valve was placed within easy reach of the right hand, with the air hose entering the helmet from below to prevent kinking. The helmet may be swiftly slipped off in the event of accident below water.
The greatest advantage of the cooky jar diving bell is that it permits full vision in all directions with ample safety. Air is supplied through a two-cylinder pump at a pressure of 30 pounds per square inch. At a depth of 35 feet, the helmet functioned perfectly.
The helmet the twins used in 1934 was made from the end of a water tank, with a top air valve and welded port window for observation. The imperfections of this helmet led to the invention of the new one.

Cycle Engine Gives 50 m.p.h. Speed to Wheel Chair
A THREE-WHEELED chair built around a motorcycle engine brought Norman Tapper, 23-year-old Californian whose legs have been paralyzed since childhood, to Indianapolis almost a month before the start of the 500-mile auto race. The motorized chair was parked at the gate of the Speedway, to make certain of a good position on the day of the race.
Tapper asserted that this novel wheel chair, which he built himself from motorcycle and automobile parts, reached 50 miles an hour on the long drive from California to Indianapolis. 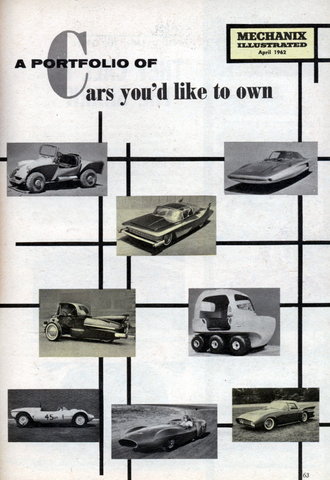 Modern Mechanix
Issue: Sep, 1935
Posted in: Motorcycles
No Comments on Luxury Side Car Is Streamlined (Sep, 1935) 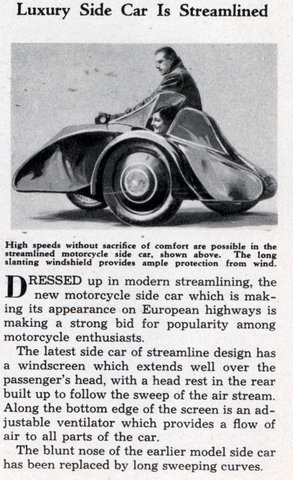 Luxury Side Car Is Streamlined
DRESSED up in modern streamlining, the new motorcycle side car which is making its appearance on European highways is making a strong bid for popularity among motorcycle enthusiasts.
The latest side car of streamline design has a windscreen which extends well over the passenger’s head, with a head rest in the rear built up to follow the sweep of the air stream. Along the bottom edge of the screen is an adjustable ventilator which provides a flow of air to all parts of the car.
The blunt nose of the earlier model side car has been replaced by long sweeping curves. 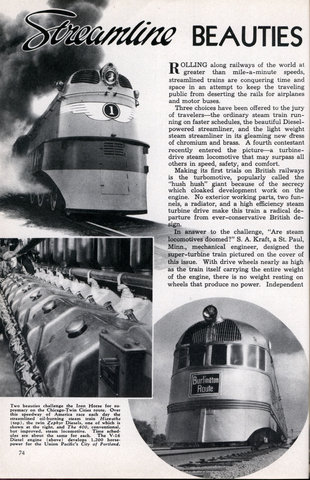 ROLLING along railways of the world at greater than mile-a-minute speeds, streamlined trains are conquering time and space in an attempt to keep the traveling public from deserting the rails for airplanes and motor buses.

Three choices have been offered to the jury of travelersâ€”the ordinary steam train running on faster schedules, the beautiful Diesel-powered streamliner, and the light weight steam streamliner in its gleaming new dress of chromium and brass. A fourth contestant recently entered the pictureâ€”a turbine-drive steam locomotive that may surpass all others in speed, safety, and comfort.

Motor Unicycle Proves Fast, Safe
A SPECTACULAR demonstration of unicycle operation was given in Los Angeles recently when Walter Nilsson, California inventor, drove his specially constructed machine 18 miles per hour in second gear without the aid of a pneumatic tire.
His unicycle consists of a single outer wheel driven by an inner wheel held in a stationary frame and powered by a one-cylinder motor. The engine is mounted motorcycle fashion between the rider’s legs. Steering is accomplished by means of a secret device which tilts the outer wheel while permitting the rider to remain upright.
With the arrival of a pneumatic tire, Nilsson expects to be able to attain 100 miles per hour.