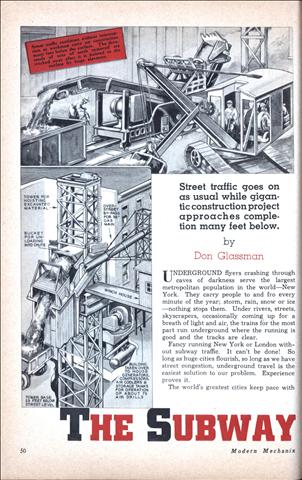 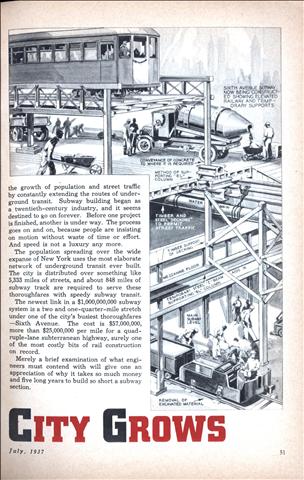 Mechanix Illustrated
Issue: Jun, 1955
Posted in: Automotive, Trains
10 Comments on TAKE YOUR CAR WITH YOU ON THE TRAIN (Jun, 1955) 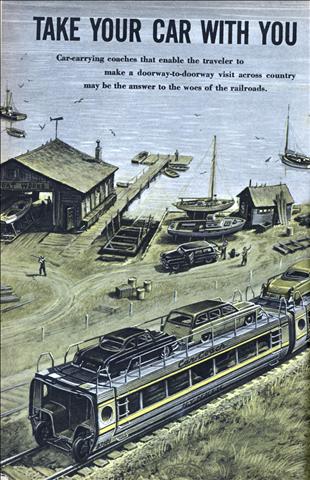 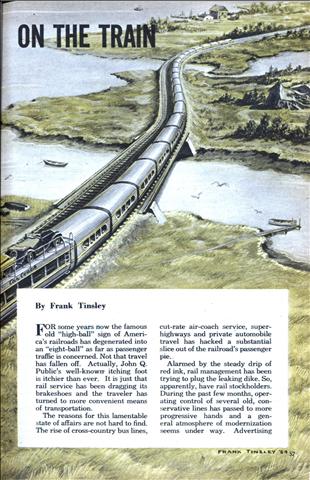 TAKE YOUR CAR WITH YOU ON THE TRAIN

Car-carrying coaches that enable the traveler to make a doorway-to-doorway visit across country may be the answer to the woes of the railroads.

FOR some years now the famous old “high-ball” sign of America’s railroads has degenerated into an “eight-ball” as far as passenger traffic is concerned. Not that travel has fallen off. Actually, John Q. Public’s well-known itching foot is itchier than ever. It is just that rail service has been dragging its brakeshoes and the traveler has turned to more convenient means of transportation. 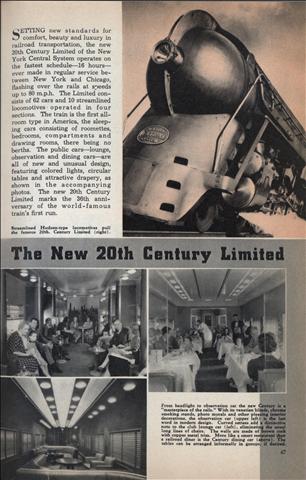 The New 20th Century Limited
JETTING new standards for comfort, beauty and luxury in railroad transportation, the new 20th Century Limited of the New York Central System operates on the fastest schedule—16 hours— ever made in regular service between New York and Chicago, flashing over the rails at speeds up to 80 m.p.h. The Limited consists of 62 cars and 10 streamlined locomotives operated in four sections. 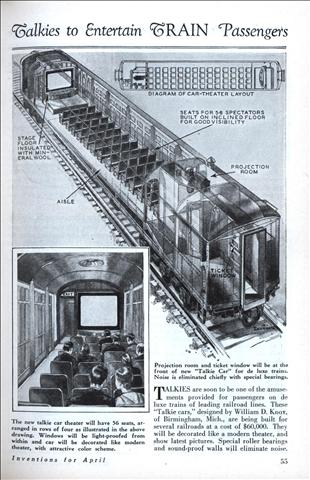 Talkies to Entertain TRAIN Passengers
TALKIES are soon to be one of the amusements provided for passengers on de luxe trains of leading railroad lines. These “Talkie cars,” designed by William D. Knox, of Birmingham, Mich., are being built for several railroads at a cost of $60,000. They will be decorated like a modern theater, and show latest pictures. Special roller bearings and sound-proof walls will eliminate noise.

Unfortunately it would run out of fuel in about a minute. 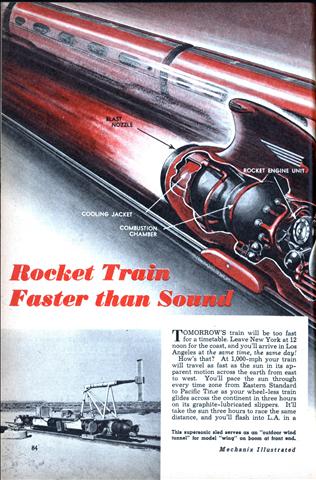 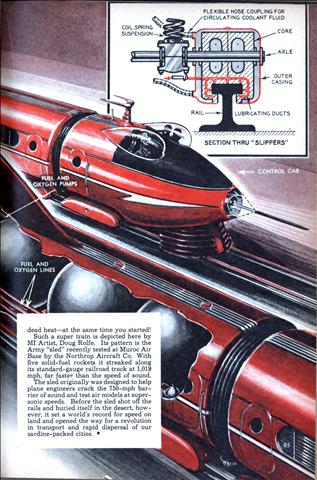 TOMORROW’S train will be too fast for a timetable. Leave New York at 12 noon for the coast, and you’ll arrive in Los Angeles at the same time, the same day!

How’s that? At 1,000-mph your train will travel as fast as the sun in its apparent motion across the earth from east to west. You’ll pace the sun through every time zone from Eastern Standard to Pacific Time as your wheel-less train glides across the continent in three hours on its graphite-lubricated slippers. It’ll take the sun three hours to race the same distance, and you’ll flash into L.A. in a dead heat—at the same time you started! 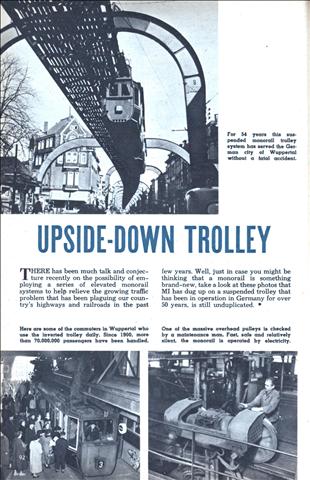 UPSIDE-DOWN TROLLEY
THERE has been much talk and conjecture recently on the possibility of employing a series of elevated monorail systems to help relieve the growing traffic problem that has been plaguing our country’s highways and railroads in the past few years. Well, just in case you might be thinking that a monorail is something brand-new, take a look at these photos that MI has dug up on a suspended trolley that has been in operation in Germany for over 50 years, is still unduplicated. 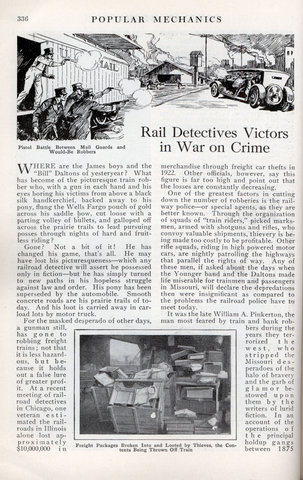 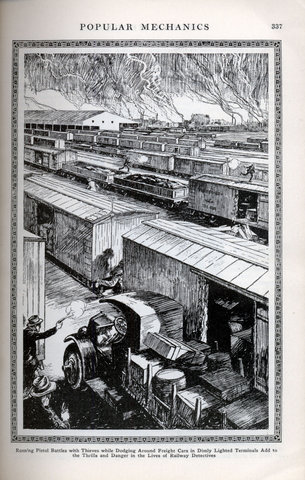 WHERE are the James boys and the “Bill” Daltons of yesteryear? What has become of the picturesque train robber who, with a gun in each hand and his eyes boring his victims from above a black silk handkerchief, backed away to his pony, Hung the Wells Fargo pouch of gold across his saddle bow, cut loose with a parting volley of bullets, and galloped off across the prairie trails to lead pursuing posses through nights of hard and fruitless riding? 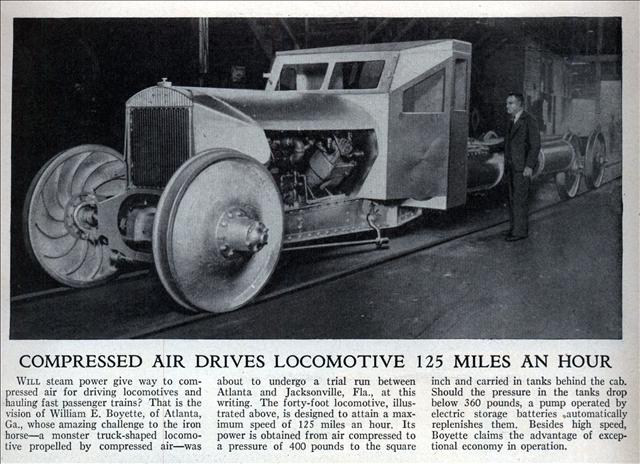 Will steam power give way to compressed air for driving locomotives and hauling fast passenger trains? That is the vision of William E. Boyette, of Atlanta, Ga., whose amazing challenge to the iron horse—a monster truck-shaped locomotive propelled by compressed air—was about to undergo a trial run between Atlanta and Jacksonville, Fla., at this writing. 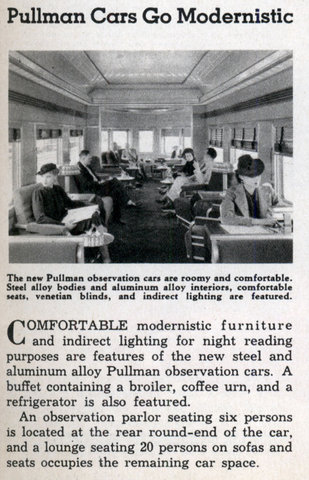 COMFORTABLE modernistic furniture and indirect lighting for night reading purposes are features of the new steel and aluminum alloy Pullman observation cars. A buffet containing a broiler, coffee urn, and a refrigerator is also featured.

An observation parlor seating six persons is located at the rear round-end of the car, and a lounge seating 20 persons on sofas and seats occupies the remaining car space. 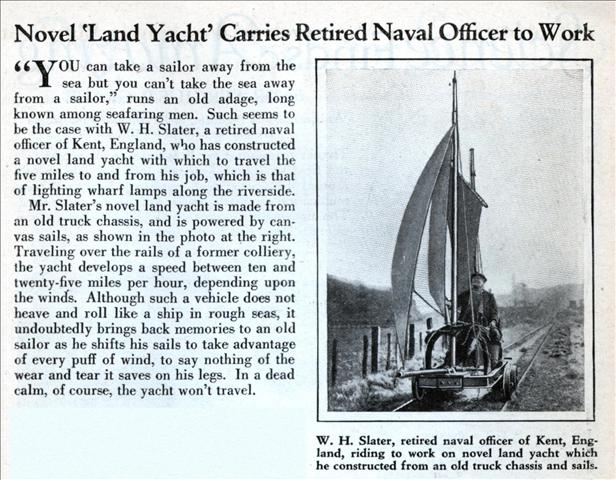 “YOU can take a sailor away from the sea but you can’t take the sea away from a sailor,” runs an old adage, long known among seafaring men. Such seems to be the case with W. H. Slater, a retired naval officer of Kent, England, who has constructed a novel land yacht with which to travel the five miles to and from his job, which is that of lighting wharf lamps along the riverside.