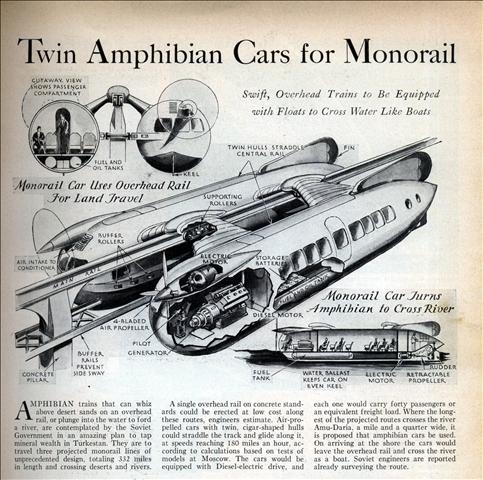 Swift, Overhead Trams to Be “Equipped with Floats to Cross Water Like Boats AMPHIBIAN trains that can whiz above desert sands on an overhead rail, or plunge into the water to ford a river, are contemplated by the Soviet Government in an amazing plan to tap mineral wealth in Turkestan. They are to travel three projected monorail lines of unprecedented design, totaling 332 miles in length and crossing deserts and rivers.

Wow, I had no idea this existed, it reminds me of the system they have at Disney World. It seems like a really useful idea for a big city. Apparently it went under, so to speak, in 1959. 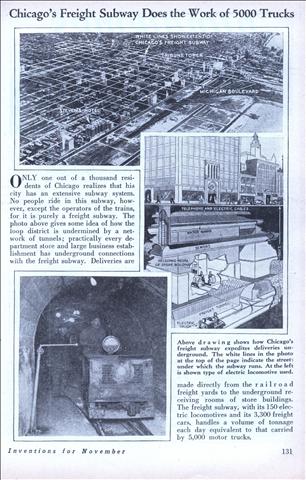 Chicago’s Freight Subway Does the Work of 5000 Trucks

ONLY one out of a thousand residents of Chicago realizes that his city has an extensive subway system. No people ride in this subway, however, except the operators of the trains, for it is purely a freight subway. The photo above gives some idea of how the loop district is undermined by a network of tunnels; practically every department store and large business establishment has underground connections with the freight subway.

It may be impossible, but, damn is it cool looking! 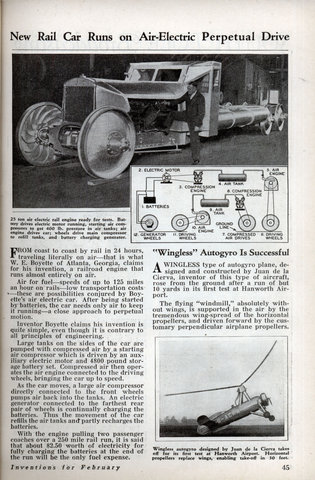 FROM coast to coast by rail in 24 hours, traveling literally on airâ€”that is what W. E. Boyette of Atlanta, Georgia, claims for his invention, a railroad engine that runs almost entirely on air.

Air for fuelâ€”speeds of up to 125 miles an hour on railsâ€”low transportation costs-â€”these are possibilities conjured by Boyette’s air electric car. After being started by batteries, the car needs only air to keep it runningâ€”a close approach to perpetual motion. 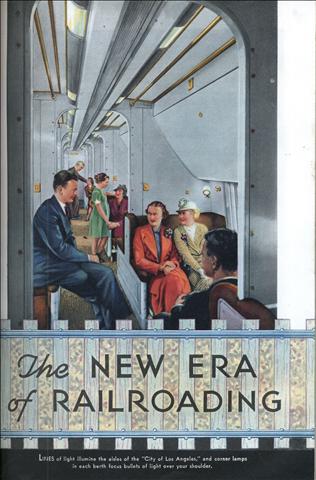 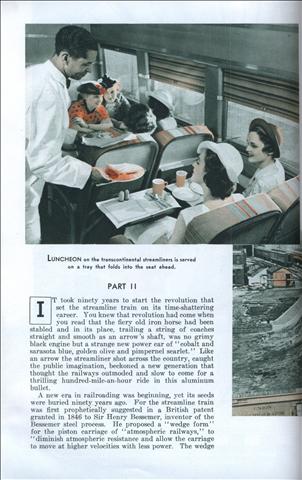 The NEW ERA of RAILROADING

IT took ninety years to start the revolution that set the streamline train on its time-shattering career. You knew that revolution had come when you read that the fiery old iron horse had been stabled and in its place, trailing a string of coaches straight and smooth as an arrow’s shaft, was no grimy black engine but a strange new power car of “cobalt and sarasota blue, golden olive and pimpernel scarlet.” Like an arrow the streamliner shot across the country, caught the public imagination, beckoned a new generation that thought the railways outmoded and slow to come for a thrilling hundred-mile-an-hour ride in this aluminum bullet. 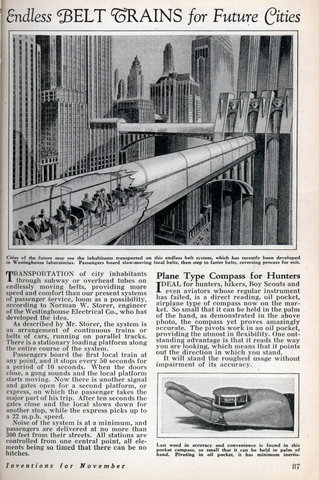 TRANSPORTATION of city inhabitants through subway or overhead tubes on endlessly moving belts, providing more speed and comfort than our present systems of passenger service, loom as a possibility, according to Norman W. Storer, engineer of the Westinghouse Electrical Co., who has developed the idea.

As described by Mr. Storer, the system is an arrangement of continuous trains or belts of cars, running on parallel tracks. There is a stationary loading platform along the entire course of the system. 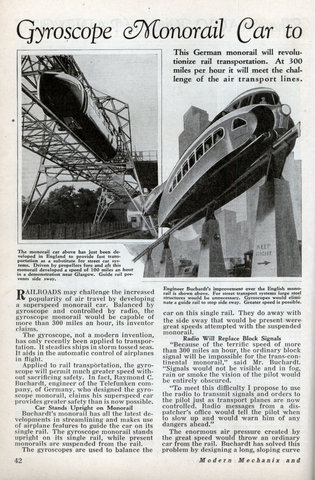 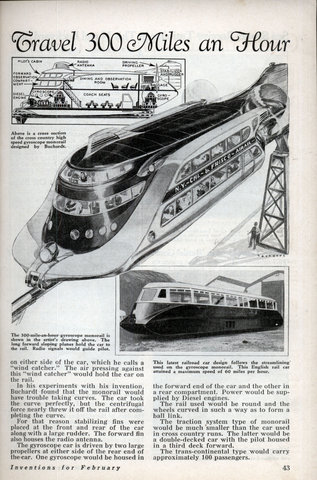 This German monorail will revolutionize rail transportation. At 300 miles per hour it will meet the challenge of the air transport lines.

RAILROADS may challenge the increased popularity of air travel by developing a superspeed monorail car. Balanced by gyroscope and controlled by radio, the gyroscope monorail would be capable of more than 300 miles an hour, its inventor claims. 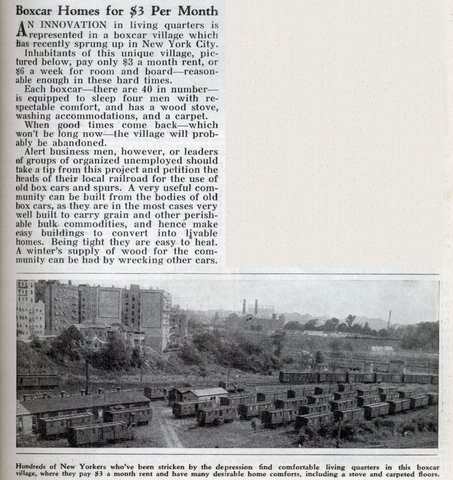 Boxcar Homes for $3 Per Month

AN INNOVATION in living quarters is represented in a boxcar village which has recently sprung up in New York City.

Inhabitants of this unique village, pictured below, pay only $3 a month rent, or $6 a week for room and boardâ€”reasonable enough in these hard times. 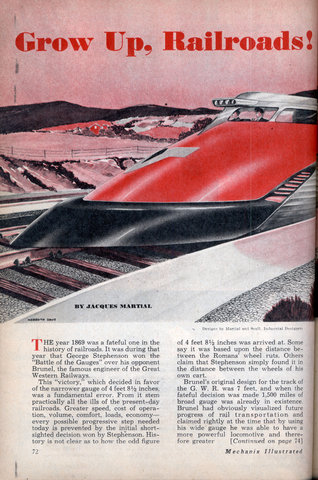 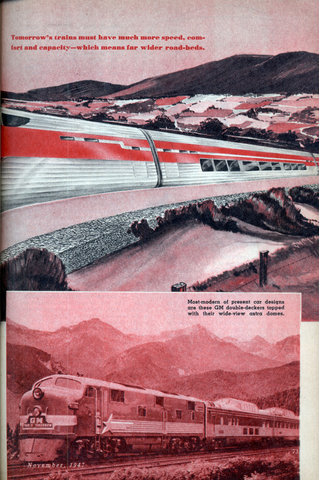 THE year 1869 was a fateful one in the history of railroads. It was during that year that George Stephenson won the “Battle of the Gauges” over his opponent Brunei, the famous engineer of the Great. Western Railways.

This “victory,” which decided in favor of the narrower gauge of 4 feet 8-1/2 inches, was a fundamental error. From it stem practically all the ills of the present-day railroads. Greater speed, cost of operation, volume, comfort, loads, economyâ€” every possible progressive step needed today is prevented by the initial shortsighted decision won by Stephenson. History is not clear as to how the odd figure of 4 feet 8-1/2 inches was arrived at. Some say it was based upon the distance beteen the Romans’ wheel ruts. Others claim that Stephenson simply found it in the distance between the wheels of his own cart. 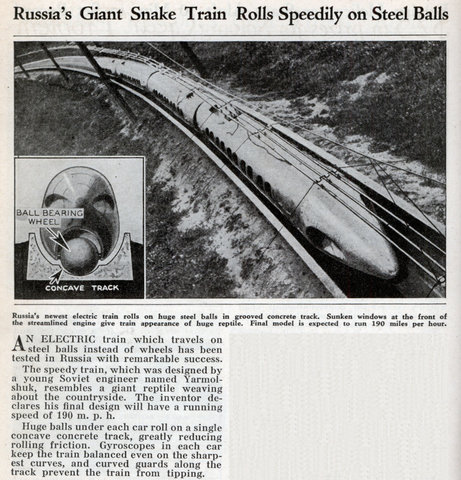 AN ELECTRIC train which travels on steel balls instead of wheels has been tested in Russia with remarkable success.

The speedy train, which was designed by a young Soviet engineer named Yarmolshuk, resembles a giant reptile weaving about the countryside. The inventor declares his final design will have a running speed of 190 m. p. h.

Huge balls under each car roll on a single concave concrete track, greatly reducing rolling friction. Gyroscopes in each car keep the train balanced even on the sharpest curves, and curved guards along the track prevent the train from tipping. 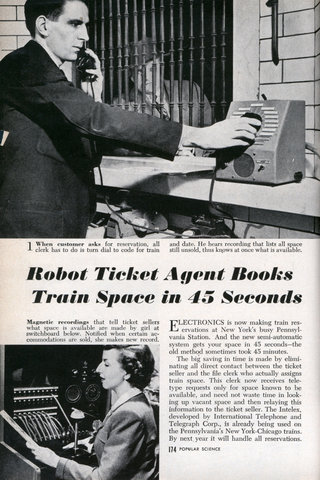 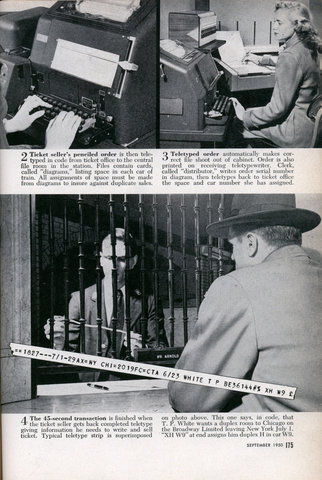 The big saving in time is made by eliminating all direct contact between the ticket seller and the file clerk who actually assigns train space. This clerk now receives teletype requests only for space known to be available, and need not waste time in looking up vacant space and then relaying this information to the ticket seller. The Intelex, developed by International Telephone and Telegraph Corp., is already being used on the Pennsylvania’s New York-Chicago trains. By next year it will handle all reservations.