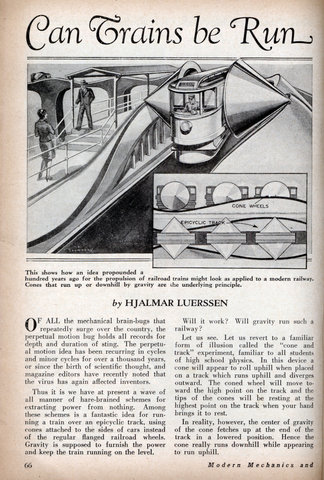 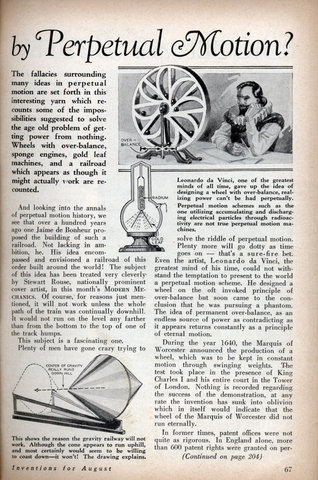 Can Trains be Run by Perpetual Motion

The fallacies surrounding many ideas in perpetual motion are set forth in this interesting yarn which recounts some of the impossibilities suggested to solve the age old problem of getting power from nothing. Wheels with over-balance, sponge engines, gold leaf machines, and a railroad which appears as though it might actually work are recounted.

OF ALL the mechanical brain-bugs that repeatedly surge over the country, the perpetual motion bug holds all records for depth and duration of sting. The perpetual motion idea has been recurring in cycles and minor cycles for over a thousand years, or since the birth of scientific thought, and magazine editors have recently noted that the virus has again affected inventors. 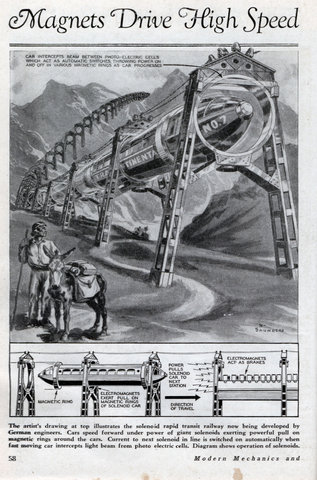 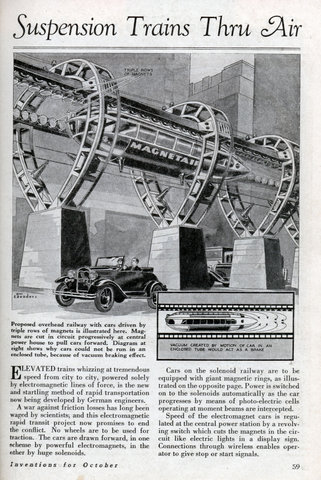 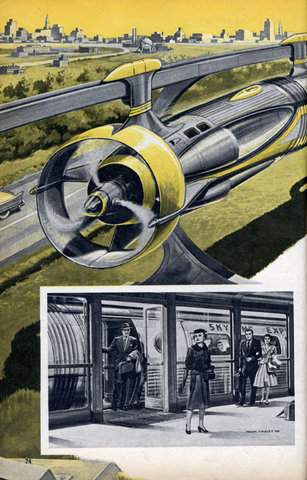 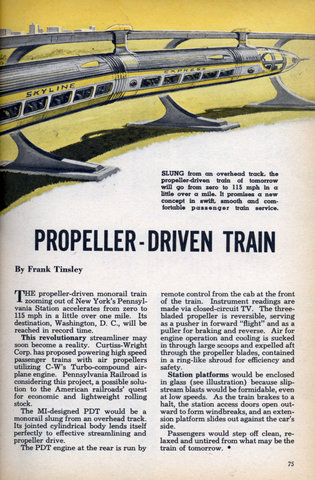 THE propeller-driven monorail train zooming out of New York’s Pennsylvania Station accelerates from zero to 115 mph in a little over one mile. Its destination, Washington, D. C, will be reached in record time. 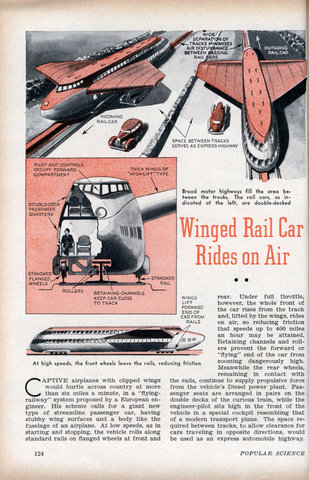 Winged Rail Car Rides on Air
CAPTIVE airplanes with clipped wings would hurtle across country at more than six miles a minute, in a “flying-railway” system proposed by a European engineer. His scheme calls for a giant new type of streamline passenger car, having stubby wing surfaces and a body like the fuselage of an airplane. At low speeds, as in starting and stopping, the vehicle rolls along standard rails on flanged wheels at front and rear. 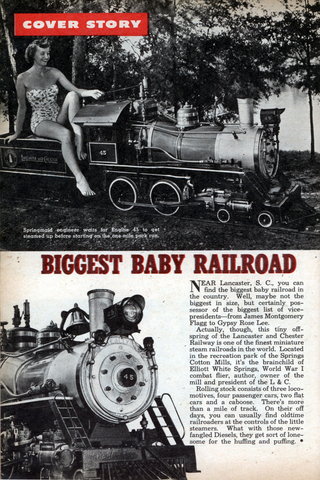 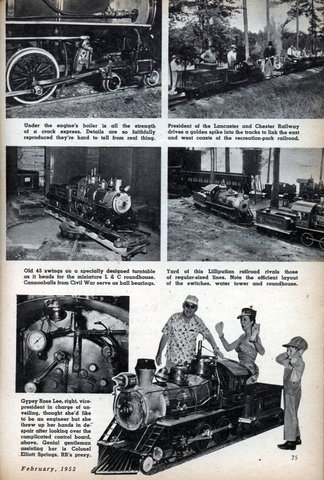 NEAR Lancaster, S. C, you can find the biggest baby railroad in the country. Well, maybe not the biggest in size, but certainly possessor of the biggest list of vice-presidentsâ€”from James Montgomery Flagg to Gypsy Rose Lee.

Actually, though, this tiny offspring of the Lancaster and Chester Railway is one of the finest miniature steam railroads in the world. Located in the recreation park of the Springs Cotton Mills, it’s the brainchild of Elliott White Springs, World War I combat flier, author, owner of the mill and president of the L & C. 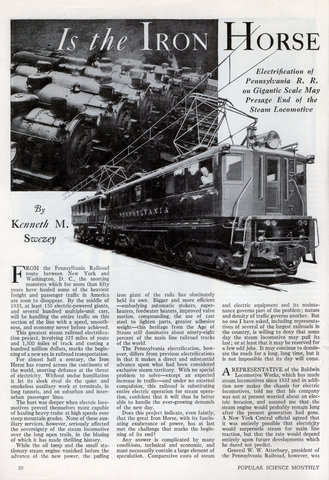 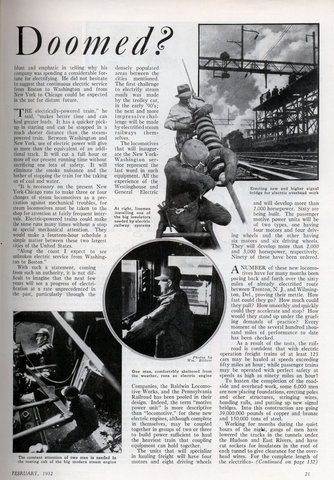 Is the Iron Horse Doomed?

Electrification of Pennsylvania R.R. on Gigantic Scale May Presage End of the Steam Locomotive

FROM the Pennsylvania Railroad route between New York and Washington, D. C, the snorting monsters which for more than fifty years have hauled some of the heaviest freight and passenger traffic in America are soon to disappear. By the middle of 1933, at least 150 electric-powered giants, and several hundred multiple-unit cars, will be handling the entire traffic on this section of the line with a speed, smoothness, and economy never before achieved. This greatest steam railroad electrification project, involving 325 miles of route and 1,300 miles of track and costing a hundred million dollars, marks the beginning of a new era in railroad transportation. For almost half a century, the Iron Horse has roared across the continents of the world, snorting defiance at the threat of electricity. Without undue humiliation it let its sleek rival do the quiet and smokeless auxiliary work at terminals, in long tunnels, and on suburban and inter-urban passenger lines. 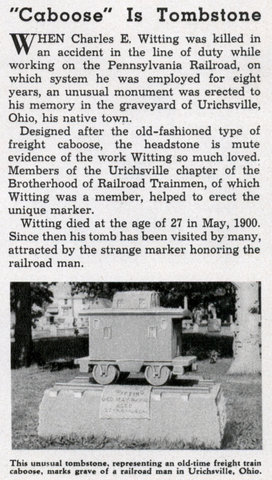 WHEN Charles E. Witting was killed in an accident in the line of duty while working on the Pennsylvania Railroad, on which system he was employed for eight years, an unusual monument was erected to his memory in the graveyard of Urichsville, Ohio, his native town.

Designed after the old-fashioned type of freight caboose, the headstone is mute evidence of the work Witting so much loved. Members of the Urichsville chapter of the Brotherhood of Railroad Trainmen, of which Witting was a member, helped to erect the unique marker. 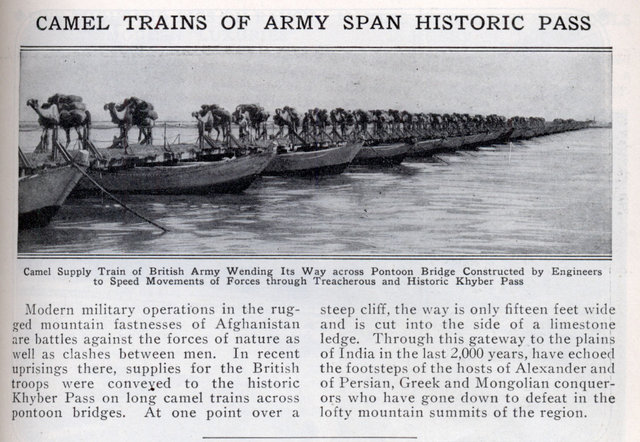 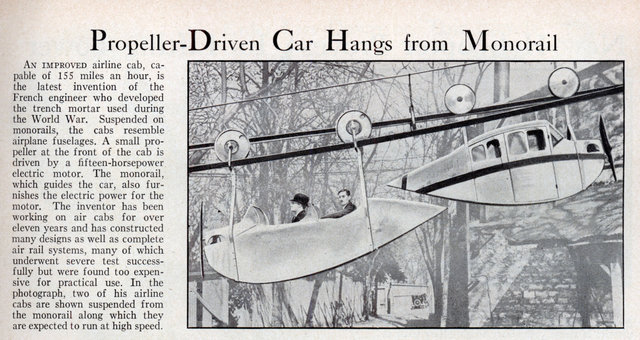 An improved airline cab, capable of 155 miles an hour, is the latest invention of the French engineer who developed the trench mortar used during the World War. Suspended on monorails, the cabs resemble airplane fuselages. A small propeller at the front of the cab is driven by a fifteen-horsepower electric motor.

I can’t imagine why these didn’t take off. That monorail train looks utterly stable to me! Not to mention the plane stabilized by a pendulum. 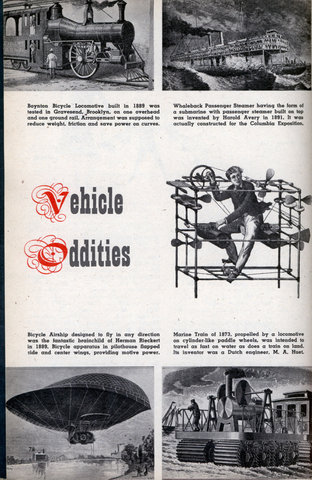 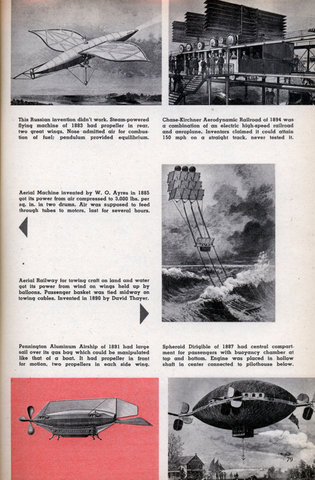 Boynton Bicycle Locomotive built in 1889 was tested in Gravesend, Brooklyn, on one overhead and one ground rail. Arrangement was supposed to reduce weight, friction and save power on curves.

Bicycle Airship designed to fly in any direction was the fantastic brainchild of Herman Rieckert in 1889. Bicycle apparatus in pilothouse flapped side and center wings, providing motive power.