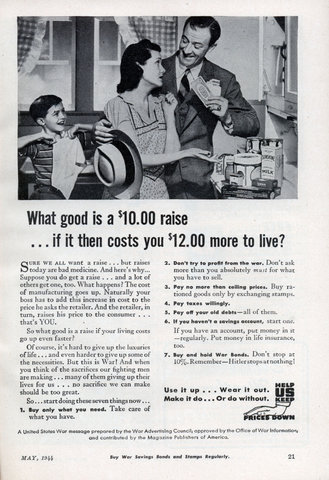 Sure WE all want a raise . . . but raises today are bad medicine. And here’s why… Suppose you do get a raise . . . and a lot of others get one, too. What happens? The cost of manufacturing goes up. Naturally your boss has to add this increase in cost to the price he asks the retailer. And the retailer, in turn, raises his price to the consumer… that’s YOU.

So what good is a raise if your living costs go up even faster? 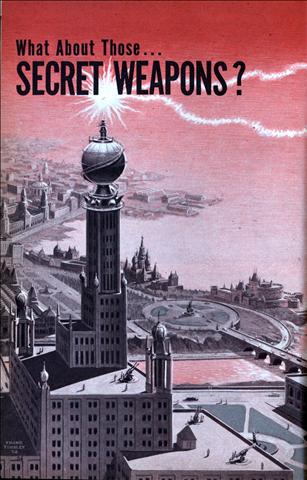 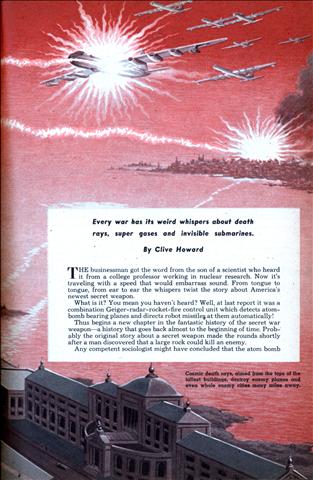 What About Those… SECRET WEAPONS?

Every war has its weird whispers about death rays, super gases and invisible submarines.

THE businessman got the word from the son of a scientist who heard it from a college professor working in nuclear research. Now it’s traveling with a speed that would embarrass sound. From tongue to tongue, from ear to ear the whispers twist the story about America’s newest secret weapon.

What is it? You mean you haven’t heard? Well, at last report it was a combination Geiger-radar-rocket-fire control unit which detects atom-bomb bearing planes and directs robot missiles, at them automatically!

Thus begins a new chapter in the fantastic history of the secret war weaponâ€”a history that goes back almost to the beginning of time. Probably the original story about a secret weapon made the rounds shortly after a man discovered that a large rock could kill an enemy. 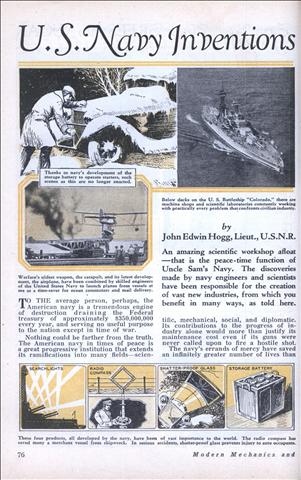 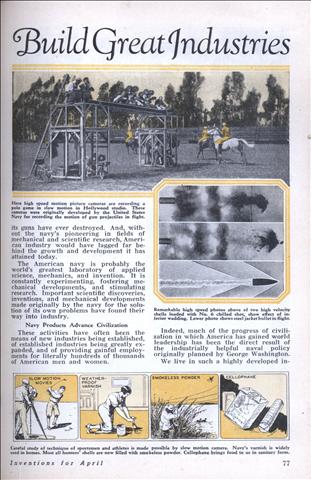 An amazing scientific workshop afloat â€”that is the peace-time function of Uncle Sam’s Navy. The discoveries made by navy engineers and scientists have been responsible for the creation of vast new industries, from which you benefit in many ways, as told here.

TO THE average person, perhaps, the American navy is a tremendous engine of destruction draining the Federal treasury of approximately $350,000,000 every year, and serving no useful purpose to the nation except in time of ‘war.

Nothing could be farther from the truth. The American navy in times of peace is a great progressive institution that extends its ramifications into many fieldsâ€”scientific, mechanical, social, and diplomatic. 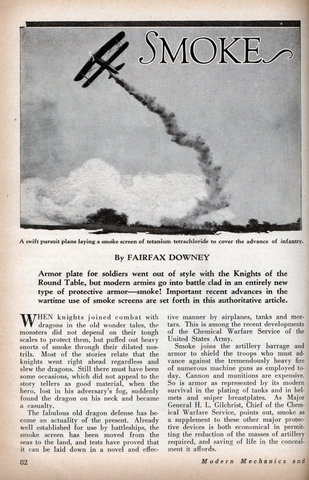 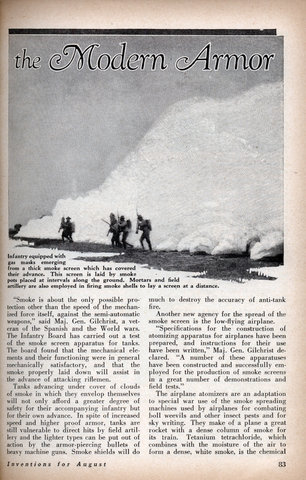 Armor plate for soldiers went out of style with the Knights of the Round Table, but modern armies go into battle clad in an entirely new type of protective armorâ€”smoke! Important recent advances in the wartime use of smoke screens are set forth in this authoritative article.

WHEN knights joined combat with dragons in the old wonder tales, the monsters did not depend on their tough scales to protect them, but puffed out heavy snorts of smoke through their dilated nostrils. Most of the stories relate that the knights went right ahead regardless and slew the dragons. Still there must have been some occasions, which did not appeal to the story tellers as good material, when the hero, lost in his adversary’s fog, suddenly found the dragon on his neck and became a casualty. 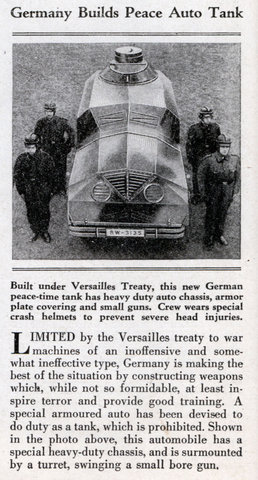 Germany Builds Peace Auto Tank
LIMITED by the Versailles treaty to war machines of an inoffensive and somewhat ineffective type, Germany is making the best of the situation by constructing weapons which, while not so formidable, at least inspire terror and provide good training. A special armoured auto has been devised to do duty as a tank, which is prohibited. Shown in the photo above, this automobile has a special heavy-duty chassis, and is surmounted by a turret, swinging a small bore gun. 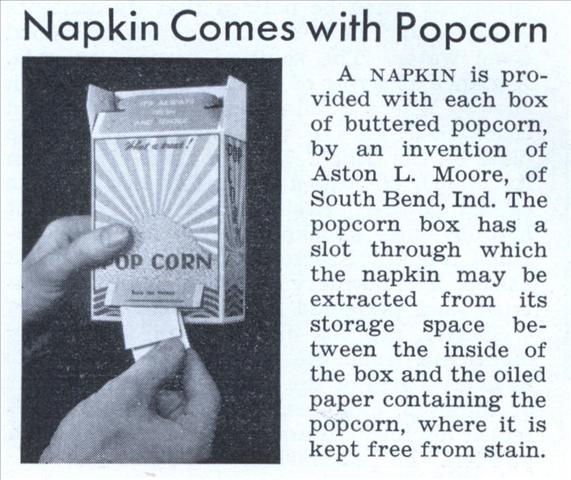 Napkin Comes with Popcorn
A napkin is provided with each box of buttered popcorn, by an invention of Aston L. Moore, of South Bend, Ind. The popcorn box has a slot through which the napkin may be extracted from its storage space between the inside of the box and the oiled paper containing the popcorn, where it is kept free from stain.

Pigeons Are Bred with Camouflage for War Service (Jan, 1941) 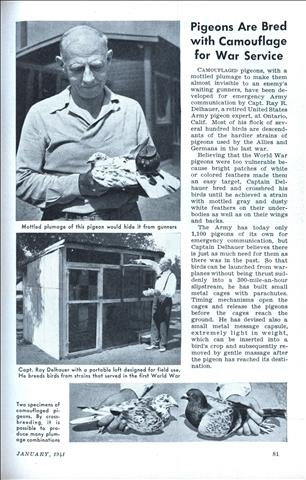 Pigeons Are Bred with Camouflage for War Service

Camouflaged pigeons, with a mottled plumage to make them almost invisible to an enemy’s waiting gunners, have been developed for emergency Army communication by Capt. Ray R. Delhauer, a retired United States Army pigeon expert, at Ontario, Calif. Most of his flock of several hundred birds are descendants of the hardier strains of pigeons used by the Allies and Germans in the last war.

What helmet? All I see is shrubs. With binoculars. 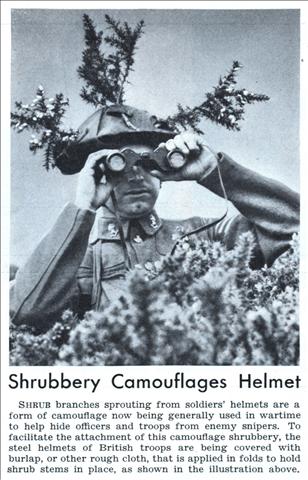 Shrub branches sprouting from soldiers’ helmets are a form of camouflage now being generally used in wartime to help hide officers and troops from enemy snipers. To facilitate the attachment of this camouflage shrubbery, the steel helmets of British troops are being covered with burlap, or other rough cloth, that is applied in folds to hold shrub stems in place, as shown in the illustration above. 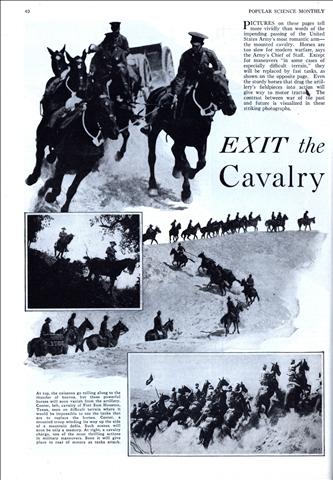 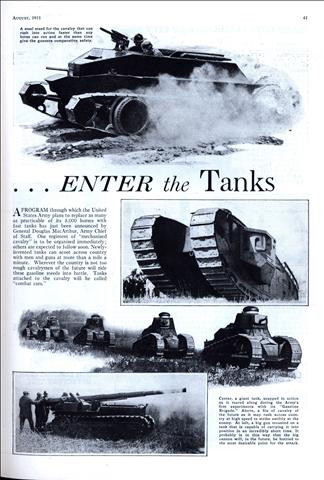 EXIT the Cavalry… ENTER the Tanks

PICTURES on these pages tell more vividly than words of the impending passing of the United States Army’s most romantic armâ€” the mounted cavalry. Horses are too slow for modern warfare, says the Army’s Chief of Staff. Except for maneuvers “in some cases of especially difficult terrain,” they will be replaced by fast tanks, as shown on the opposite page. Even the sturdy horses that drag the artillery’s fieldpieces into action will give way to motor tractor. The contrast between war of the past and future is visualized in these striking photographs. 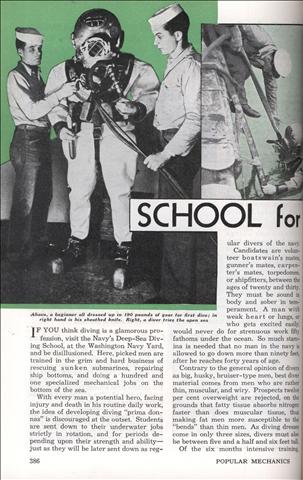 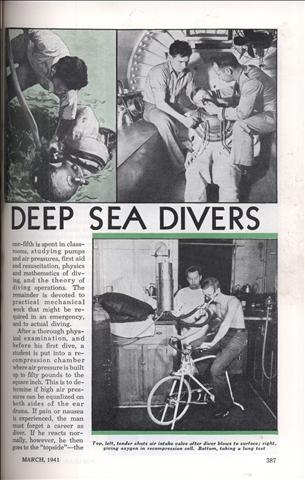 IF YOU think diving is a glamorous profession, visit the Navy’s Deep-Sea Diving School, at the Washington Navy Yard, and be disillusioned. Here, picked men are trained in the grim and hard business of rescuing sunken submarines, repairing ship bottoms, and doing a hundred and one specialized mechanical jobs on the bottom of the sea.

With every man a potential hero, facing injury and death in his routine daily work, the idea of developing diving “prima donnas” is discouraged at the outset. Students are sent down to their underwater jobs strictly in rotation, and for periods depending upon their strength and abilityâ€” just as they will be later sent down as regular divers of the navy.