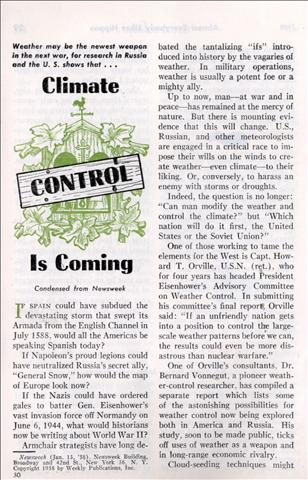 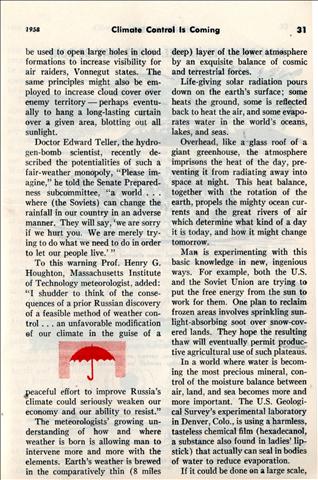 You would need to drop an absurd number of these to have any chance at all of actually hitting a sub. 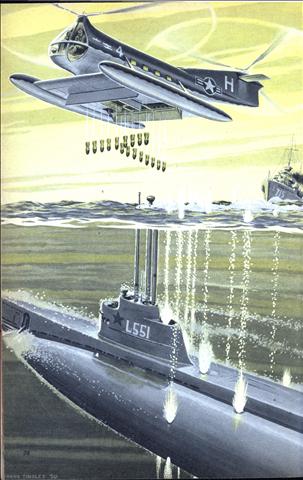 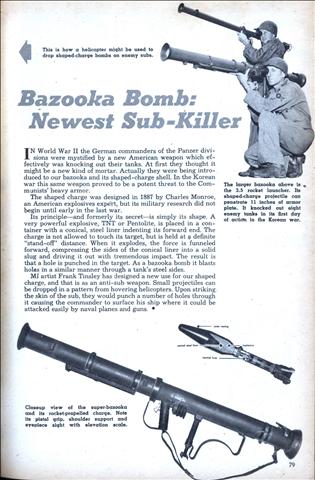 IN World War II the German commanders of the Panzer divisions were mystified by a new American weapon which effectively was knocking out their tanks. At first they thought it might be a new kind of mortar. Actually they were being introduced to our bazooka and its shaped-charge shell. In the Korean war this same weapon proved to be a potent threat to the Communists’ heavy armor.

The article that forecast “bat wings” was posted here 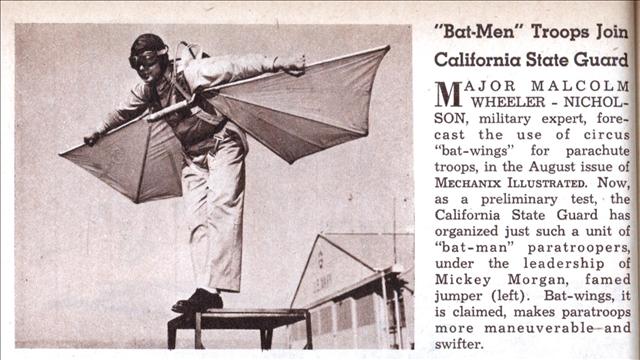 Major MALCOM WHEELER – NICHOLSON, military expert, forecast the use of circus “bat-wings” for parachute troops, in the August issue of Mechanix Illustrated. Now, as a preliminary test, the California State Guard has organized just such a unit of “bat-man” paratroopers, under the leadership of Mickey Morgan, famed jumper (left). Bat-wings, it is claimed, makes paratroops more maneuverable-and swifter. 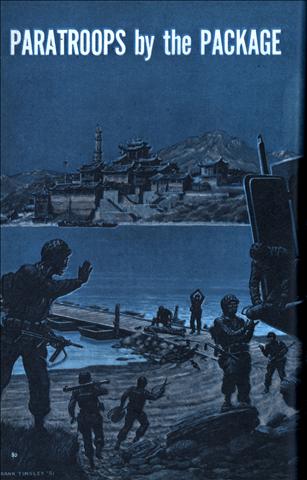 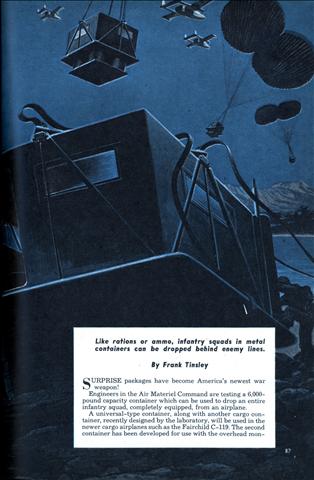 A universal-type container, along with another cargo container, recently designed by the laboratory, will be used in the newer cargo airplanes such as the Fairchild C-119. The second container has been developed for use with the overhead mon- orail of the C-119. Still in an early research and development stage, the universal container holds great promise. 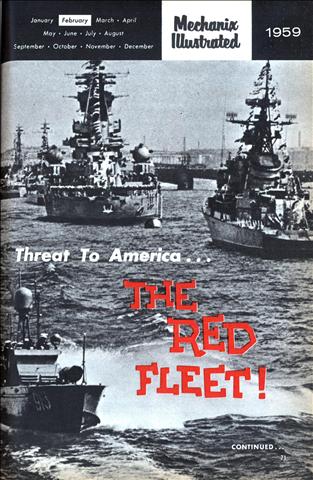 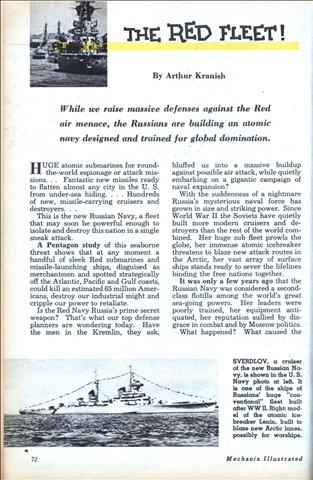 Threat To America… THE RED FLEET!

While we raise massive defenses against the Red air menace, the Russians are building an atomic navy designed and trained for global domination.

This is the new Russian Navy, a fleet that may soon be powerful enough to isolate and destroy this nation in a single sneak attack. 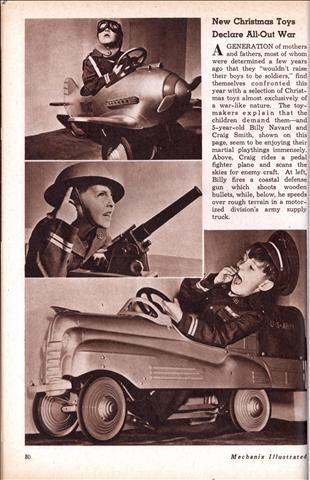 A GENERATION of mothers and fathers, most of whom were determined a few years ago that they “wouldn’t raise their boys to be soldiers,” find themselves confronted this year with a selection of Christmas toys almost exclusively of a war-like nature. The toy-makers explain that the children demand them—and 5-year-old Billy Navard and Craig Smith, shown on this page, seem to be enjoying their martial playthings immensely. Above, Craig rides a pedal fighter plane and scans the skies for enemy craft. At left, Billy fires a coastal defense gun which shoots wooden bullets, while, below, he speeds over rough terrain in a motorized division’s army supply truck. 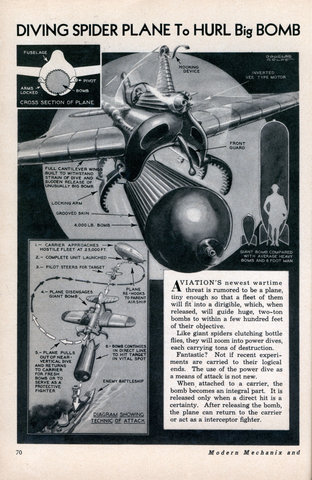 AVIATION’S newest wartime l threat is rumored to be a plane, tiny enough so that a fleet of them will fit into a dirigible, which, when released, will guide huge, two-ton bombs to within a few hundred feet of their objective.

Like giant spiders clutching bottle flies, they will zoom into power dives, each carrying tons of destruction.

Fantastic? Not if recent experiments are carried to their logical ends. The use of the power dive as a means of attack is not new.

When attached to a carrier, the bomb becomes an integral part. It is released only when a direct hit is a certainty. After releasing the bomb, the plane can return to the carrier or act as a interceptor fighter. 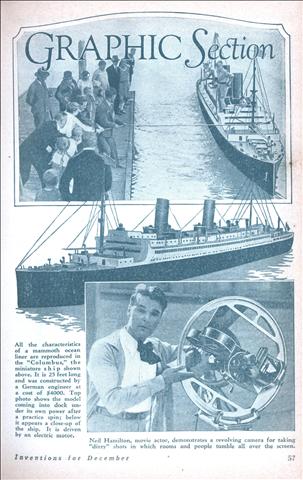 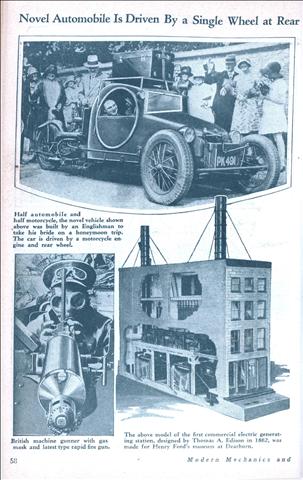 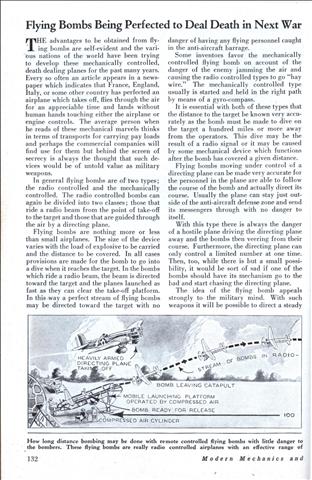 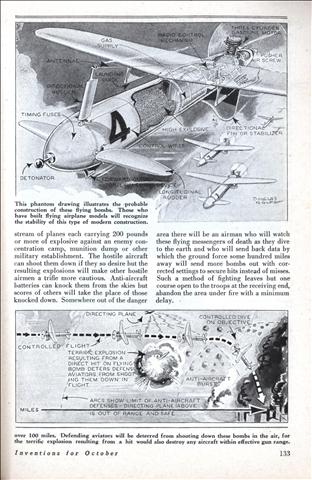 THE advantages to be obtained from flying bombs are self-evident and the various nations of the world have been trying to develop these mechanically controlled, death dealing planes for the past many years. Every so often an article appears in a newspaper which indicates that France, England, Italy, or some other country has perfected an airplane which takes off, flies through the air for an appreciable time and lands without human hands touching either the airplane or engine controls. 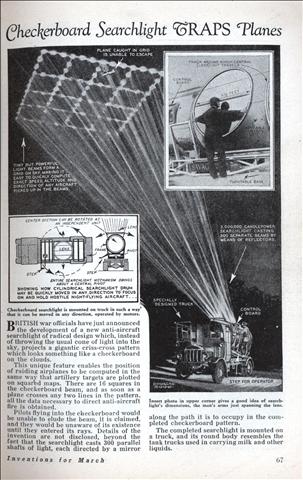 BRITISH war officials have just announced the development of a new anti-aircraft searchlight of radical design which, instead of throwing the usual cone of light into the sky, projects a gigantic criss-cross pattern which looks something like a checkerboard on the clouds.