Science And Mechanics
Issue: Jun, 1935
Posted in: Automotive
No Comments on Causes of Accidents (Jun, 1935)

Interestingly this is about the same number of auto fatalities that the U.S. had in 2009 even though I’m sure the number of miles driven was vastly higher. 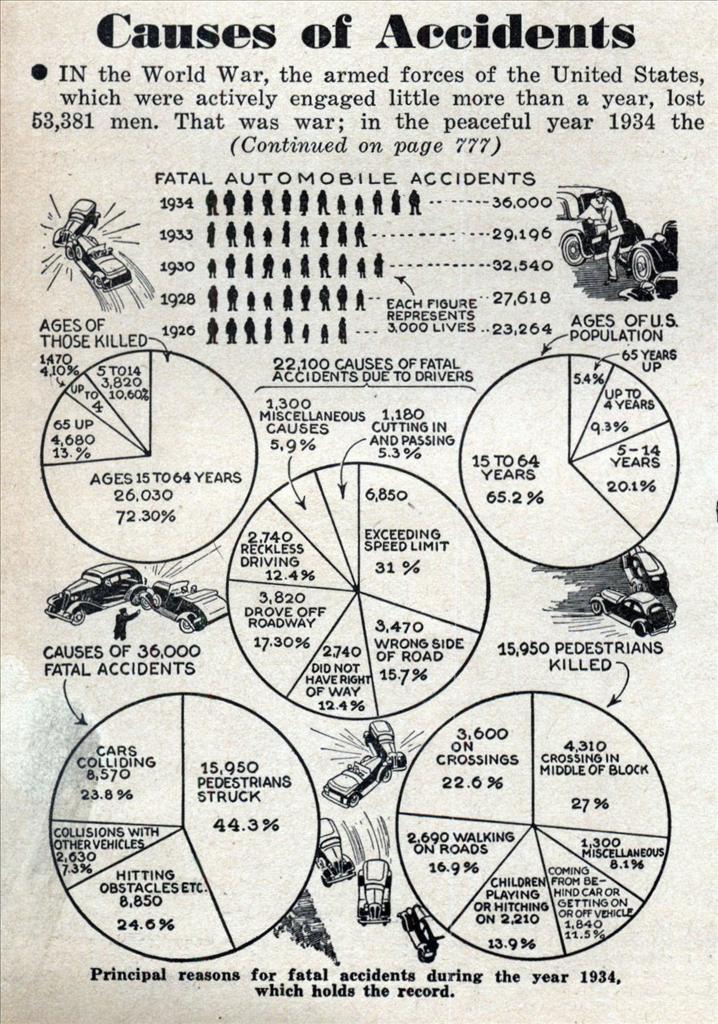 IN the World War, the armed forces of the United States, which were actively engaged little more than a year, lost 53,381 men. That was war; in the peaceful year 1934 the United States lost 36,000 men, women and children, killed in automobile accidents. The accompanying illustration shows the facts diagrammatically. It will be observed that the percentage of victims over 65 years old is twice as high as the number of such old people in the whole population; while the number of children under 14 killed is little more than half their proportion in the population. This is due to the fact that, among all the accidents which take place, a larger proportion are fatal to old people who, probably, have less vitality than children.

We are told that “crossing in the middle of the block” contributes greatly to the number of deaths; but it is not much more hazardous than crossing in the right place. In addition to this, many deaths are due to the fact that pedestrians and motorists have to share the same roadway, outside of towns.

Concerned by these figures, the Travelers Insurance Company has issued a striking booklet entitled “Thou Shalt Not Kill,” pointing out that the situation is getting worse and that action must be taken. “The main reason for so great an increase in deaths is because many motorists drive too fast much of the time”; in other words, too fast for the conditions about them, even though the figure of safe speed has increased many miles per hour since the horse-and-buggy days. Furthermore, the highest percentage of deaths from a given type of accident was that in which the car was going straight ahead—31,500 deaths in 697,000 cases (or 4.5%) as against 4,500 deaths in the other 185,000 accidents (2.4%).

In other words, there are many safety measures which can be devised by engineers to make traffic safer, but none of them deal with the human element that will always drive a little faster than is safe.