Of course Cellular City sounds like the name of a crappy cell phone kiosk. 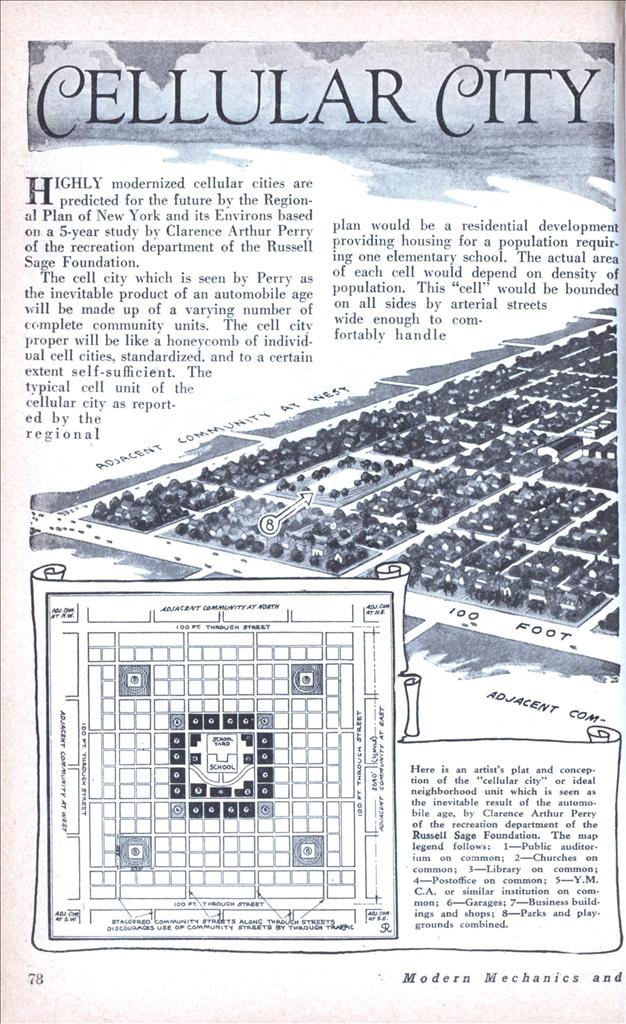 HIGHLY modernized cellular cities are predicted for the future by the Regional Plan of New York and its Environs based on a 5-year study by Clarence Arthur Perry of the recreation department of the Russell Sage Foundation.

The cell city which is seen by Perry as the inevitable product of an automobile age will be made up of a varying number of complete community units. The cell city-proper will be like a honeycomb of individual cell cities, standardized, and to a certain extent self-sufficient. The typical cell unit of the cellular city as reported by the regional plan would be a residential development providing housing for a population requiring one elementary school. The actual area of each cell would depend on density of population. This “cell” would be bounded on all sides by arterial streets wide enough to comfortably handle all through traffic. The “cell” would include its own system of small parks and recreational spaces, large enough to accommodate the population of the cell only.

Sites for the school, postoffice and other service institutions would be grouped in the center of the “cell.” One or more shopping districts adequate to serve the population of the neighborhood unit Would be located in the circumference of the “cell,” preferably at the traffic junctions and adjacent to similar districts of adjoining neighborhoods each laid out on the same general scheme.

The unit should be provided with a special street system, each highway being designed to facilitate circulation.