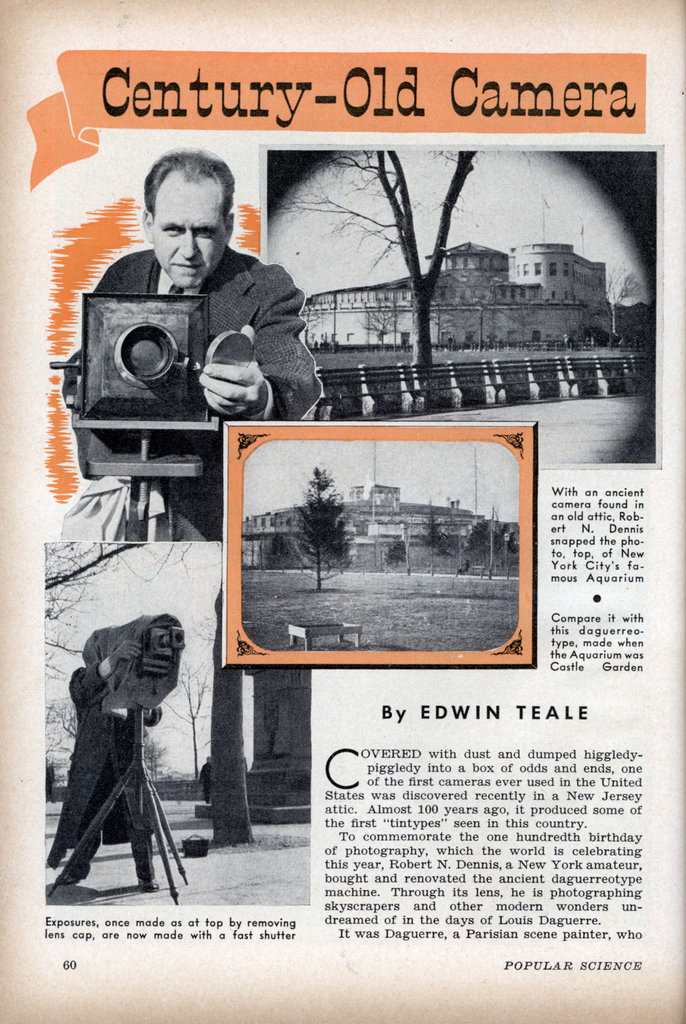 COVERED with dust and dumped higgledy-piggledy into a box of odds and ends, one of the first cameras ever used in the United States was discovered recently in a New Jersey attic. Almost 100 years ago, it produced some of the first “tintypes” seen in this country.

To commemorate the one hundredth birthday of photography, which the world is celebrating this year, Robert N. Dennis, a New York amateur, bought and renovated the ancient daguerreotype machine. Through its lens, he is photographing skyscrapers and other modern wonders undreamed of in the days of Louis Daguerre.

It was Daguerre, a Parisian scene painter, who startled the world, 100 years ago, with the announcement that he had succeeded in “painting with light.” In the ten amazing decades that have followed, photography, the art which he introduced, has risen to a position of first importance. This advance is dramatized by Dennis’s pictures.

With its huge lens, its brass fittings, and its heavy wooden body, the pioneer picture-making mechanism he is using weighs as much as an average eight-year-old child. It is equipped with two hinged doors which permit the insertion and removal of plates or cut film. To focus the camera, the operator turns a crank on the right-hand side of the box. This moves an inner sliding shell to carry the film nearer or farther from the lens.

Almost as odd as the camera itself is the tripod which supports it. The three legs are ornate with beads, evidently the product of a furniture lathe. At the top of the central supporting column is the great-granddaddy of all tilt-tops. Two flat wooden sections are hinged at one end. The camera rests on the top section, prevented from sliding off by molding running around three sides of the support. Projecting up through the lower section, at the end opposite the hinges, is a long wooden thumbscrew. By turning this, the operator can lift the end of the top section, pointing the camera down, orâ€”when the lens is facing in the other directionâ€”up, at any desired angle.

Originally, the ancient camera was equipped with neither a shutter nor a diaphragm. Picture-making plates of its day were so slow that exposures were made by removing and replacing the lens cap. A few seconds one way or the other made little difference. How little was known about exposure in these early days is indicated by instructions which appeared in “The American Repository,” when that magazine published a report on the new Daguerre camera in March 1840. One line read: “Give an exposure of from two to six seconds on brilliant, clear days when the sky is very deep blue and the wind is from the west or northwest.” When the wind blew from another direction, a different exposure was suggested!

In order to use fast modern film in the old camera, Dennis has added a diaphragm, and a shutter which permits snapshots of a twenty-fifth of a second or less. Otherwise, the outfit is exactly the same as it was when used for the first time, nearly a century ago. Transporting the giant box camera in an automobile, and taking along a friend to help set it up, Dennis has recorded through the ancient lens clear pictures of the New York skyline, of ships going down to the harbor, of metropolitan landmarks that were in existence when Daguerre made his long-ago announcement and the art of photography was born.

The story of that announcement and of the years of struggle that preceded it is an epic of human courage. It is also a tale of lone-handed research rarely equalled in history. In the very year that the French Revolution began, Louis Jacques Mande Daguerre was born in a little village near the mouth of the Seine. As a child, he ran neglected and ragged through the streets. Setting out for Paris as a young man, he entered the capital almost penniless and without friends. Yet, by native ability alone, he soon became the leading scene painter of the French stage. His mechanical effects were the talk of the town. He was growing wealthy and famous, when he retired to a little home laboratory to spend nights and days mixing ill-smelling chemicals and fitting together curious mechanisms.

His wife feared he was losing his mind and consulted a physician. His friends lamented the end of his brilliant career. Yet, with money dwindling, Daguerre kept on year after year seeking to realize a seemingly impossible dream. Oftentimes, in his work as a painter, he had used the “camera obscura,” a light-tight box equipped with a lens and viewing screen. This device had been introduced centuries before by the Italian philosopher, Giambattista della Porta. The dream of Daguerre was to make permanent the images he saw on the viewing screen.

Other experimenters had tried to achieve the same end, with scant success. A retired soldier who had fought with Napoleon in the Italian campaign, Joseph Niepce, had actually obtained a faint image of a pigeon coop by using a metal plate coated with asphalt dissolved in sweet-smelling oil of lavender. But the exposure had lasted from morning until night.

Daguerre tried iodized silver plates. They, too, demanded unpractically long exposures. When, apparently, he had wasted years of his life, a stroke of luck brought success. He had tossed a plate that showed only the faintest trace of an image into the cabinet where his chemicals were stored. The next day, he was dumfounded to see a perfect image on the sheet of metal. He put another underexposed plate in the cupboard. Again, after a lapse of twenty-four hours, the image became distinct. There were dozens of chemicals in the magic cabinet. Which one was bringing out the image ?

One by one, Daguerre made tests with each of them. Finally, he traced the effect to the fumes of spilled mercury. It brought out the latent image and made the long exposures of the past unnecessary. That accidental discovery enabled Daguerre to cut the exposure time from hours to minutes and make photography practicable.

Now, a century later, photography has become a leading hobby of the world. In this country alone, more than 15,000,000 cameras are in use. But none of them, it is safe to say, is stranger than the huge apparatus with which the New York amateur, Robert N. Dennis, is carrying on his one-man celebration of Daguerre’s dramatic achievement.