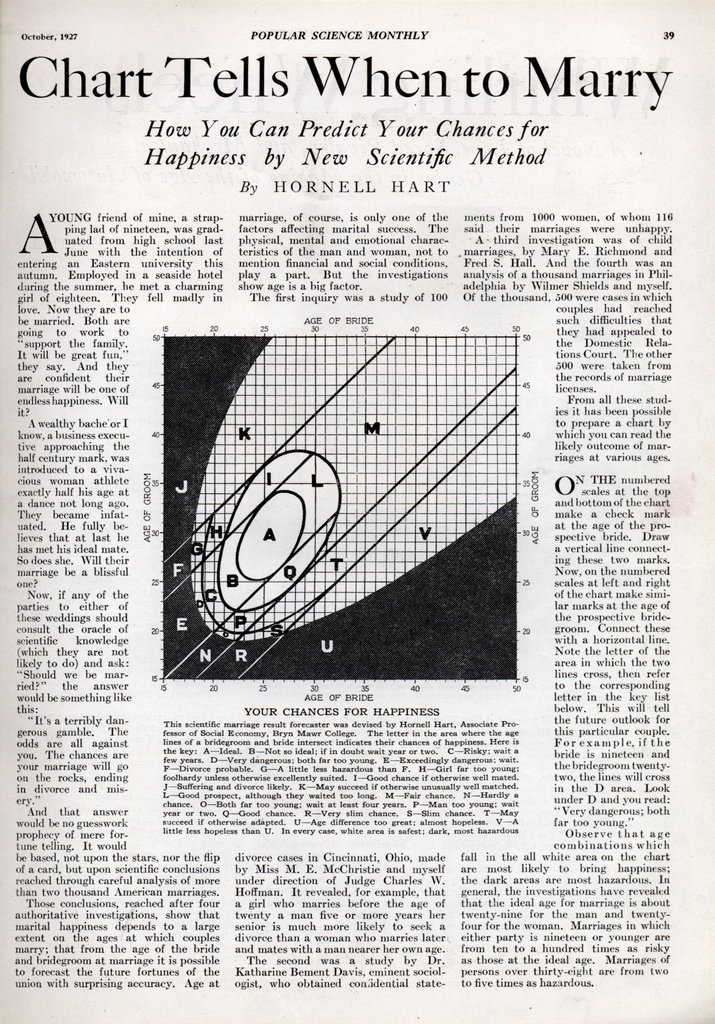 Chart Tells When to Marry

A YOUNG friend of mine, a strapping lad of nineteen, was graduated from high school last June with the intention of entering an Eastern university this autumn. Employed in a seaside hotel during the summer, he met a charming girl of eighteen. They fell madly in love. Now they are to he married. Both are going to work to “support the family. It will be great fun,” they say. And they are confident their marriage will he one of endless happiness. Will it? A wealthy bachelor I know, a business executive approaching the half century mark, was introduced to a vivacious woman athlete exactly half his age at a dance not long ago. They became infatuated. He fully believes that at last he has met his ideal mate. So does she. Will their marriage be a blissful one?

Now, if any of the parties to either of these weddings should consult the oracle of scientific knowledge (which they are not likely to do) and ask: “Should we be married?” the answer would be something like this:

“It’s a terribly dangerous gamble. The odds are all against you. The chances are your marriage will go on the rocks, ending in divorce and misery.”

And that answer would be no guesswork prophecy of mere fortune telling. It would be based, not upon the stars, nor the flip of a card, but upon scientific conclusions reached through careful analysis of more than two thousand American marriages.

Those conclusions, reached after four authoritative investigations, show that marital happiness depends to a large extent on the ages at which couples marry; that from the age of the bride and bridegroom at marriage it is possible to forecast the future fortunes of the union with surprising accuracy. Age at marriage, of course, is only one of the factors affecting marital success. The physical, mental and emotional characteristics of the man and woman, not to mention financial and social conditions, play a part. But the investigations show age is a big factor.

The first inquiry was a study of 100 divorce cases in Cincinnati, Ohio, made by Miss M. E. McChristie and myself under direction of Judge Charles W. Hoffman. It revealed, for example, that a girl who marries before the age of twenty a man five or more years her senior is much more likely to seek a divorce than a woman who marries later and mates with a man nearer her own age. The second was a study by Dr. Katharine Bement Davis, eminent sociologist, who obtained confidential statements from 1000 women, of whom 116 said their marriages were unhappy. A third investigation was of child marriages, by Mary E. Richmond and Fred S. Hall. And the fourth was an analysis of a thousand marriages in Philadelphia by Wilmer Shields and myself. Of the thousand, 500 were cases in which couples had reached such difficulties that they had appealed to the Domestic Relations Court. The other 500 were taken from the records of marriage licenses.

From all these studies it has been possible to prepare a chart by which you can read the likely outcome of marriages at various ages.

ON THE numbered scales at the top and bottom of the chart make a check mark at the age of the prospective bride. Draw a vertical line connecting these two marks. Now, on the numbered scales at left and right of the chart make similar marks at the age of the prospective bridegroom. Connect these with a horizontal line. Note the letter of the area in which the two lines cross, then refer to the corresponding letter in the key list below. This will tell the future outlook for this particular couple. For example, if the bride is nineteen and the bridegroom twenty-two, the lines will cross in the D area. Look under D and you read:

“Very dangerous; both far too young.”

Observe that age combinations which fall in the all white area on the chart are most likely to bring happiness;

the dark areas are most hazardous. In general, the investigations have revealed that the ideal age for marriage is about twenty-nine for the man and twenty-four for the woman. Marriages in which either party is nineteen or younger are from ten to a hundred times as risky as those at the ideal age. Marriages of persons over thirty-eight are from two to five times as hazardous.

YOUR CHANCES FOR HAPPINESS