Popular Mechanics
Issue: Feb, 1935
Posted in: Movies
No Comments on CHEATING DEATH for a LIVING (Feb, 1935)

Very interesting article by one of the original Hollywood stunt men. It certainly seems like this was an even more extreme profession in the early days:

“I had to wear the blood-spattered clothes in which Jack Silverâ€””Old Silvertip”â€”died the day before I did his stunt. It was a leap from a train crossing a trestle to the water beneath. Hesitating a fraction of a second, Silvertip had struck pilings on the far side of the stream and been killed. We must not hesitate.” 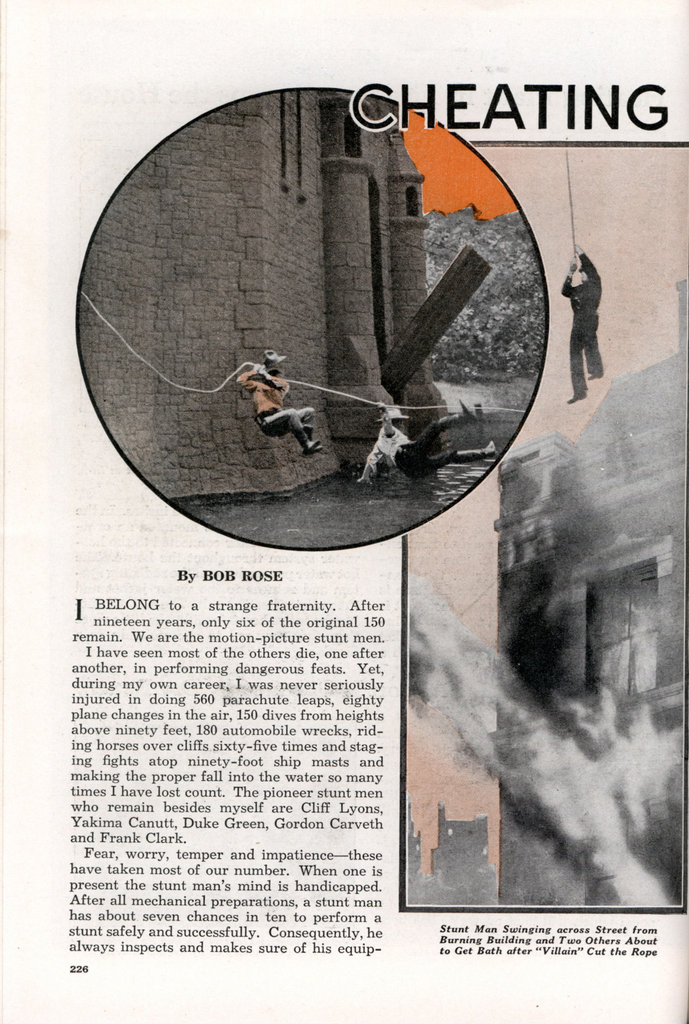 CHEATING DEATH for a LIVING

I BELONG to a strange fraternity. After nineteen years, only six of the original 150 remain. We are the motion-picture stunt men.

I have seen most of the others die, one after another, in performing dangerous feats. Yet, during my own career I was never seriously injured in doing 560 parachute leaps, eighty plane changes in the air, 150 dives from heights above ninety feet, 180 automobile wrecks, riding horses over cliffs sixty-five times and staging fights atop ninety-foot ship masts and making the proper fall into the water so many times I have lost count. The pioneer stunt men who remain besides myself are Cliff Lyons, Yakima Canutt, Duke Green, Gordon Carveth and Frank Clark.

Fear, worry, temper and impatienceâ€”these have taken most of our number. When one is present the stunt man’s mind is handicapped. After all mechanical preparations, a stunt man has about seven chances in ten to perform a stunt safely and successfully. Consequently, he always inspects and makes sure of his equipment. His most necessary assets to overcome the remaining three points of hazard are experience and mental balance.

A mistaken idea is that a trained athlete has all the qualifications to make a stunt man. Overtraining and routine slow the mental faculties. Where the athlete practices one thing until he is perfect in it, the stunt man must never fall into the habit of doing things mechanically. Though great muscular development is not important, perfect physical condition is.

Successful stunt men are credited with having great nerve. They have.

But it is not the nerve of the short-lived fool who is merely inviting death. It is the controlled nerve that steadies the mind while the feat is being executed. If I have cheated death where others failed, it is not because of luck or because I am physically superior. It is because I adhered to the teachings of the first and greatest of all stunt men â€” Harry Houdini. He taught me these fundamentals: “Do every stunt scientifically. Never depend on nerve or luck. Don’t attempt a stunt if you are afraid.” Sometimes the death of a fellow stunt man strikes close to home. I had to wear the blood-spattered clothes in which Jack Silverâ€””Old Silvertip”â€”died the day before I did his stunt. It was a leap from a train crossing a trestle to the water beneath. Hesitating a fraction of a second, Silvertip had struck pilings on the far side of the stream and been killed. We must not hesitate.

One of “Red” Thompson’s celebrated stunts was to jump from a speedboat to the back of a whale and harpoon it. Retiring from the business, Red returned again only to exemplify the stunt man’s superstition. Stunt men believe that to come back to the game after once quitting is sure death.

Red, with Jerome Bauten and Howard Daughters, met death in the Abercrombie rapids of Alaska’s Copper river. I was shooting the same rapids in another boat. Gordon Carveth was in the Thompson craft. The boat was caught in a terrific whirlpool and smashed on the huge bowlders and jagged ice. Struggling in the thirty-five-mile-an-hour current,

Carveth gained shore, missing the deadly bowlders that battered Thompson and the other two men to death. My own boat made shore and I raced along the bank, helpless to aid in their grim struggle.

What are my own ideas on this superstition about returning to the stunt game? I do not believe it is just idle superstition. Out of the profession for a time, a man loses the mental alertness that characterizes the successful stunt performer. On returning and undertaking a hazardous stunt, fear grips him as he suddenly realizes his sense of timing is lost. And in this state he is, of course, unable to execute the feat properly.

A stunt man must never rely on someone else. I did so once and almost lost my life. I was in a crow’s nest atop a tower surmounting a house which was to burn under me. The house was on a ninety-foot cliff overhanging the ocean. I was to escape the flames by falling into the ocean with the tower. To offset a stiff wind blowing in from the ocean, piano wire was strung from the tower top to a near-by boat. When the flames got too close, the tower was to be pulled seaward. Having been put up several days before, the wire had corroded from the salt water and I demanded new wire. I was told it already had been strung.

I began the stunt. The building burst into flames and studio men pulled the wire. Not having been renewed, it broke. The fire climbed higher toward me. I sighted a small inlet close to the tower. I could not leap into the ocean against the strong wind, but by jumping to one side, I had a chance to land in the inlet, though it was only eight feet across. Previous experience of high diving into small tanks saved me. Making a successful shallow dive, I suffered only scratches from barnacles.

In nineteen years, the only injuries I have suffered were a broken wrist, several broken ribs and a few sprains and bruises.

What was my most dangerous stunt?

That’s hard to decide. I remember though, the stunt which was the most strenuous. I contracted to do an original stuntâ€”making a parachute jump from a plane 5,000 feet up, with another plane catching my chute by means of a hook attached to a twenty-foot rope. First, I arranged a similar rope and hook from the rafter of a sixty-foot studio stage. To this I fastened a parachute, just as it would suspend from the hook in the actual stunt. For three weeks I trained strenuously by climbing the parachute shrouds, then over the hook and on up the rope.

When the stunt took place, I jumped with two chutesâ€”one for safety so if the hook tore loose I could descend with the other. As my parachute opened, the plane with the hook attached glided over me, pulled into a stall, hooked into my chute, then leveled out again. After assuring myself that the hook was secure, I began to climb the shroud cords. The weight of the second chute plus the strong wind caused me to twist and spin so much I couldn’t gain any headway. Throwing off the second chute, I started to climb the shroud cords again. But on reaching the silk portion, it was hard to get a grasp.

I began to tire and to consider myself foolish for dropping the second parachute. My only salvation was to climb and yet conserve all the strength I could. Finally, after what seemed hours, I managed to gain the hook. There I rested a few minutes. When at last I climbed from there up the rope and to the landing gear, I knew I had completed the most strenuous stunt in my career.