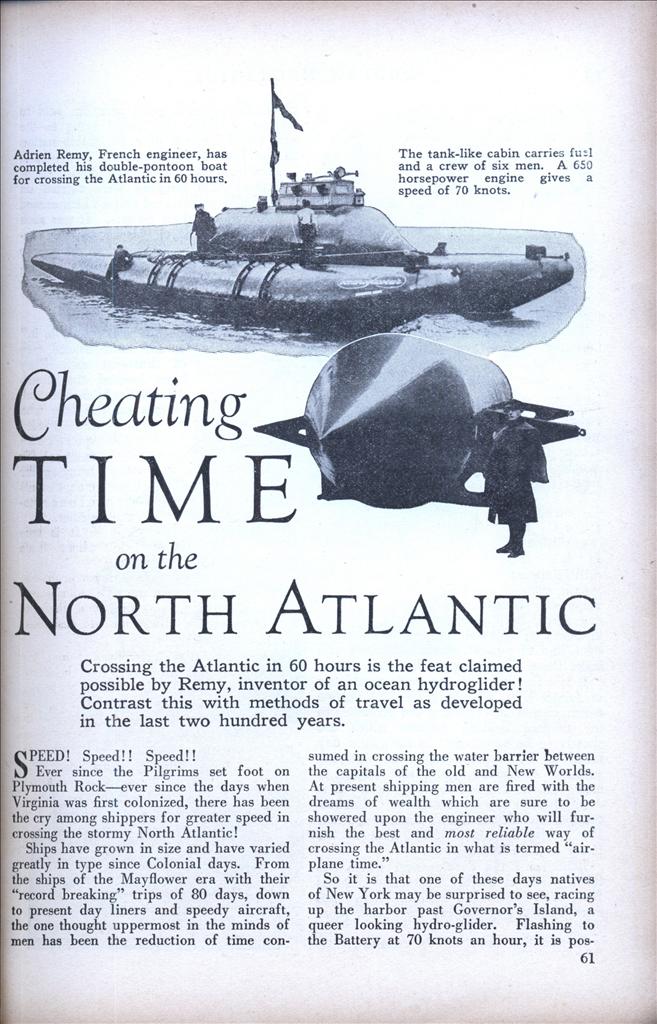 Cheating TIME on the North Atlantic

Crossing the Atlantic in 60 hours is the feat claimed possible by Remy, inventor of an ocean hydroglider! Contrast this with methods of travel as developed in the last two hundred years.

SPEED! Speed!! Speed!! Ever since the Pilgrims set foot on Plymouth Rock—ever since the days when Virginia was first colonized, there has been the cry among shippers for greater speed in crossing the stormy North Atlantic!

Ships have grown in size and have varied greatly in type since Colonial days. From the ships of the Mayflower era with their “record breaking” trips of 80 days, down to present day liners and speedy aircraft, the one thought uppermost in the minds of men has been the reduction of time consumed in crossing the water barrier between the capitals of the old and New Worlds. At present shipping men are fired with the dreams of wealth which are sure to be showered upon the engineer who will furnish the best and most reliable way of crossing the Atlantic in what is termed “airplane time.”

So it is that one of these days natives of New York may be surprised to see, racing up the harbor past Governor’s Island, a queer looking hydro-glider. Flashing to the Battery at 70 knots an hour, it is possible that this strange craft will dock in the New World but 60 hours from Cherbourg. Behind the actual accomplishment of this feat will be the romantic story of shipping development—the story of scudding sailing ships, hard driving masters, the story of colossal liners with hearts of steel, and of patient, obscure thinkers who make these advances possible.

It is a far cry from the crude machinery of James Watt, who built the first marine steam engine for crossing the Atlantic, to the modern floating palaces which are shortly to be superseded in their four day schedule by faster means of carrying precious documents, gold, and letters of state between the two world centers. It is a still further cry from ships of Columbus’ time, of Hendrik Hudson’s time, to the new R-100, the British dirigible, and to \he Remy surface hydro-glider.

Behind all the development which has taken place in cutting hours and minutes from inter-continental schedules there has ever been the urgent cry for speed, more speed!

Before the days of the trans-Atlantic cable, there was a great premium paid to owners of ships that could bring to the new world freights of a perishable nature in the lowest elapsed time. News, bank clearings, and the intricate documents of international banking were carried on specially constructed ships which earned fortunes for their owners. It was such competition which forced the development of the first steamers, and drove the less efficient sails from the seas. Speed, more speed!

Why? Because “there is money in it,” as the hard headed men of business say. They have learned that trans-Atlantic trade showers rich returns on the man who devises the quickest means for bringing the continents closer together.

It is true that the cable eased the burden of the ships somewhat, but after the cable had been laid and news was being rushed undersea with the speed of light, gold still had to be carried, international banking clearances were being held up pending arrival of money shipments at their destinations, and the formal processes of government were rendered all the more sluggish for each extra hour consumed in bringing m^il and express matter from one side to the other.

The building of such fast mail and passenger steamers as the Mauretania, the Olympic, Berengaria, and Leviathan seemed the ultimate in ocean transportation. When they were built, the airplane was a back lot toy. It was hardly worthy of even military recognition, and certainly not considered as a possible means for hopping the Atlantic with any degree of reliability.

Though airplanes have spanned the ocean, the fact remains that planes to- day have not developed to such an extent that they are reliable transports. Business will not yet trust valuable express matter and shipments of gold to airplanes. Though planes will cross the sea in 35 hours, they are not capable of carrying pay-loads reliably. For the present they are out of the picture as far as an improvement in trans-Oceanic express work is concerned.

But there is at present, actually built and ready for a trial trip, a queer design for a trans-oceanic speed boat which was constructed by Adrien Remy, a French engineer. Built on the banks of the Seine at the Saint-Ouens marine works, the odd craft was given her trials early this year at the little town of Javel. A proposed trip to prove her the ultimate type of trans-oceanic speed carrier is planned for the early winter.