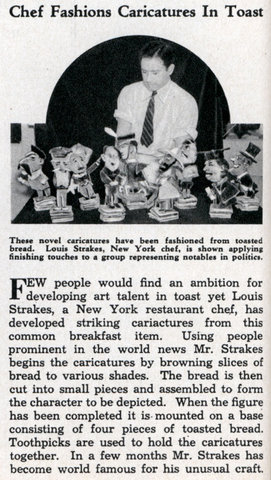 Chef Fashions Caricatures In Toast
FEW people would find an ambition for developing art talent in toast yet Louis Strakes, a New York restaurant chef, has developed striking cariactures from this common breakfast item. Using people prominent in the world news Mr. Strakes begins the caricatures by browning slices of bread to various shades. The bread is then cut into small pieces and assembled to form the character to be depicted. When the figure has been completed it is mounted on a base consisting of four pieces of toasted bread. Toothpicks are used to hold the caricatures together. In a few months Mr. Strakes has become world famous for his unusual craft.